Reviewed by Luschka on 21st January 2016 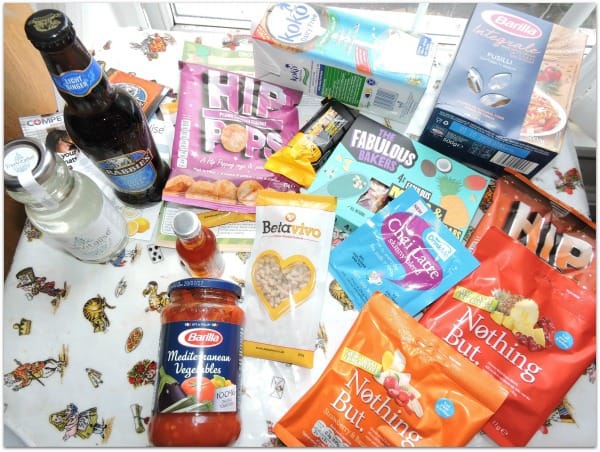 The Degusta subscription box is a lovely box for people who like to try new things, but wouldn’t necessarily walk through a supermarket putting things they hadn’t tried into their trolley. Each box contains food and drink products, leaflets advertising (and explaining) the more unusual products and an informational leaflet about everything in the box, their price value and a couple of recipe ideas.


The December box has a lot of what I would call ‘lunch box’ foods, and a few meal options.

For those who can’t do dairy, it’s really nice to have an alternative – in this case a coconut milk. This coconut milk works well as a milk replacement in breakfast cereals, tea and coffee and sweet or savoury cooking.

I was very pleasantly surprised by Nothing But. I’ve had a similar product before that was really not very nice, with each bite of fruit being drenched in oil, but these were absolutely delicious. Each bite captured the fresh and deep flavour of ripe fruit, the were crispy and simply delicious. I split one bag into two lunch boxes, and they were a lovely treat. They aren’t a filling snack, by any stretch of the imagination, but very tasty and they go a long way to curbing a sweet tooth.

The box contained a light ginger beer and a mini bar sized toffee vodka, with a recipe for mixing them into a cocktail.

Now, I don’t like Ginger Beer and never have, but I had a sip and it was okay. It tasted gingerish and was pleasant enough considering I don’t like ginger beer. When you mix the ginger beer and toffee Red Square, however, the result is fantastic! I would never have put these two together without the included recipe, but I absolutely loved it. The toffee cuts the Ginger Beer enough to that it’s almost like a ‘spiced’ toffee. Thoroughly delicious, with enough of a kick to not lead to regrets on a school night.

Now, this is an unusual product. I cannot tell you what it tastes like because there’s nothing to compare it to. It’s a really tasty product with no taste comparison! Apparently it’s tapped from tree bark with no damage to the tree, and it’s high in manganese. (I have no idea what that means!). I love the glass bottle, and the fact that it’s sustainably harvested.

Hip Pops are a soya and potato crisp that are low in saturated fats and a good source of protein, apparently.  More importantly they are delicious. Really strong flavours, mean you also really only need a few to fill the snack needs. The flavours are familiar crisp flavours like prawn cocktail and barbecue flavour, so you could easily swap to them and not feel like you’re missing out. Some of these have as little as 8% fat, which is a third of what regular crisps have.

Betavivo are heart shaped crispy oats that make a healthy breakfast, tasty if you like an oaty kind of breakfast.   Apparently this helps reduce cholesterol and blood sugar. Eat it with yoghurt or milk or as a snack it’s pretty good too.

The Fabulous Bakers are really fabulous breakfast bars. The one we received was mango and pineapple flavour, and it was really lovely – fruity, moist, delicious. I will be looking for these in the shops, for sure.

The Compete Energy Bites are… interesting. I can’t say that they are particularly delicious, but then at the same time you probably don’t want them to be, since they aren’t sweets. They have a pretty decent caffeine kick. The only thing I’d say I don’t like about them is the execcisve packaging. Each ‘bar’ contains two portions which are individually sealed in square containers that contain two little squares. It would bother me if I used them regularly.

The final products in the Degusta box were pasta and a jar of tomato and Mediterranean vegetables. There’s a recipe in the box for making the meal but I popped the two together with 500g mince into the slow cooker for a couple of hours and had a delicious, if not particularly photogenic meal.

If you’ve been considering Degustabox and are tempted by the delicious treats on offer in this month’s box, we have a special code which will give first-time subscribers a special price of only £5.99. Simply sign up here for your first Degustabox and enter the following code: ALLSUBSBOX.

A brilliant box for someone who enjoys trying new things, and wants to try them in sample portions.