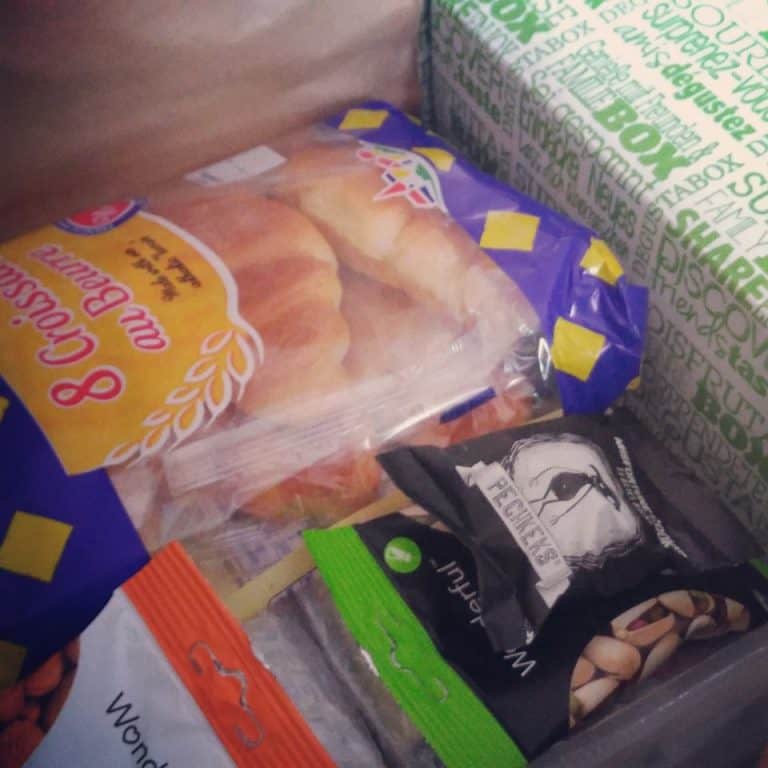 This month’s Degustabox was perfect for our holidays – it arrived as we were heading out the door, so we popped it in the car as is, and opened it up on a table outside a tent in France. It was quite amusing then, to find the box with loads of French goodies! 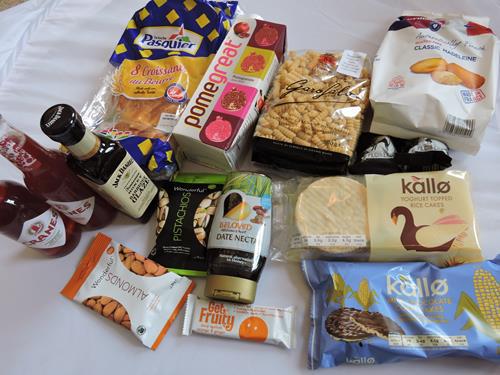 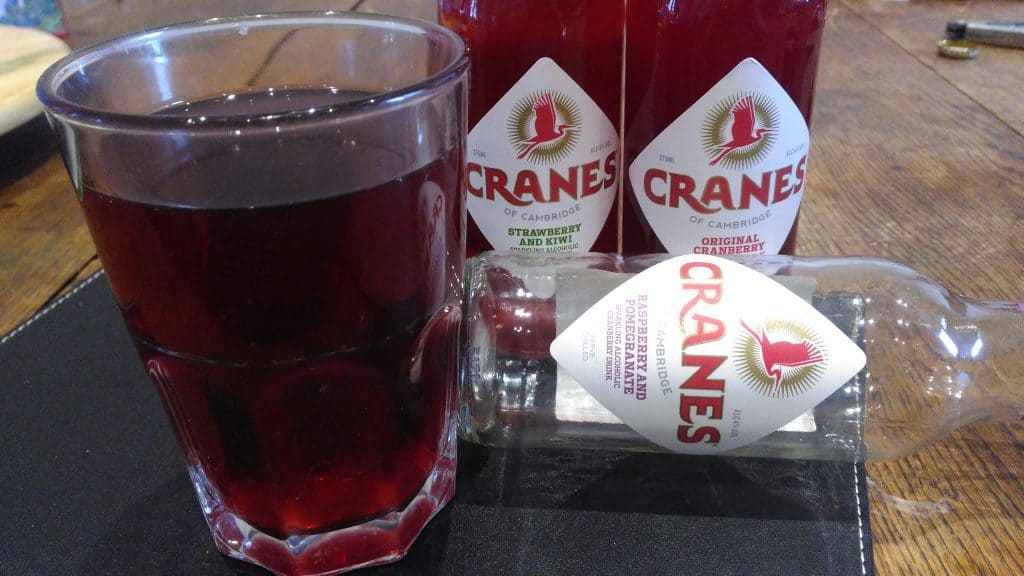 Like any good dinner date, we’ll start the Degustabox for May with the drinks. We received a few bottles of Cranes of Cambridge, an alcopop of the fruity variety. With 4% alcohol these drinks are brewed from cranberries with added juice, so you have Original Cranberry, Raspberry and Pomegranate and Strawberry and Kiwi.

They are refreshing drinks, perfect for summer, and with flavours that will really appeal to those who like a fruit drink. They also have added sweetener rather than sugar so come in at 99 calories per bottle.

The fruit flavours are quite delish, but if you’re not used to artificially sweetened drinks you will notice the sweetener after taste. If you already drink diet drinks you aren’t likely to notice. 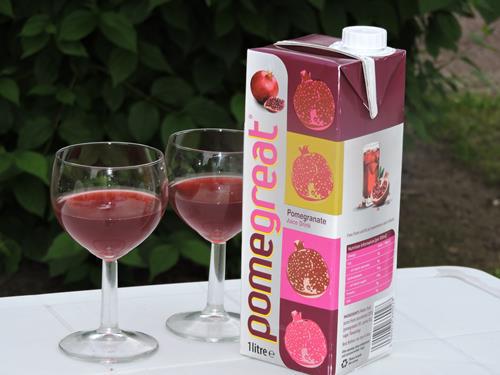 A fantastic alternative for anyone wanting to hide that they’re designated driver is the 1 litre juice from Pomegreat. It really is great. My kids were drinking it pretending they were having wine! I wish I could tell you what Pomegreat tastes like. If you buy ready shelled pomegranates in the supermarkets, you won’t be able to compare the flavours. It’s a flavour all of it’s own, specially since it’s enhanced with aronia juice and it is honestly one of my favourite drinks ever. You just feel healthier drinking it, and it’s delicious to boot. 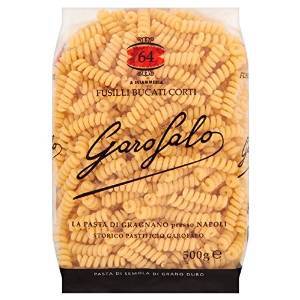 I find pasta so hard to review, because they all pretty much look and cook and taste the same to me. The Fusilli Bucati Corti corkscrew pasta from Garofalo is a case in point. It tastes just like pasta. This is a good thing! It’s quick to cook and is made from durum wheat. It holds it’s shape well, and goes as well with a rich sauce as it does a simple cheese sprinkling (the way my smallest prefers her pasta.) 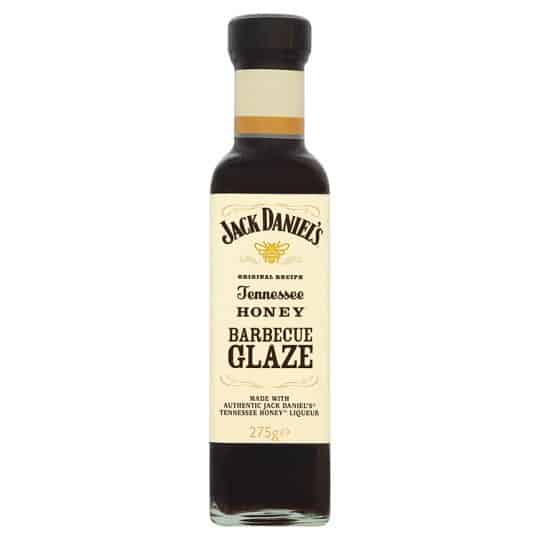 The Jack Daniel’s Tennessee Honey Barbecue Glaze is out of this world. It’s pretty much a visit to TGI Fridays, in a bottle. It’s so good.  The glaze is ‘infused with the soft flavours of the popular Jack Daniel’s Tennessee Honey Liqueur, giving the glaze a hint of honey and a delicious, smooth flavour’. You can basically chuck it in the slow cooker with chicken or pork or beef, and come back a few hours later to a delicious pot of awesome. (There was a recipe for something like this in the box, though my slow cooker had died, so I just used it as a stove top recipe without the slow cooking and still had a delicious – though not great to photograph!) meal from it.

In this month’s Degustabox, the sweets were Pechkeks fortune cookies, Get Fruity bars, Kallo corn cakes and a selection of nuts. 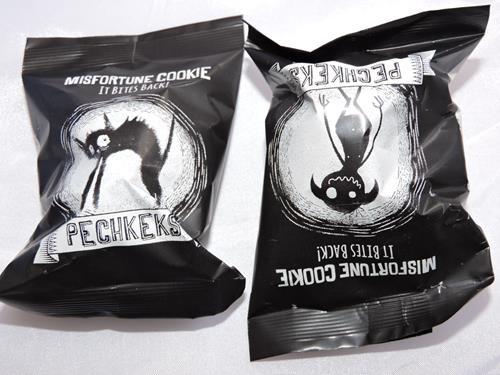 We had a box of Pechkeks fortune cookies before, so my kids were thrilled to receive these two in the box. Pechkeks are fortune cookies, just like you’d expect from your local Chinese – with two huge differences. For one thing, they are black in colour.  For another, they are MIS-fortune cookies. So you’d get fortunes like ‘The best days of your life are already behind you” or “I bet your parents asked you to run away from home”.  They’re great for a laugh around the Halloween dinner table, for sure. 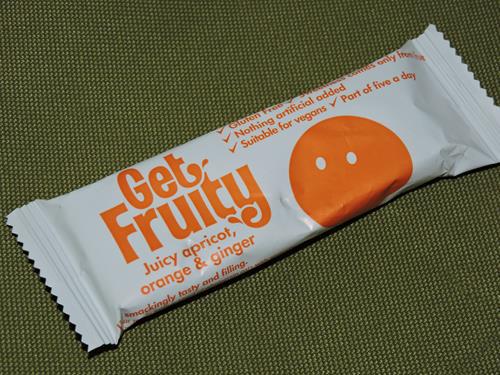 Get Fruity bars are pretty much exactly what they sound like. Fruit bars. They are naturally sweet, so they tick that sweet tooth box without having added sugar or anything. They are suitable for vegans, gluten free and nut free. They come in six flavours so you should be able to have one in the lunch box every day without getting tired of them. They do taste wonderfully fruity and care has obviously been taken in getting the flavour combinations just right. 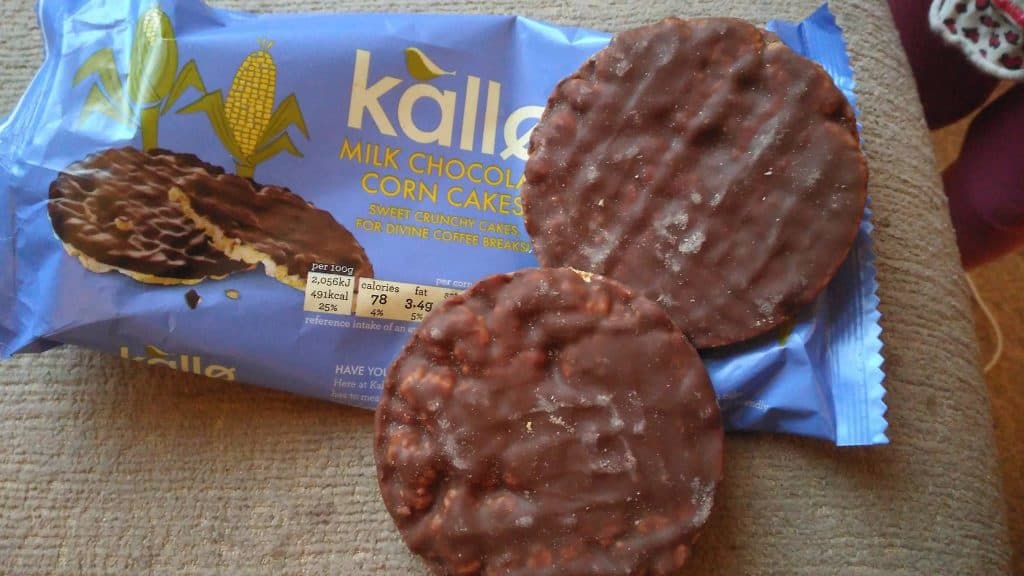 Kallo Corn Cakes are like their rice cake siblings, but made from corn. They are suitable for vegetarians and are also coeliac friendly. Each corn cake has 78 calories, and the hint of chocolate on top is enough to just curb the sweet tooth and leave you feeling satisfied. I’ve never been a fan of rice cakes, but I must say these are different. The corn bit is a little savoury with the chocolate topping and they are a sweet and salty treat. You can top them with fruit and cream for a tasty desert or just enjoy them as a snack as they are. 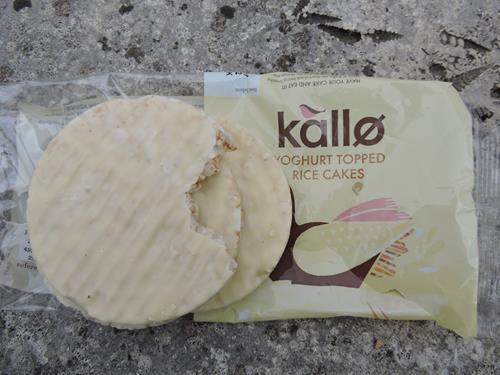 There’s also the yoghurt topped variety, which are just as good, if perhaps a little sweeter. We had these in my handbag for our travels around France and though the remains did crumble towards the end of the trip in the bottom of my handbag, they were really great for saving a few pennies on the constant snacking desires of two small children!

Also in the bag were the Wonderful Almonds and Wonderful Pistachios from The Wonderful Company. Again, really hard to review as they tasted like almonds and pistachios – again, a good thing. I did love the packets they came in for being perfect single portions. The almonds were sweet and mild and crunchy and could be used as is or in cooking. The pistachios were gorgeously salty, large and thoroughly enjoyed as a treat around the campfire. 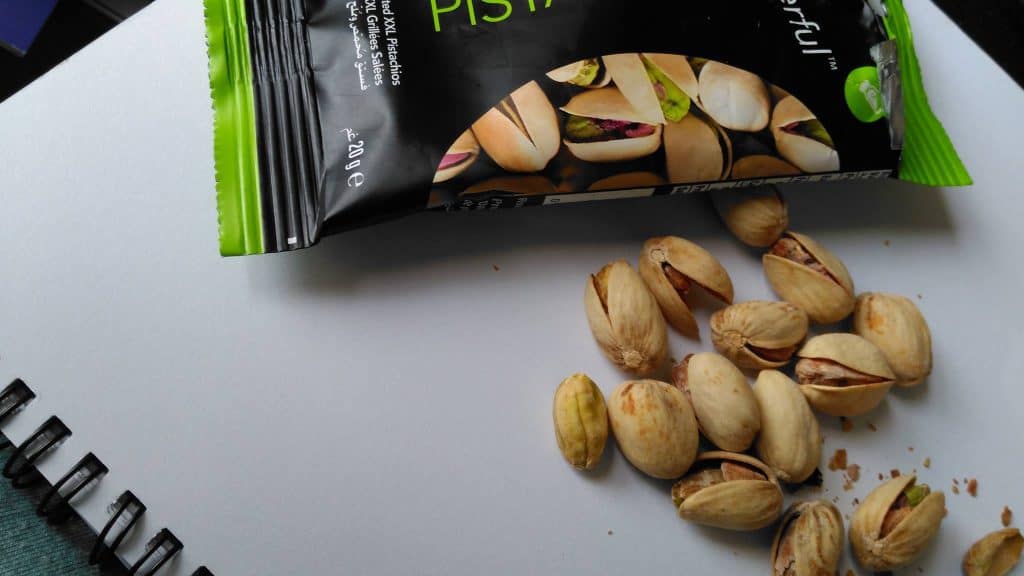 The Product of the Month for May were these Pasquier croissants, which were funny to be eating in France, but again, a much cheaper alternative to buying fresh all the time, these were great under the grill with some butter on crispy, misty camping mornings. There are two to a bag so you can keep the others fresh if you’re taking a few days to eat 8 croissants. My kids enjoyed these as is, but I liked them lightly toasted with butter. 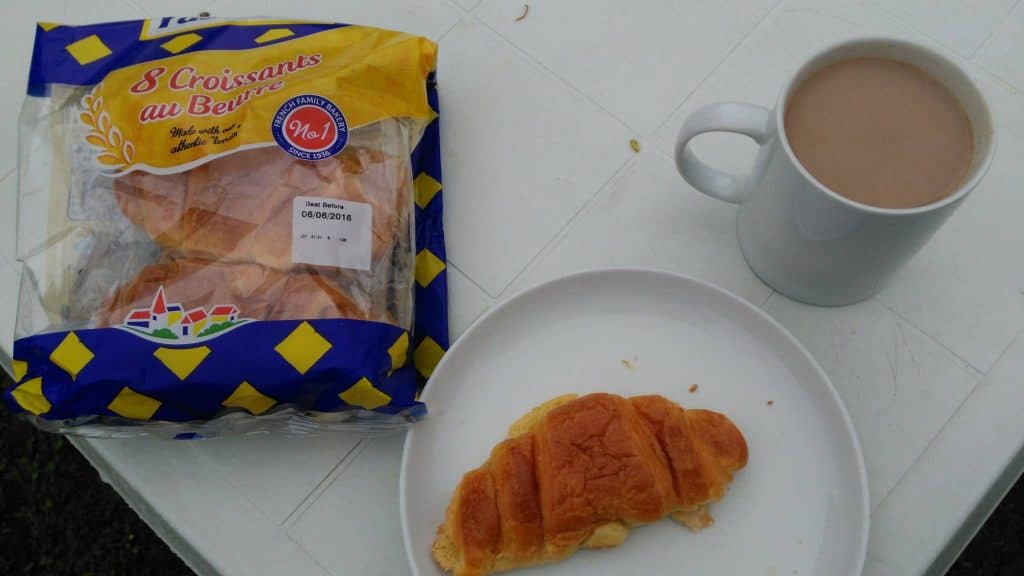 We did also receive a bag of Classic Madeline’s from Mrs Crimbles, but I have no idea what happened to it after I had the first one with my morning coffee! There was a suspicious amount of crumbs on the playroom floor though, and empty packets deep in the bin, so I have strong suspicions.  They were in individually wrapped packages which, if you’re buying for a family is a bit of a waste of packaging, really, but if you’re buying for one or two people is better as it keeps them fresh. 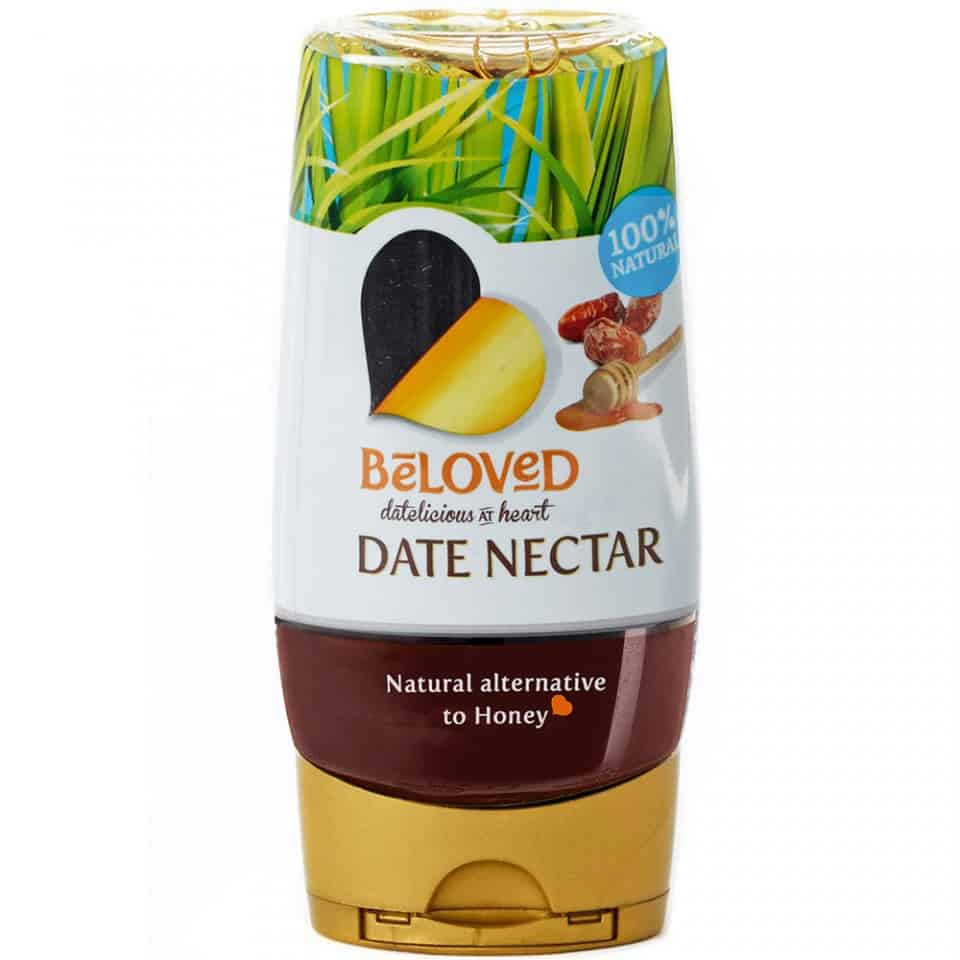 The final product in this month’s Degustabox was a bottle of Date Nectar, which is an entirely new one for me. It’s not very sweet, so if you’re looking for it to be a honey or syrup substitute that might take a little getting used to for the taste buds. It works in baking though, and is definitely worth considering if you’re looking for sugar substitutes.

Yet another fantastic box from Degustabox. There's a reason my kids practically tear it open when it arrives! Full of yummy treats, new foods and something we look forward to every month!