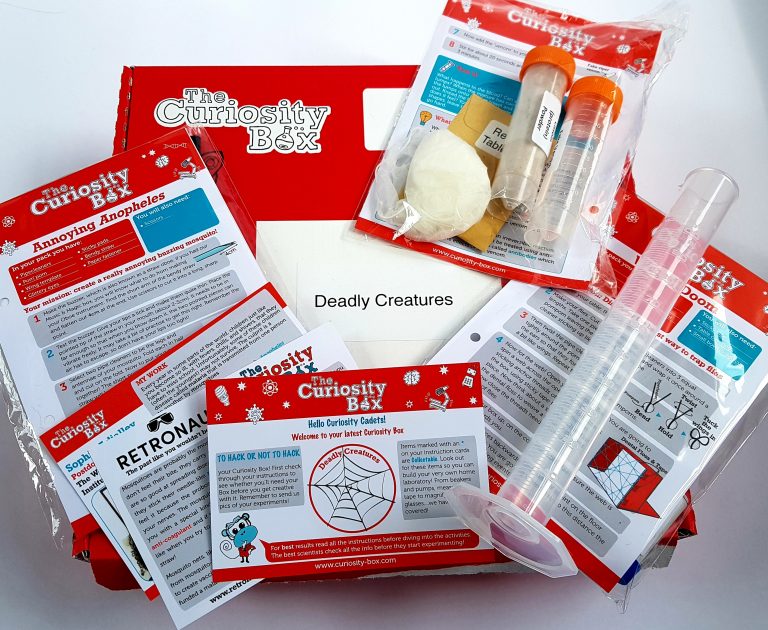 The Curiosity Box is a science subscription box that send you monthly boxes of themed science experiments for the whole family to enjoy. It costs from £16.95 per month plus p+p. Along with the experiments, you also build up a collection of science equipment to keep and use again.

Quick note: Usually my reviews of kids’ and family things show the process with me and my daughter, Little C. For various reasons we’ve not actually been able to do these experiments together yet. However I’ll show you everything in the box, and give my opinion as to how good it looks. Having done quite bit of stuff like this I think I can make a reasonable assessment!

This box is called Deadly Creatures. 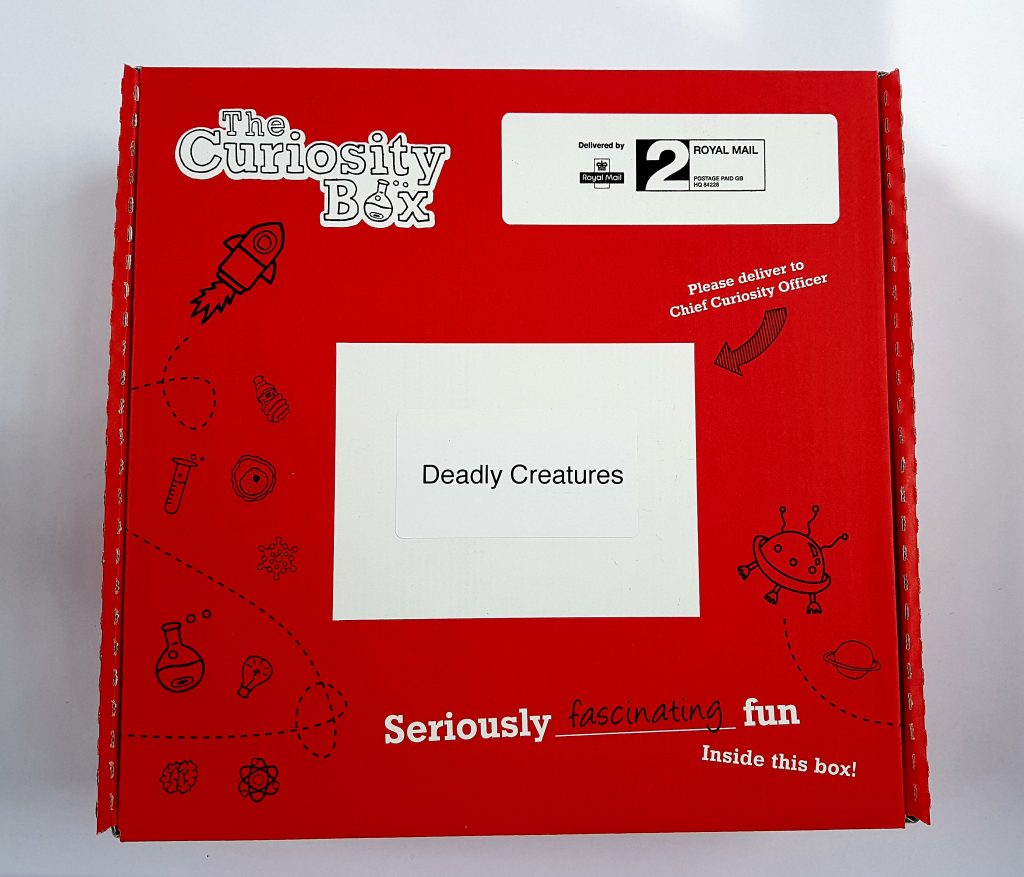 The box itself is pretty big!

Inside are three cards, which introduce you to the box theme, further information related to the theme, and also information about a featured scientist.

There are three experiments in the box, each neatly bagged. 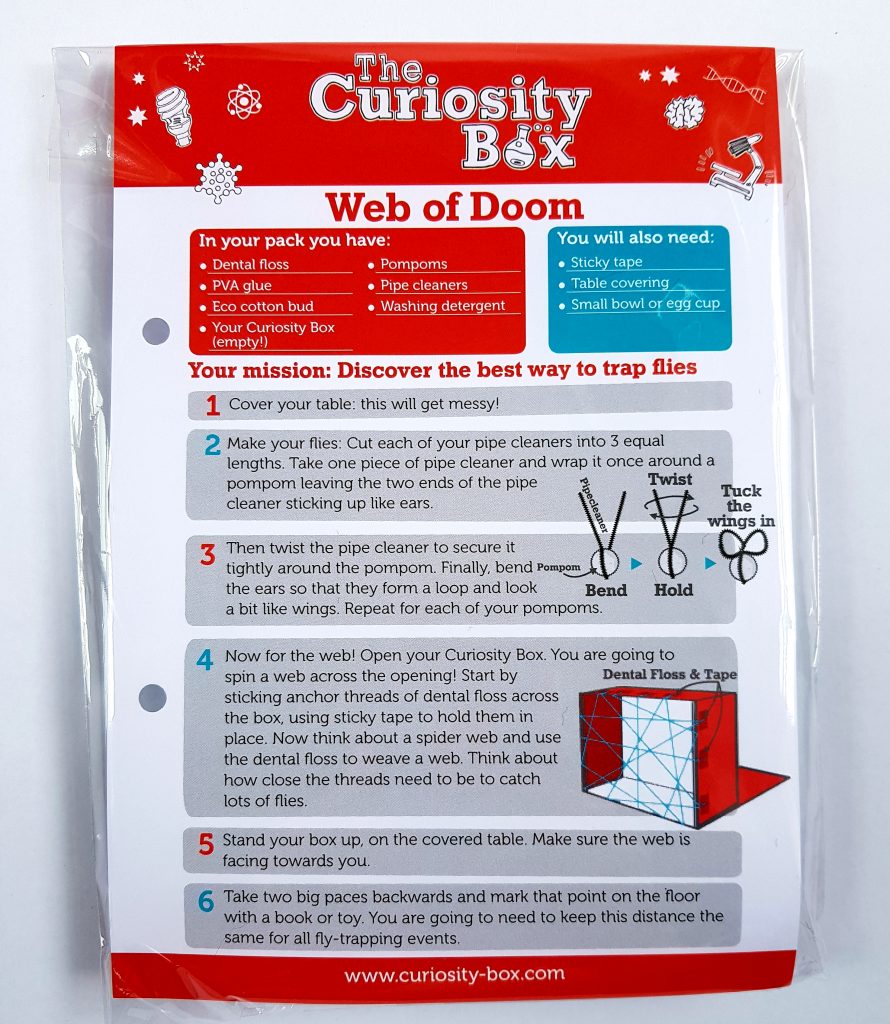 Web of Doom. Who can resist a title like this! 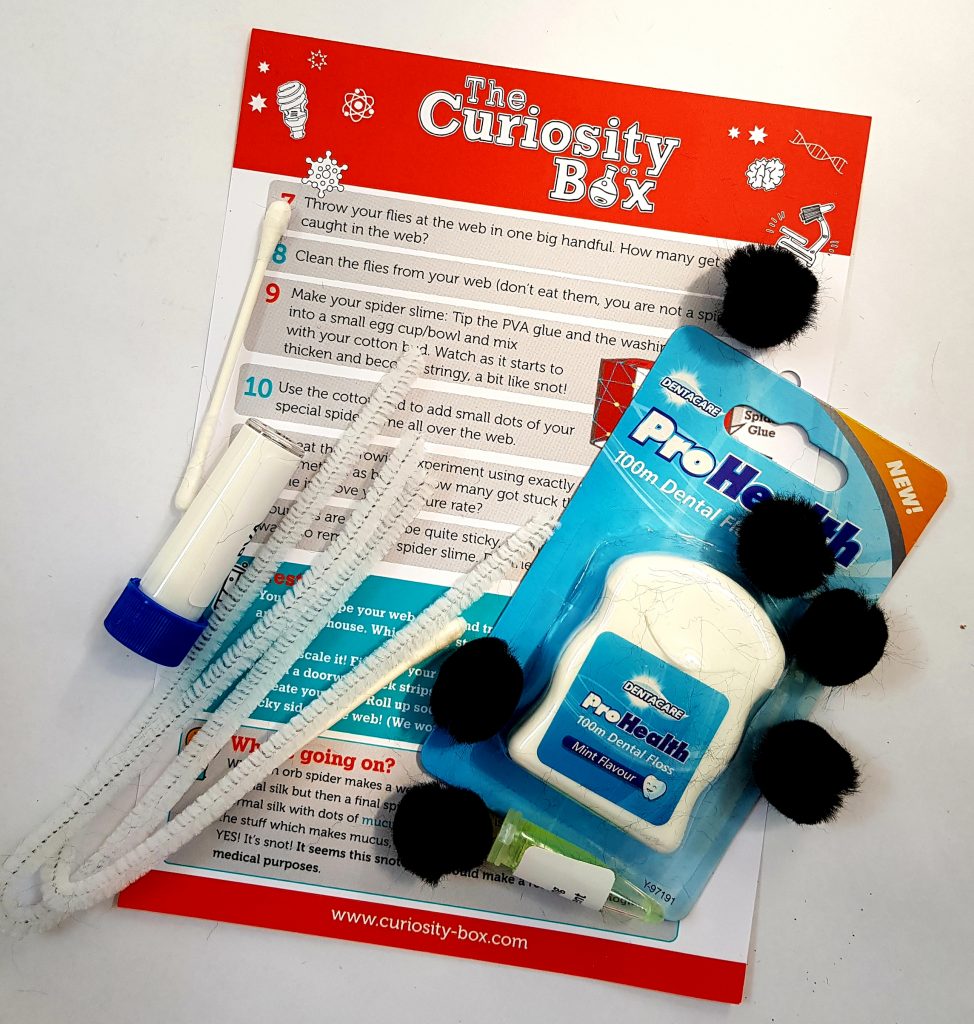 In this experiment you build a web, using dental floss (great idea) and experiment with how well the flies (that is, the pompoms) stick to it. Then you add goo and try it again! 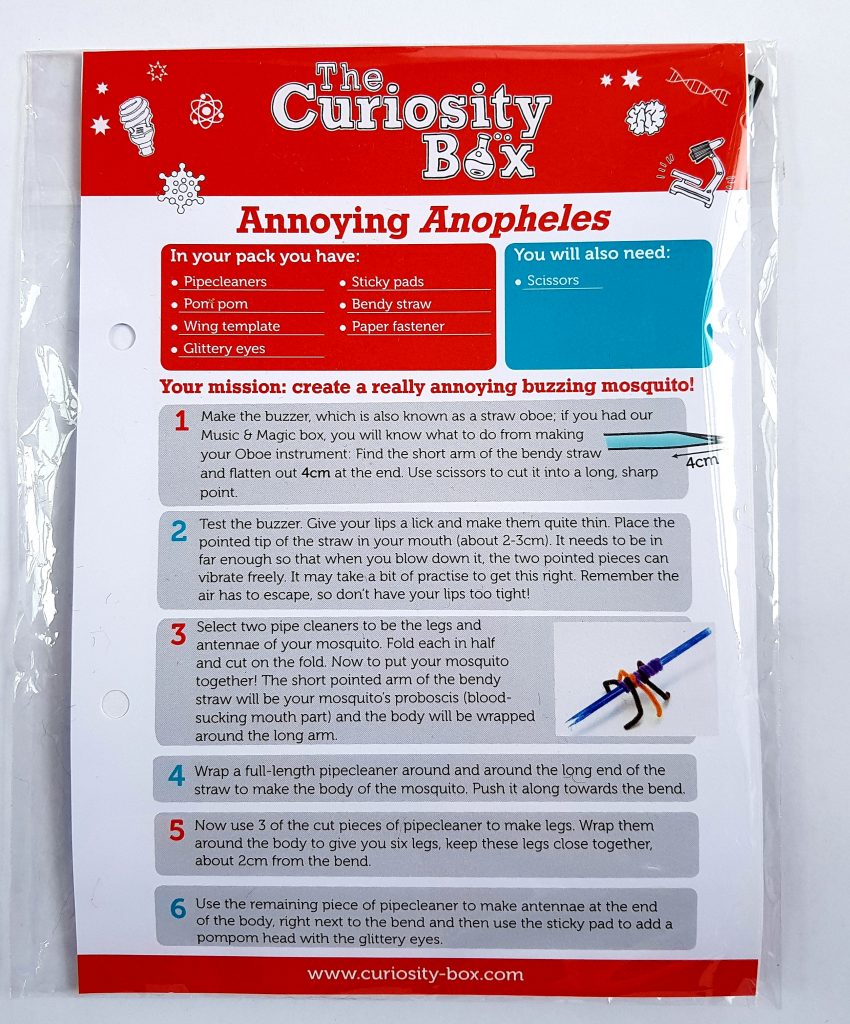 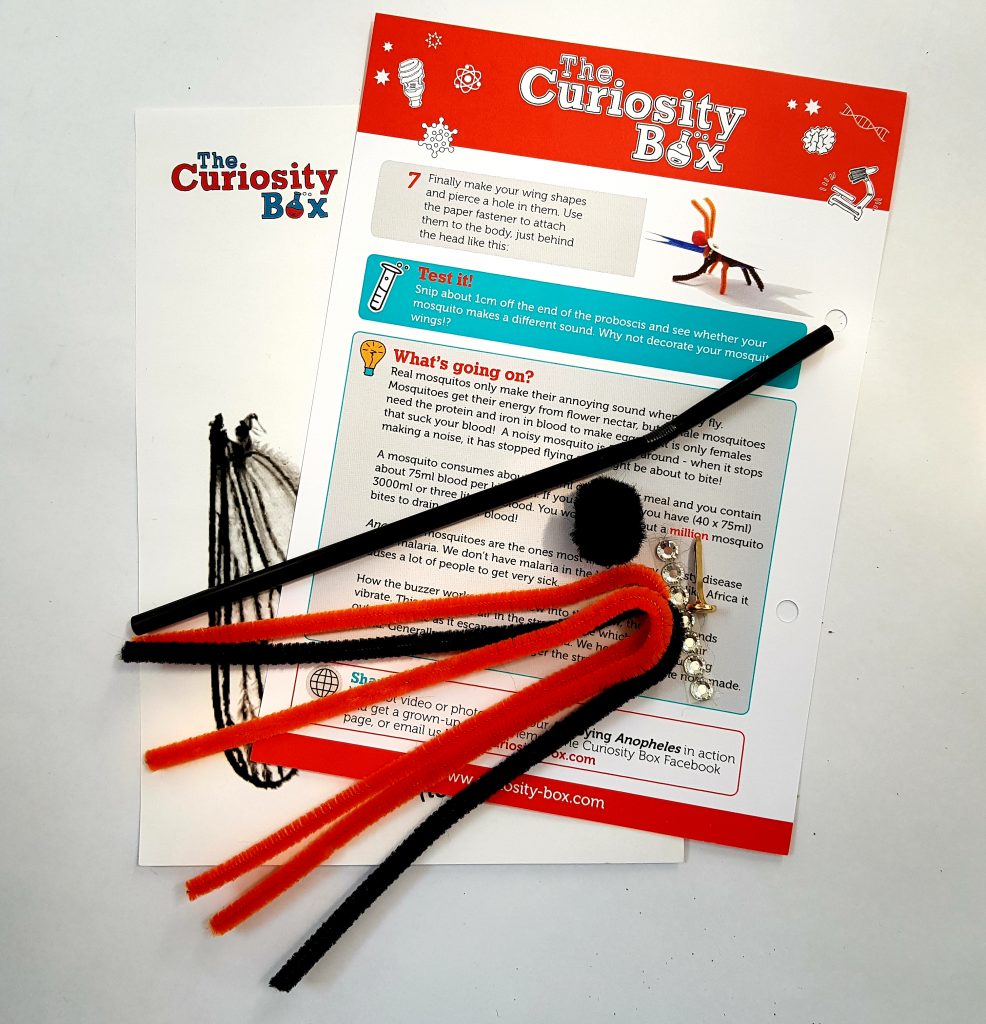 Here you make a model mosquito that will make a buzzing noise. Well, anything’s better than the real thing! A great thing about this experiment is that not only does it give you lots of information about mosquitoes (yuck) but it also tells you how the sound is produced by the buzzing straw. As it happens, it’s not so different to how sound is produced by an oboe reed! And of course as a bonus, your child gets to make something that makes an incredibly irritating noise. Definitely a win for the child! 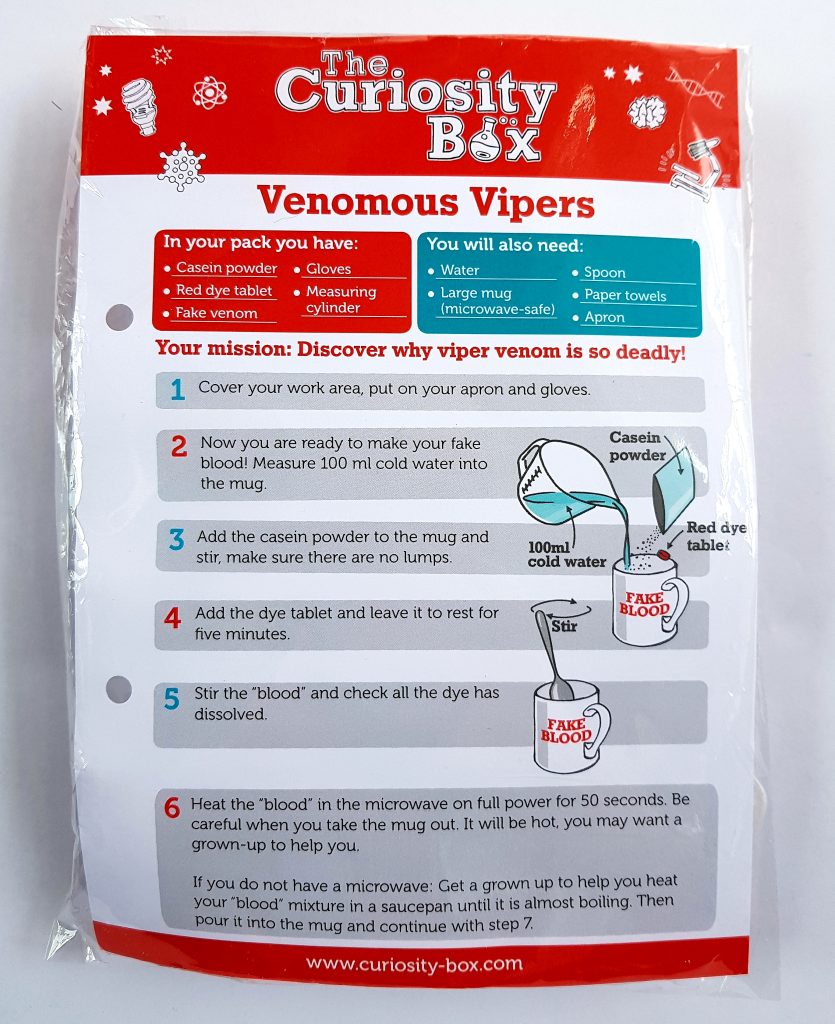 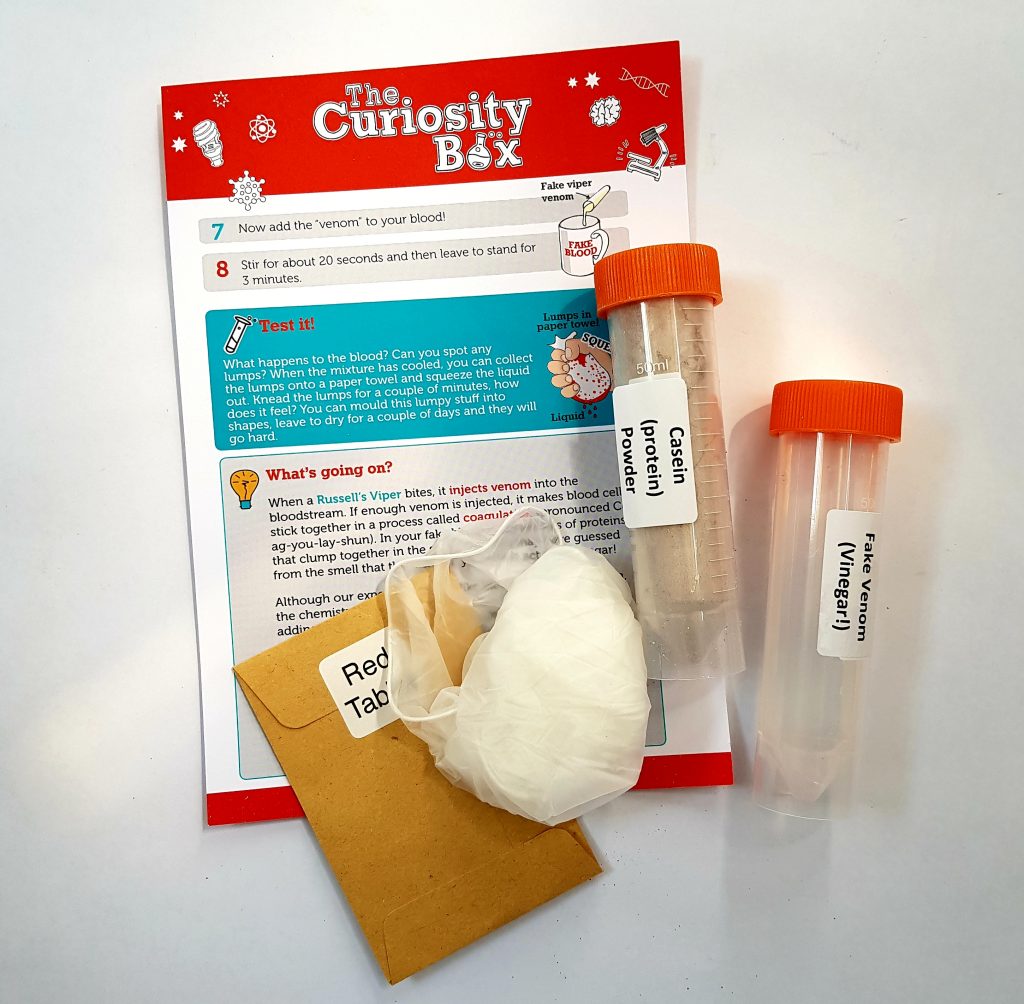 This experiment is all about the effect of venom on blood. You get to make ‘blood’ (always fun) and then add ‘venom’ and ovserve what happens. Extra info about snakes and poison in general is also included for maximum gross-out fascination. 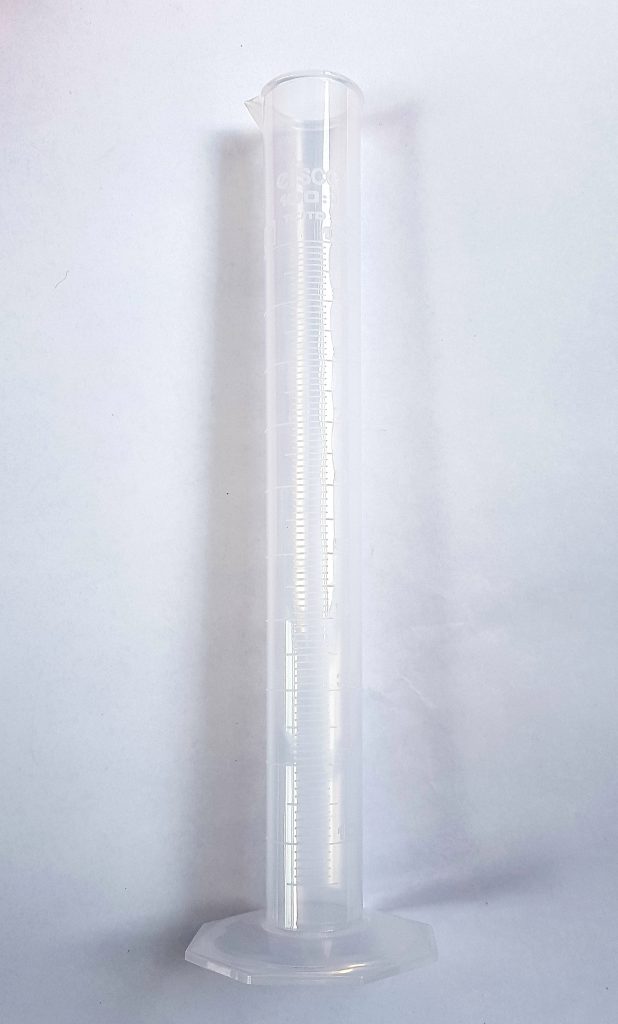 Almost forgot, this measuring beaker is also included. It can be used in the Venomous Vipers experiment, and it can be keps and used again. Great!

Well, these experiments look like terrific fun. I was extremely tempted to just do all of them myself, but as Little C (my daughter) is very keen on both science and gross stuff, I figured I need to wait until she’s able to at least help out.

I like the setup very much. As well as full instructions, the information cards give you some extra explanatory information about the purpose of the experiment, and also how it is relevant to the wider scientific world. I also think it’s fantastic to include things that can be used repeatedly.

Like I said, I’ve not actually tested these experiments yet. Having has a good look at them, though, I see no reason why they shouldn’t do exactly what they say they will!

The theme itself is something that children will definitely enjoy. Bugs, especially dangerous ones, hold great fascination! There is plenty of hands-on stuff for them to do, and the blood and sticky webs provide a nice element of mess and a bit of yuck. You know how children love yucky stuff…

I think science boxes like this are terrific for any child. I happen to have one who loves science (and getting messy) but I think it would be difficult to find a kid who wasn't fascinated by this kind of fun, hands-on, and informative stuff.

How would you rate The Curiosity Box ? 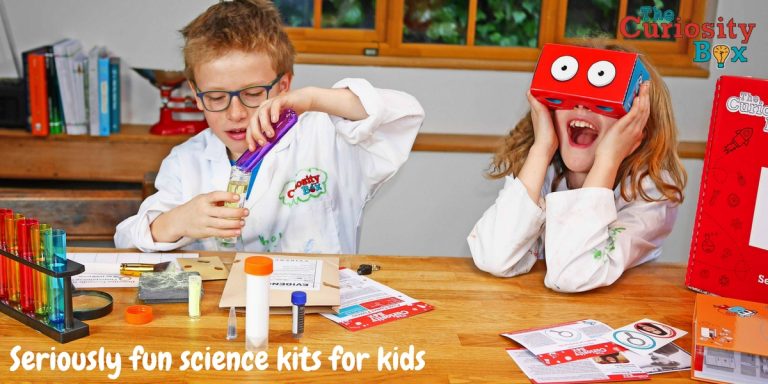 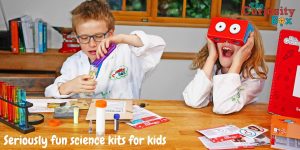