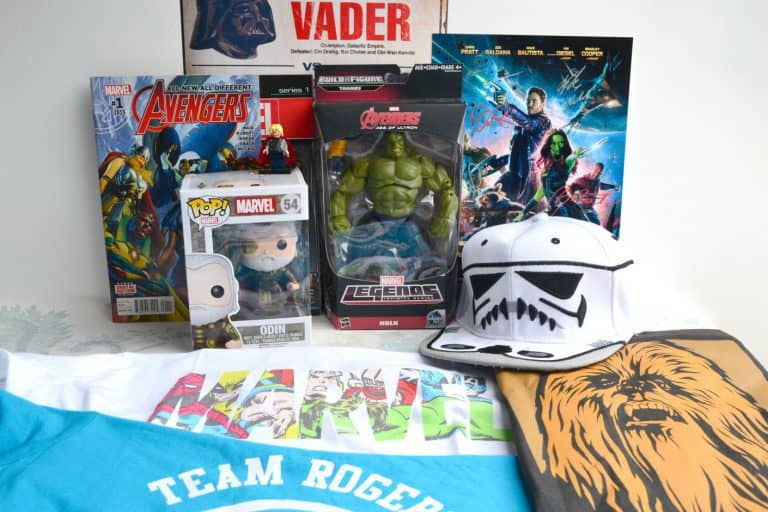 Say hello to the new kid on the block! CultCrate is a brand new geek box promising value in collectables and no fillers. They currently offer two options; the Power Crate with a guaranteed shirt, vinyl and comic book at £19.99 a month, and the SuperPowered SuperBox with three shirts, a vinyl and comic book at £29.99 a month. This is what the post man brought me this week so let’s have a look at what came in the launch crate…

The first thing that immediately grabbed my eye when I opened the box is this amazing Stormtrooper snapback. It has really nice quality embroidery and is just the thing to see The Force Awakens- again. Summer cannot come soon enough.

I’m not sure where the line is drawn when the website defines Lanyards, Suspenders and Coasters as gimmicks but not keychains, but there are no complaints here. Cap is my favourite in the Marvel universe and this is a good chunky addition to my keys. It feels well made and has a good weight to it.

As promised, this box came with three shirts. A Team Rogers Anti-Registration Forces one that you can bet I’m wearing to see Civil War because #TeamRogers always. I love the colour and the size is exactly what you’d expect from a medium.
Next is a Marvel logo one that is actually a mens shirt, whereas the others are fitted womens. It’s a really lovely soft fabric though and would make a great pyjama top for those that prefer to wear fitted during the day.
And lastly a Chewbacca one that is just great. Chewbacca is one of the best things about Star Wars in my opinion. You can’t not like him. The printing is a little thick and blurry but isn’t that always the way with some geek shirts?

They seemed to be all about the Marvel Cinematic Universe when it came to this months figures. The Pop! Vinyl in the box was the Odin bobble-head, who is destined for my desk to flick when I’m bored. He has some of the most questionable parenting skills in the galaxy, but the detail on this guy is one of the best I’ve seen from Funko.

Odin was joined by a Hulk action figure from the Age of Ultron Legends series. There are six figures in the series and each come with a body part of Thanos, collect them all- build your own Mad Titan.

I was a Playmobil kid so this is actually my first ever Lego! Thor looks so angry, but I had a lot of fun putting his miniature body together. I even managed to lift Mjölnir to squeeze it into his little hand. He’s all ready to fight some Chitauri!

I’m a sucker for a #1 when it comes to comics so the new Avengers and Doctor Strange comics are welcome to my long box. Especially with the Doctor Strange movie coming out in November, I’ve been really interested in reading some of his comics.

And lastly it came with two posters; a Guardians of the Galaxy poster with printed on signatures of the cast, and a really neat Darth Vader VS. Luke Skywalker number that is printed on some kind of thin plastic that will hopefully prevent the dreaded poster tear.

Quite a packed box! Thank you to CultCrate for sending me this to review!