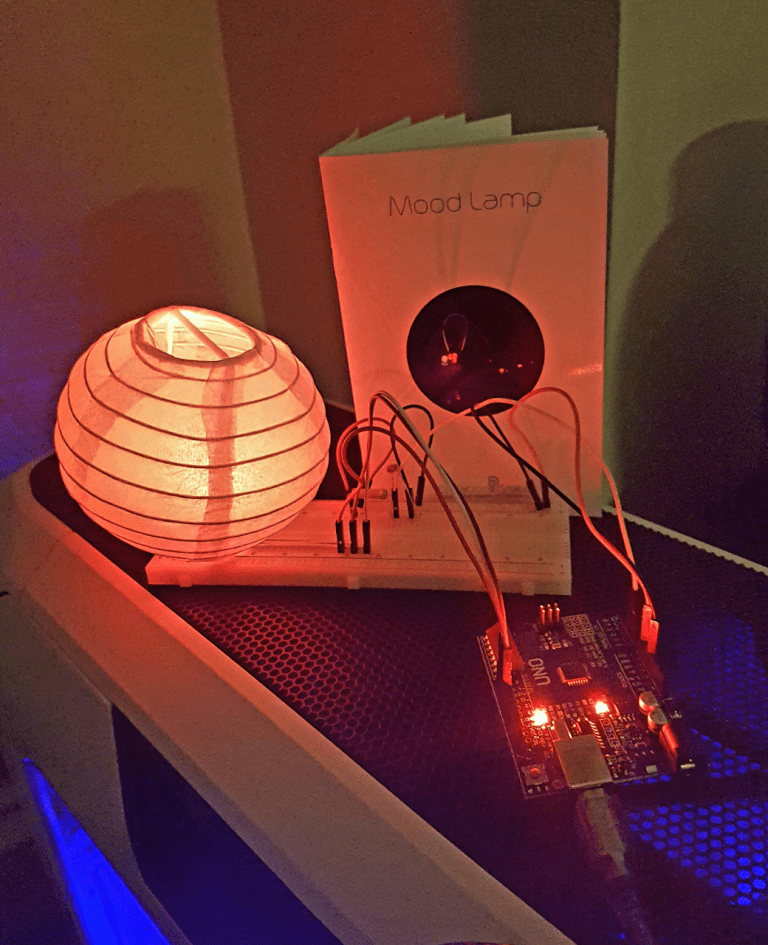 Creation Crate is a subscription box which teaches you to build and code electronics. It’s aimed at families, kids (probably age 8+) and anyone who is interested in getting hands-on with wires and circuit boards and stuff. You don’t need to have any prior experience; all you need is a computer, the ability to read, and reasonable fine motor control. The (very sensible) idea is that anyone can put it together

We tested this as a family:

Me (knows little about electronics and computers, and views them primarily as tools)

Big C (husband, avid gamer, used to code as a child, loves computers, has plans to do Raspberry Pi with Little C in a couple of years)

I actually received this before Christmas, but what with holidays and stuff we’ve only just gotten around to having the right amount of time on a Saturday afternoon to get to it.

It was absolutely marvellous. It arrived well packaged in a cardboard box, and survived the long trip from Canada without a scratch. 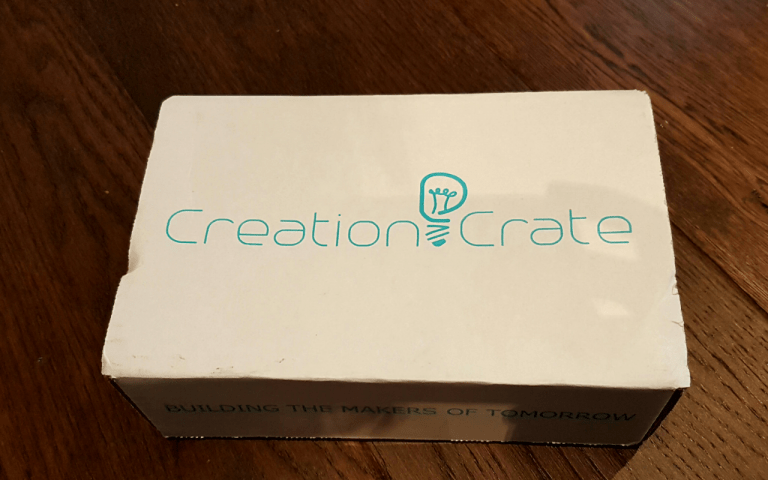 Inside the box were all the components, well bubble-wrapped. 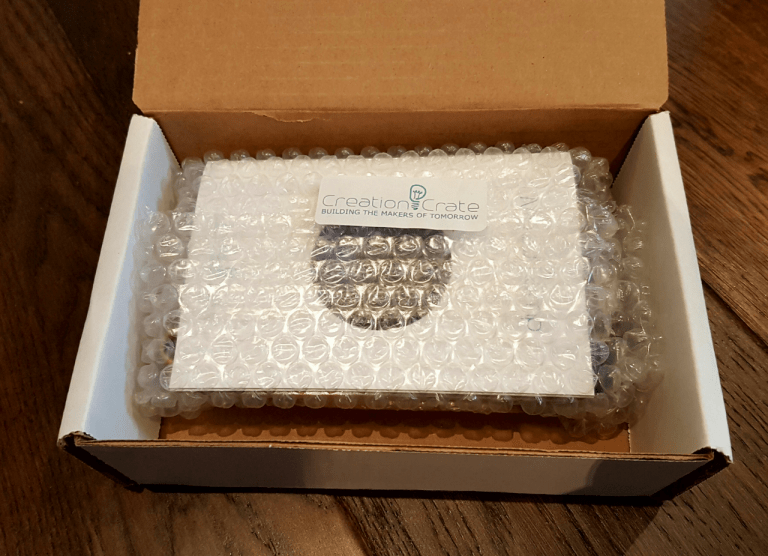 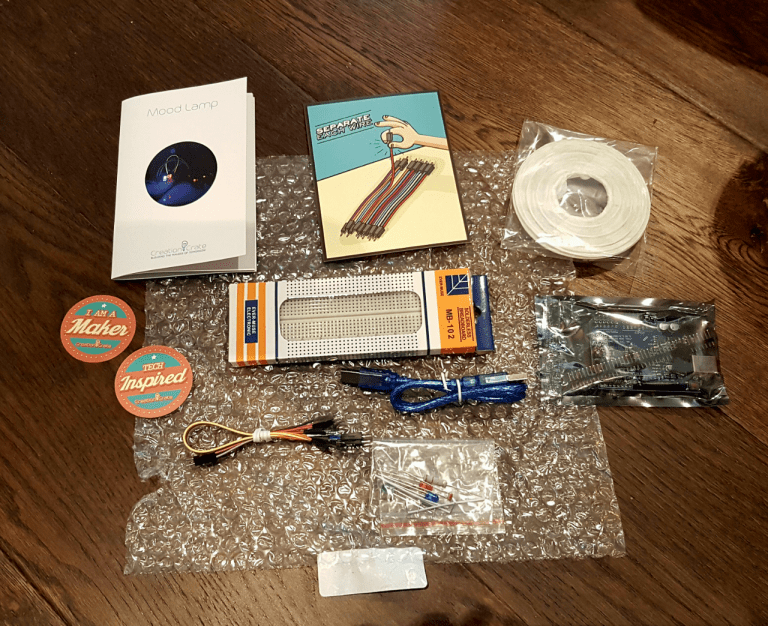 This project is a Mood Lamp – it is a colour-cycling lamp that is programmed to only switch on when it’s dark.

The instruction guide is excellent, really quite idiot-proof. My only slight criticism is that it is rather small, so one has to squint rather to see some of the pictures. Apparently you can get them online, but I don’t really like looking at a screen when I’m doing something practical. But that’s just me. The first thing to do is to put the hardware together. Like I said, the instructions are incredibly clear, and Little C was able to do most of it, with a little assistance from me. It’s fiddly, but not impossibly so. 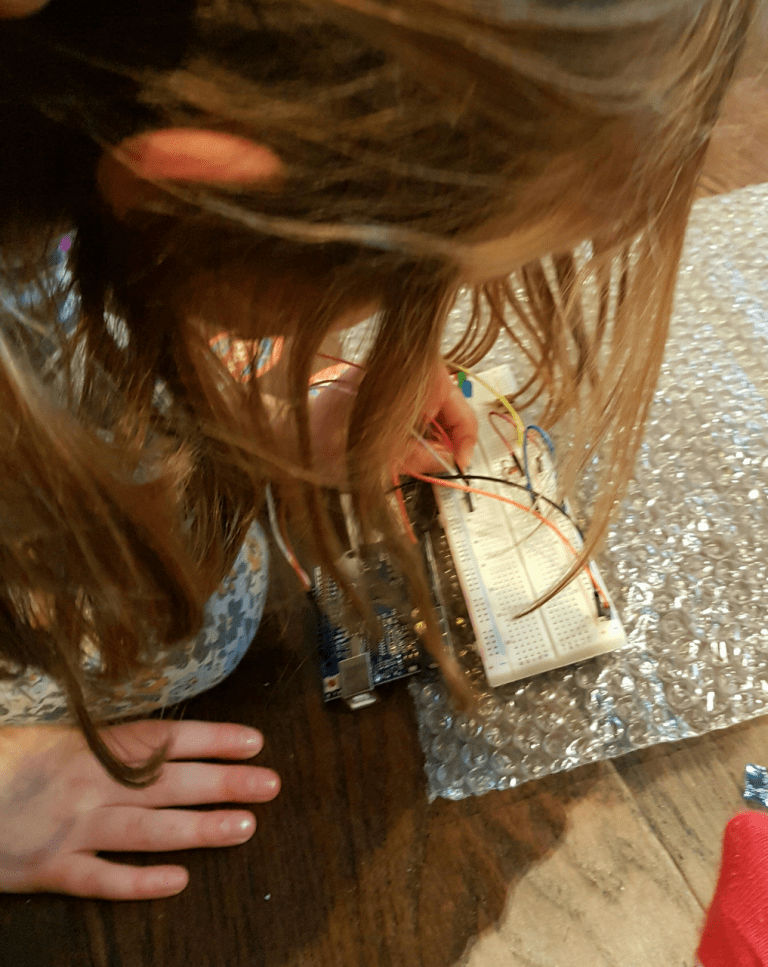 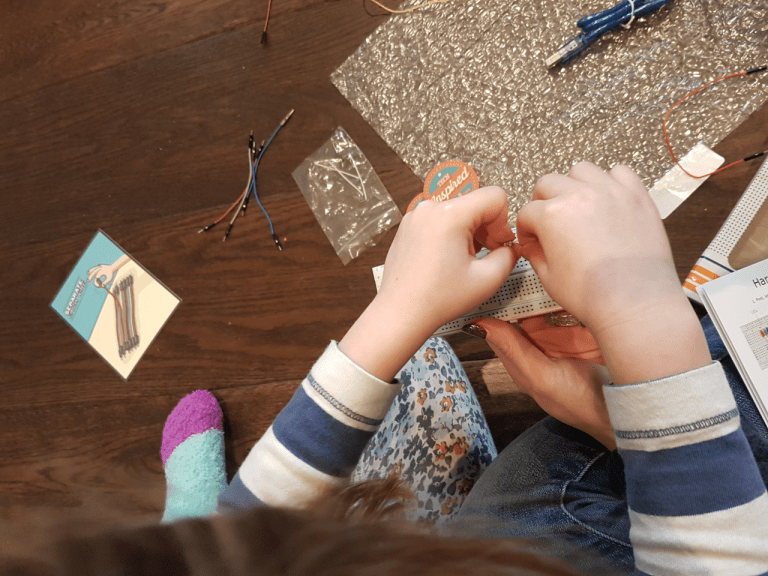 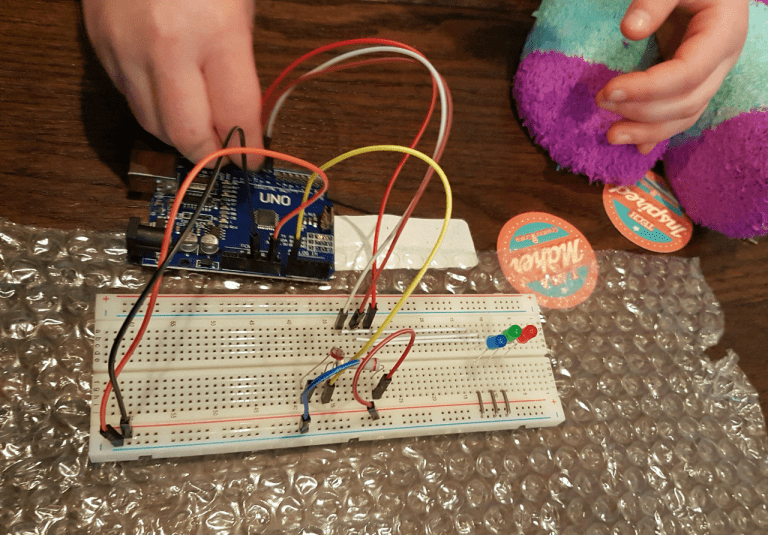 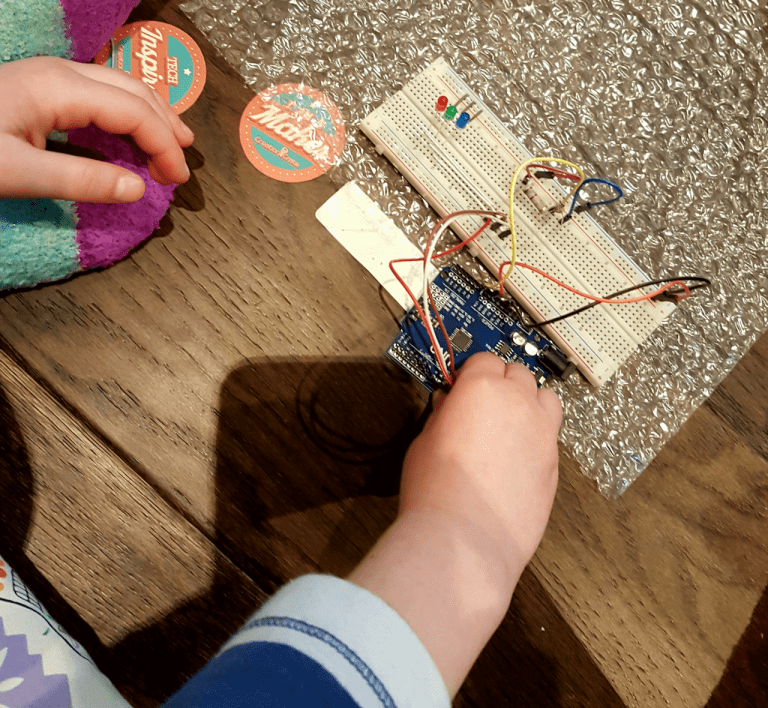 And the building portion is complete! 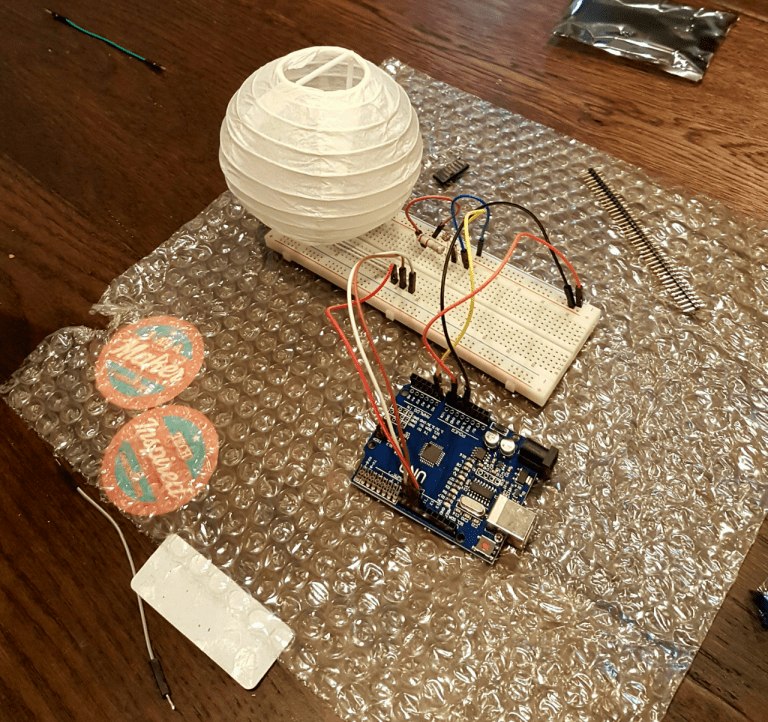 But of course, it doesn’t actually do anything yet. So on to the coding.

For this we had to download some software to the computer, and then type the code given in the instructions. Along with the lines of code there were some excellent notes telling you what each part of the code was meant to do. Again, this was a superb step-by-step process, only very slightly marred my the size of the print. Given that it all has to be inputted exactly right, it’s another bit of a squint. However Little C typed in the first three lines by herself, then switched to reading out the next few lines for Big C to type in instead.

Which is just as well, as she’s not exactly a speed-typist. Understandably, she decided to had the reading over to me after a few more lines, as it is a little time-consuming and not that interesting for a very young child. But Big C and I got the rest of it done, and it was actually extremely interesting to see exactly how computers are told to do something. I only understood about a quarter of it, but what I did understand was very satisfying!

Next we had to plug the lamp into the computer and upload our code. If it was correct, the lamp would work. As it turned out there were a couple of errors, but the program points out where they are and you can easily refer back to the instructions to fix it.

So we plugged in, turned out the lights, and… 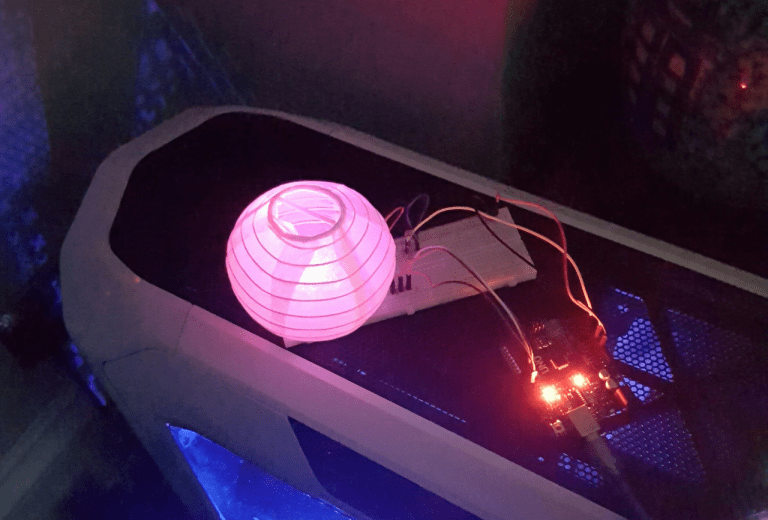 An excellent inclusion in the instruction book is a few exercises at the the end – you are asked to figure out how to change a couple of things, such as the ambient light required to make it work. Big C did these, and reprogrammed it so it would switch on even when the lights were on. So now it is sitting on top of the computer glowing away.

What a marvellous project. It was tremendous fun doing it as a family. Even though Little C wasn’t involved the whole time, she was completely engaged with the building part, and was able to do some typing. I found it fascinating, from a position of almost total ignorance, and feel like I’ve learned some interesting things. Big C loved it, and said it would actually be something he’d be happy to do alone as well. He didn’t actually get to do any of the hardware building this time, so if we were to do it again I think it would certainly be his turn to be Little C’s assistant! 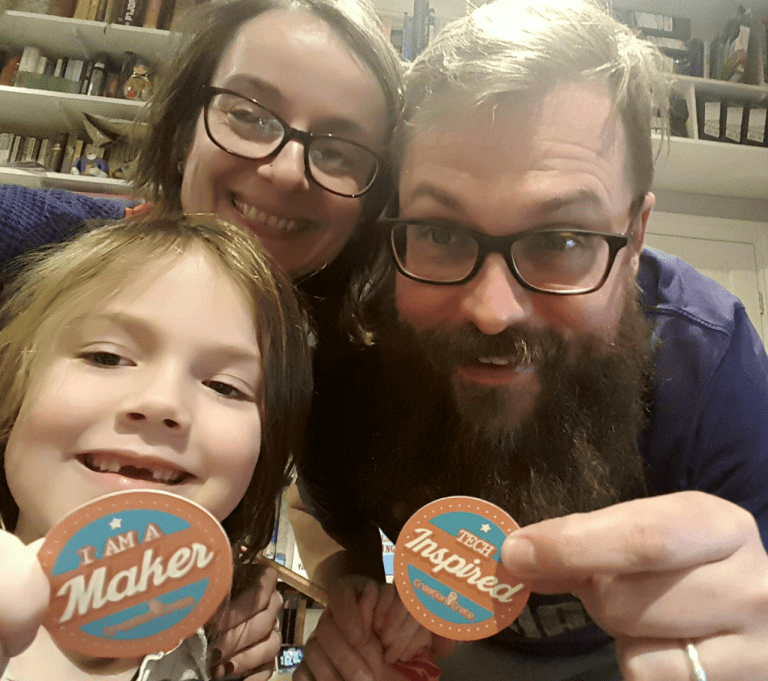 I have two minor criticisms, or rather one tiny, and one slightly bigger. The small thing was the size of the print. I know they’re keeping it compact, but I think larger print could have been used which would only mean one extra page in the book.

The second is that there is an almost-error: the instructions include a web address from which you download the software. The address was correct. but there was a full stop at the end of it. Now, it was the end of a sentence, but someone who really didn’t know would include the full stop in the web address, which would mean the link would not work. So, in this case, the correct punctuation is confusing. Big C actually pointed this out, as he was doing the computer-ing, and said it could be a problem for someone who was following exactly what was written.

But those are minor flaws. Not even flaws, notes.

I think this would be the most marvellous gift, either for yourself, your family, or really anyone who isn’t completely anti-tech. And even then, it might be a wonderful inspiration to enjoy tech more! I would suspect a ten-year-old could handle this with minimal if any assistance. In fact, my mother could probably do it, and she is far from computer-literate. As it’s a monthly subscription, it would be a lovely way to spend some family time doing something a little bit different every month. It is a great learning experience for everyone. Apparently the projects get harder every time, so I’d love to know what comes next!

How would you rate Creation Crate ? 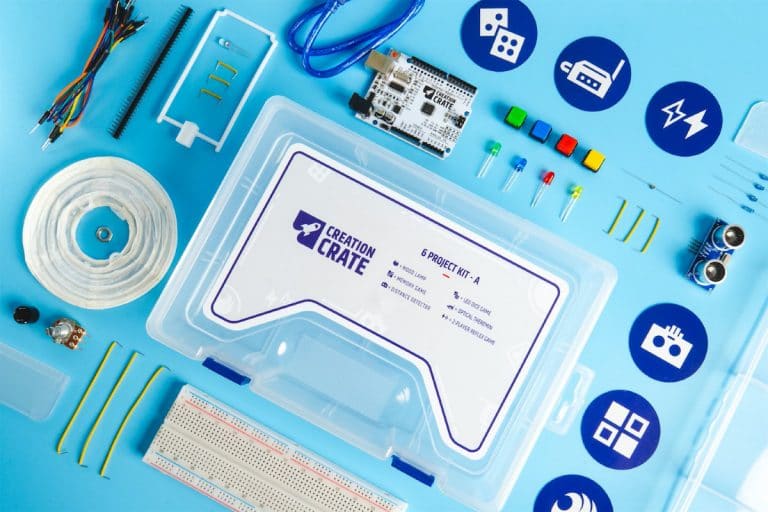 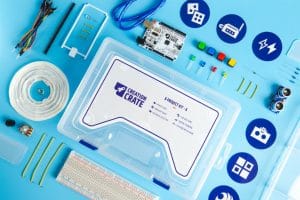