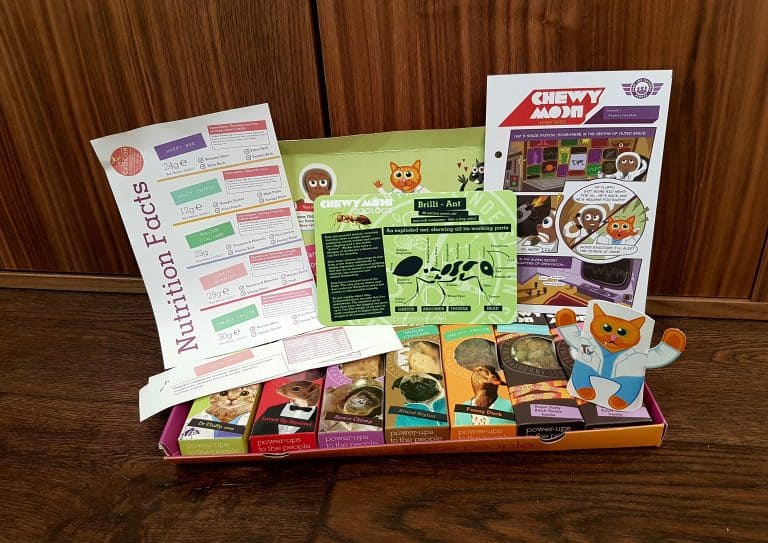 We all know how much kids love snacks, and arguably there are times when they definitely need them. For example, when you’re on the way home from school, and the chorus starts: ‘I’m huuuunnnngryyyyyy!’ And of course the temptation to reach for some sugary candy or brightly coloured pack of crisps is considerable, not least because you’ve forgotten, yet again, to lovingly prepare something which is both nutritious and not full of artificial crap.

Here is where ChewyMoon comes in. Each week you get a box of five good-sized snacks which your kid is unlikely to turn their nose up at, and you are safe in the smug knowledge they contain natural ingredients and actual nutrition. They are big enough (and take enough time to eat) so that they will not be gobbled in a flash, but not so much that they will spoil their supper. Perfect for after school every weekday (though at weekends you’re on your own).

Every fourth week you get a box with two bonus ‘adult’ snacks. While they may serve to stop the adults from feeling too left out of all the snacky yumminess, I’m fairly sure you’d have trouble stopping the kids from swiping those too, regardless of the ”Grown-ups only, kids keep off’ packaging.

Each box contains a list detailing what is in each snack, including ingredients, so you can be sure you’re not feeding your little darlings high fructose corn syrup and sunset yellow. As another bonus extra, each box comes with a press-out character you can build, a comic book-style page about the various characters on the packaging (crazy animals, they’re very funny), and best of all, a rather good information card on zoology. My boxes came with a card about ants, which was of good quality laminated card, a great diagram, and lots of information. I like the bonus knowledge thing, it reminded me of the cards which come with those bear fruit yo-yo things. It’s amazing how you can trick kids into learning something when it comes with food.

According to the website, you can order a sweet box, a savory box, or a variety box. You can also specify nut-free, which is great for allergies or schools which don’t allow nuts. Once you subscribe and start getting boxes you can go on the website and choose which ones your kids loved or hated, so as time goes on the box becomes increasingly personalized according to the tastes of your kids.

My lovely testing assistant is my six-year-old daughter, Little C. As it’s actually half term this week, she’s just tried a few at random, and we’re saving the rest for next week when we’re back on the school run.

OK, on to the details.

The lovely ChewyMoon people sent me two boxes, one of the standard five-snack boxes: 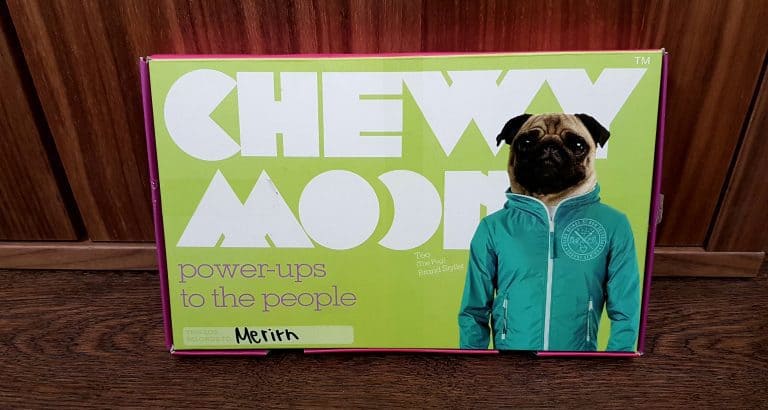 and one of the bonus seven-snack boxes. 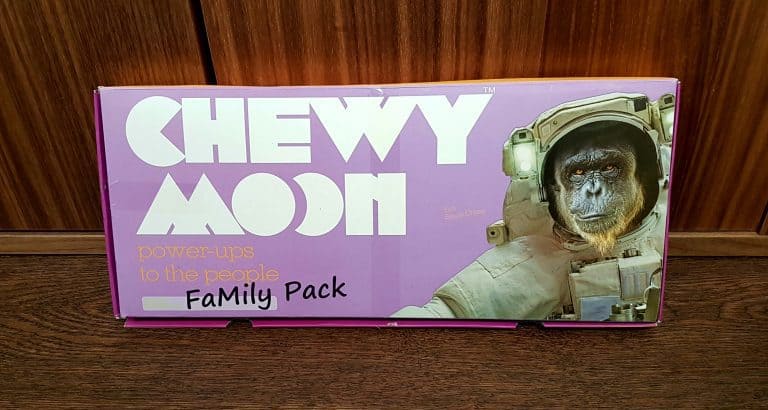 I have to say, the packaging and design is fantastic. Plus they are also very slim boxes, so they will fit through a letterbox with no problems at all.

And let’s open them up: 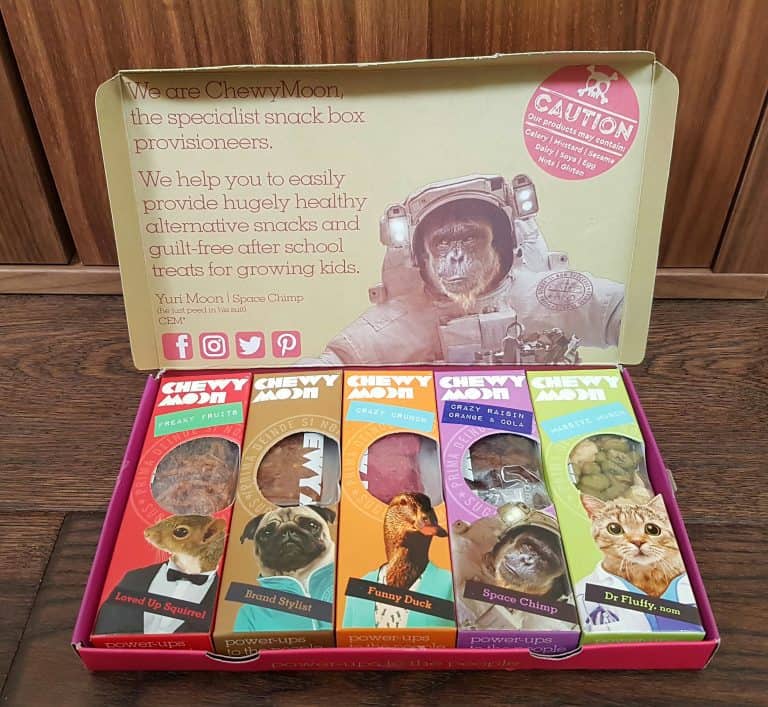 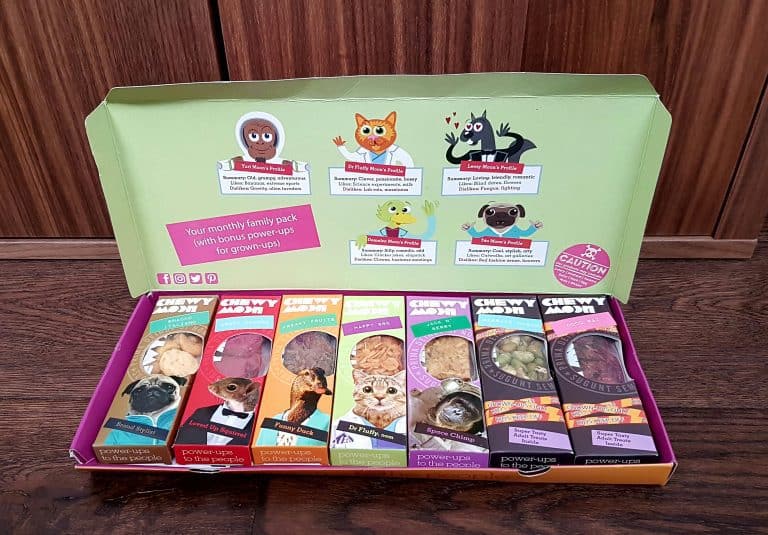 Again, look at that packaging! Beautifully designed. Each little box has a sticker telling you which snack it is, so you can check on the enclosed list what it contains. You might notice that one of the boxes is missing a sticker, but using a brilliant process of elimination we figured out that it was Jack ‘n’ Fruit (a flapjack and dried fruit). 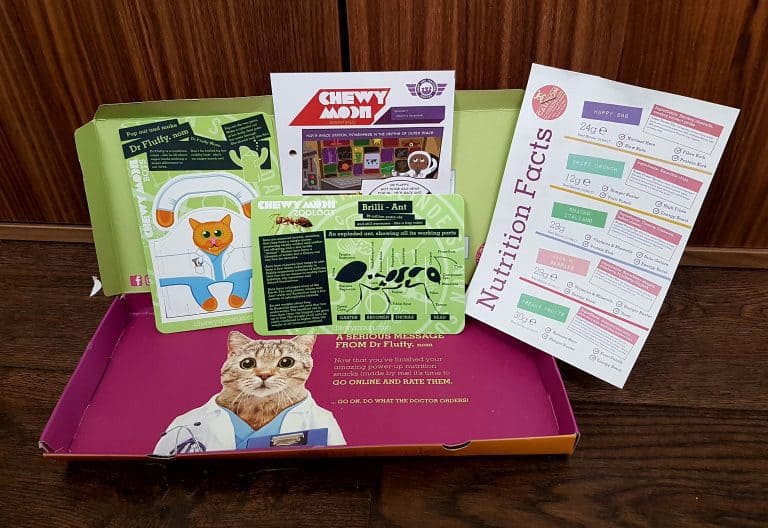 These are the various inserts, which were at the bottom of the box, under the boxes themselves. We actually had the same comic and information card in both boxes, but I presume that was because they were both sent at the same time. Not a big deal, and the little press out characters were different. As an aside, those characters were a little difficult to put together, and I ended up sellotaping them together. But they still looked cute.

As I said, we haven’t yet done a complete taste test, but a few have been investigated.

Hands down the favourite was the Freaky Fruit, which managed to taste and feel like gumdrop-type candy while being made from actual fruit. So no surprise why that one was popular! She’s eaten them both. Nothing like conning your kids that they’re getting candy when it’s actually stuff that’s quite good for them. The Jack ‘n’ Fruit was also a success; the flapjack part tasted a little like a Nakd bar, if you’re familiar with those. 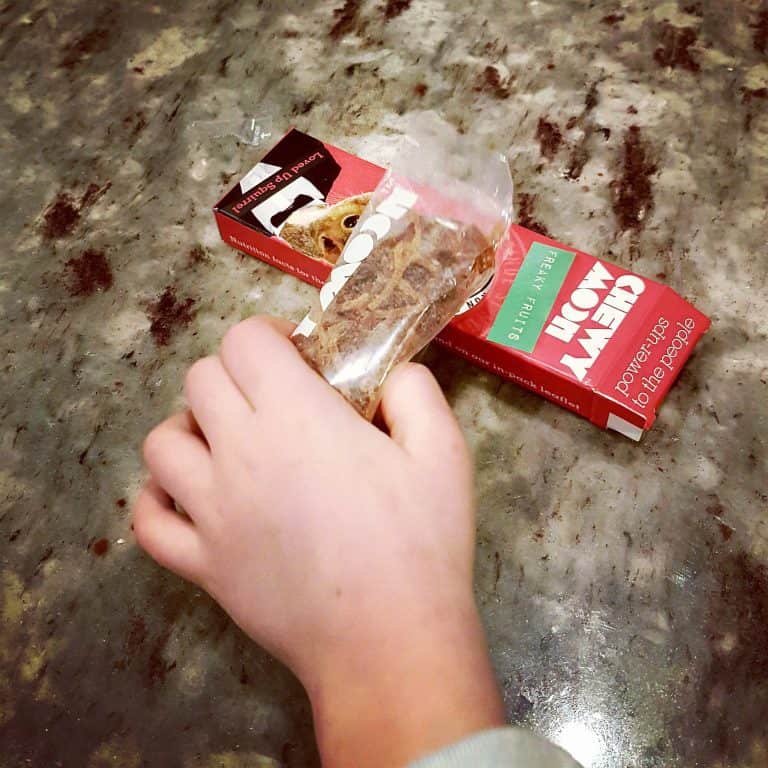 In the savory department, the Massive Munch was pretty good. It was crunchy edamame beans, crunchy millet balls, and little crunchy cheese discs. I’ve found with Little C it’s better not to tell her what she’s actually eating, as the chances of her saying ‘I don’t want it’ are much smaller! She wasn’t crazy about the cheese discs (because she doesn’t like cheese, though at least she tried one because I didn’t tell her that it was cheese) but the millet balls and beans went down a treat.

Anyway, we’ve established that the snacks are pretty nice, and a good size. However there is one things which is slightly awkward. The snack packs, as you can see, are small slim cardboard boxes, and inside is a plastic package containing the actual snack. The size is great, both portion-wise and for portability; you could easily throw a couple of these into your bag and not worry about them taking up too much room.  BUT, the plastic bag part is actually made from quite thick plastic, and it is a little difficult for little hands to get into. There is a notch in the seal at the top of the pack, but my daughter still found it quite hard to tear. And then, the actual hole which is made in the corner of the pack is rather small so it’s tricky to get at the contents, especially when you have gotten the first few bits out. I can imagine an attempt to widen the hole could result in the snack being lavishly scattered in lap/floor/car. Now, an older child would be fine, I’m sure, but for younger children it’s awkward. It’s certainly not insurmountable, and if your hands are free then it’s perfectly simple for an adult to make the bag easier to get into. Personally, I would have to remember to do this before setting off in the car, because our school run through winding country lanes is not conducive to juggling little packages with ‘hurry up mummy’ bleating in my ear! So a little care is necessary. It’s certainly not something that should put you off, and there are plenty of snacks which require assistance for little hands, but if you’re in the car (a favourite snacking location in our family) it’s something to bear in mind before you throw a box in the direction of your kid and hit the gas.

I think I would have liked to have two rather than one savory snack in the five day box. It’s lovely to have the sweet stuff, but as I’m something of a puritan about not making a habit of giving kids sweet stuff (most of little C’s after school snacks are savory, cue more mummy-smugness), it would be nice to alternate sweet and savory days. Something else nut/seed-based would be good.

Anyway, in conclusion I think this is a good service. It costs £4.93 per week, including p&p, which works out at just under a quid per snack. Of course, you can get snacks cheaper than this, but not, I suspect, likely to be nearly as nutritionally impressive or varied. Plus your extra bonus snacks every four weeks don’t cost any extra. Personally I think a fiver a week to keep your kids quiet on the way home from school, avoid a sugar rush, not have to worry about remembering to buy or prepare something, plus the bonus smug-healthy-parent feeling, is a bargain. Oh, and they have something to learn, something to read, and something to play with too. The boxes are addressed to your child (mine was addressed to me only because they didn’t know Little C’s name) and children love getting mail, especially when it contains yummy things. 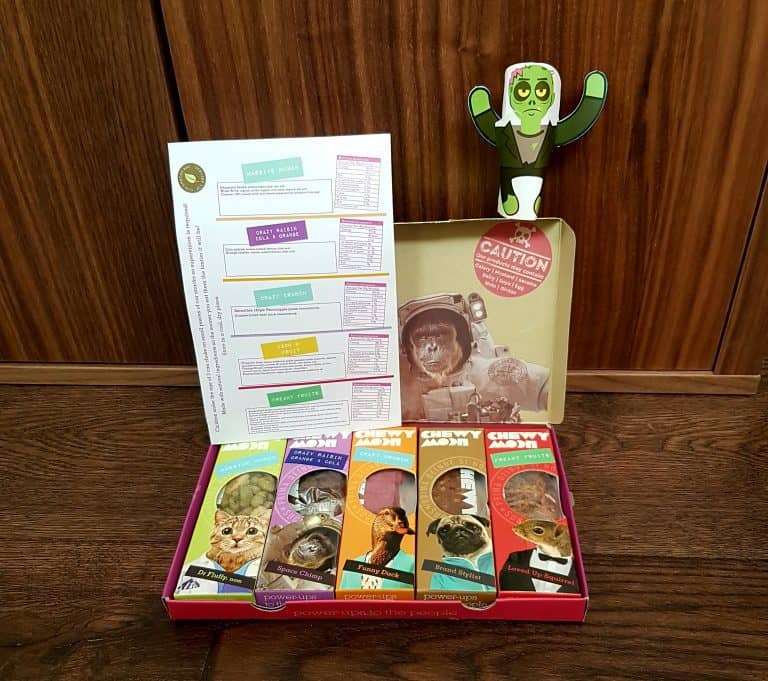 How would you rate ChewyMoon ?