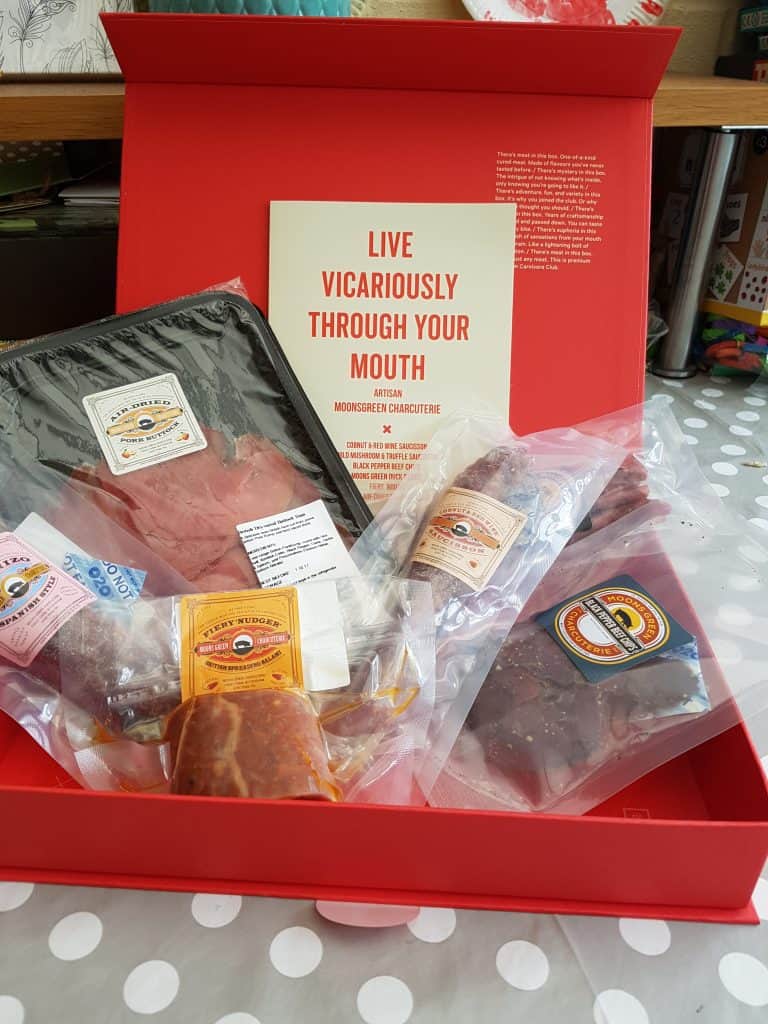 This was our second Carnivore Club box and it really is a bit of a treat – I couldn’t help but get a bit excited to see what was in store when we got home and we weren’t disappointed. The boxes are such good quality that we actually keep them. I am not sure what we will put in them but they are really sturdy and strong – maybe we should start hiding important letters in ours? I really think that a one off box or a subscription to the Carnivore Club would be a huge treat for someone special and this months’ surprises were really good. 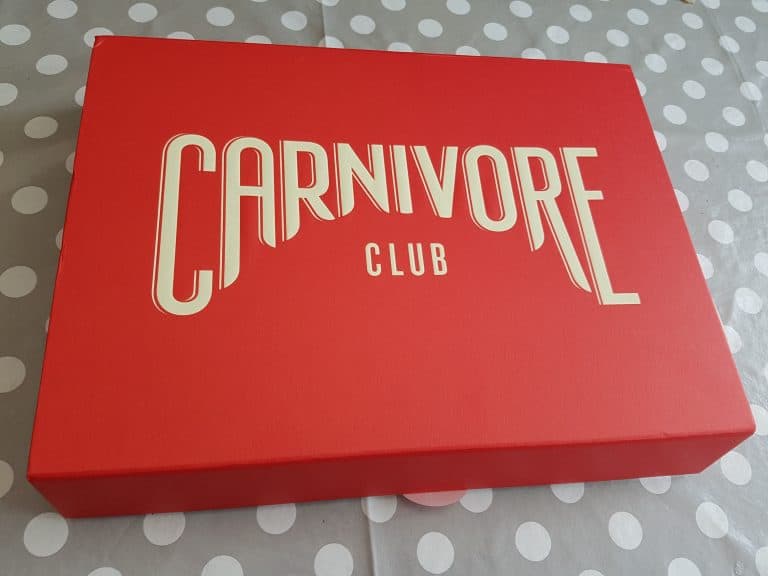 The artisan for this month is Moons Green Charcuterie and I loved the brewery style labels on each delicious treat. I also really liked the booklet that came with the meat in this box – the first box we tired also had this but there was less information on pairings for each product; this box had great suggestions and we really appreciated these to help make the most of the marvellous meats. 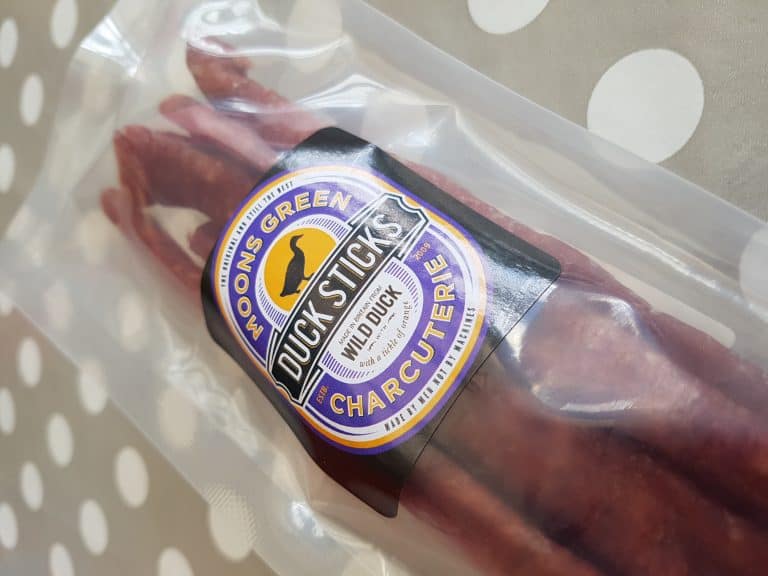 These snack sticks were just divine. They have a hint of orange and this really came through perfectly – the booklet suggested pairing them with a cold beer, but we ended up devouring them as a late lunch snack. Even our four year old son liked them! They were so easy to eat and were the perfect start to the box! A little bit unusual but definitely one of the favourites here (plus you’re guaranteed to find yourself humming the ‘Duck Tales (wooo-oooh!) theme tune after eating them…which is never a bad thing in my book.)

Next up were the black pepper beef chips. These are made from air dried bresaola and were really unusual. Something to do with your brain telling you they are crisps even though you know they are meat (am sure Heston Blumenthal could explain it better!) We had these as a snack one evening and wished there were more – super addictive and it was nice to see something a little bit different. The herbs and spices gave a pleasant kick and these would be amazing with a nice cool beer one summer or autumn evening. 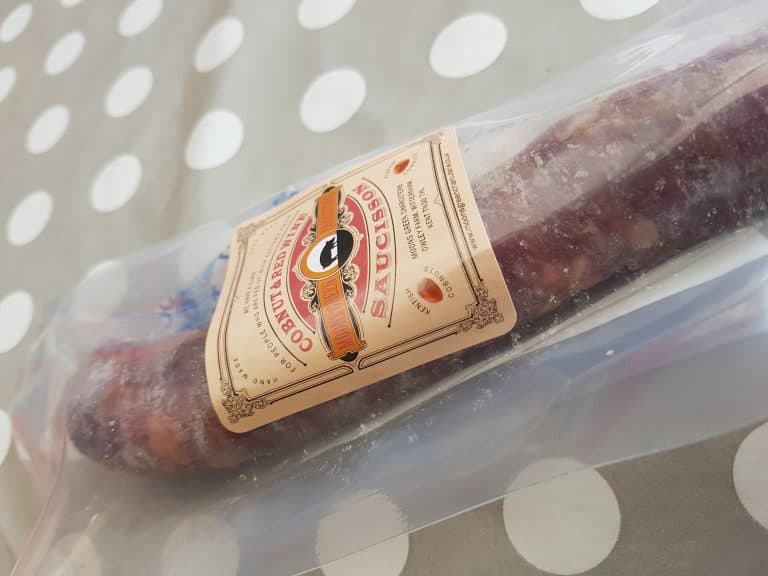 We paired this with some goats cheese, as suggested by the makers. It wasn’t too overpowering and really made the cheese stand out; they were the perfect match and just the right balance. It was also lovely to have something made with cobnuts from Kent; a British spin that we really enjoyed.

This was the best in the box, in my opinion. I can sometimes find too much charcuterie to be a bit overpowering (shhh don’t tell Carnivore Club!), but I could have eaten buckets of this. The buttock has cider added during the curing process and it brought out a subtle apple flavour that worked so well with the pork. My husband and son agreed and we were fighting each other for the last slice. Simply delicious.

(Apologies about the photo!). This was an interesting one as the description for this came as ‘wild mushroom and truffle saucisson’ and it is obviously not. I’m not sure what happened when the boxes were being made up – if the booklet was wrong or we just ended up with the wrong product but I was quite sad as the description of the saucisson was amazing. What I can say about this chorizo is that it is definitely one of the nicest chorizos I have ever eaten. We ate most of it just sliced up but a few days later we made our own pizzas and added a few slices to one of them. It was incredible both raw and cooked and you could really taste the paprika. Smoked paprika is one of my favourite things in the world anyway so I was hardly disappointed with this; but I would have loved to have known what the makers would have recommended trying with it.

This photo doesn’t really do the ‘nudger’ justice – it was the one product I was really looking forward to trying as my experience with nduja thus far has been limited to spreading meat that was over spiced and under flavoured. The nudger was a bit firmer than I was expecting it to be, the makers advise that you can spread it on to crackers or fresh bread and ours was definitely too firm to do that but it would be delicious crumbled up into pasta, which is exactly what we did. It was a great balance of spice but also really good flavour and I’m so glad it was included as I’d partially written off nduja because up until now I had just found them to be a bit too spicy. My mouth still waters when  I think of this, which has to be good right?!

All in all we were really impressed with this months’ Carnivore Club box. For £29 it isn’t cheap but for a special treat aimed at someone who really loves their food you can’t go wrong.

We absolutely love Carnivore Club in our house and in fact, the only thing holding us back from having one of these delivered every month is the cost. It is really the only reason that this score comes down a fraction, because I think if we were to buy each item individually we would probably spend less. I appreciate that with the subscription itself you are paying extra for someone to expertly curate the selection for you, as well as offer their expertise and deliver it to your door - for us we're just not at that stage in our life when we can justify having this but I can really see us signing up in future. I also love the fact you are introduced to different artisan producers as well, something that you just can't really get anywhere else, and weve already bookmarked Moons Green for future purchases.