Reviewed by Lisa-Marie on 6th August 2014

Box of OMG is packed with #TotallyOMG goodies from brands you know and love and new brands we know you’ll love – Filled with makeup, movies, music, apps, fun stuff, and yummy treats! They’re busting with OMG and sent out every two months – FREE!

The Box of OMG box is very similar to it’s brother, the Box of Awesome. He only real difference is that the Box of OMG is pink and targeted at girls. The box itself can be bought as a subscription or you can sign up to the website and be in with a chance of winning one on a first come, first served basis.

When the box arrived my daughter was super excited! She loved the Box of Awesome and wanted to see what this box was like in comparison. The box is again, similar to the Box of Awesome with lots of text and the logo all over it, but in pink! It is a good size too for a mega box. When Natalie opened it she found loads of amazing goodies wrapped in pink tissue paper! 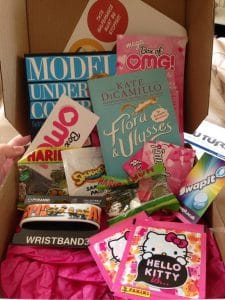 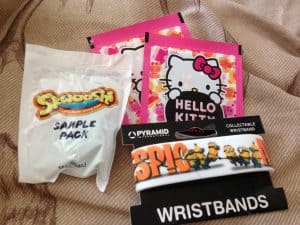 Natalie loves Hello Kitty and so her favourites were probably the Hello Kitty stickers and the Skwooshi sample pack. The stickers are collectable ones for the latest Hello Kitty albums. We have collected a few Hello Kitty albums over the last year or so and found these great for starting a new collection. The Skwooshi was a huge hit with both Natalie and her two year old sister, Charlotte. She had never heard of Skwooshi before so after googling and you tubing we discovered its many uses. In a nutshell it’s non messy putty which, if rolled around and pulled apart slowly, it will take the appearance of trickling water. We all had a go at this and can honestly say, it isn’t easy to do. Natalie eventually had it dripping, but it didn’t resemble water and so that trick was abandoned and the girls used it solely as putty. 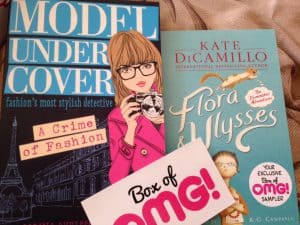 The Despicable Me armband also looked fab. Natalie has small wrists and found it a little large, but loved the simple design with the minions.Her least favourite, was probably the stickers. She felt they were a little plain and seemed aimed at older kids. Conclusion – the box is fantastic value for money if you’re subscribing as the books alone will probably be equal to the box price. If you’re lucky enough to receive a free box via their webpage, even better. The products are good quality and will keep any young girl entertained for a few hours. Would make a great gift or even a treat for the holidays.

This box has a slightly different model to the standard subscription services, the box is actually delivered every 2 months and is totally free!

As they are in such high demand however, there is also a subscription box, which you can purchase for £4.99 to jump the queue and get some extra special goodies.

None at the moment.