Reviewed by Mary on 1st September 2021 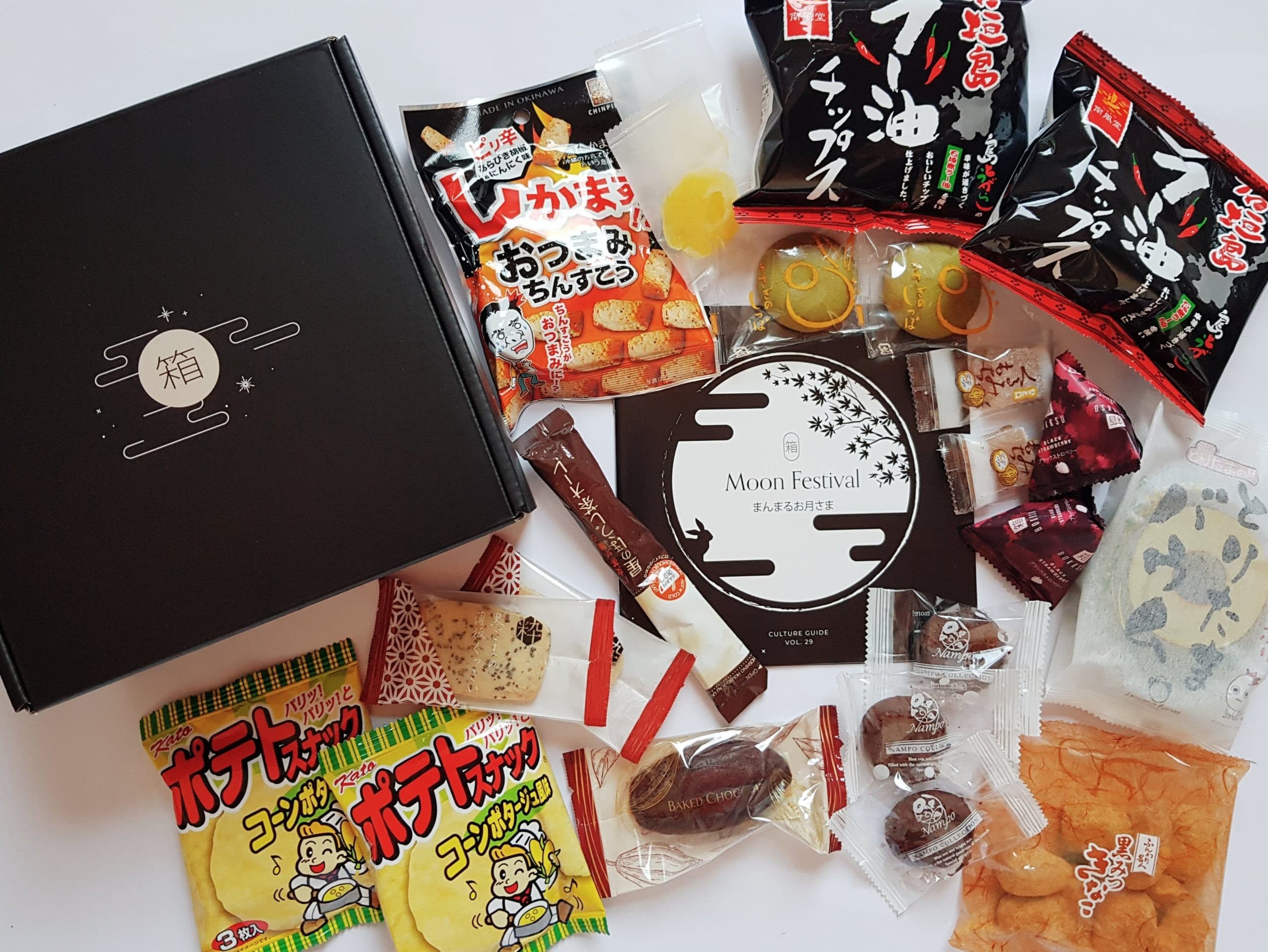 They have two levels of subscription: the Tasting, which is smaller, and the one I have received, The Classic. Subscriptions are prepaid for one, three, six, or twelve months. For the Classic box they work out at $39 (around £30), $37, $35 , and $33 per month. As usual, they are priced in dollars, so GBP conversion is according to today’s exchange rate. Obviously this will vary, but it gives you some idea of cost. 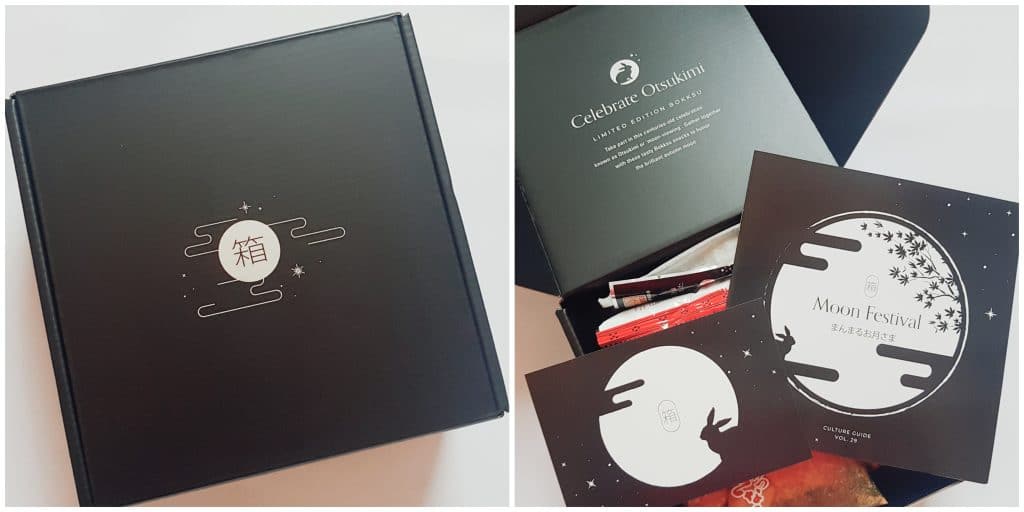 There’s a special treat this month with another beautiful limited edition box. As summer fades away, Bokksu is celebrating a famous Japanese autumn festival: Moon Festival.

The menu booklet tells you all about the Moon Festival, including folklore, language, and celebrations. There’s also the usual beautiful content, a map that shows the origin of each snack and of course the detailed menu that tells you about each snack and even includes an allergy guide. 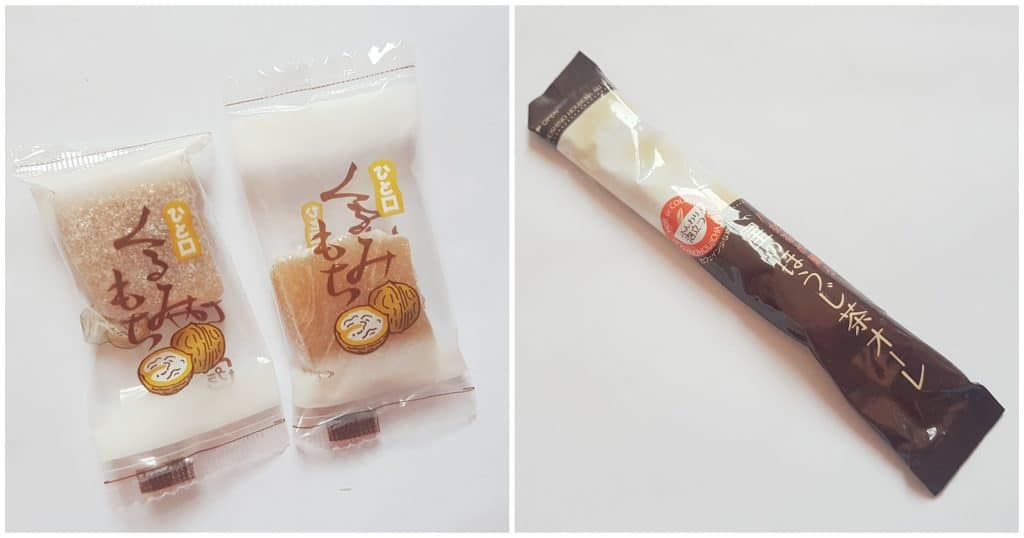 The delicious nutty soft mochi contains lots of chopped walnuts, and the umami flavour is enhanced by a slight hint of soy sauce.

Hojicha tea also has nutty and sweet notes, and this is a wonderful instant creamy latte version that can be drunk hot or cold. Perfect for the coming cooler evenings.

Sentouchi lemons are a sweeter version of the common lemon, and the flavour complements the lovely sticky texture of the mochi.

Chinsuko is similar in texture to shortbread, and is a traditional cookie from Okinawa. This chocolate version has a seriously deep chocolate flavour, and while the salt may seem a surprise addition, it actually brings out the sweeter notes of the rich chocolate.

A rabbit features in the traditional Japanese folktale of the Rabbit on the Moon (you can read it in the booklet!) and the name of this round soft bun translates to ‘rabbit’s tail’. It’s flavored with green tea and filled with cream, most delicious.

This little cake is all about the intense chocolate taste: it’s covered with chocolate couverture and contains rum, which intensifies the flavour even more for a seriously decadent treat!

This lovely crumbly cookie contains black sesame seeds which give it a slightly earthy, nutty flavour. It’s a favourite ingredient in Japanese desserts, and gives an almost savory edge to the buttery sweet taste. This cookies as also exclusive to Bokksu!

Baumkuchen may have originally been from Germany, but the Japanese have embraced them and made them their own! It’s a soft dense cake in the shape of a ring, with the classic Japanese flavour of Matcha. One of the most distinctive things is the multiple layers of cake batter which makes the cake look rather like the rings of a tree.

These chips are made with chili oil which is the specialty of this island of the Okinawa Prefecture. They’re pretty spicy too, so watch out!

The translation of the first part of the name of this snack is ‘shocked?!’ and it’s Okinawan dialect. The reason you might be shocked is that chinsuko is traditionally sweet (see the chocolate version above!) but this version is both cheesy and spicy, so it might not be what you’re expecting! However it’s very good and the savory taste works beautifully with the texture.

Corn potage is a delicious creamy and rich sweetcorn soup that is commonly eaten in late summer and early autumn. These delicious crispy potato snacks have all the delicious corn flavour of the soup, very tasty indeed. 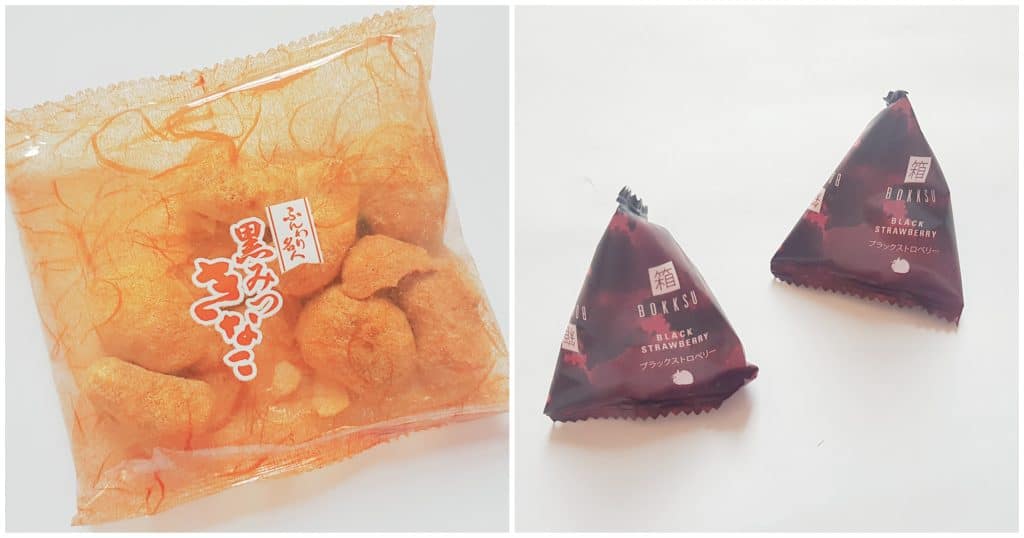 I’m always delighted to see these in Bokksu as they’re some of my favourites! Mochi puffs are an amazing treat that takes mochi rice and transforms it into the lightest and crispest puffs. They come in a variety of flavours, but this one I think is the best: they’re covered in caramelly brown sugar syrup and then coated with kinako, delicious roasted soybean powder. It has the most amazing flavour, sweet-savory and nutty, almost like peanut butter.

The Black Strawberry is a new version of another incredibly treat that appears in Bokksu from time to time. They are freeze-dried strawberries which are soaked and infused with chocolate for the most incredibly intense fruit and chocolate flavour. Previous versions have been white chocolate, which are mazing, but these are infused with dark chocolate! Less sweet than the white chocolate but the combination is no less wonderful.