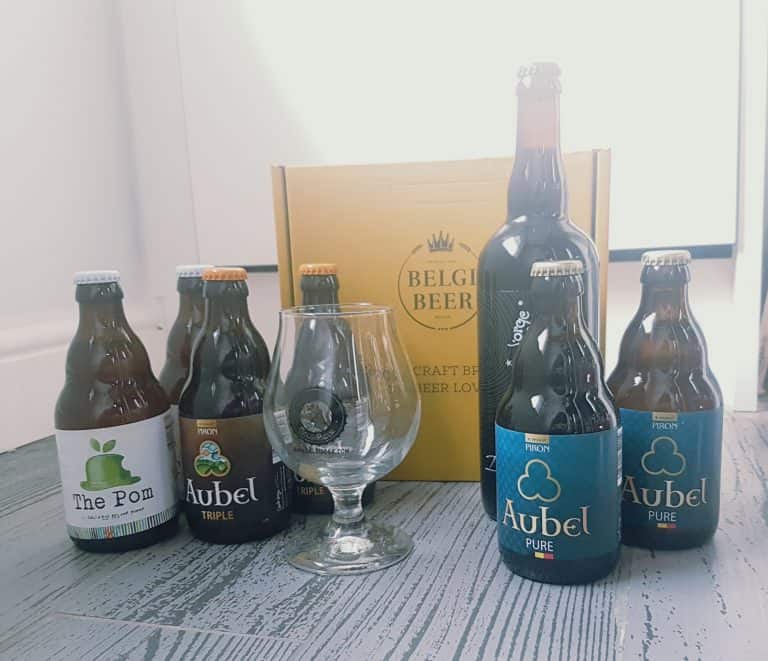 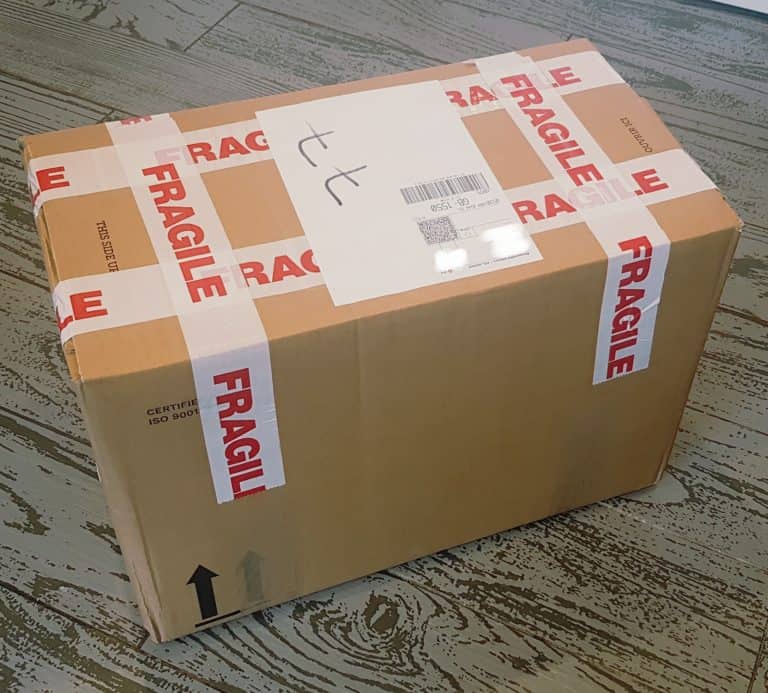 The box I was sent actually contained seven beers, 6 x 330ml and 1 x 660ml, which I guess is the equivalent of eight beers! 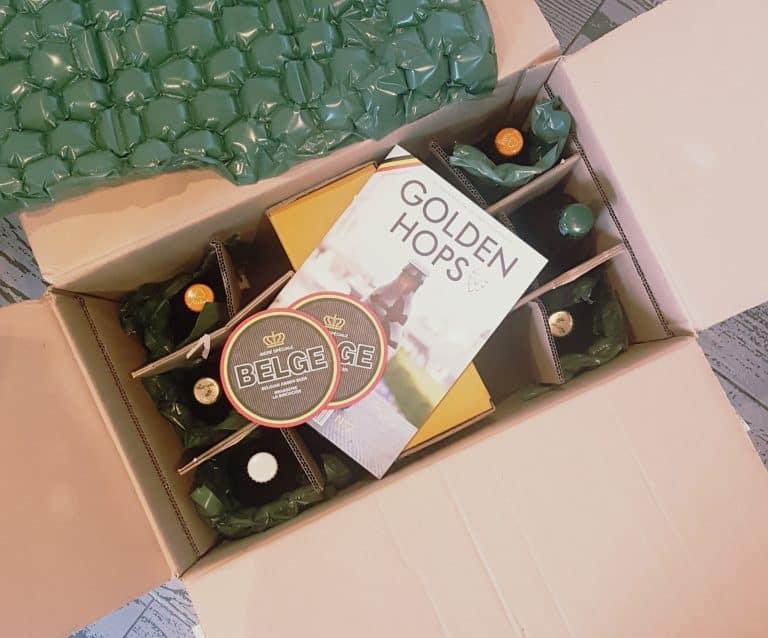 The packaging, needless to say, is excellent. The bottles were all securely packed and padded.

On the top you can see the magazine plus the ‘surprise’: two beer mats. 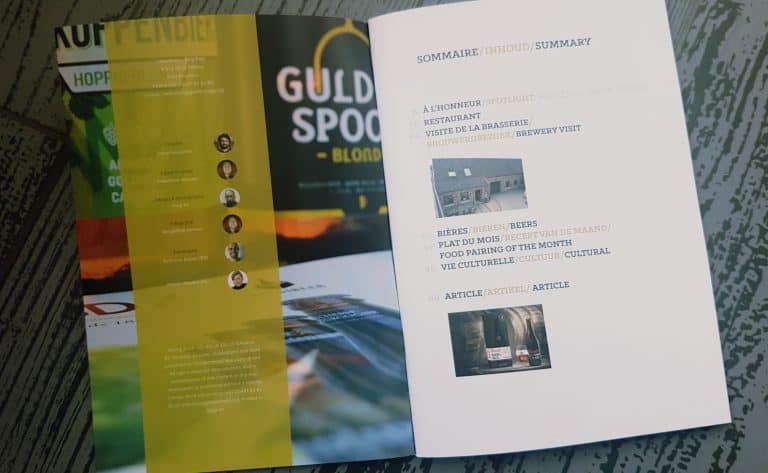 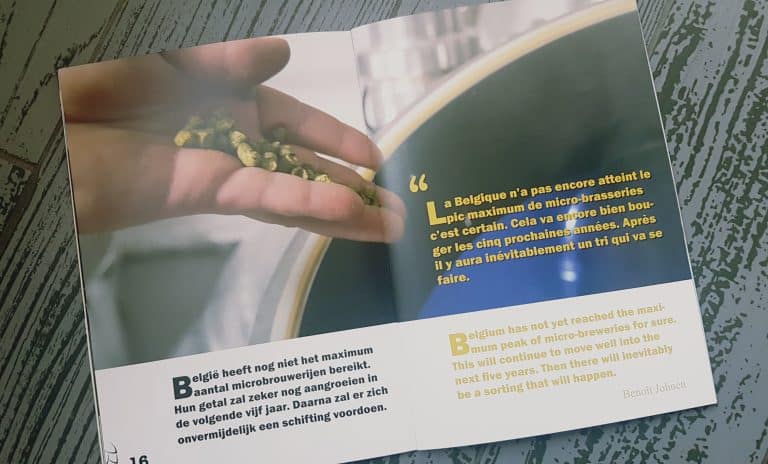 The magazine is nicely produced, and the text is in three languages: English, French and Flemish (Belgian Dutch).

It contains some interesting stuff about this month’s featured brewery and its surroundings, and of course contains information about each beer in the box. You’ll see that later. 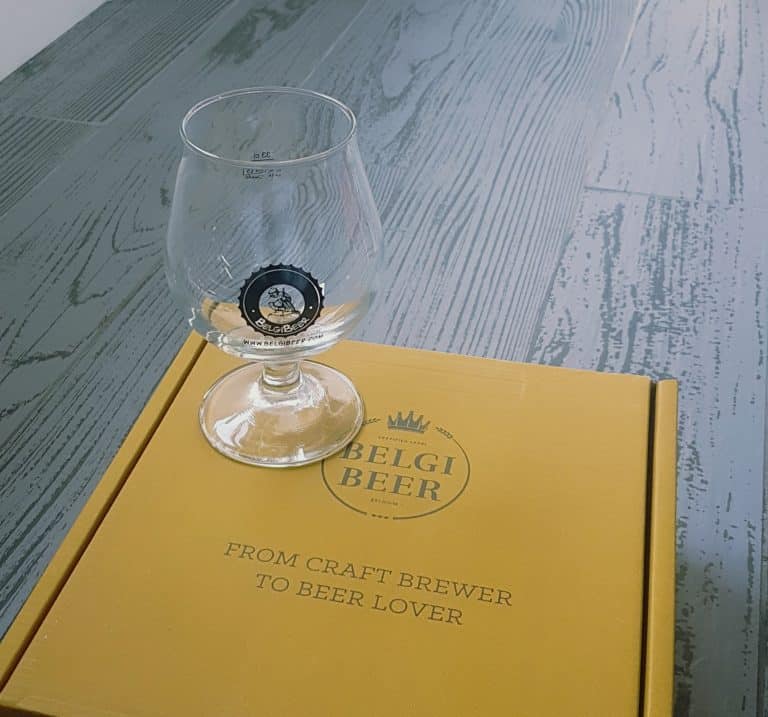 This is the glass that was included.

I guess the brewery didn’t provide their branded glasses this time, so this is just a regular Belgibeer glass. It’s the perfect shape, and looks lovely!

So here are the beers in this month’s box. (Sorry about the weird light). You can see the big bottle at the back.

I was slightly surprised to find that it was two each of four different beers, but I guess it’s simply doubling the smaller four-bottle box. 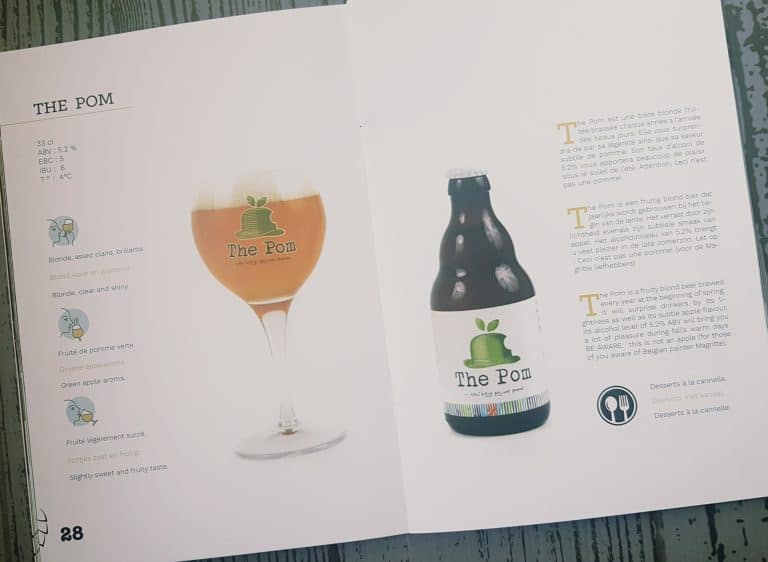 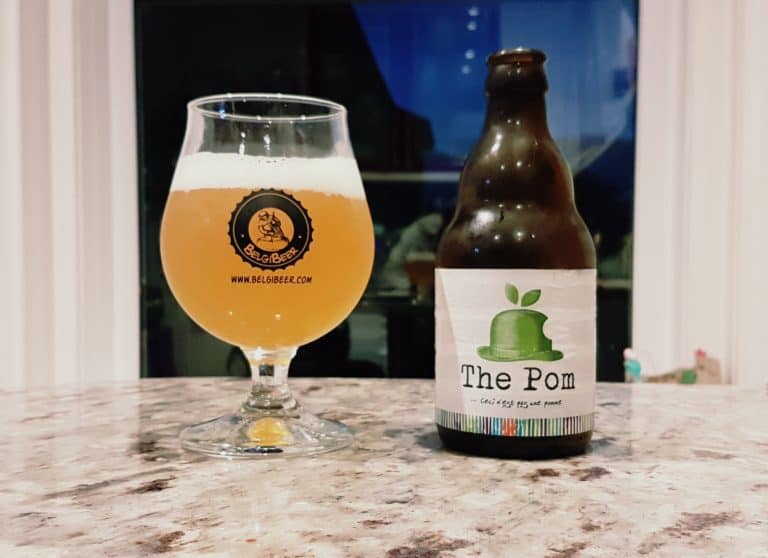 This was the first one I tried. On a totally superficial level I loved the label design of a play on the famous Magritte painting. And of course the name is a play on ‘pomme’. At least, I assume it is.

I also really enjoyed drinking it. As the name suggests, it has has a fruity, definitely apple-y flavour.

The flavour as well as the colour is very light and delicate, with a tiny bit of bitter undertone, but you can definitely taste the strength of the alcohol underneath. 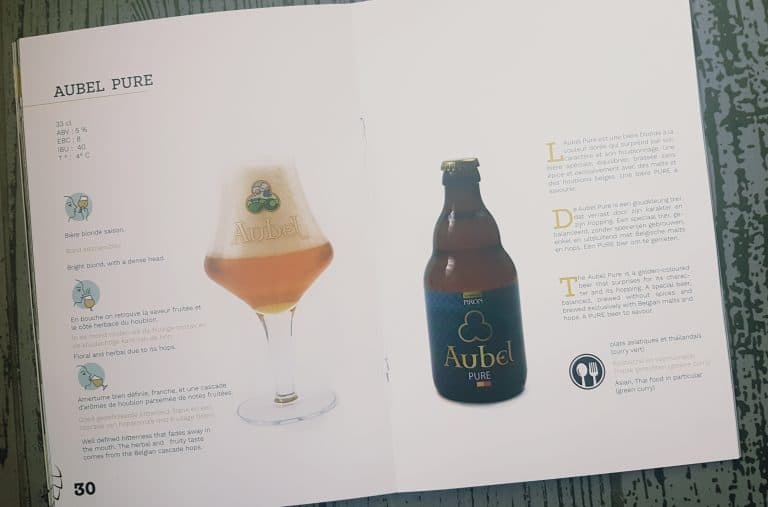 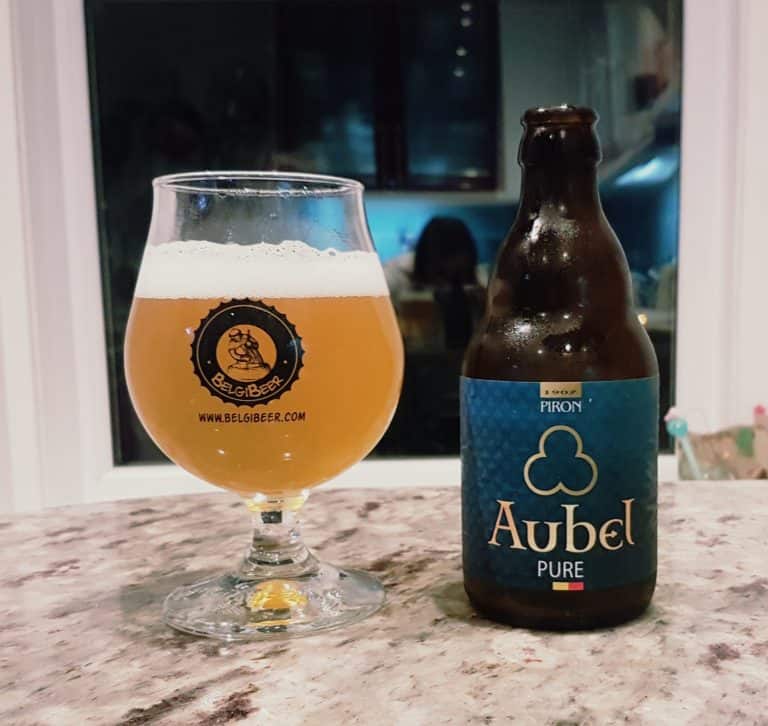 This one has quite a fruity smell, but tasted more bitter than the Pom. Despite the bitterness, it was quite refreshing, and the flavour was moderately light. 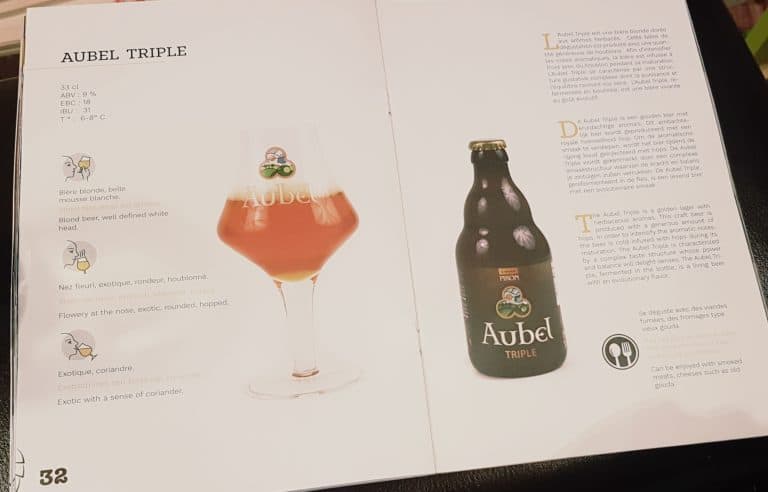 (I just realised that I had failed to take a picture of this page before, so I just photographed it right now on the arm of the sofa as I write. This is why it has a couple of weird shadows. Sorry.) 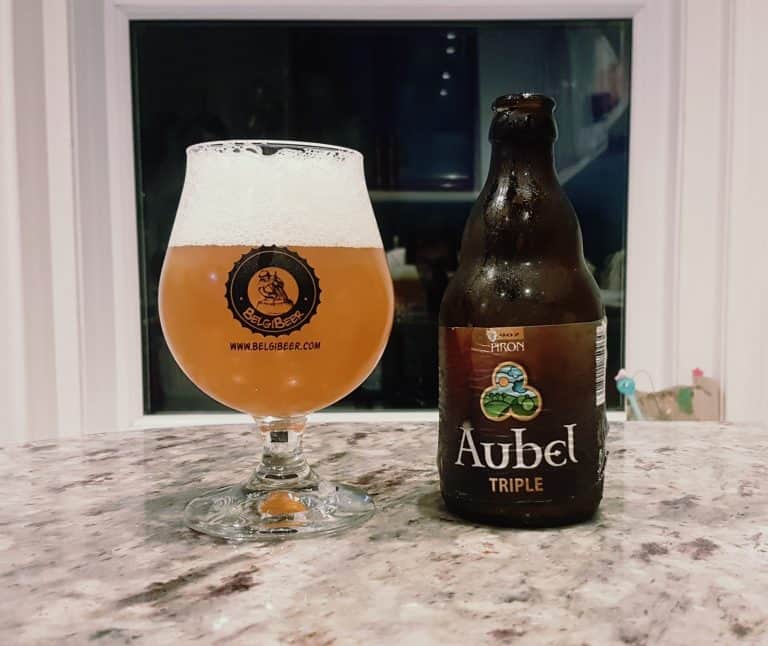 Well, this one certainly had a kick!

It also had a fruity smell, but much richer and darker than the Pom or the Pure. It smelled almost savory. The flavour was surprisingly dark and bitter. There was a tiny hint of fruit at the end, but mostly it was dark and heavy. 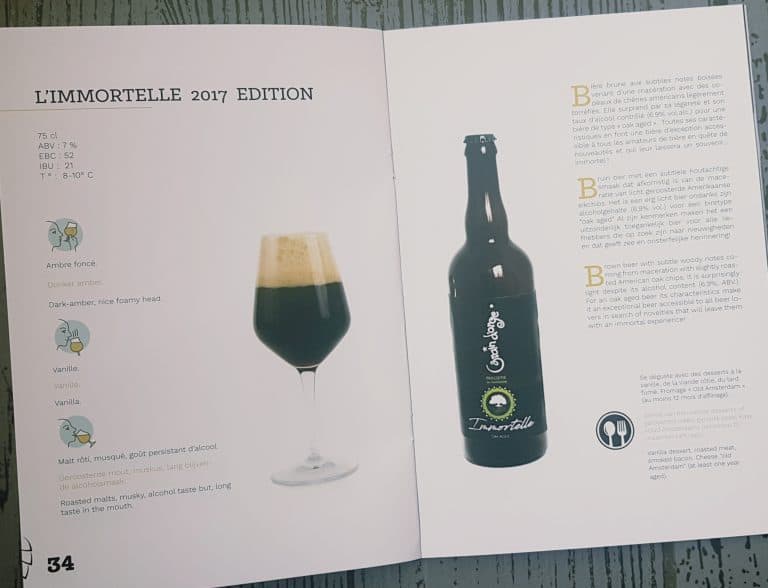 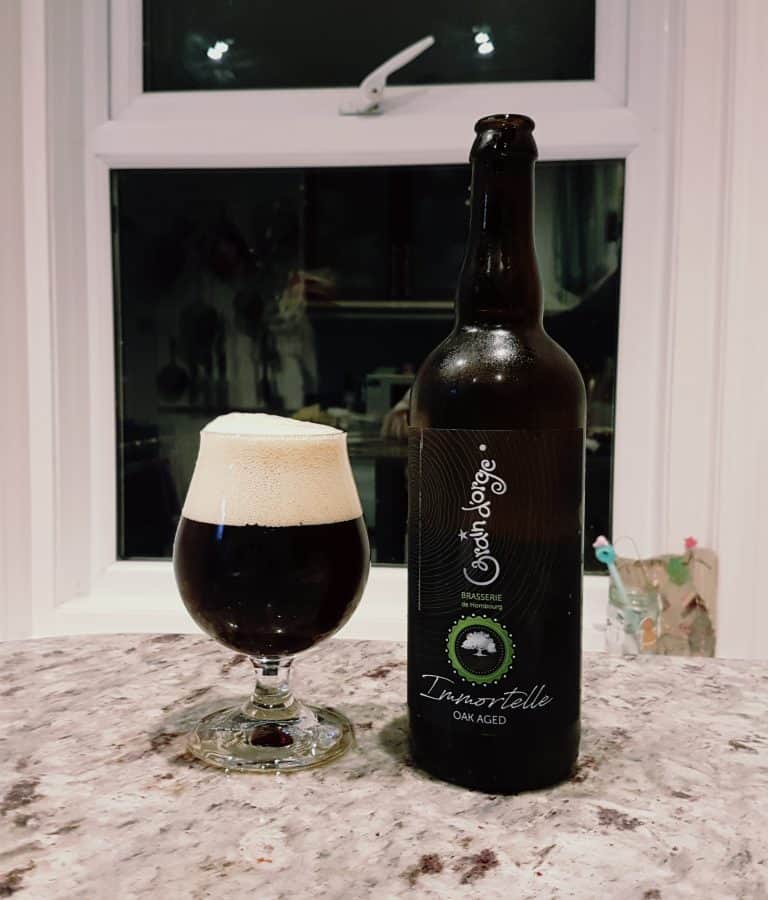 This beer had a very rich smell, with a tiny touch of apple and vanilla. The flavour was very dark, malt and caramel, with strong savory overtones.

This was a very interesting box. While I’ve been to Belgium a bunch of times, and have drunk Belgian beer in bars, I’m a long way from being an expert. I also love Belgian fruit beer, so it was nice to try some other things.

The Pom, while not an official ‘fruit beer’ I think, was still beautifully fruity, and was my favourite by a long shot.

My least favourite was the L’Immortelle, simply because I found it too heavy. The other two were ok to nice, but I wouldn’t necessarily choose to buy them again.

That being said, I really enjoyed the process of trying them. It’s something of a novelty to really pay attention to drinking something to which you’re not accustomed, so it’s always good to drink thoughtfully!

I have to say I was slightly disappointed there were only four different beers, but that may be because I’ve just reviewed Beer52, which had ten different beers in the box! Again, I understand they basically take four beers and then double them up for the big box, but I do enjoy lots of variety.

However, this was still an enjoyable experience, and it’s always a pleasure to explore new flavours. It’s also very useful to be able to refine your own tastes and increase your knowledge.

One thing I think is excellent about this box is that it focuses on just one brewery. You can see some of the range of beers created by just one place.

As for the ‘surprise’, I don’t have a thing for beer mats (some people do) so I wasn’t particularly bothered by those. I very much appreciated the glass (my husband has borrowed it more than once for his beer!), though I do wish it had been the Pom glass pictured in the magazine – that looks gorgeous!

So, if you’d like to explore Belgian craft beer, especially based on individual breweries’ ranges, this is a great box. Oh, and of course all the usual gifting suggestions!