Reviewed by Rebecca on 9th November 2016 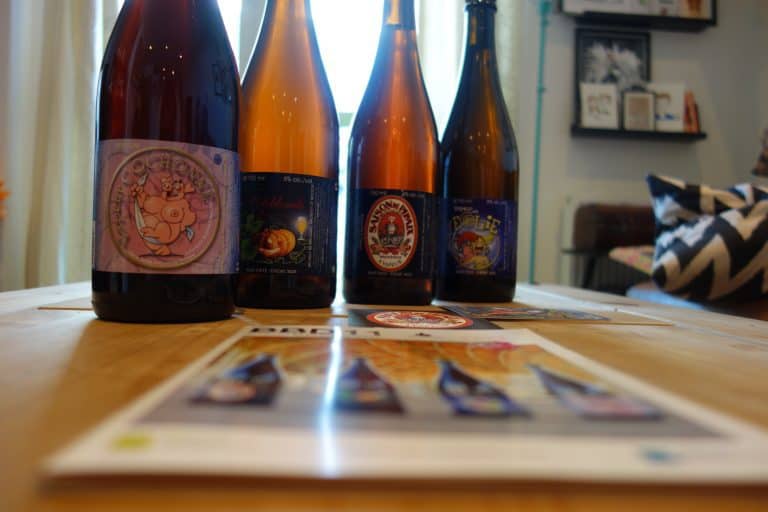 Continuing in their plight to promote a range of small, independent Belgian breweries, the Belgibeer team have uncovered another unusual specimen: La Brasserie à Vapeur. In the small town of Pipaix in the Wallon region, they brew with the help of a steam engine, which also powers the entire brewery. Although the original brewery dates back to the 18th century, it was purchased and saved from ruin by Jean-Louis and Sittelle Dits. Since then, it has released beers that are characterised by intense flavour from spices and only minimal hopping. La Cochonne is a beer that was first brewed on the 29 February 1992 (a leap year) to a warm reception, so a second batch followed the following year. It is now the brewery’s flagship beer.

Unlike previous months, where Belgibeer boxes have included 8 individual 330ml bottles, there are only four sharing size bottles (750 ml). Two of the bottles are branded with playful cartoon labels featuring a pig towelling itself off and a female jester. The other two depict a grinning jack o’ lantern and a steam powered contraption. The quirky branding immediately struck me, so I was eager to see whether the beer stood up to this nuance towards a zany side. Inside the Belgian Beer Discover, the accompanying magazine, some of the illustrations were provided by the artist who designed the cartoon labels, which was a nice touch. 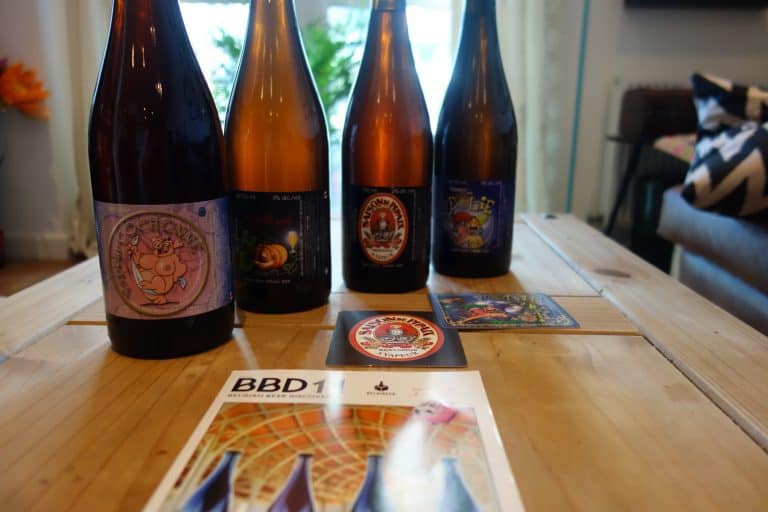 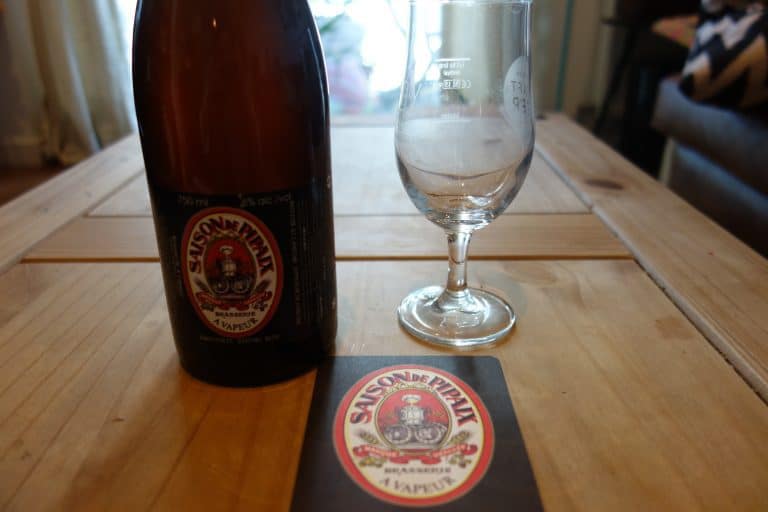 Popping open the bottle of the Saison de Pipaix, I was excited to sample La Brasserie à Vapeur’s oldest beer, a saison brewed since 1785. All the modern iterations of saisons that I enjoy today hark back to a very simple tradition of farmers brewing something for the farmhands during the sweltering summer months. This beer is a classic rendition of the style – albeit with a slightly higher ABV than would be expected to make this a more sessionable thirst-quencher – but all of the characteristic flavours are discernible. Pouring a hazy golden colour, aromas of spices and orange peel jump from the glass. In the mouth, it’s a joyously creamy texture accompanied with flavours of ginger and pepper with some refreshing sour notes. This is a very good and easily drinkable beer with a recipe that has stood the text of time. 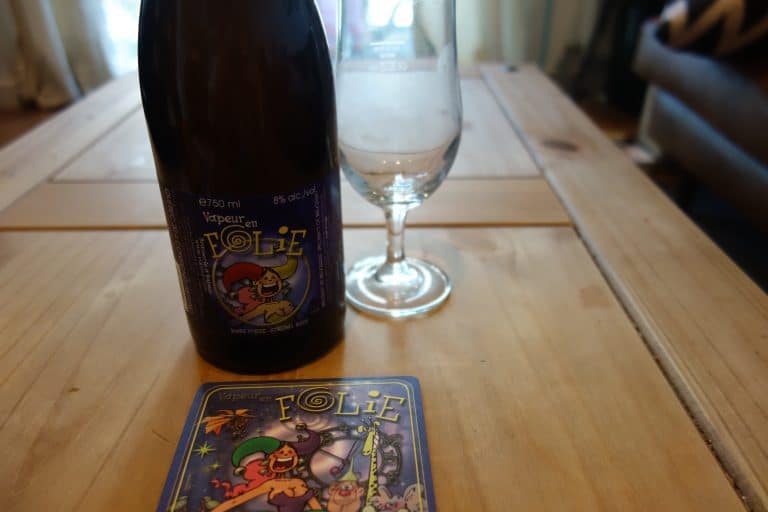 Shifting from the old to something a bit more modern, Vapeur en Folie is a Belgian Strong Blonde with similar qualities to the Pipaix saison. With an ABV of 8%, the label serves as a warning to those who consume it too readily – they might find themselves acting the fool (hence the laughing jester image). In the glass, it’s another hazy golden gem with a more subdued spicy nose. It lacks the strong spices and sourness of the Pipaix, presenting a richer and more balanced flavour profile. Even with its strong alcoholic content, this is an easy drinker. 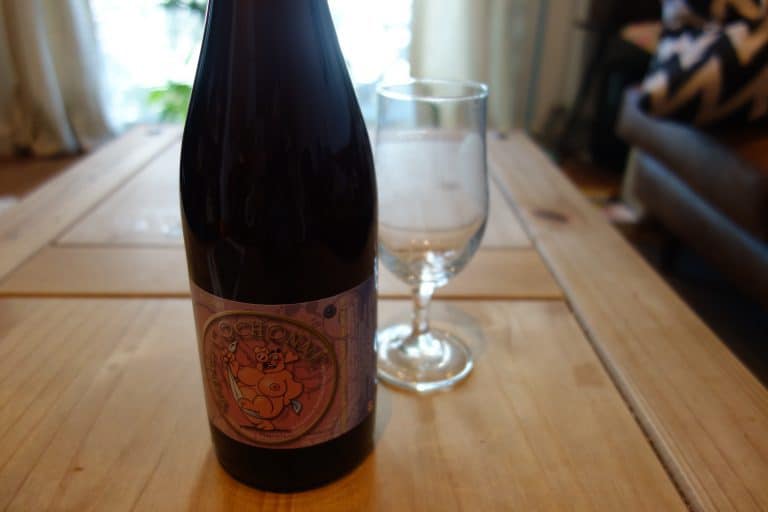 Another Belgian Strong Ale is include din November’s box in the form of Vapeur Cochonne, which is the brewery’s most popular annual release. It’s a much darker beer, hinting at sweeter, maltier notes. It is aesthetically pleasing, with its dark amber body and frothy white head. The aromas are undeniably fruity with some sweet caramel and the flavours are surprisingly pronounced, with hints of spices and fruits. Unlike the blondes, which are ideal for sitting under a hot sun, this darker beer is perfect for the colder months and around the Christmas season. It’s comforting and would stand up to a festive cheeseboard.

Finally, the Vapeur Potiblonde returns to the blonde style, but this is interesting because it’s a fruit beer flavoured with pumpkin. Pumpkin has become a seasonal favourite among breweries in the past years, but it’s very divisive. Some pumpkin beers are laden with cloying sweetness, resulting in something akin to liquefied pumpkin pie.  Others are much more delicate and redeem the whole concept. This particular take on a pumpkin beer is more of the latter, demonstrating juicy orange aromas with some spices. It is very refreshing and slightly sweet in taste with only a hint of spices and a slight bitterness from the earthy hops. All in all, it’s a solid rendition of a fruit beer that really appealed to me.

In addition to this month’s beer selection, inside the Belgian Beer Discoverer is a recipe for shrimp beignets to match with the Vapeur Cochonne with a piquant sauce to enhance the spicy flavour notes in the beer.

Belgibeer can be subscribed to or gifted. The monthly boxes include two bottles of four beers (eight in total). Subscriptions can be purchased for a one-off box (27.90 €), or three (23.90€ per month), six (21.90€ per month) or twelve months (19.90€ per month), all prices exclude shipping. That works out to be approximately £23 for eight beers as a one-off delivery. Other additional Belgian produce or brewery glasses can be added to your order as well- it’s traditional for each Belgian brewery to have its own glass.

I really enjoyed the diversity of this month’s beers, especially the inclusion of a pumpkin beer, which is perfect for autumn cravings. From traditional to more modern takes on beer styles, La Brasserie à Vapeur is producing a good range that I’d happily hunt down again.

Another great box from Belgibeer that has tickled my palate and fuelled my love for a diversity of Belgian brews.