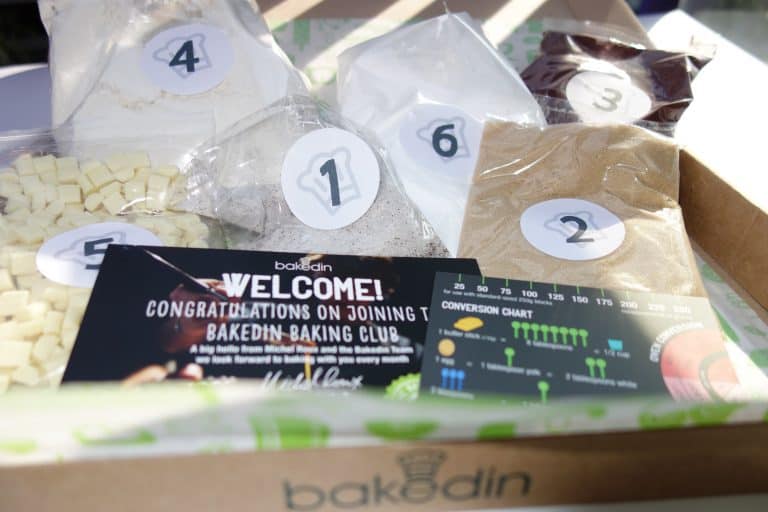 Some of us dream of unveiling a bake to approving nods from Paul Hollywood, Mary Berry and clinching the distinction of Star Baker. But instead, we struggle with uneven oven temperatures, roughly measured ingredients and are met with a sunken cake, a soggy bottom or a complete crumbly mess. Baking is alchemy, but often spoiled by perplexing UK/US units, replacement of ingredients as our larder fails us and the oh-so-dreaded clearing up. Who says that it’s cathartic?

There’s indisputably a sense of fulfilment in baking from scratch, however. It allows us to boast and prompts nods of approval from our peers. So where’s the middle ground, where we can use our own fair hands but streamline the process to be accurate, quick and achieve the intended delicious results? Next to having a personal assistant, the answer was obvious to the team at Bakedin: pre-measured ingredients, a fool proof recipe and a simplified process requiring as little cleaning up as possible.

The Bakedin Baking Club subscription box is an all-inclusive baking kit sent straight to your door. If that wasn’t appealing enough, each recipe is approved first-hand by Michel Roux, godfather of modern restaurant cuisine in the United Kingdom, meaning that they haven’t merely been tried and tested, but come with a seal of approval from a culinary legend.

The recipes are guaranteed to please and the Bakedin team promise one crucial thing: subscribers need only baking tin and staple fresh ingredients (eggs, butter and milk) for each recipe. All ingredients arrive in individual bags, pre-measured and ready to use. A recipe card and measuring conversion chart are provided alongside supplemental tools, such as ziplock bags for icing and baking parchment sheets. So there’s no excuse to not get baking. 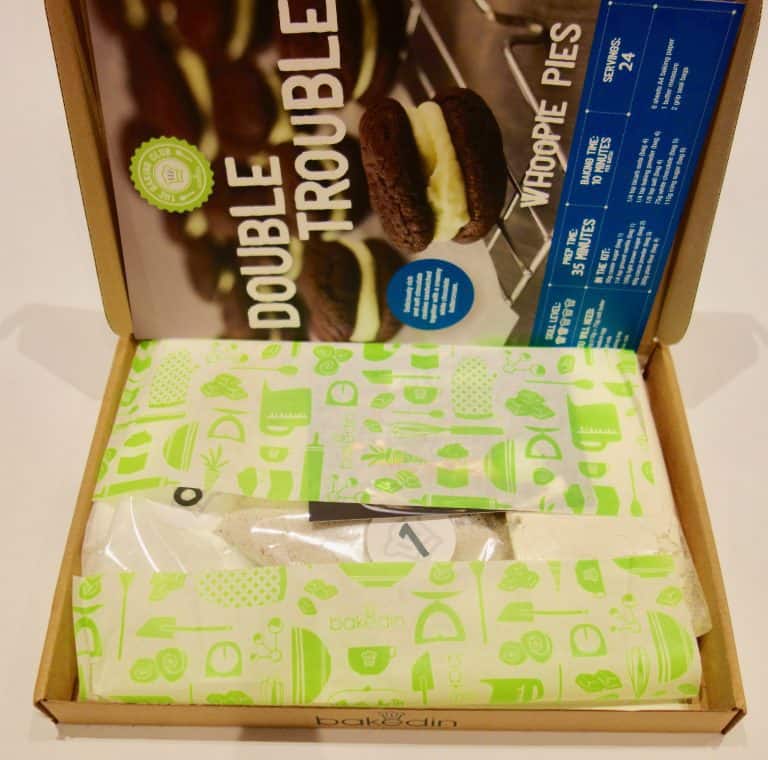 My beginner’s box arrived in slender cardboard packaging that was secured with tape. It’s designed to fit through most post-boxes for convenience. Opening it, all ingredients were coddled by a layer of tissue paper and numbered. I was excited to see that the recipe was for a indulgence that I’m very familiar with- but have never tired to reproduce: mini whoopee pies. 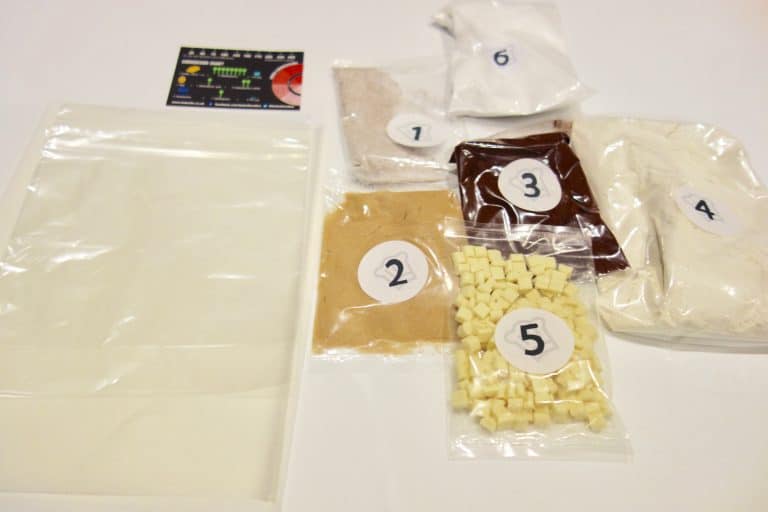 Putting aside a Saturday morning to have a crack at the recipe, the idea of the pre-measured ingredients appealed to me immensely; I recently had a mini disaster with an overly moist cake that I attributed to strange US measurements. There was no need to nip out for any ingredients either- I always have eggs, butter and milk on hand. I could literally get stuck in. 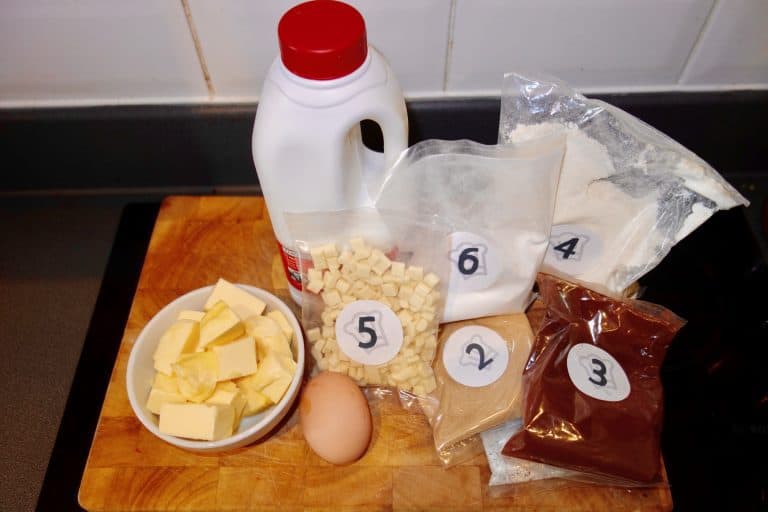 The recipe card is clear and accompanied with photographs of each step- it keeps everything as succinct and simple as possible. In fact, I was happy to divert from the card on some of the steps because I’m confident using a stand mixer (instead of trying to cream the sugar and butter myself) and I melted the chocolate in a bain-marie instead of pouring boiling water over the sealed bag. This was more out of habit, but mostly because I have the luxury of owning a stand mixer that I enjoying using. In any event, the results were the same. 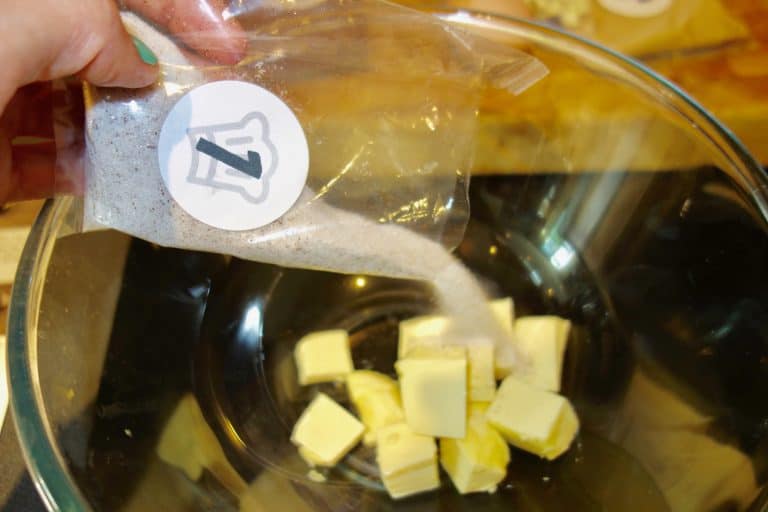 The first bag contained a mixture of caster sugar and vanilla- I combined this with the second bag of light brown sugar and creamed all with 110g of butter. Once mixed, in went one egg, the third bag of cocoa powder and the fourth bag of flour, bicarbonate of soda, baking powder and salt. This was mixed to produce spongy, wet chocolatey dough. Tossing the bags in the rubbish, this was a speedy and prodigious start. 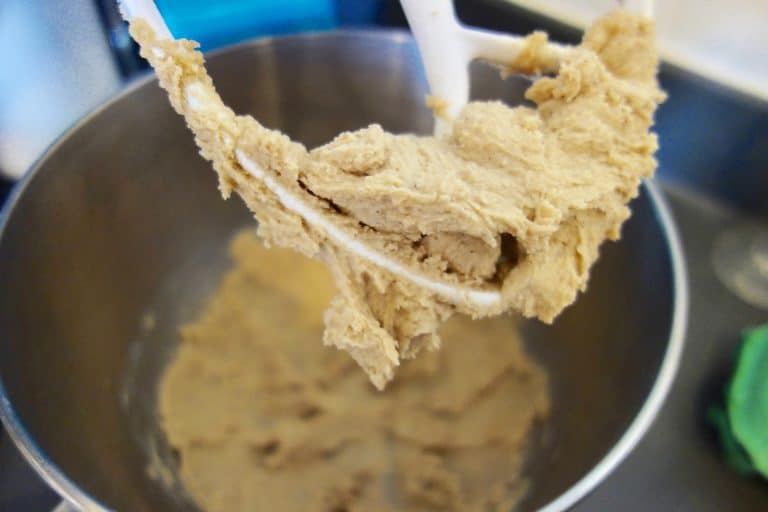 When everything was well mixed, the recipe called for 40 ml of milk- I just used skimmed- and it was ready to roll into a sausage shape. It was then wrapped in cling film and put into the fridge for twenty minutes, giving me time for a quick clean up. 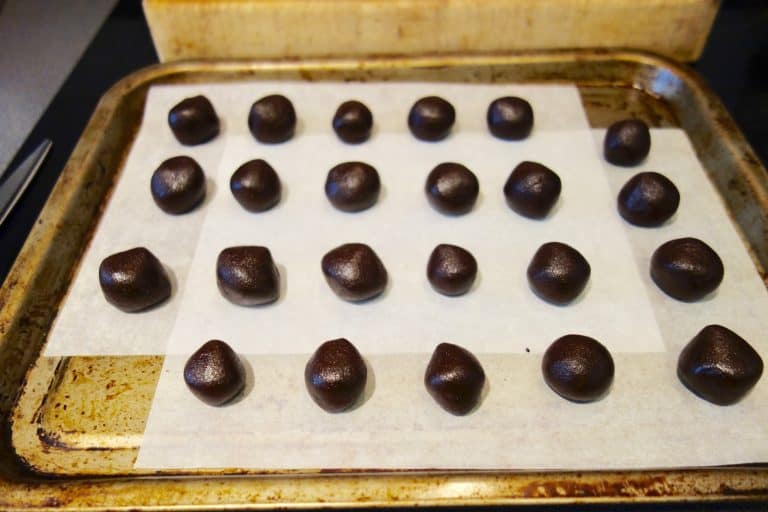 Removing the chocolate log from the fridge, I unwrapped and divided it into 48 equal pieces with a knife- this was a bit tricky, as I found the dough to be still a bit soft, but once the segments were rolled into balls, I was able to fix any imprecise division of dough. Rolling the 48 pieces in my palms, these were put on a baking tray and into the oven for 10 minutes in two batches. During this time, I prepared the buttercream filling. 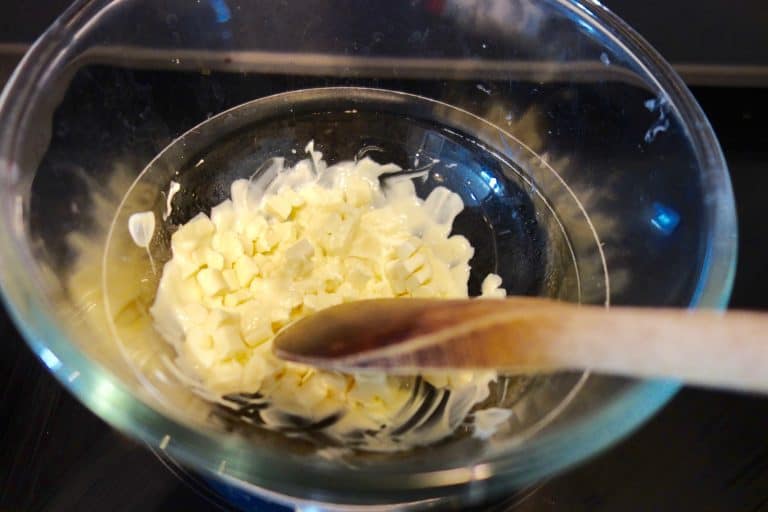 Decanting the white chocolate pieces in bag 5 into a glass bowl, I put this in a saucepan of simmering water and stirred until the chocolate melted. The recipe called for boiling water to be poured directly over the bag and to wait for five minutes, which will obviously result in less washing up. I added the last bag- the icing sugar- with 75g of butter and the melted chocolate and mixed until the buttercream was smooth and stiff. 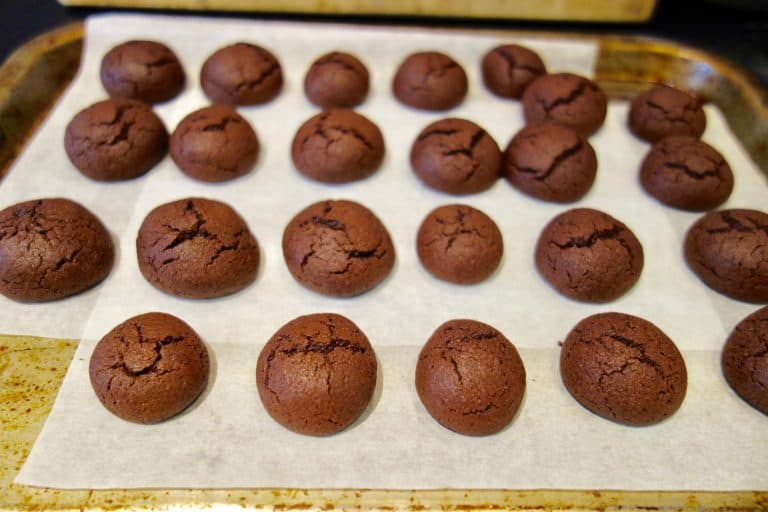 The buttercream was scooped into one of the plastic icing bags and placed in the fridge until the biscuits were cool. Turning half of the biscuits upside-down, I began icing their bases to provide the rich, delicious filling of each mini whoopee pie- no deft hand was required, as the filling was then sandwiched with another biscuit. The recipe yielded 24 mini whoopie pies. 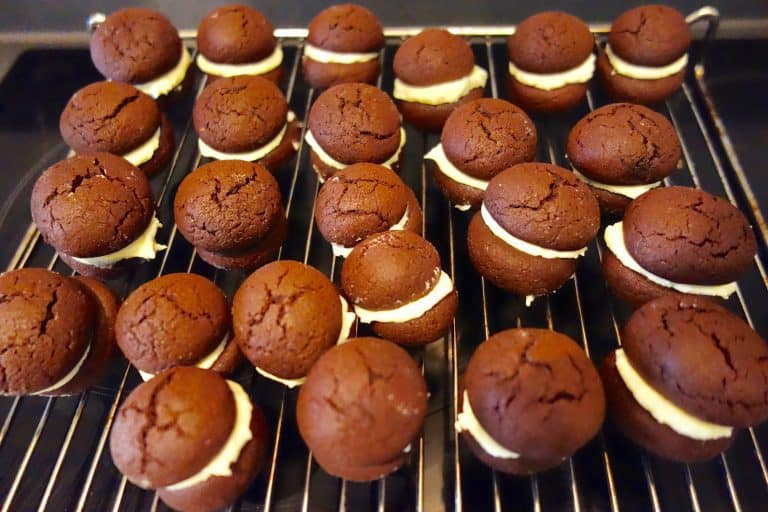 The entire baking process took me about 45 minutes and while I created more work for myself than strictly necessary, it was still relatively fuss-free and very gratifying. I especially liked following a new recipe without any dread or fear- everything was straightforward and nothing went awry during the mixing or baking.

I’m only a mildly experienced baker and was happy to follow this simple recipe for quick results- I was able to bring the final product to a gathering that afternoon and received a series of compliments, so it was a great way to look prepared without breaking a sweat. I would absolutely recommend Bakedin as a subscription box for anyone who is fairly confident or just curious around an oven. The recipe really caters to both intermediate and novice bakers and results were absolutely delicious.

Bakedin has three subscription options: monthly (£7.99), quarterly (£21.99) and half yearly (£39.99), all with postage and shipping included. It makes for an affordable treat that can be stored easily and reserved until you have a special occasion because only dry ingredients are included in the box. It also makes a lovely gift for anyone who says that they can’t bake or don’t have enough time for it.

For a rainy day or a Saturday morning, Bakedin guarantees a bit of baking therapy. It’s fantastic value for a quiet activity- or you could easily get someone else involved. I’m ready for the next baking challenge and, frankly, who doesn’t enjoy results that you can stuff in your face?

Bakedin Baking Club is the proof you need that you can bake without extra steps, measuring out ingredients or clearing up a sink of dishes.

How would you rate The Baking Club ? 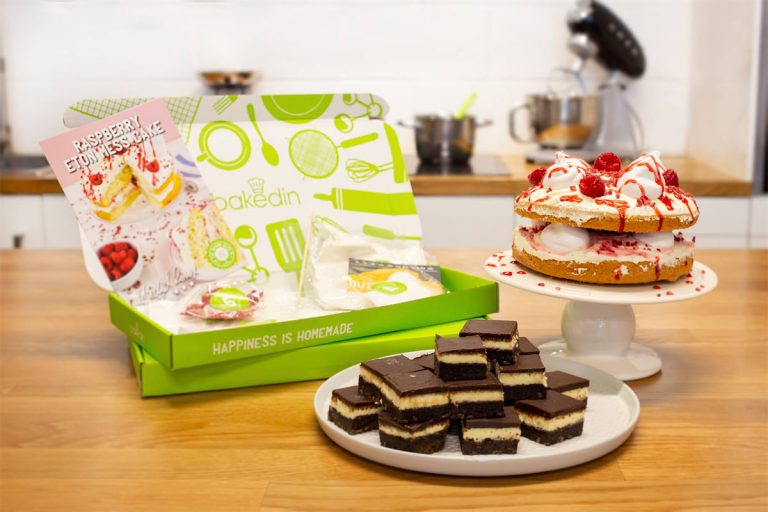 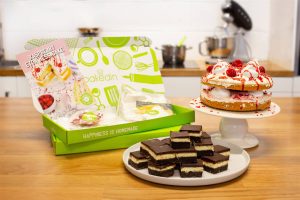