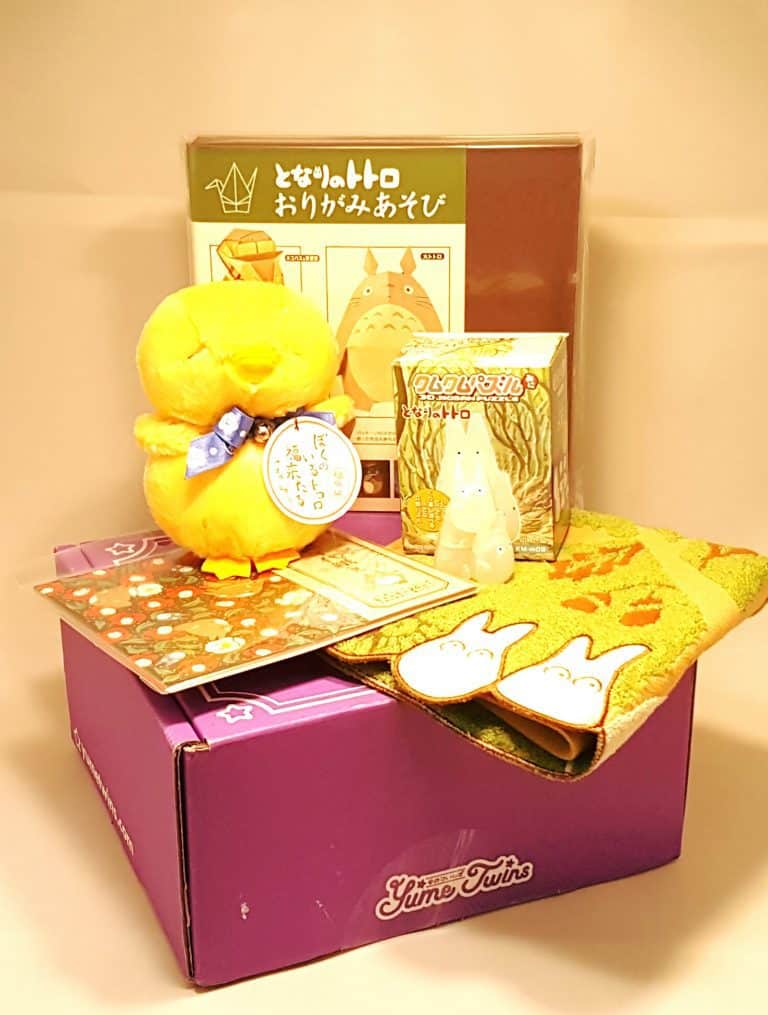 This month’s box had the theme ‘Totoro’. Totoro is the main character from the animated movie My Neighbor Totoro, a much-beloved movie and character in Japanese culture.

First the box. It was very sturdy, and arrived in perfect condition. 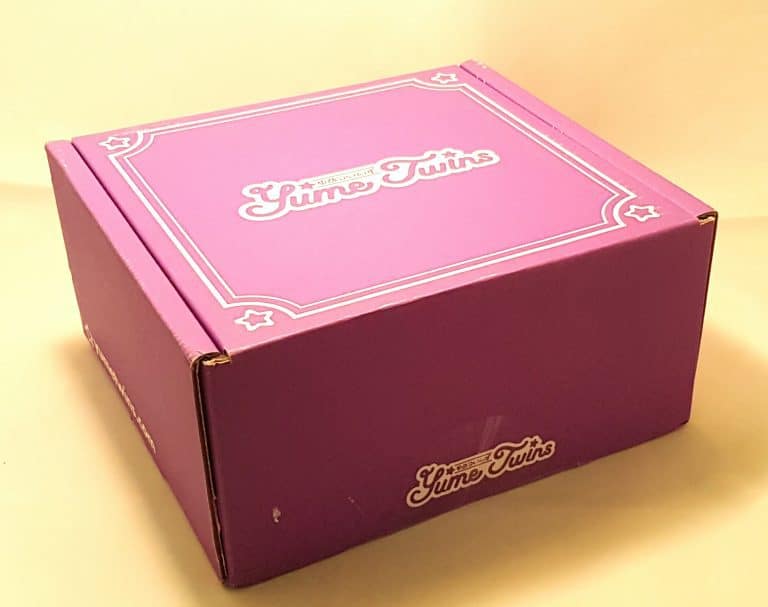 Opening it up, right on top was a magazine. 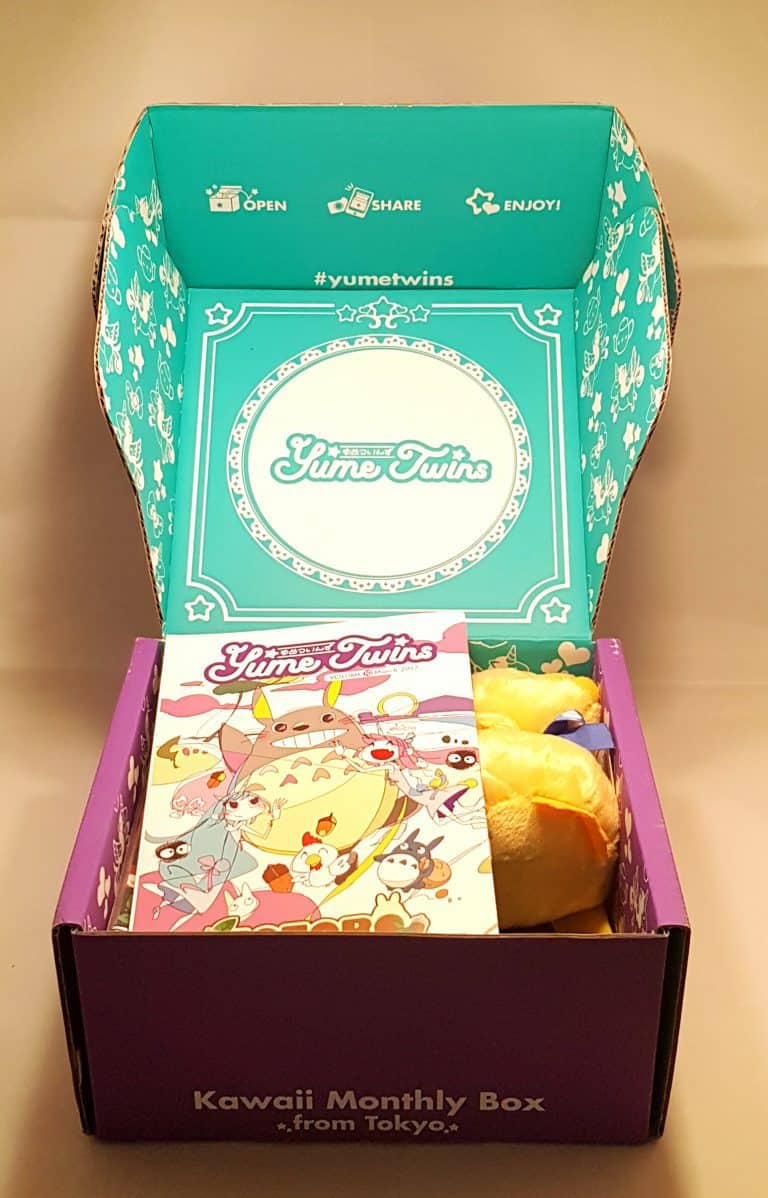 The TokyoTreat group of boxes do excellent magazine inserts for their boxes. It opens on the reverse, as do Japanese books, but fortunately it’s all in English. It introduces the theme, describes the contents, includes an origami step-by-step, and also contains a little extra information about competitions, and in this case, a paragraph about the Ghibli Museum, a museum of animation outside of Tokyo. This fitted in well with the theme, and sounded like a fascinating place to visit. 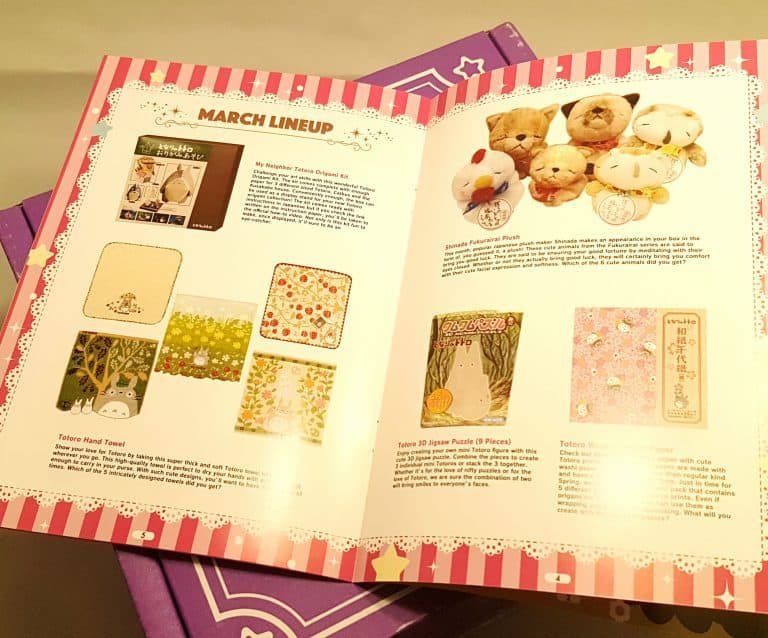 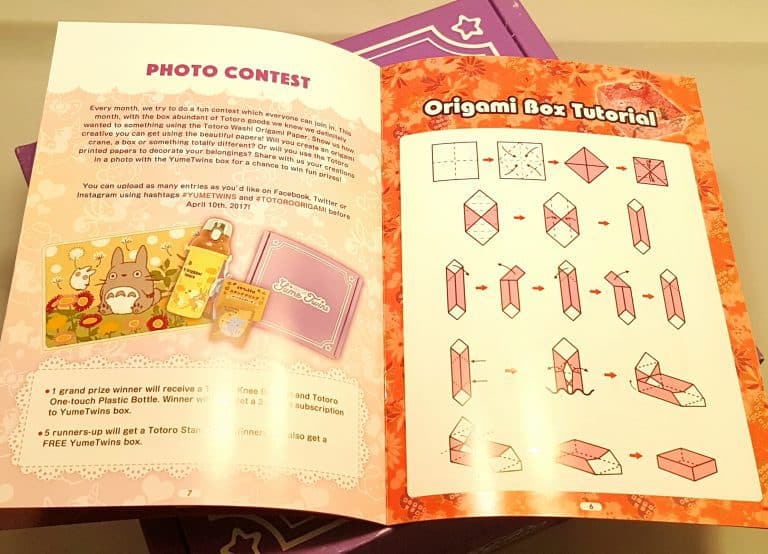 On to the actual contents. 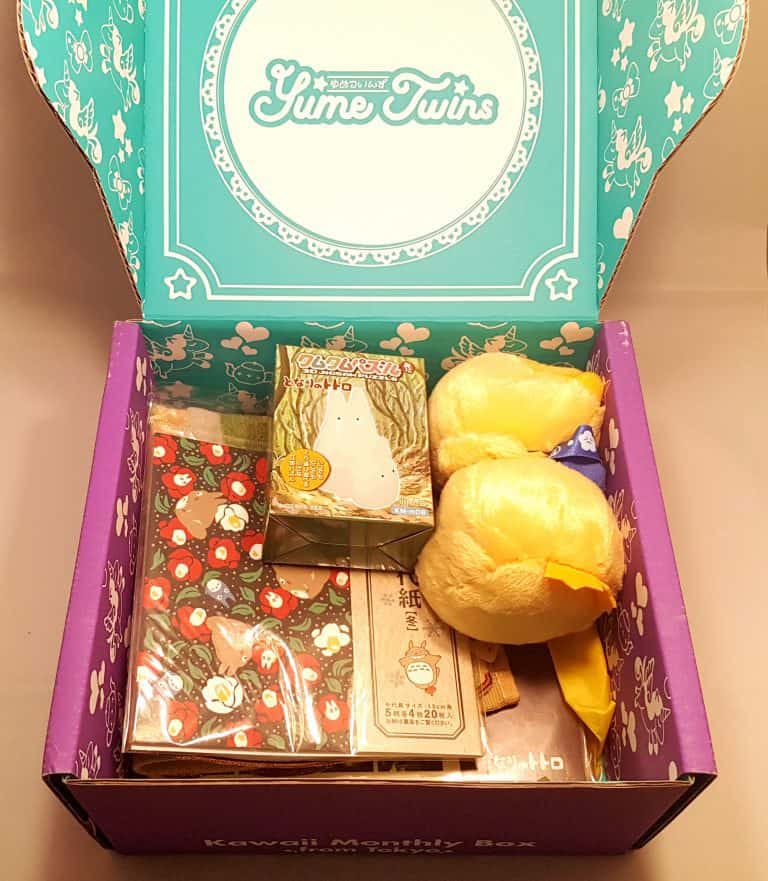 The first thing out was what looked like a little chick. 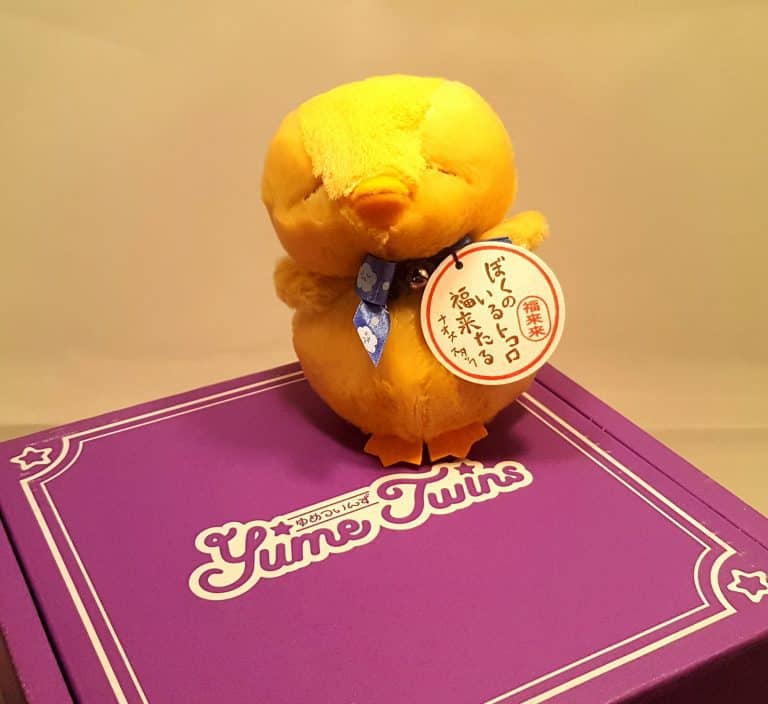 According to the magazine, this is a Shinada Fukurairai Plush, and they bring you good fortune, apparently by meditating with their eyes closed. I was slightly puzzled by this little guy because, cute though he certainly is, he’s actually not on the group of possibilities shown in the magazine. There are six little animals pictured, and none of them is a chick. Not that it really matters, and as a chick is kind of Easter-themed I’ll be saving him (her?) for my daughter’s Easter basket next month. 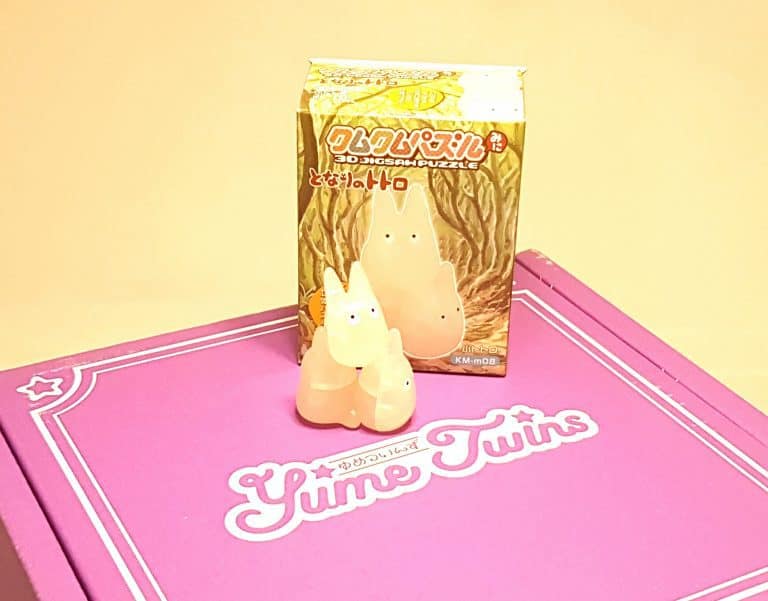 This is an interesting little item. It’s  a Totoro 3D puzzle. I decided to put it together for your viewing pleasure, and my god, I nearly threw it out the window. It took several minutes of squinting and fiddling before I figured out how to put it together. Because the picture is so pale it’s pretty much impossible to see any details, and it was incredibly frustrating to work out what it should look like. Once I worked it out it was actually very easy, but damn, it bugged me. Having put it together though, it is kind of cute. 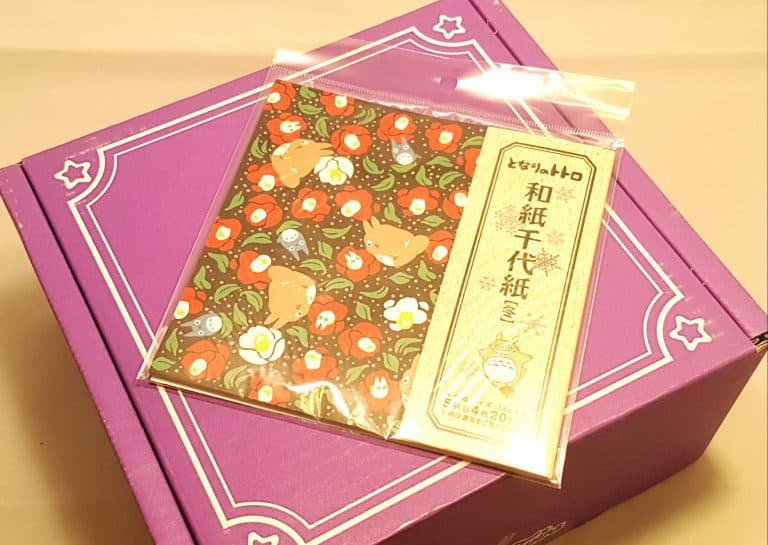 This is a pack of origami paper. It’s washi paper, which apparently is stronger and more textured than regular paper. According to the magazine it was going to be the Spring-themed Totoro prints. However an apologetic insert admitted that there was a shortage of the Spring theme paper, and so they replaced it with the Winter-themed version. It’s still pretty cute, the other sheets have Totoro amongst snowflakes and snowmen and things. Not exactly Springlike, but still pretty. 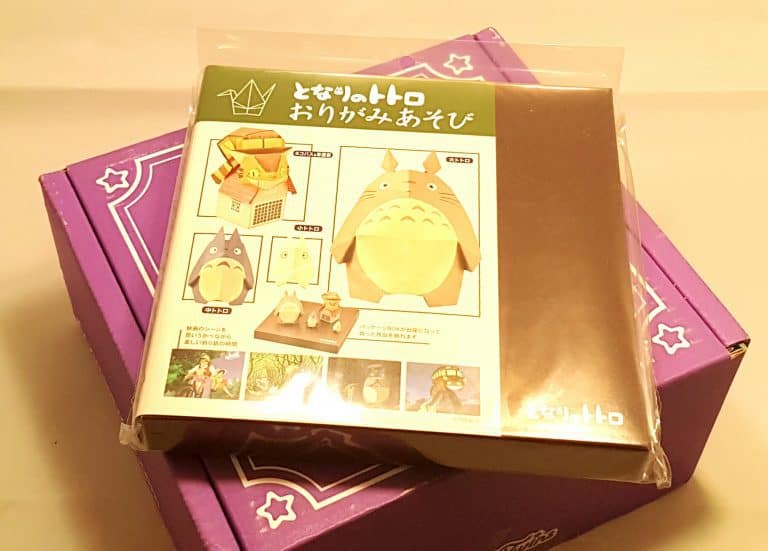 This is a Totoro-themed origami kit, from which you can make variously-sized models of some of the characters from Totoro movie. The instructions are in Japanese, but there is a link to a how-to video included in the pack. 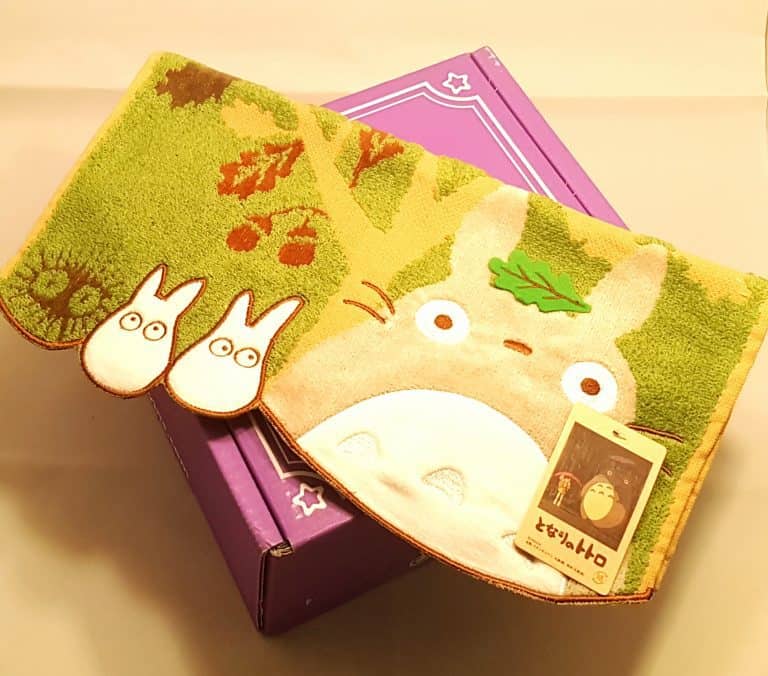 And finally, a Totoro hand towel. These are big in Japan; people often carry them around, and they are available in endless varieties and patterns, and because of their small size are popular souvenirs.  This was one of five possible designs, and it’s lovely, picturing Totoro under an oak tree. And look at his expression with the oak leaf on his head! I have a feeling my daughter might appropriate it as a blanket for her stuffed animals, not least because Totoro looks rather like a rabbit, and she loves rabbits.

So there you have it. Here are my thoughts:

First of all, value. I found three of these items on Amazon and together they’d cost more than the cost of the one month box, so you’re fine right there.

As to the contents in general, my feelings are mixed.

I don’t mind that there is a single character theme (with the exception of the plushie), not least because the character is adorable and I like being introduced to new things. The hand towel is lovely, and frustration aside, the 3D puzzle was fun for a few minutes. The plushie is cute, even though mine wasn’t listed. I think the ‘closed eyes meditation’ thing is unusual and interesting.

But. Having two paper/origami items felt like a cop-out. For someone who is really into origami I’m sure they would be awesome, but I’m not convinced that would be the case for the average person. One item, fine, it’s a novelty, and again it’s interesting learning something new. Or at least you can use (as they suggest) the paper for wrapping or scrapbooking.  But having two is just too much for me, and after the fiddling about with the puzzle the last thing I wanted to do was fiddle about with paper. Aside from the (lovely) towel, every item is simply ornamental. I know origami is something you actually do, but when it’s done it doesn’t do anything in of itself, and basically takes up space. And because paper isn’t exactly durable, a folded paper ornament isn’t exactly something you can keep long term. At least you can cuddle the plushie. The patterned paper will go into my stash of cute paper, because I do like to play with scrapbooking, and my daughter also loves arts and crafty stuff. I might attempt the origami kit at some point, but I don’t feel particularly positive towards it and I suspect it will end up being re-gifted.

As to the kawaii principle, all the items can be described as kawaii because Totoro is totally kawaii. Perhaps it’s my non-Japanese perception, but while the towel, plushie, and the puzzle (sort of) are definitely cute, I find the paper too uninteresting to spark any warm fuzzy cuteness in me. On a strictly monetary level I can see that you get your money’s worth in this particular box, but I still feel kind of unsatisfied. The one really fantastic item (towel) and the cute plushie made the other three items seem even less interesting. I did wonder if they were slightly limited in choosing just a single character to focus on, but Totoro is so immensely popular there are hundreds of kawaii novelty items with this theme out there. Having looked at the two previous boxes of their new five-item incarnation, both of which I think had a great range of items, this one comes a distant third. Hopefully they will up their game next month, because I think the principle of just five good-quality items with premium anime characters is excellent, and again, judging by previous boxes, this one just seems less well-thought-out than the others.