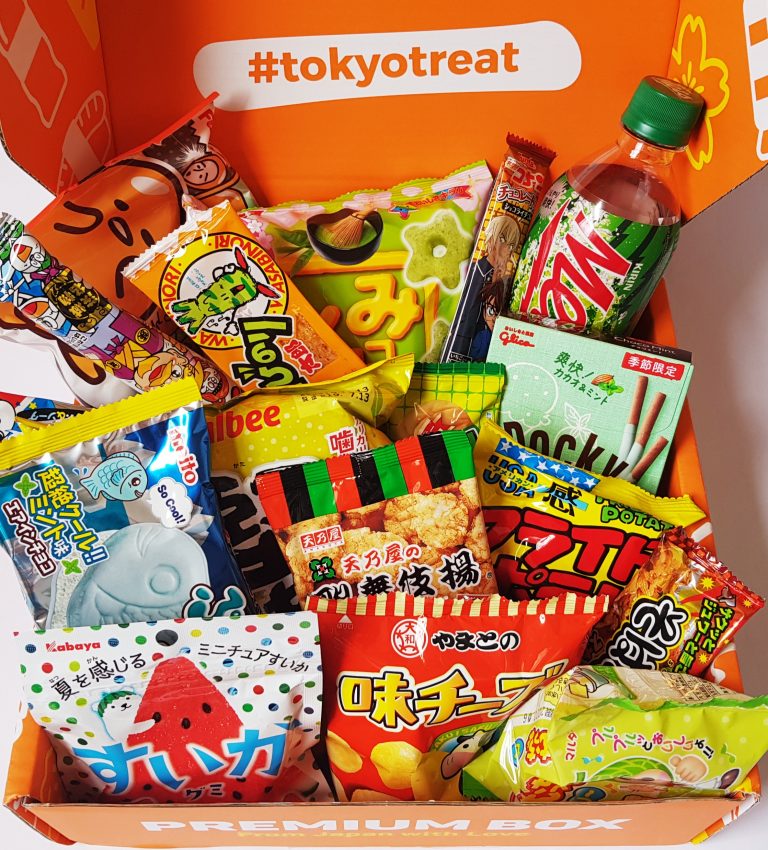 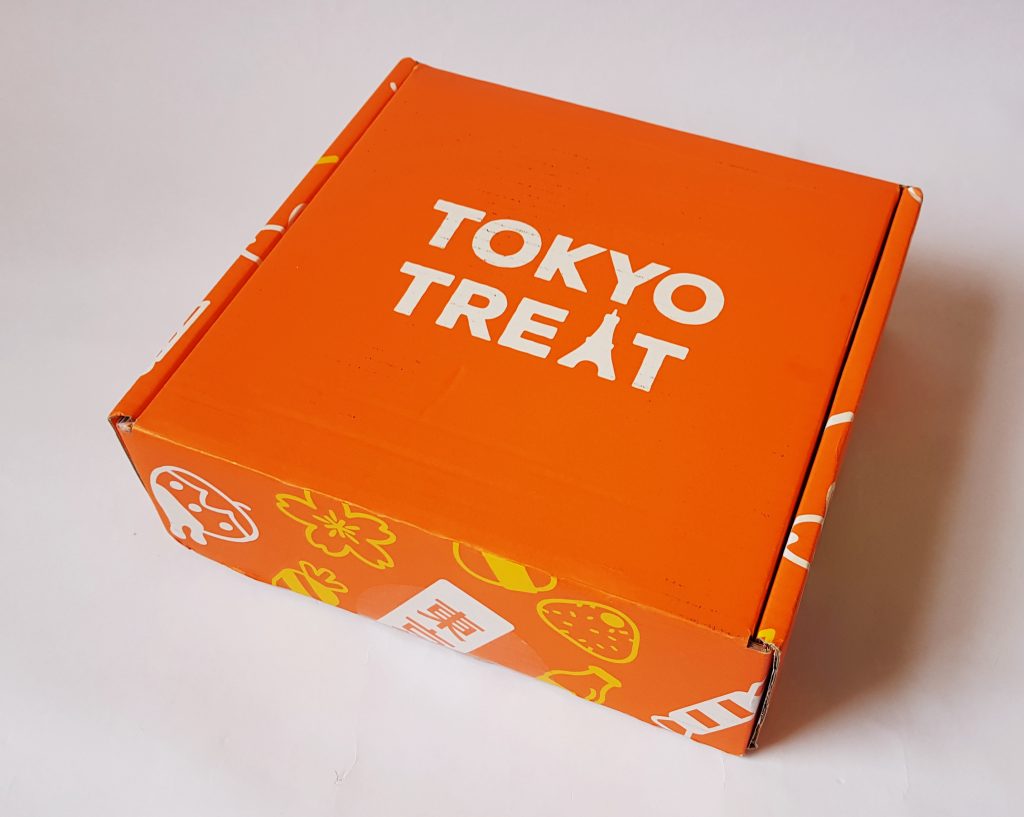 The box is pretty big, and stuffed full! 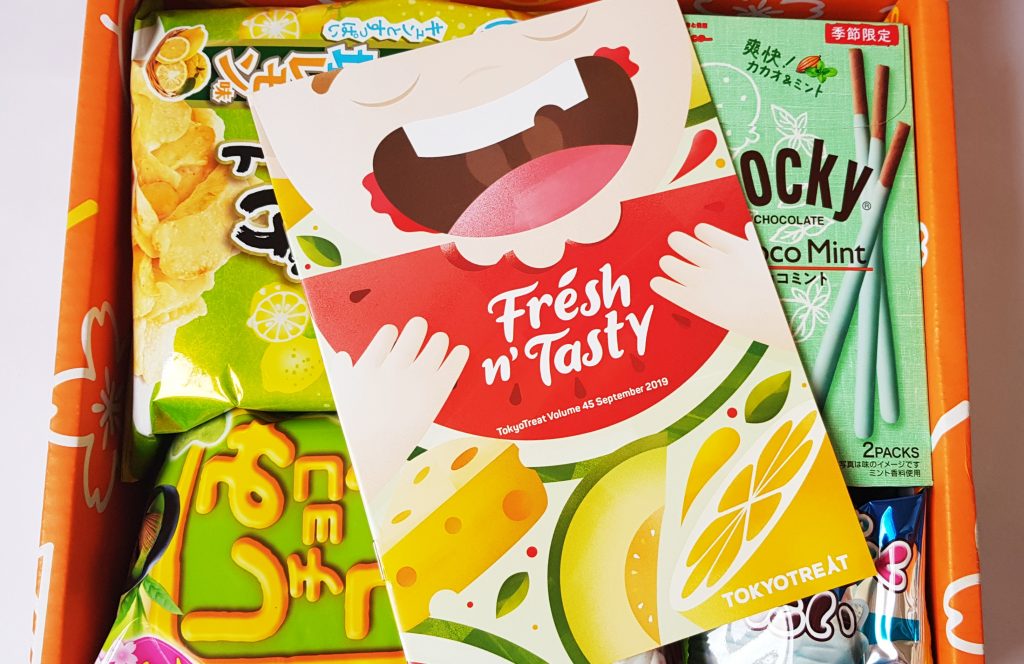 This month’s theme is Fresh n’ Tasty. Looks like there will be lots of fruity goodies inside! 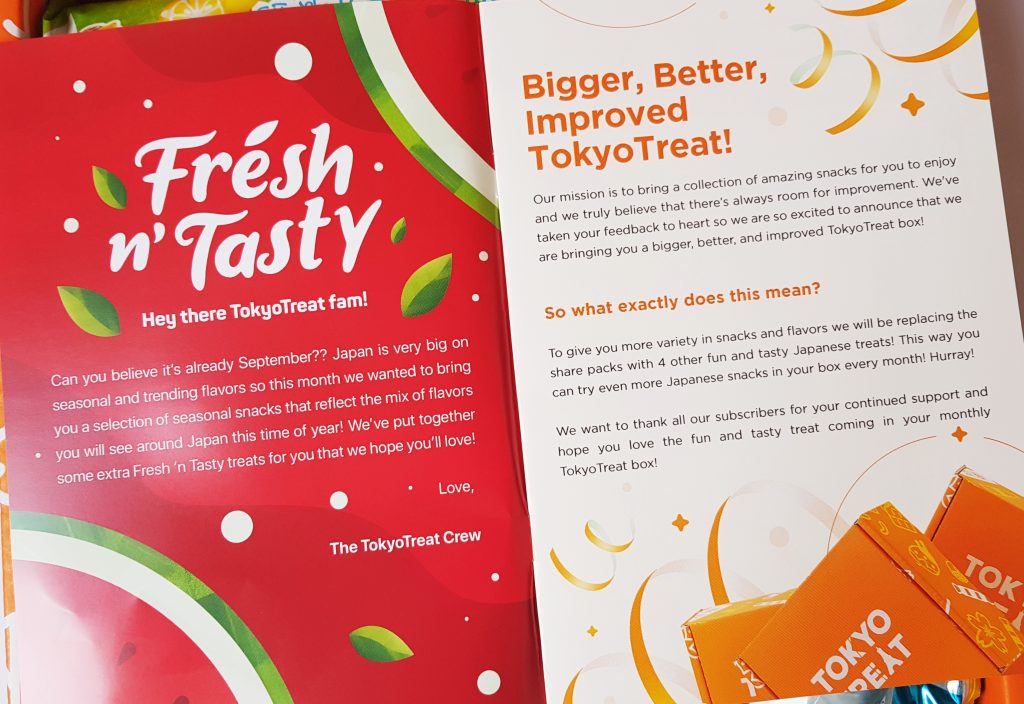 They’ve tweaked the contents a little, so the share packs have now been replaced with four different extra snacks. I really like this idea, as it means more variety! 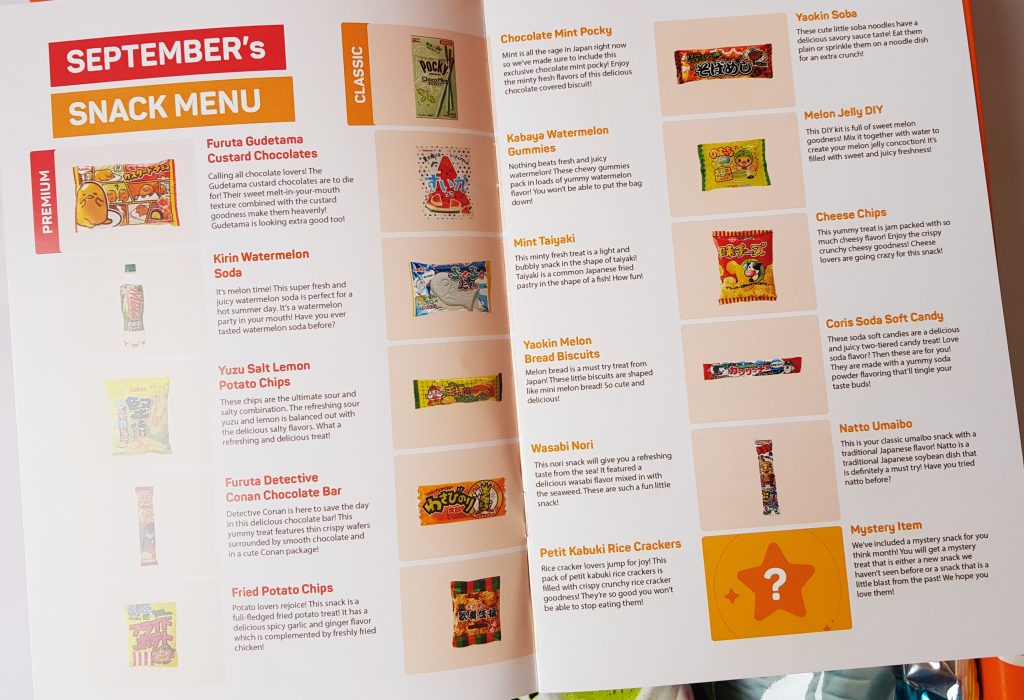 You’ve got a full menu of all the different goodies in the box, plus a mystery item! We’ll find out what that one is soon. 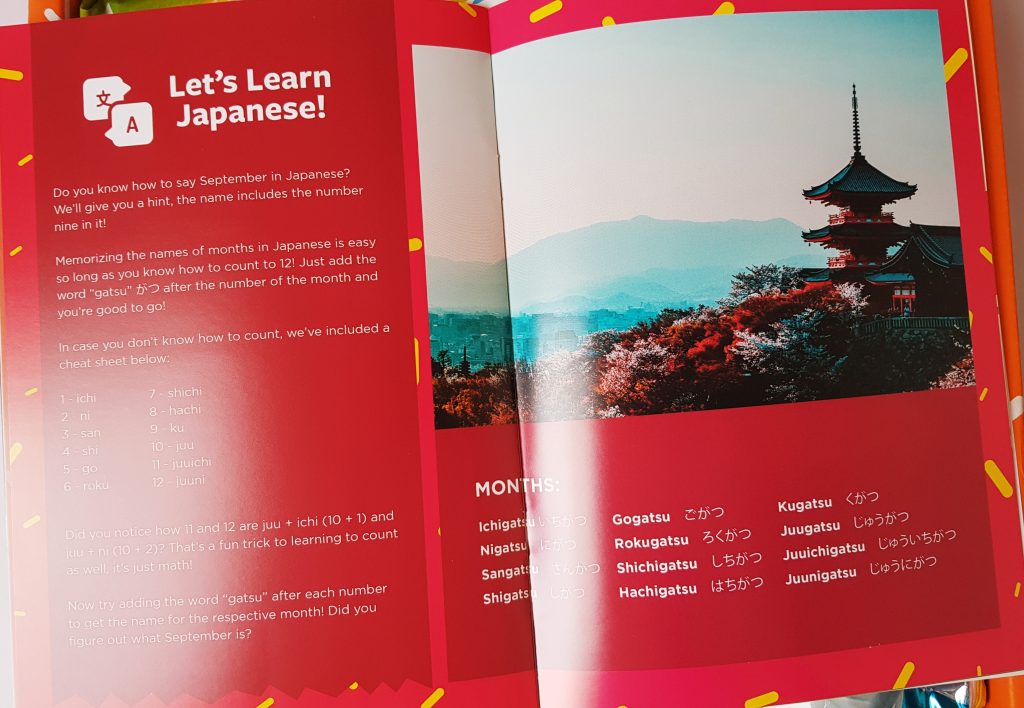 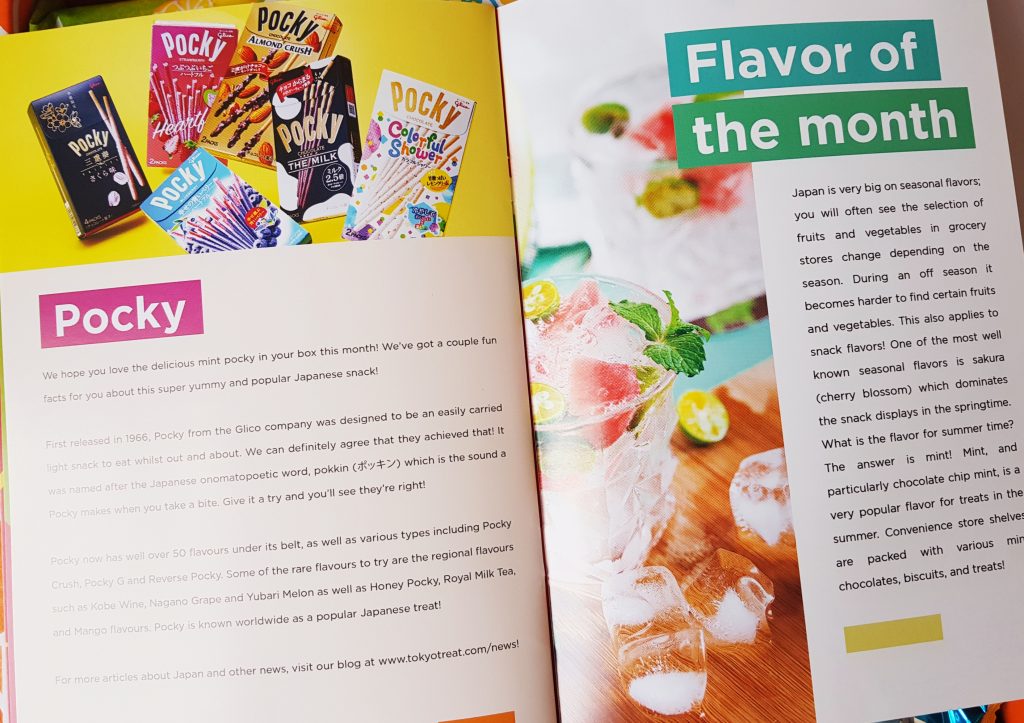 The menu booklet also contains some extra information, including some vocabulary plus background on this month’s featured snack! 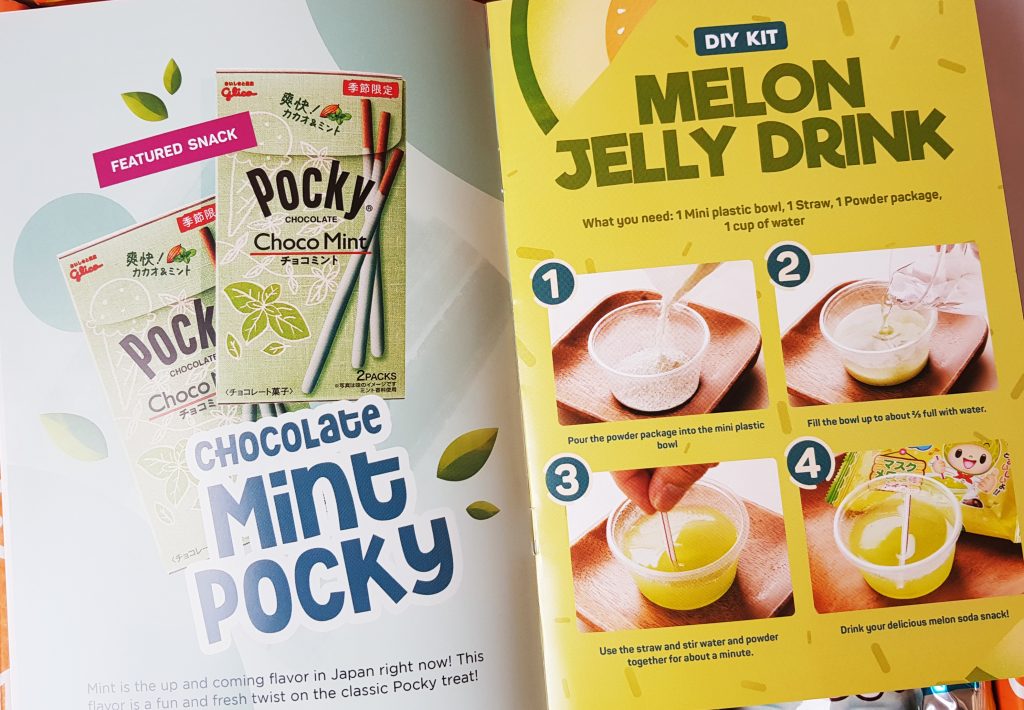 You’ll also get instructions for the DIY candy kit. While they’re often obvious from the pictures, the instructions on the packaging are in Japanese, so this is very useful just in case! 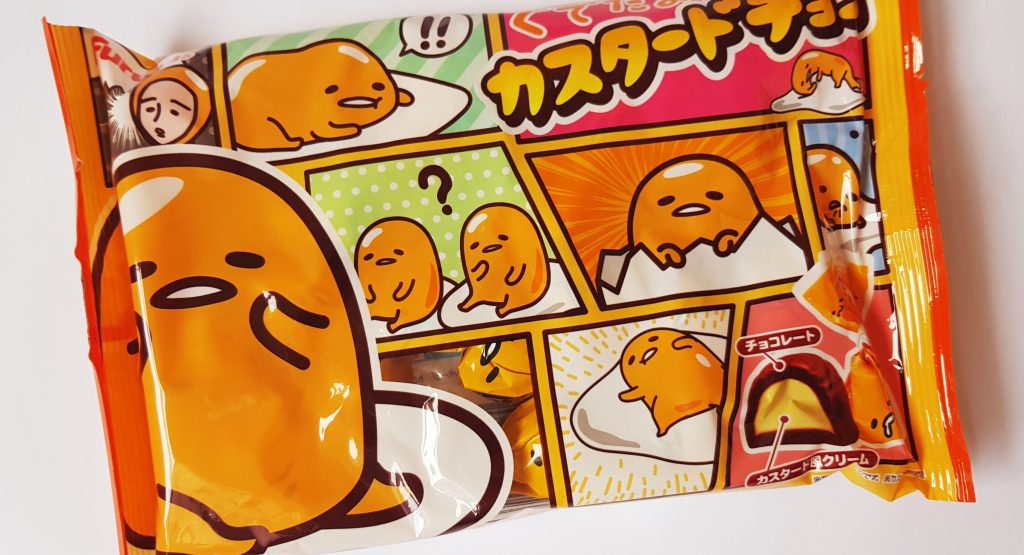 The party pack this month is a bag of Furuta Gudetama Custard Chocolates. Gudetama is my absolute favourite character, so anything to do with him is brilliant! The packaging is gorgeous, and the chocolates have a delicious creamy filling. 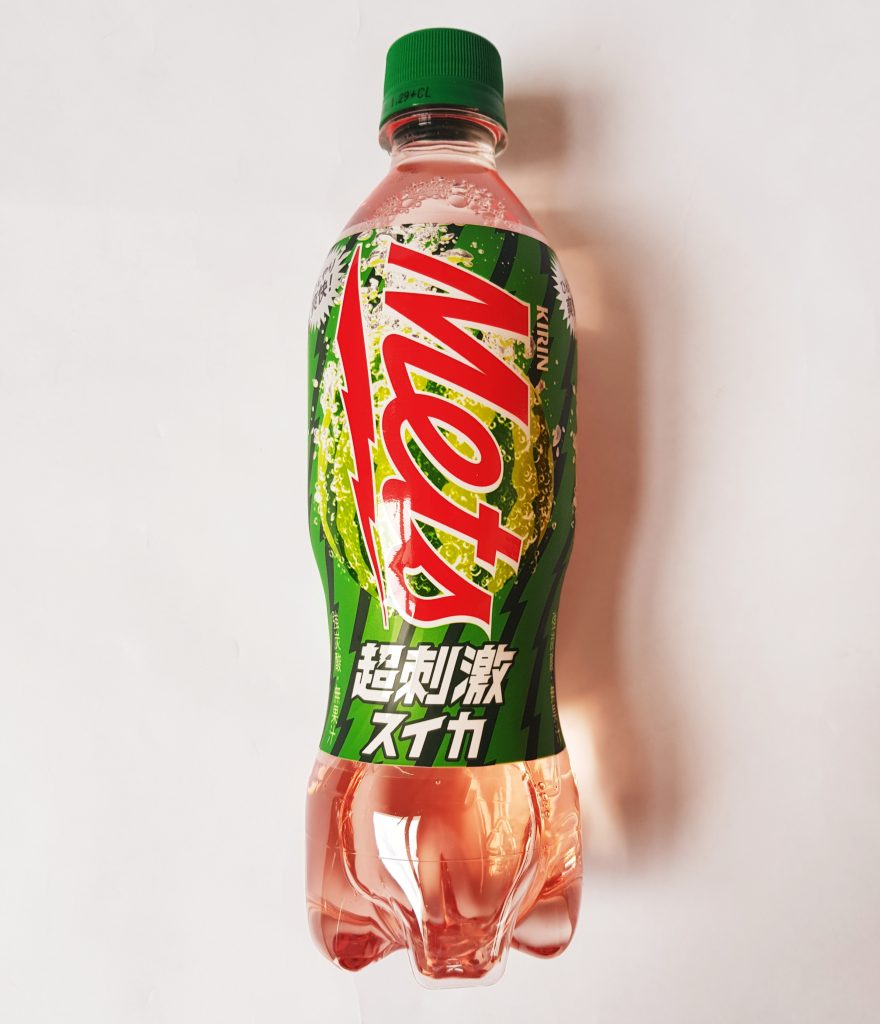 The drink this month is Kirin Watermelon Soda. If you’re a fan of watermelon, this is definitely one for you, it’s very fruity and refreshing! 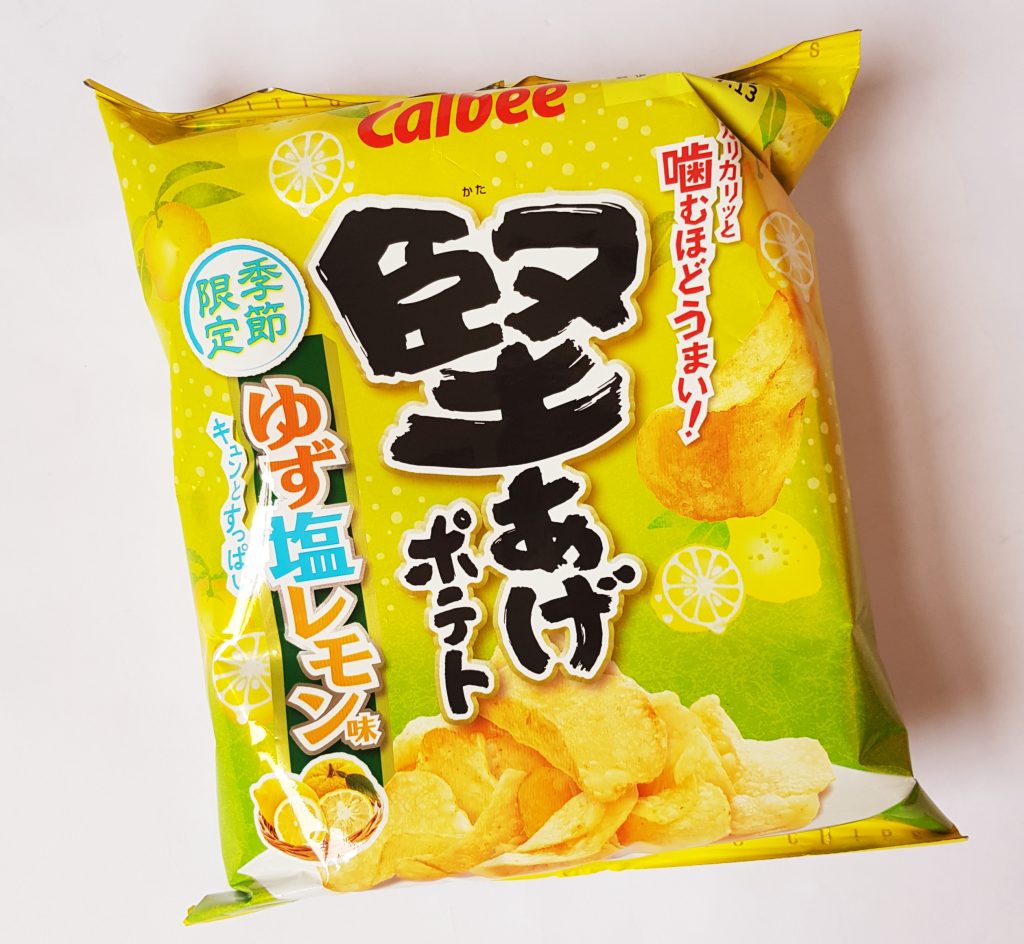 Yuzu Salt Lemon Potato Chips might sound like a strange flavour combination, but the sourness and saltiness go together remarkably well. It’s certainly not something you’re going to taste anywhere else! 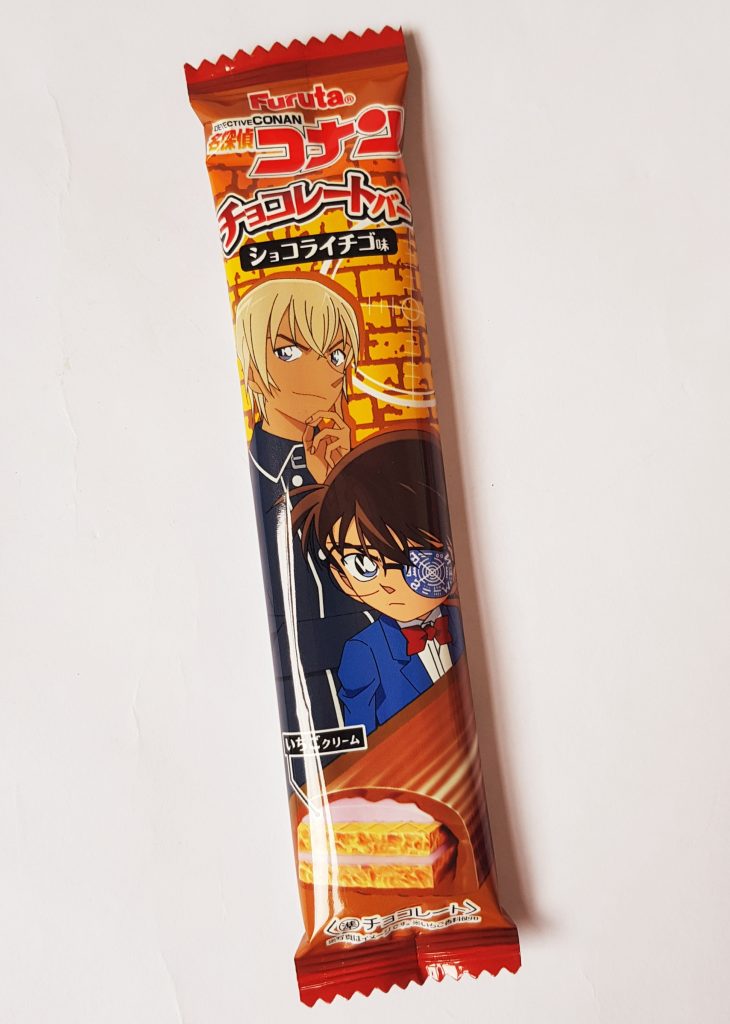 Dectective Conana is a manga seris, though it’s not one I’ve heard of, but this creamy chocolate and wafer bar features the characters and looks very yummy indeed. 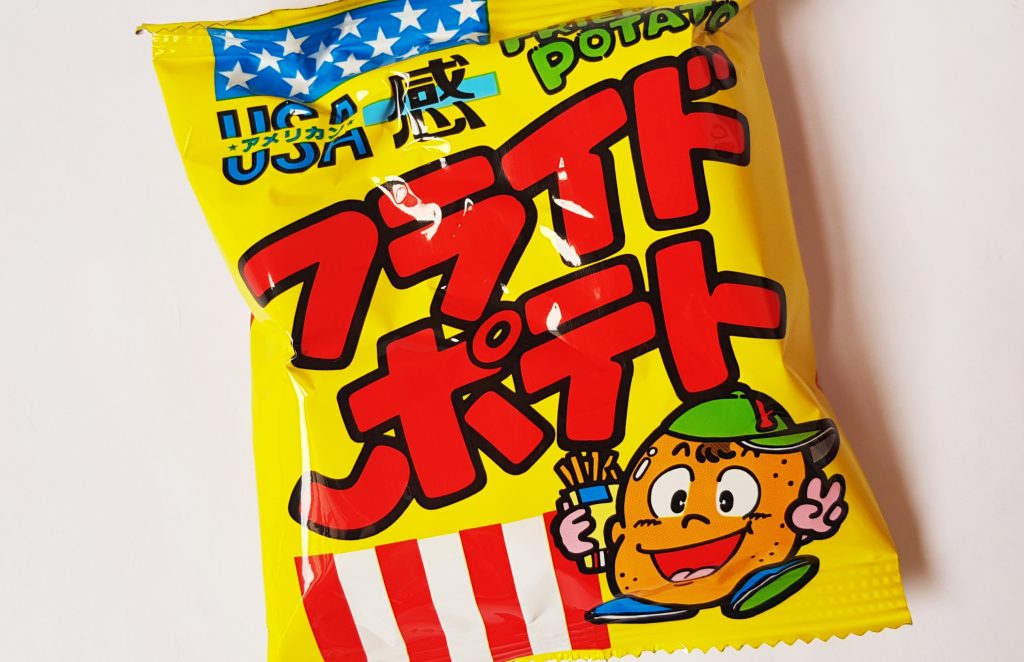 Another interesting flavour combination, these Fried Potato Chips are flavoured with garlic, ginger, and fried chicken! They’re spicy and savory and very light, though they aren’t really fried, more puffed. I think they’re called fried because they look sort of like French Fries. 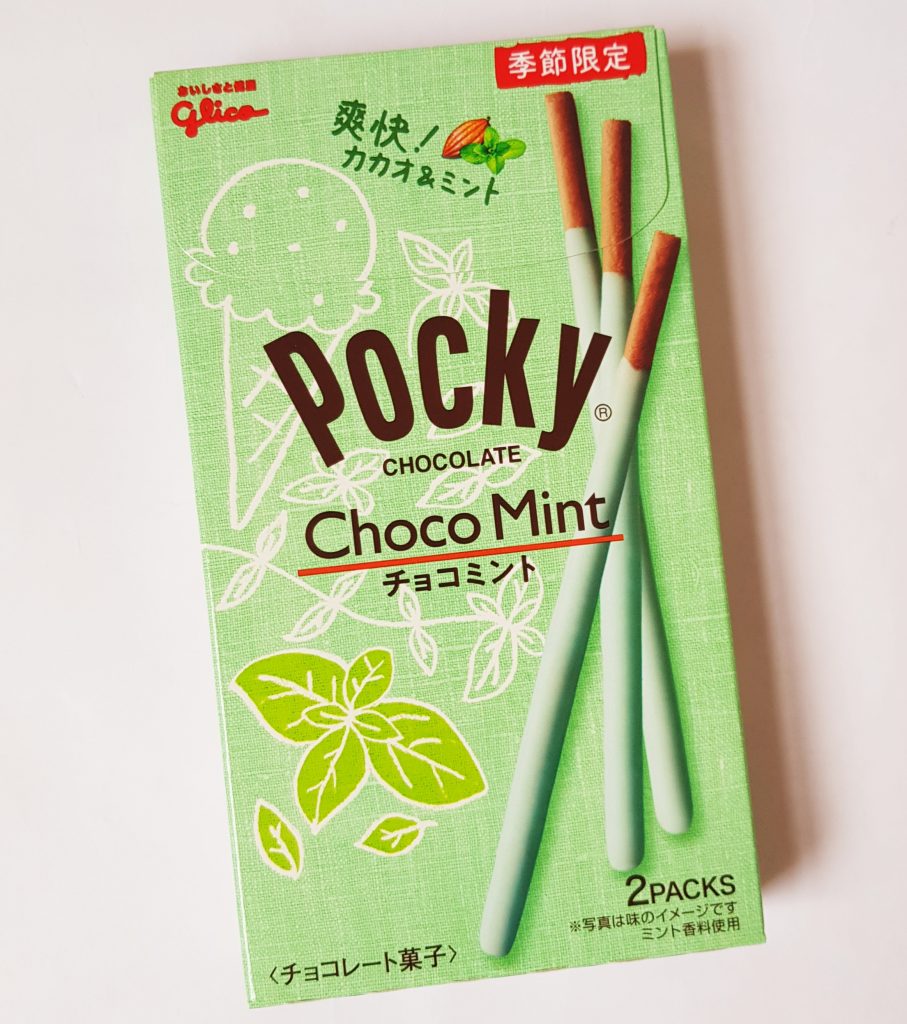 Here’s the featured snack, Pocky Choco Miny. Pocky are a classic Japanese snack of a biscuit stick covered in chocolate, and they come in lots of different varieties. This one has a chocolate stick and a creamy mint coating, and they’re a Japan-exclusive flavour. 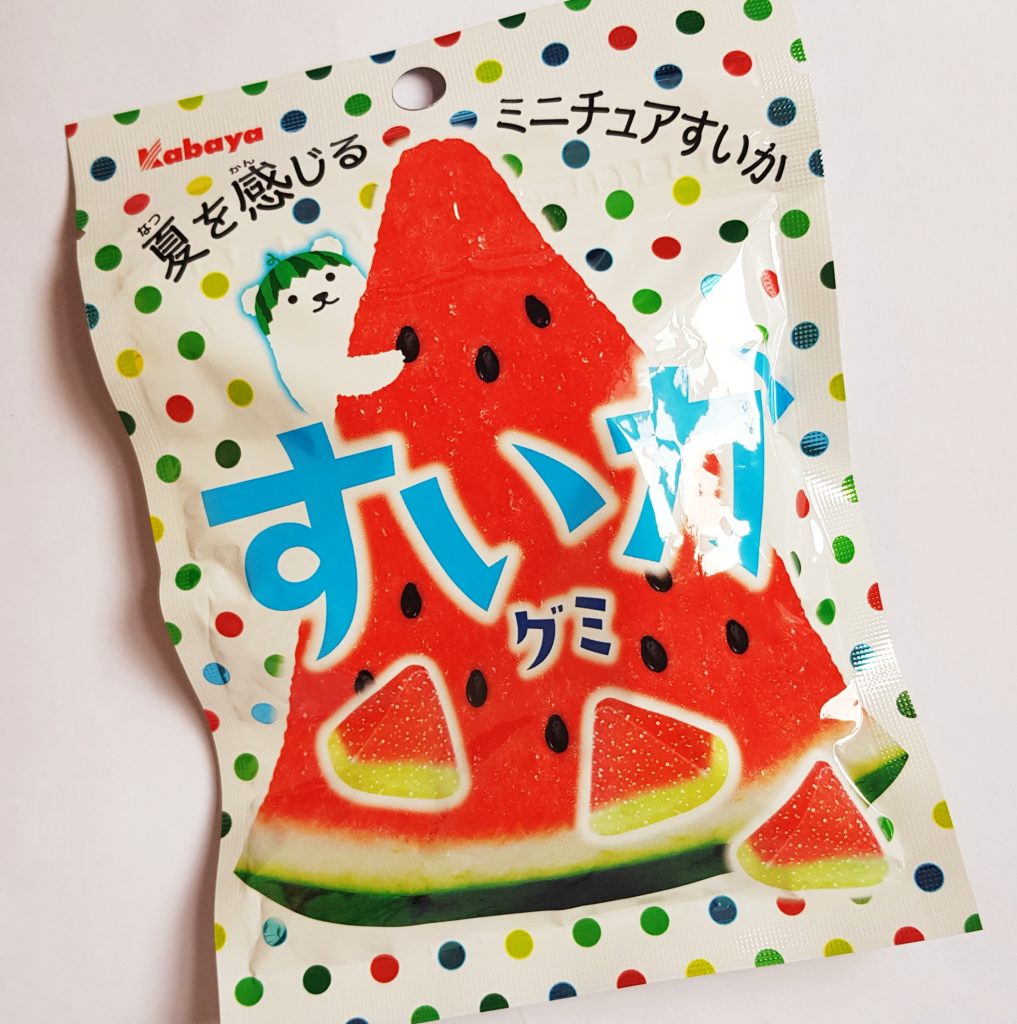 Kabaya Watermelon Gummies are exactly as you might expect, little gummies that look like a slice of watermelon. Very cute and go well with the watermelon soda.

I’ve not seen this version of a Taiyaki before! Taiyaki is a lovely light snack which is a wafer fish filled with light and bubbly chocolate. I’ve seen them in chocolate and strawberry varieties, but this is the first time I’ve tried a mint version! It has a sweet minty flavour and it’s a very pretty colour too.

Yaokin Melon Bread Biscuits are a little biscuit version of  melon bread, which is a type of  Japanese sweet bun shaped like a melon half, and also have a slight melon flavour.

Another savory item, this is Wasabi Nori Taro, a salty nori (sea vegetable) flavoured with spicy wasabi. and fish sauce. It also contains seafood (squid and fish paste) so sadly not suitable for any seafood allergies. 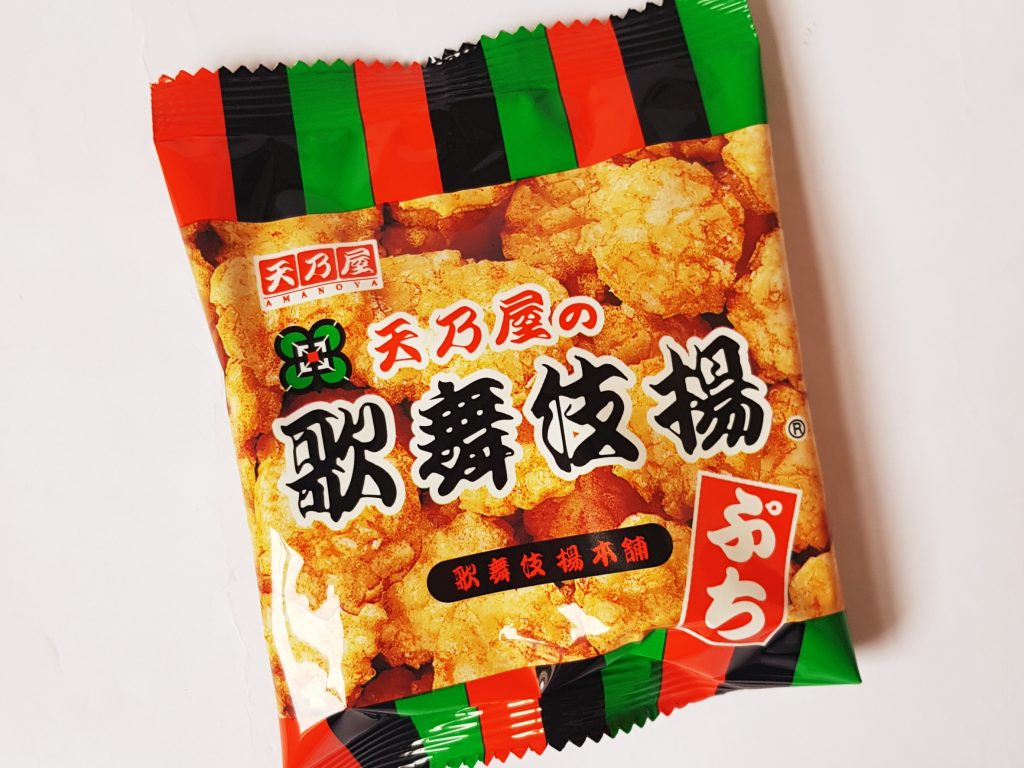 Yaokin Soba-Meshi Noodle Snack is a mixture of crispy dried noodles and rice puffs, to represent the mixture of fried rice and fried onions with noodles that is a popular street food dish in Japan. 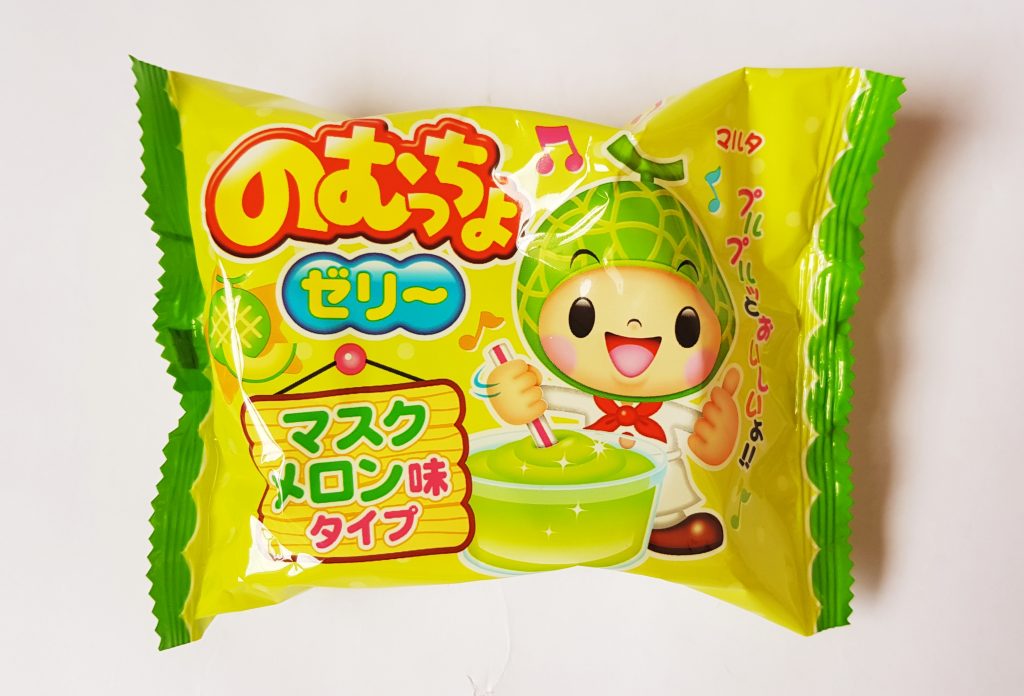 This month’s DIY Candy Kit is Melon Jelly DIY. It makes a thick melon flavoured jally than you can drink with a straw or scoop up to eat. 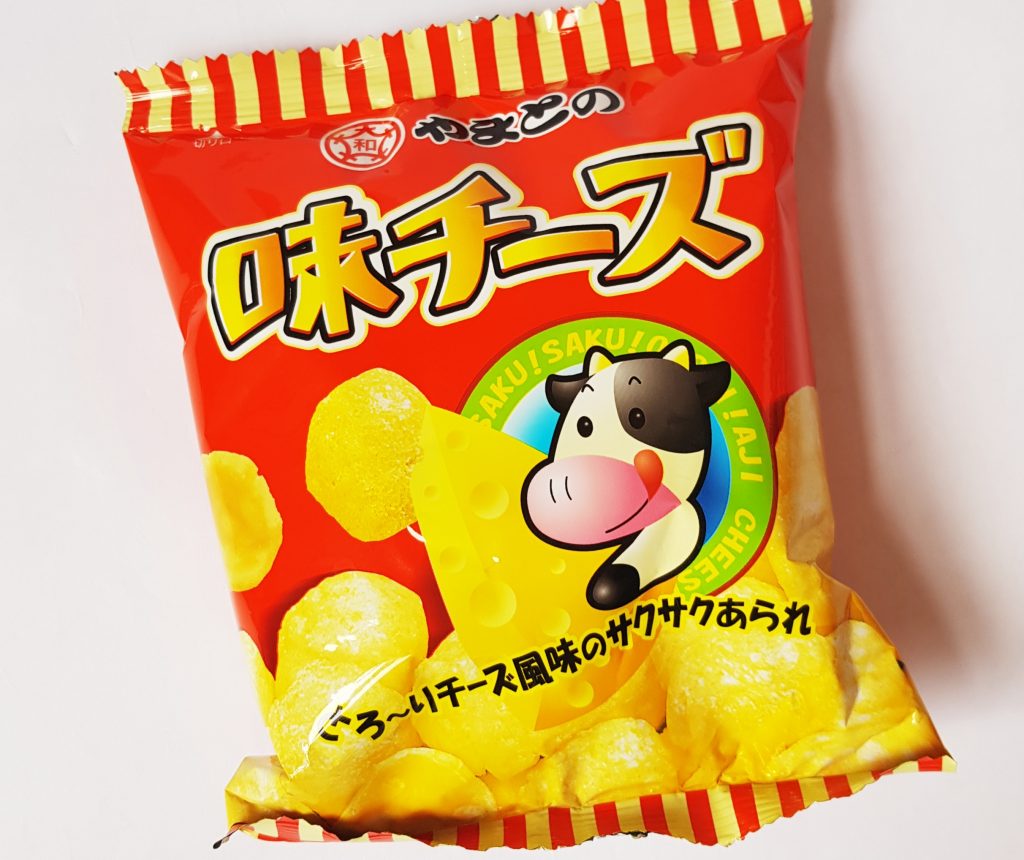 Cheese Chips are exactly what they sound like! Super cheesy crispy bites, salty and a mist for cheese fans! 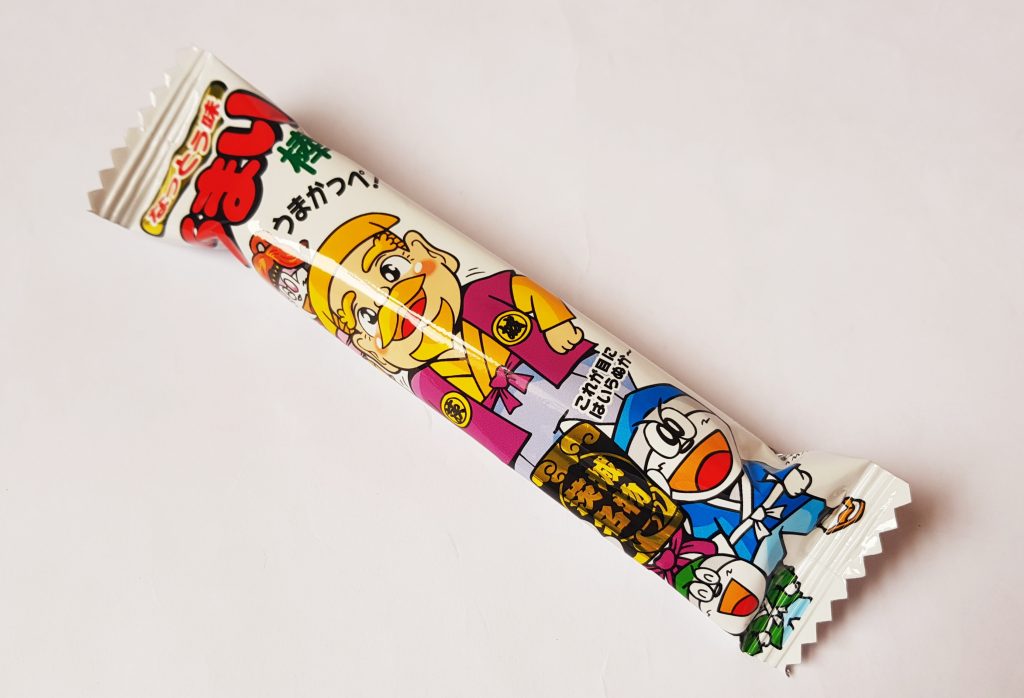 This month’s Umaibo is Natto flavoured. Natto is a fermented soybean dish, and Umaibo, which translates as ‘delicious stick’ is a crunchy crispy corn puff tube, which happens to be one of my favourite Japanese snacks! 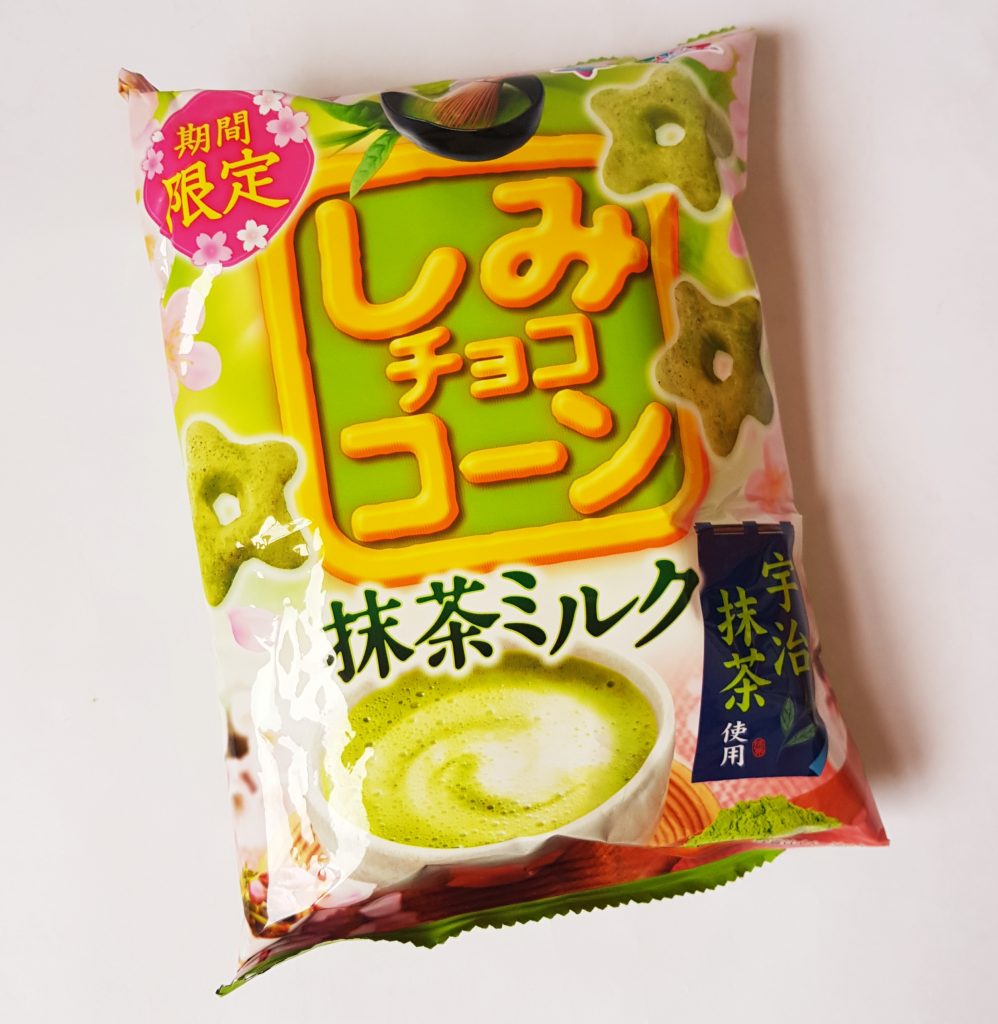 Finally the mystery snack! I managed to find the name on Google, they’re called Ginbis Matcha Chocolate Corn Puffs, and they’re corn puff stars flavoured with chocolate and matcha tea. The bitterness of the matcha and the sweetness of the chocolate go beautifully together.

This is a a great selection as always! I'm glad they've swapped out the party pack for four different items, The two mint chocolate items are things I've never seen before, and mint chocolate is a great flavour combination. Plus Pocky is always a winner, there are so many varieties! My only slight reservation is that if you have allergies you need to check ingredients quite carefully, as the descriptions don't always indicate the presence of allergens. But then if you have an allergy you're probably pretty careful anyway! Finally, the Gudetama chocolates are my absolute favourite, not only is the packaging adorable, they're delicious! I really hope to see more Gudetama items as they're always very welcome!