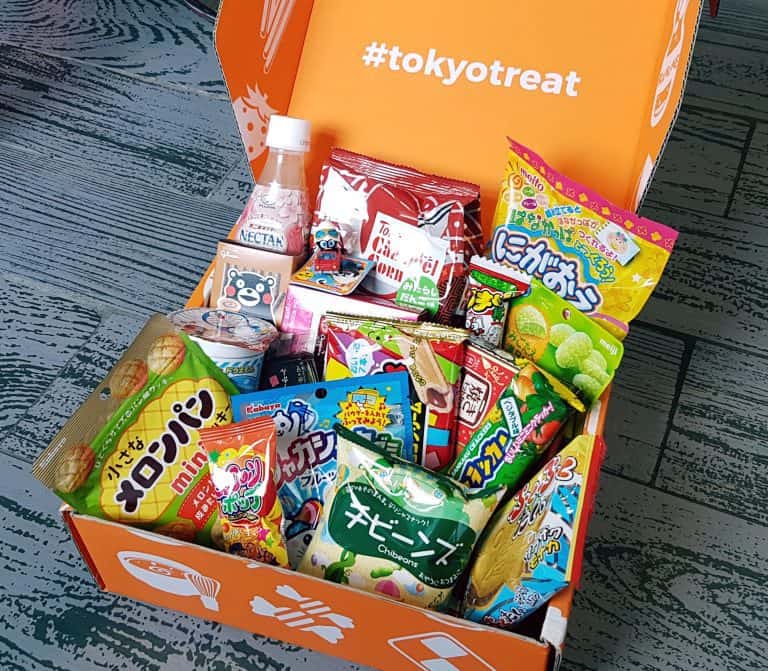 There are three monthly subscription levels:

There are also three, six, and 12 month subscriptions, which work out more cheaply per month.

I’ve been sent a Premium box, packed with lots and lots of yummy things. This month’s theme is Spring Fever! Spring is a particularly beautiful season in Japan, and TokyoTreat decided to celebrate with some fun character snacks as well as a special seasonal drink. Read on for more… 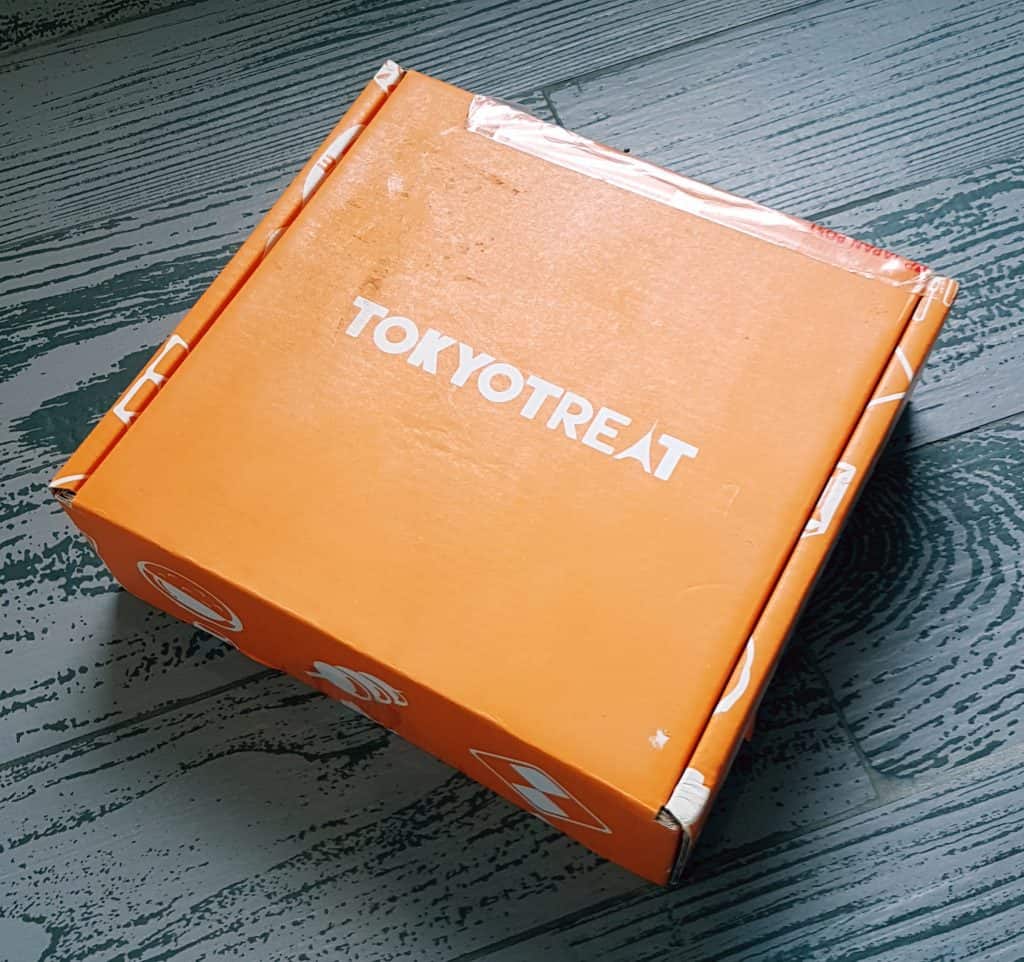 Everything is sent in a lovely sturdy box. I love the bright colour, especially as it’s easy to spot at the sorting office, where I usually have to collect it because I’m never in when the mailman calls! 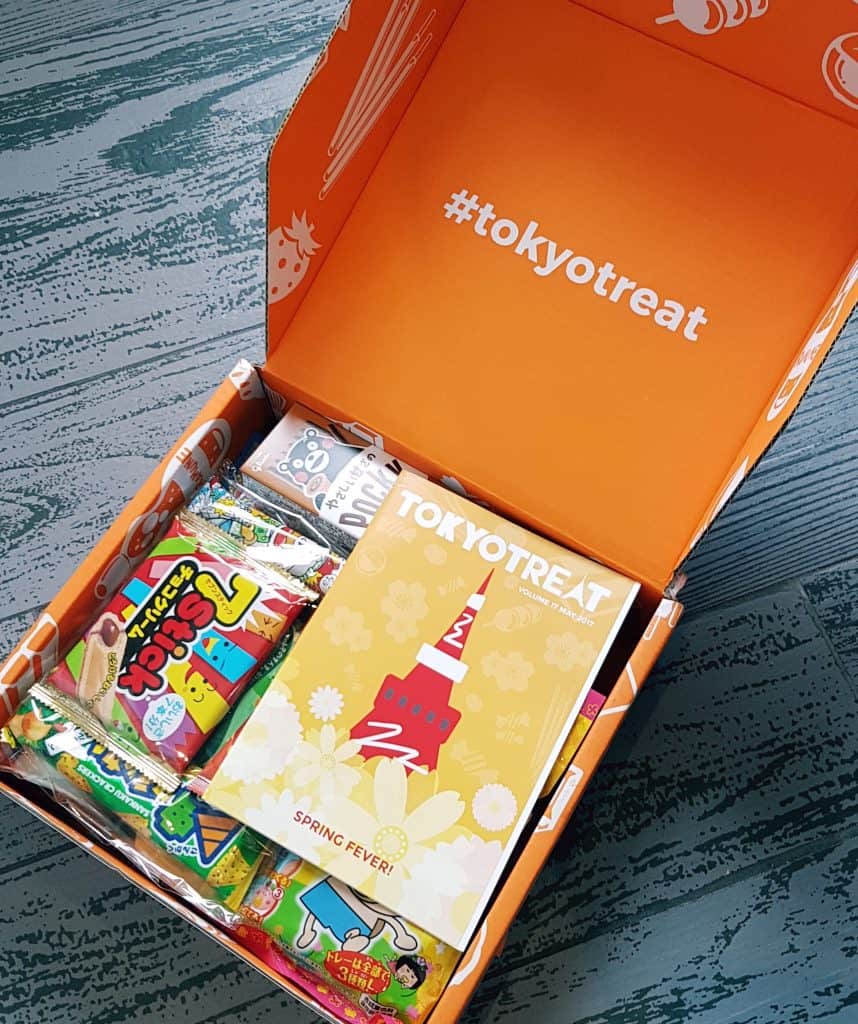 They do the most amazing packing job. I bet these guys are awesome at Tetris. On top you can see their menu magazine. 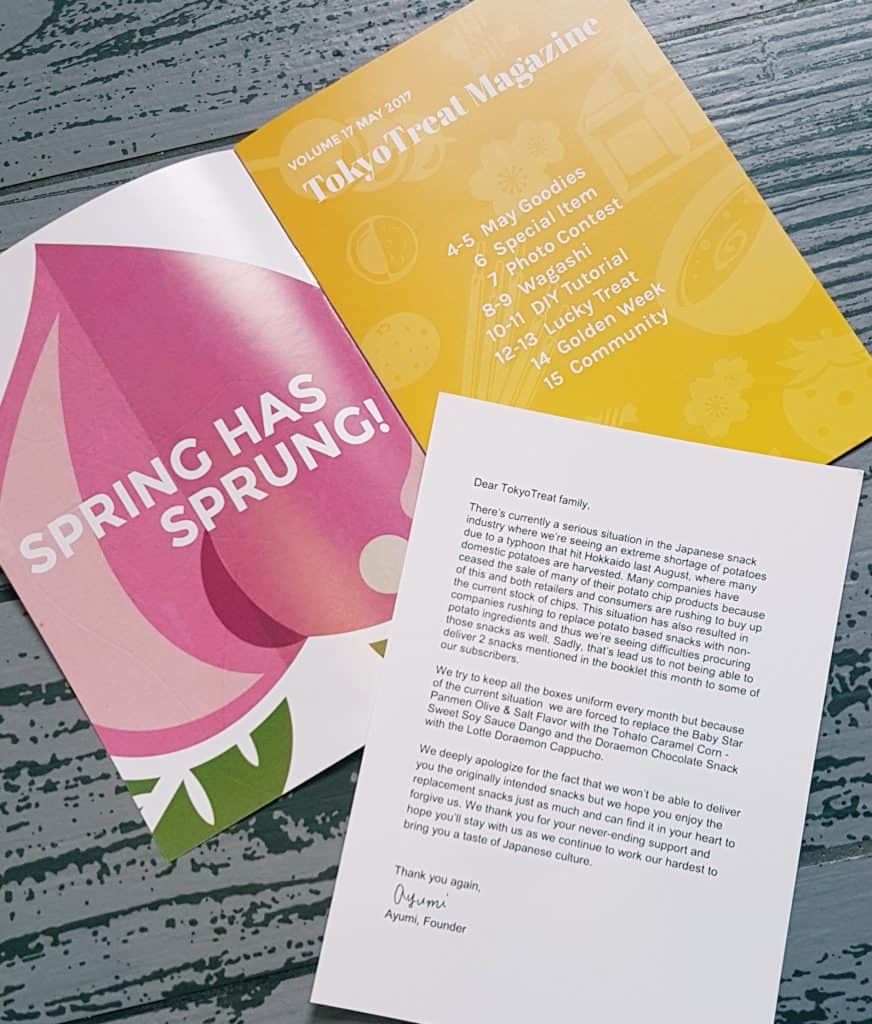 This month’s menu had an insert (above). I have to say that the substitute Tohato Caramel Corn did not bother me one tiny little bit, because I LOVE Tohato Caramel Corn. Along with Umaibo it’s my favourite Japanese snack of all time. As for the other substitution, I think I actually prefer it to the original. Anyway, more of that later. 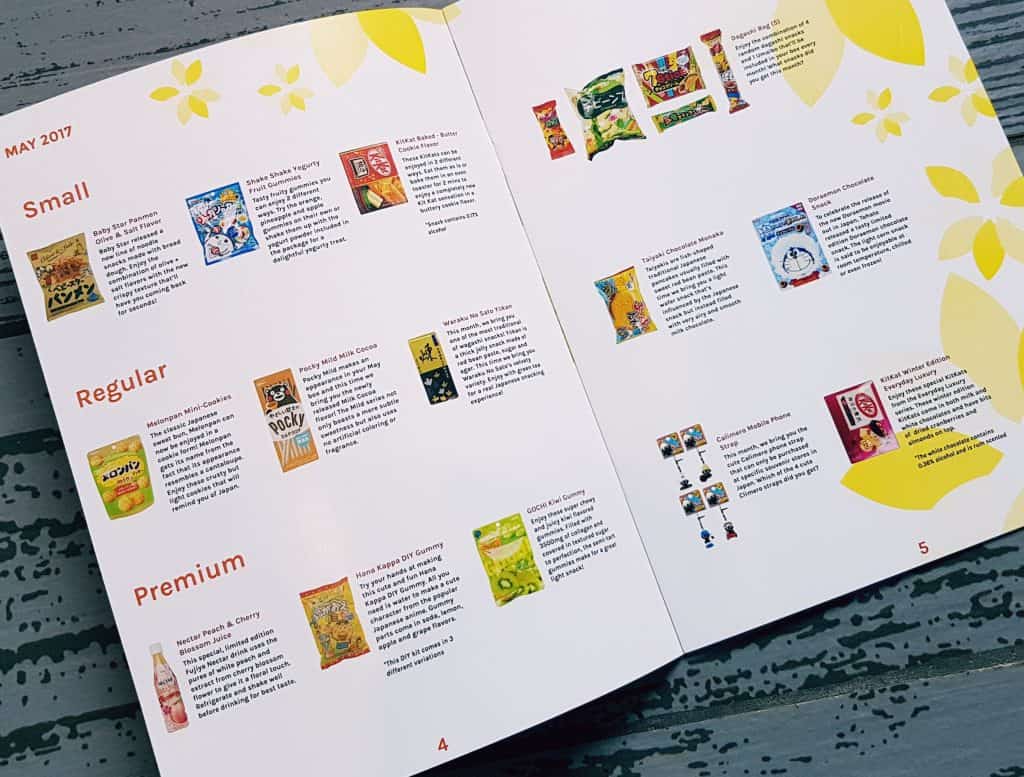 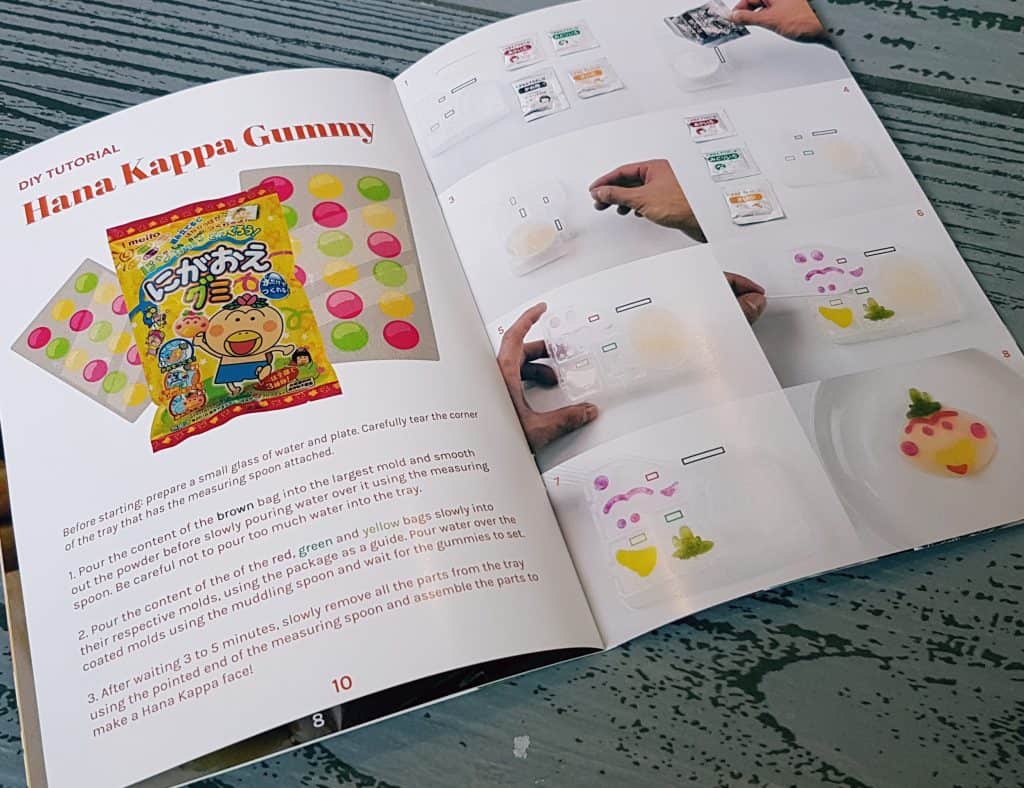 Instructions for the DIY candy. Very useful to the non-Japanese reader! 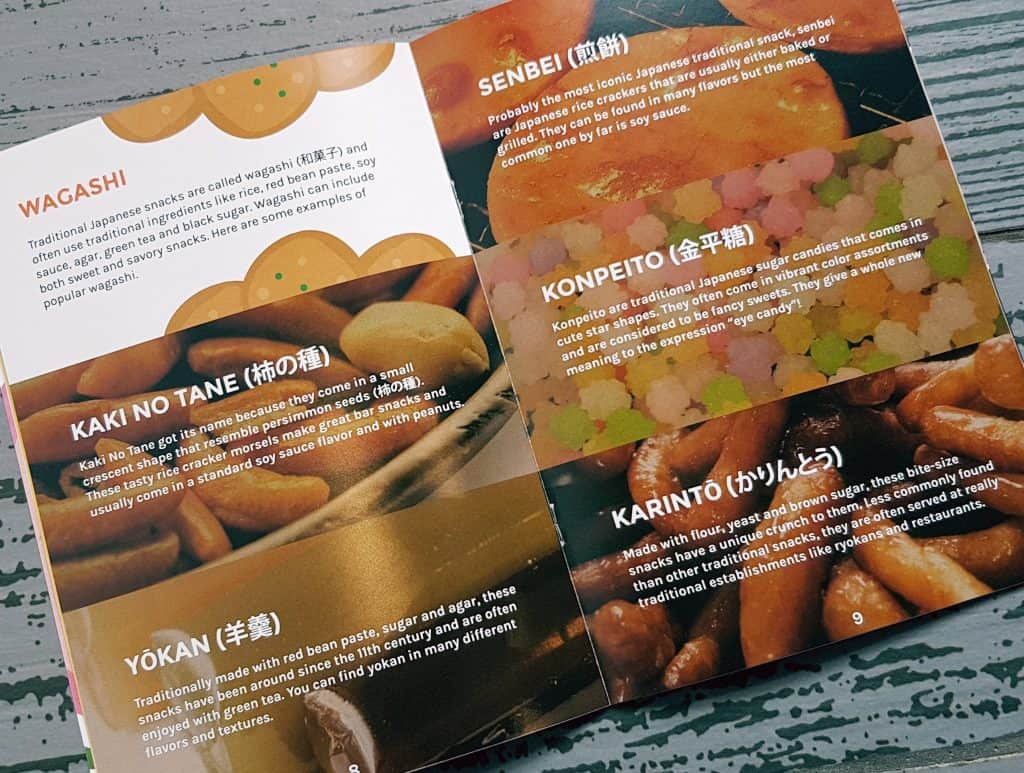 Their menu magazine always includes some interesting trivia about Japanese culture. As each box always includes a Wagashi snack it’s nice to know a little more about their origins! 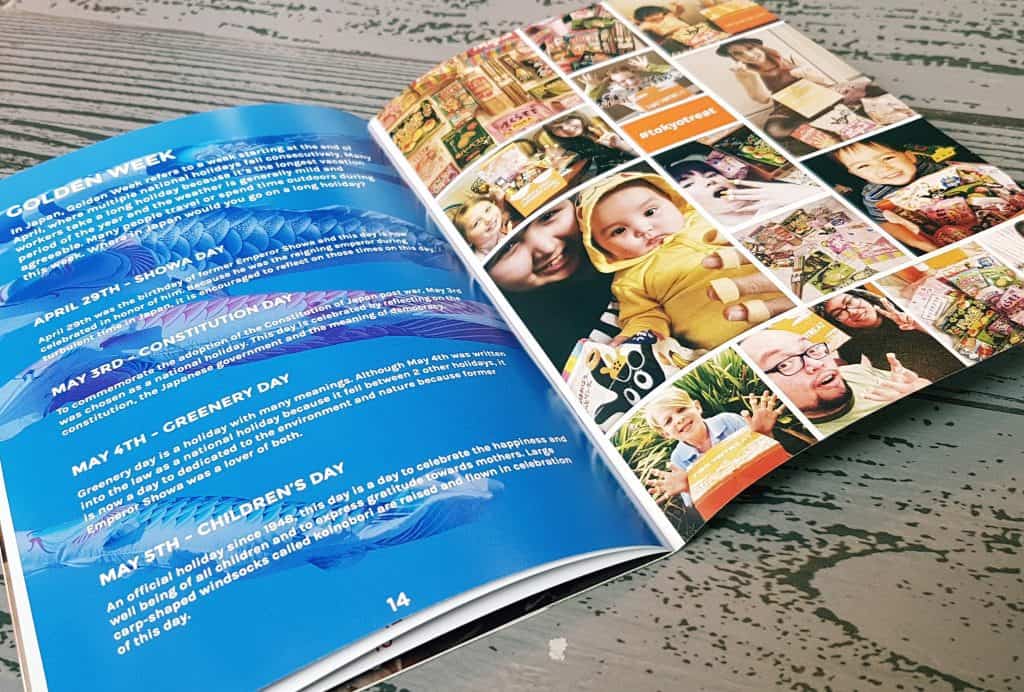 Also a little list of some Japanese Spring holidays.

First, the Dagashi bag. Dagashi are kind of like Japanese penny sweets or pocket money sweets. Each month the box includes a pack of five, always including an Umbaio. 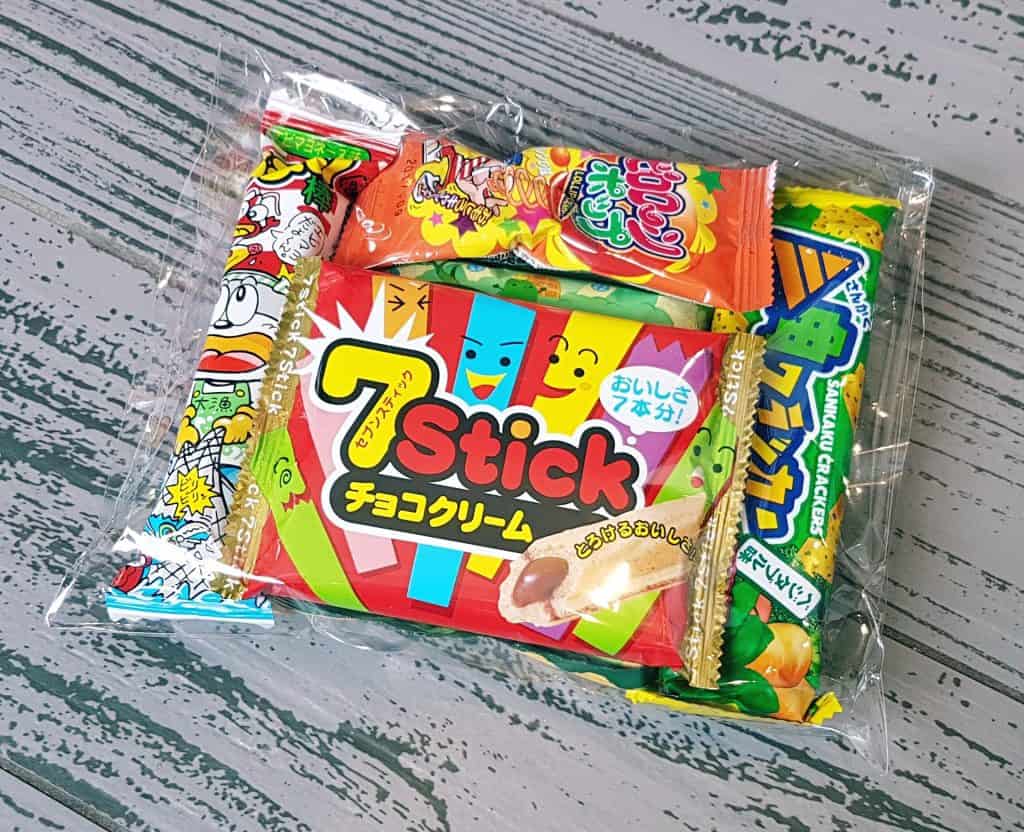 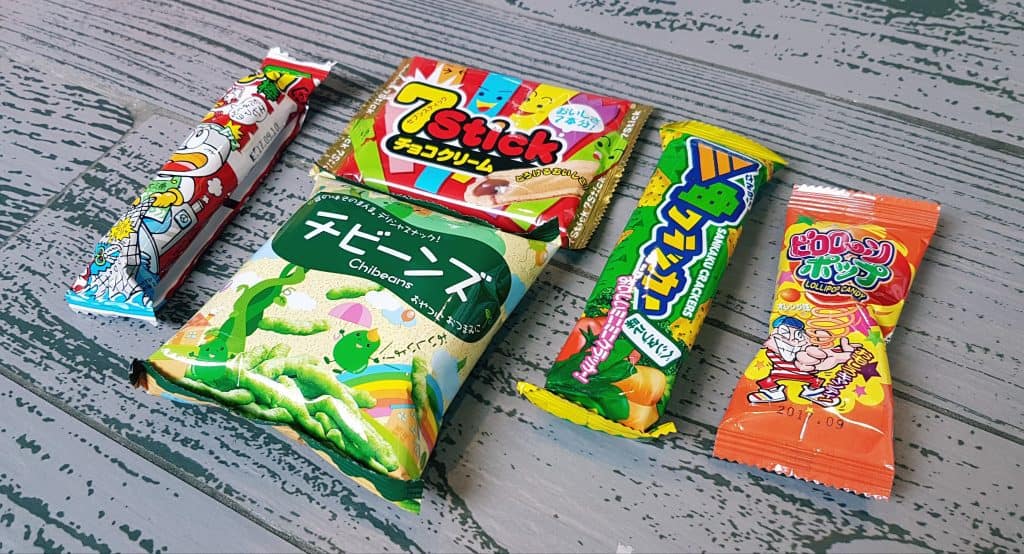 From left to right:

Umaibo. One of my favourite things ever, it’s a crunchy corn puff tube, and comes in a massive variety of flavours. I was kind of sad that this one is the ‘shrimp mayonnaise’ flavour because I’m allergic to shellfish. Unlike most UK prawn snacks this contains actual shrimp.

Chibeans. These are kind of difficult to describe. They are a salty crunchy stick snack, sort of bean-flavoured. I know that sounds rather peculiar, but they are actually very nice.

Sankaku Vegetable Crackers. Another savory snack (yay!) these are exactly what they sound like. They are good on their own or tasty with some cheese. Vegetable flavoured snacks are very popular in Japan, and these are tomato, broccoli, and carrot.

Yaokin Lollipop Candy. This is your regular lollipop, but with a twist: the stick is actually in the shape of a spring (geddit?)! 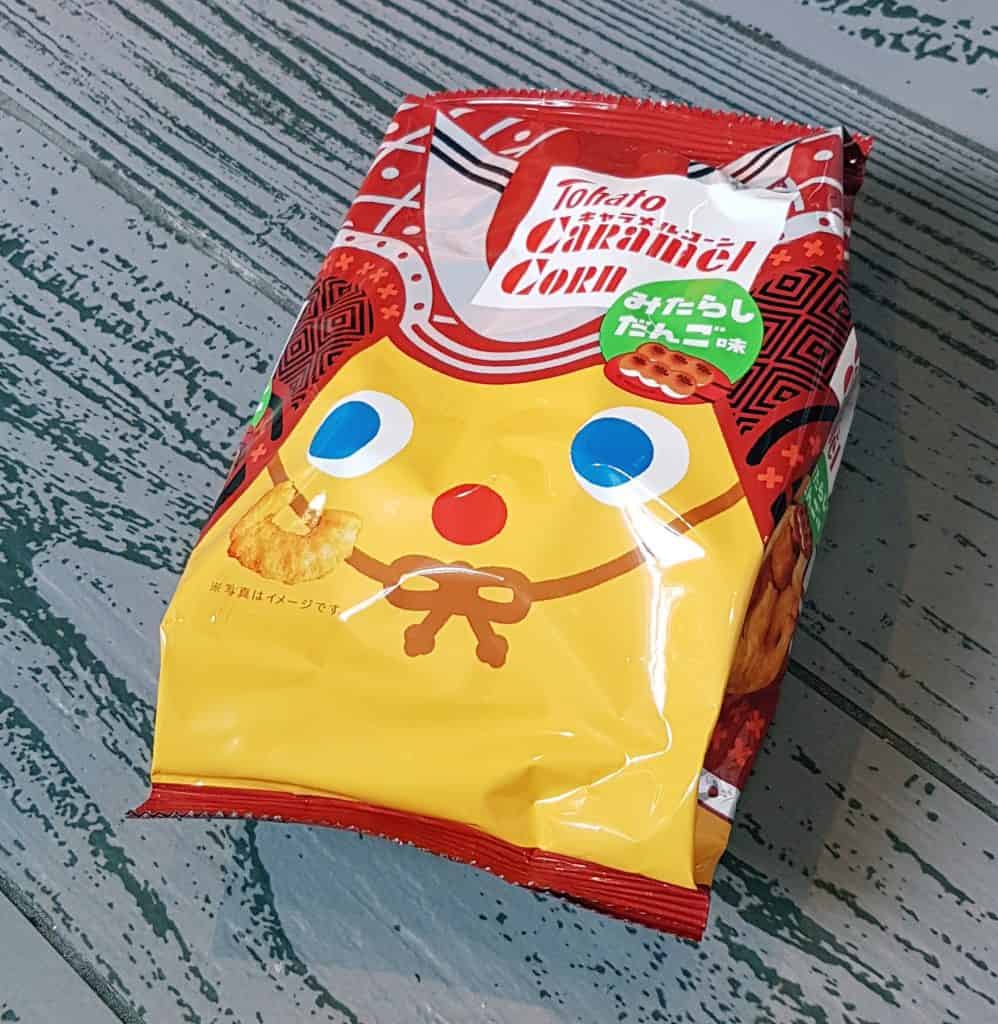 Now, this was supposed to be the Baby Star Panmen Olive & Salt Flavour, a noodle-type snack made with bread dough. But because of the supply problems mentioned in the insert (above) instead I have Sweet Soy Sauce Dango Tohato Caramel Corn. Dango is a type of sweet Japanese dumpling, and this has a wonderful sweet/salty flavour. I just love Japanese caramel corn, and this one is as delicious as the others I’ve tried. 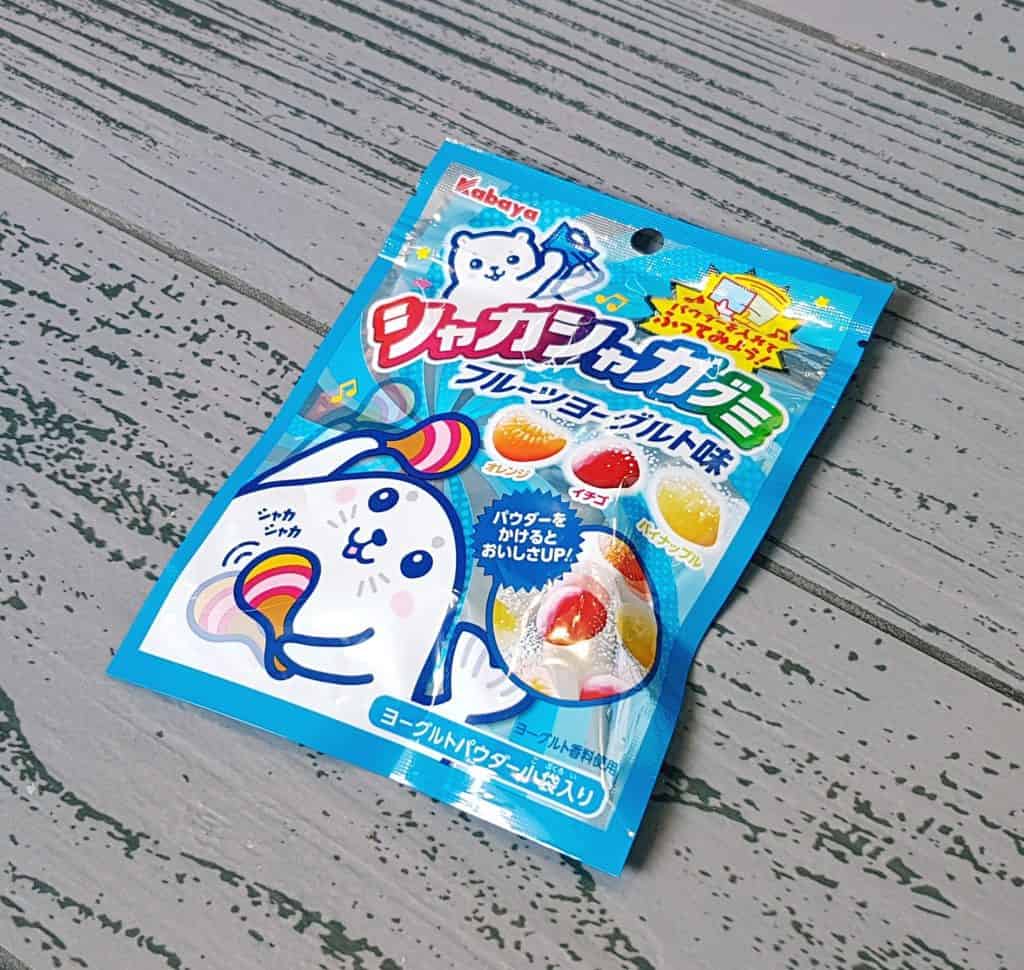 These are Shake Shake Yogurty Fruit Gummies. This is one of those snacks you can try two ways. The orange, pineapple, and apple gummies can be eaten alone, but also included is a little sachet of yogurt powder you can add and shake up. Rather like the Salt ‘n’ Shake crisps I remember from childhood, but sweet and chewy. 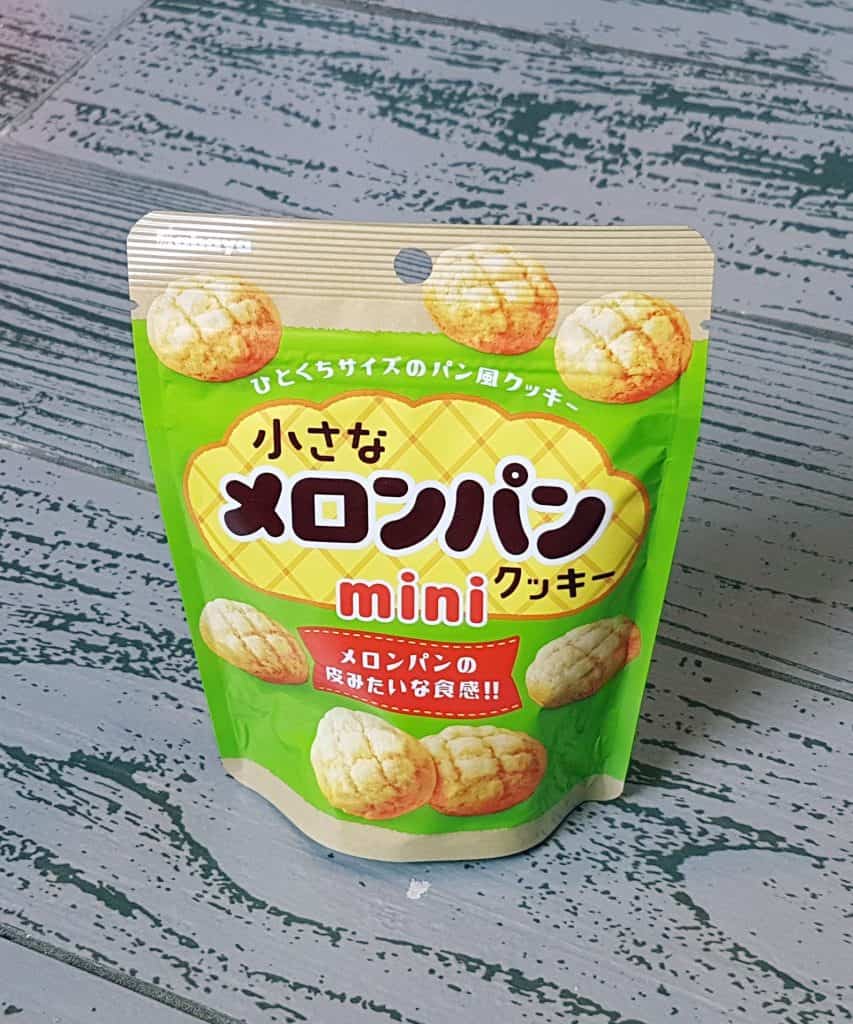 Mmmm, cookies. Melonpan Mini-Cookies. Melonpan is a type of Japanese sweet bun, and these are a tiny cookie version. The ‘melon’ part comes from the shape, not the flavour. They are simply sweet, crispy, and delicious. 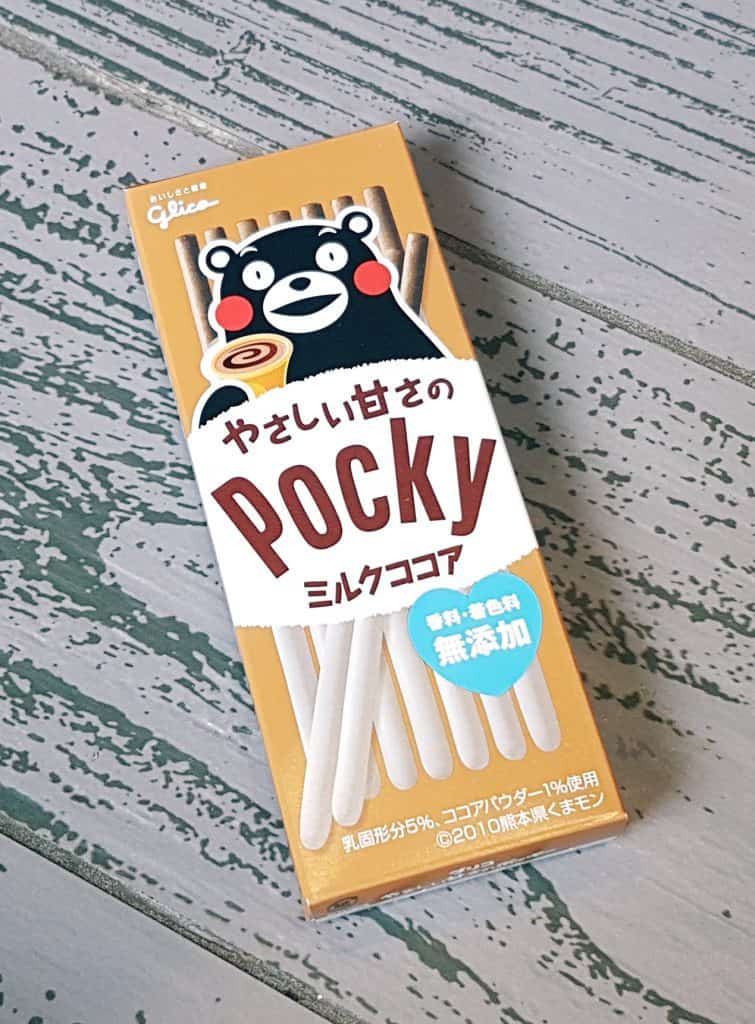 Hurrah for Pocky! This is Pocky Mild Milk Cocoa, which is a new flavour. It’s a light and subtle taste, not too sweet, and contains no artificial coloring or flavouring. It’s possible to find Pocky in the UK, but a very limited selection of flavours. The ones straight from Japan are incredibly varied. 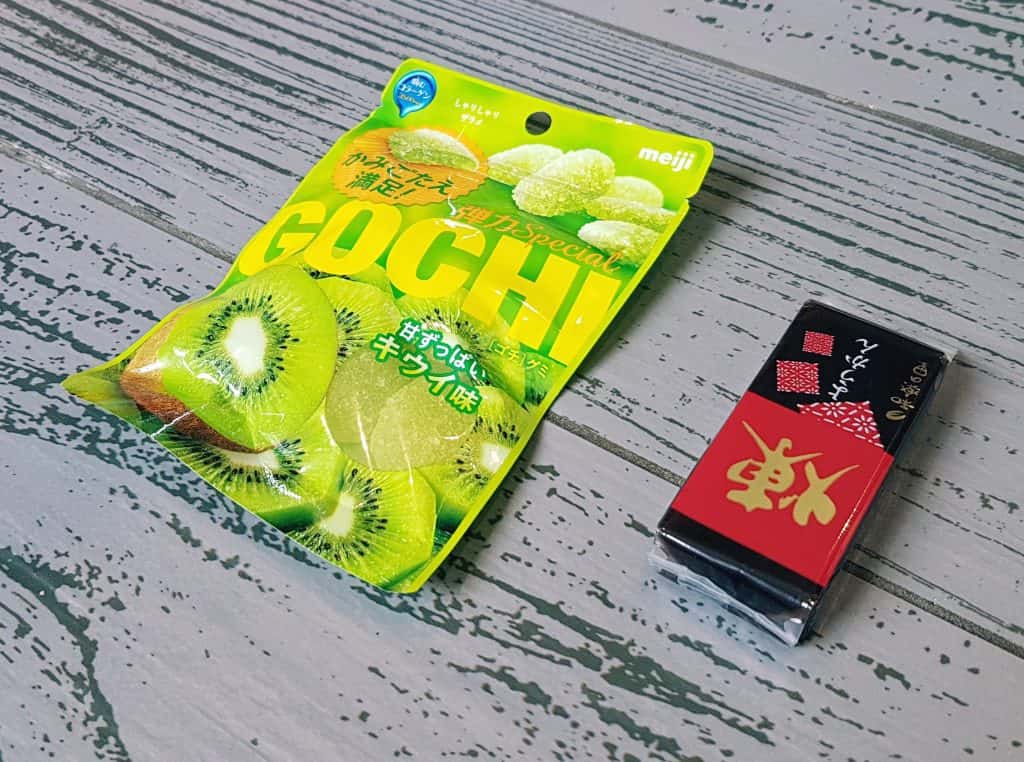 On the left we have Gochi Kiwi Gummy. These contain a good kick of collagen (which apparently is good for the skin) and also has a terrific sweet-sour kick! I love sour gummies so these are extra-good for me.

On the right is this month’s wagashi snack, Waraku No Sato Yōkan. Yōkan is a traditional Japanese dessert made from red bean paste, agar, and sugar, and is kind of a thick jellied block. It’s frequently given as a gift, and is one of Japan’s most popular candies. Personally I like this in very small amounts because it is so rich. 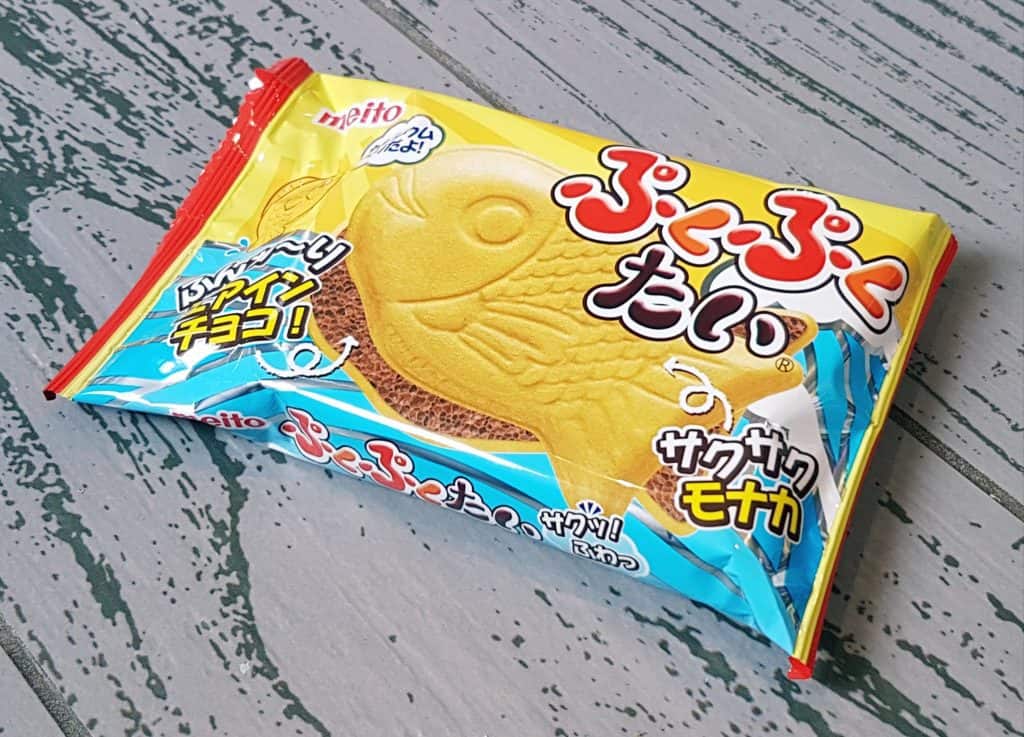 This is a fun little snack. It’s a Taiyaki Chocolate Monaka. It might seem odd to have a fish-shaped sweet snack, but actually Taiyaki is a traditional Japanese snack consisting of a fish-shaped cake with some kind of sweet filling, often sold by street vendors.

This version is a wafer shell filled with lovely bubbly chocolate, rather like an Aero. It’s crispy and light, and quite delicious. It’s also very popular with children! Especially my child. 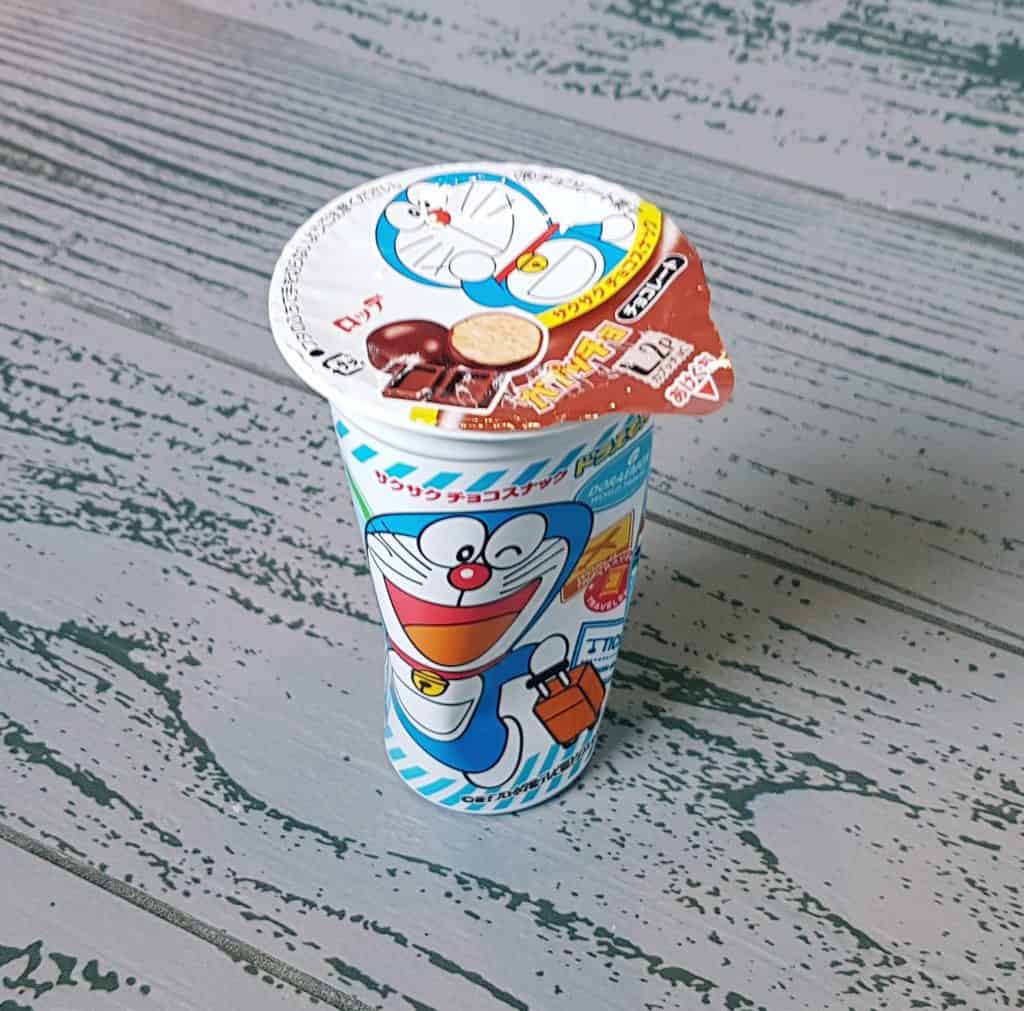 This is the alternative to the original Doraemon Chocolate Snack, the Lotte Doraemon Cappucho. Doraemon is a popular Japanese manga character, also featured in various games and animations. He is a robot cat from the future who is afraid of mice. A new Doraemon movie has just been released in Japan, and TokyoTreat has included a character item to celebrate this!

Anyway, this snack comes in a cute little pot and contains little corn puff balls coated in milk chocolate. Also included is a sticker. Bonus. The original snack was a little bag of things that look a bit like chocolate Cheerios, and while it was a limited edition snack I actually prefer this Cappucho. 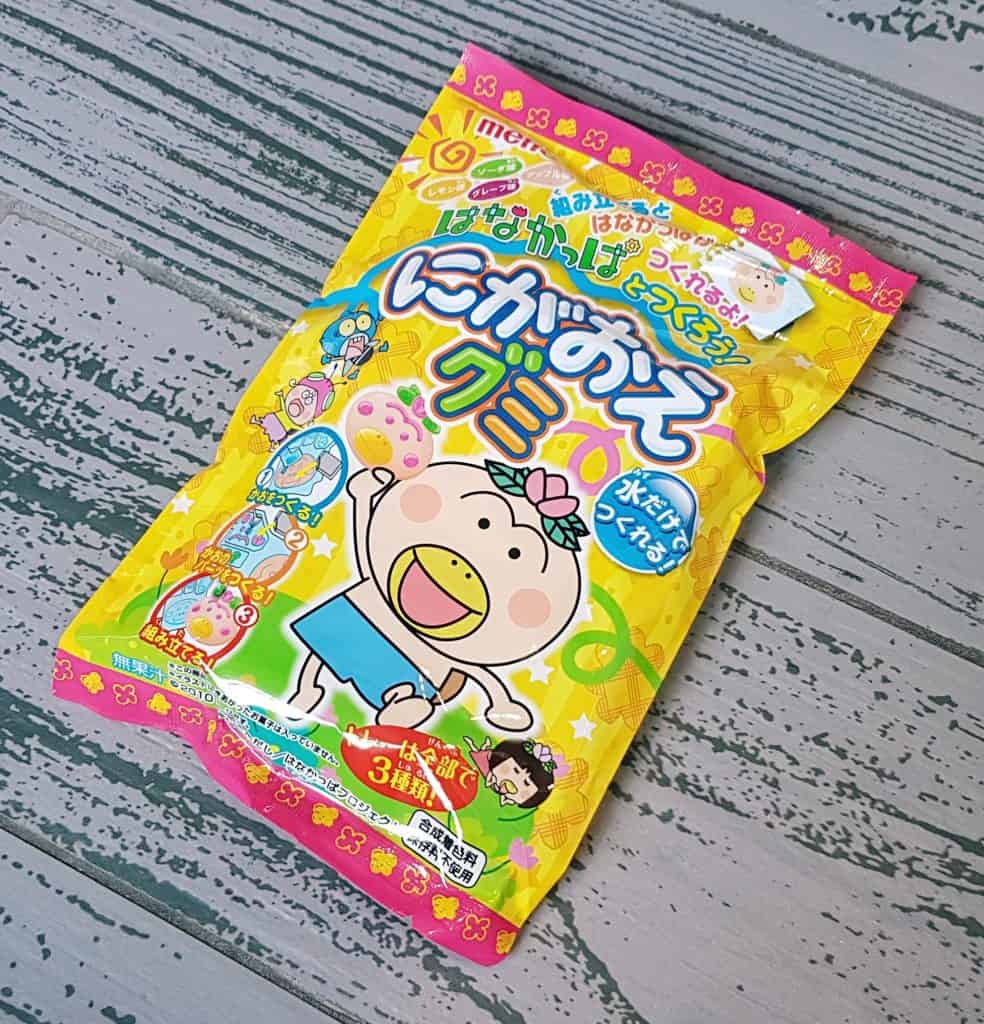 This is a HanaKappa DIY Gummy, the DIY kit included with all Premium boxes. According to the instructions (helpfully included in the magazine) you add water to powder to form the components of a gummy face, which you then complete. Japanese DIY candy kits are a really fun novelty, and they are generally very well-thought-out.

Oh, and HanaKappa is a Japanese children’s anime and manga character. A kappa is a mythical impish sprite or similar, and HanaKappa means ‘flower monster’, and he has a flower on his head. I should add that he’s entirely friendly! 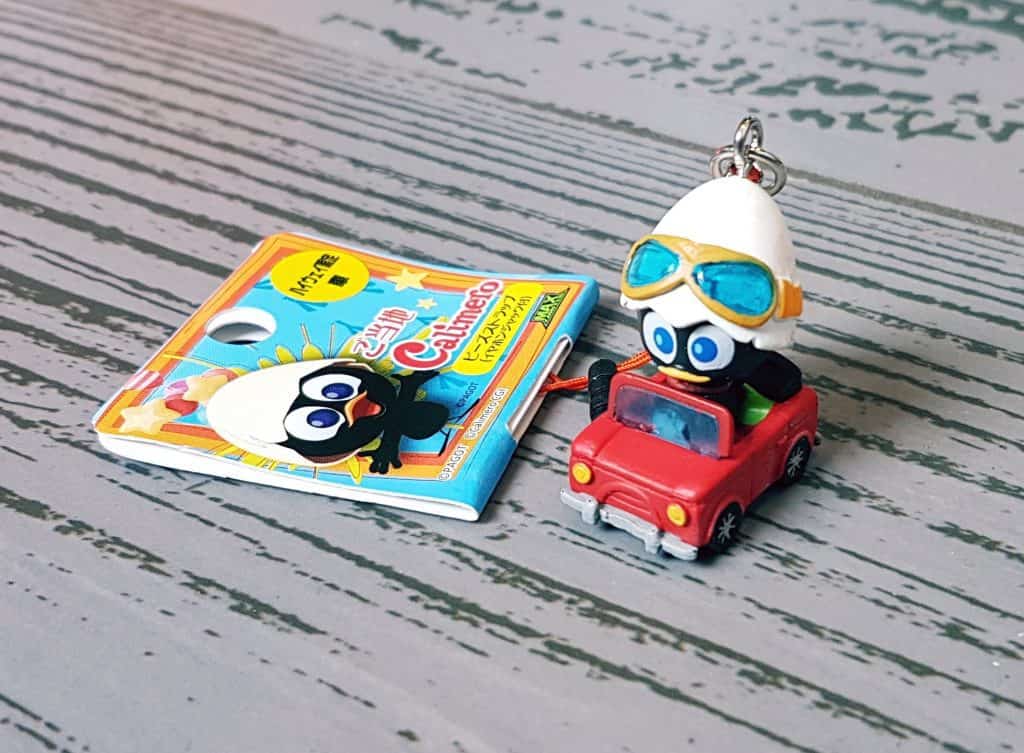 Each Premium Box comes with a little bonus non-food item. This month it is this cute little guy, a Calimero Mobile Phone Strap.

Calimero is the main character in an Italian/Japanese anime series. He is a little chick, charming but hapless, and always wears half an eggshell on his head. Calimero in his car is one of four possible options included, and though I can’t attach a charm to my phone I might put him on my car keys instead; it seems appropriate! 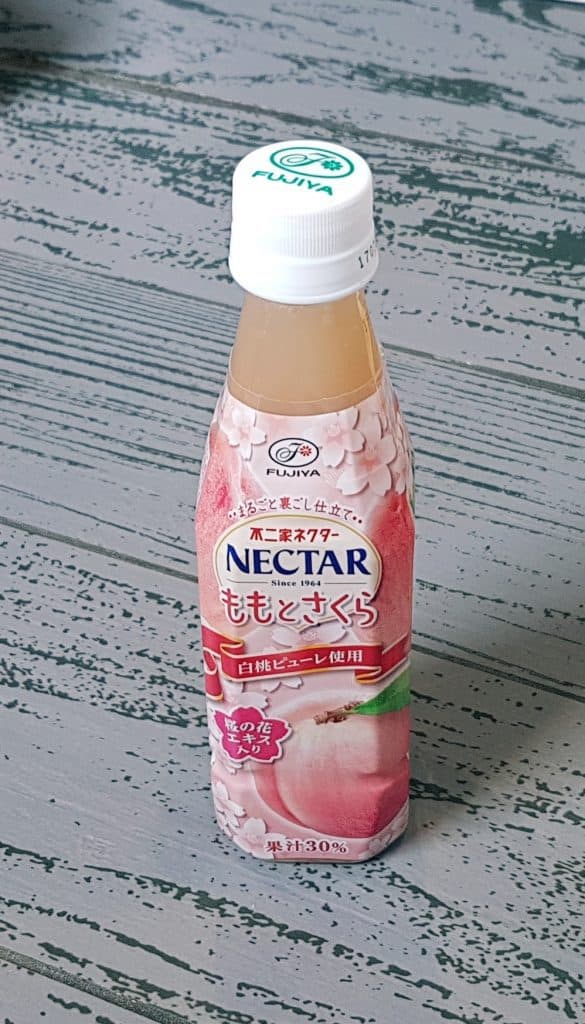 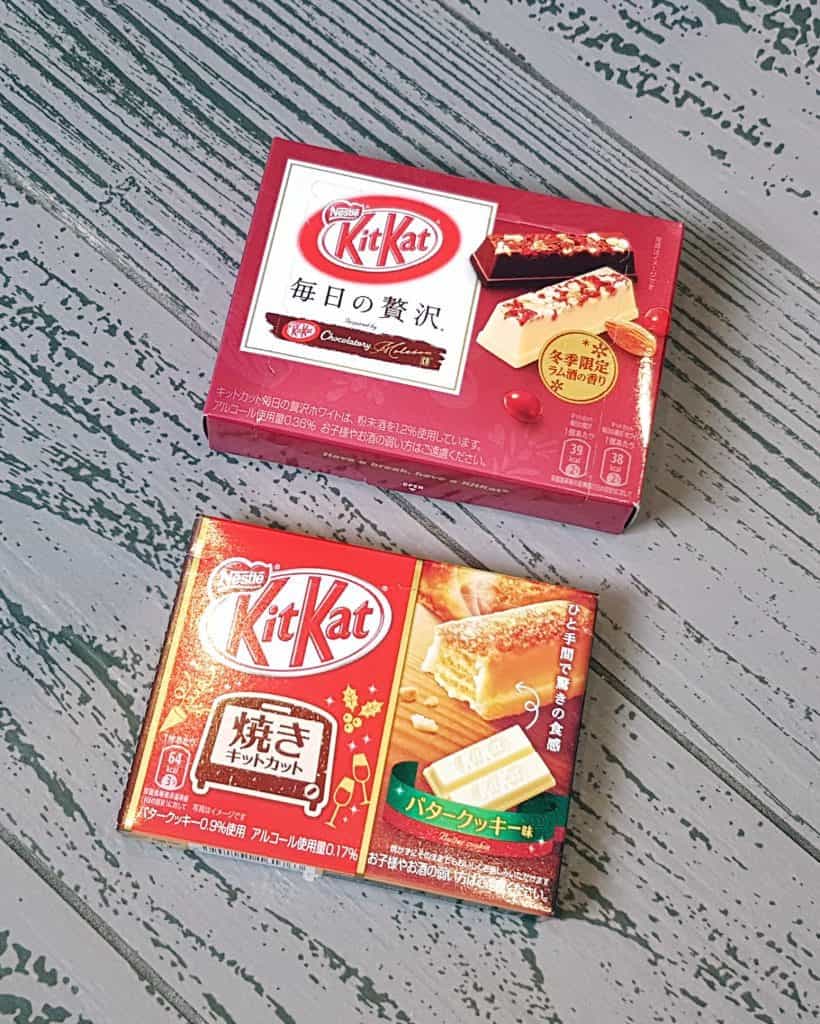 Not one but TWO KitKat varieties! Now, you’re probably familiar with the regular Western KitKats, the chocolate-covered wafer fingers. The most common is milk chocolate, though occasionally a different type (remember the mint version?) is briefly produced.

Japan takes KitKats to a whole new level. They have every flavour you can imagine and a whole bunch more. You can even get sake KitKat. Google ‘Japanese KitKat’ and prepare to drool.

The KitKat Baked is covered in white chocolate with an amazing butter cookie taste, and can be eaten as a regular KitKat. OR (get this) you can put it under the grill where the little sugar crystals in the topping caramelize and and produce the most amazing taste.

The KitKat Winter Edition box contains packages of both white and milk chocolate-covered sticks, topped with bits of almonds and dried cranberries. There’s nothing everyday about this KitKat.

Simply amazing. You’ll never look at a KitKat the same way. The only problem is that they’re only available in Japan! And of course to subscribers of TokyoTreat.

So there is everything. What a splendid selection.

I love that they’ve included two different KitKats because they really show off the uniqueness of Japanese candy flavours. The Dagashi bag is very good this month, with three savory snacks (even though I couldn’t eat the Umaibo). Pocky is always welcome, and again demonstrates the huge variety you can’t get anywhere else.

Because so many of these items are exclusive and limited the value is terrific. You could probably poke around various import sites and find some of these things, but when you factor in shipping plus general hassle factor it adds up to an awful lot.

This box always includes a great variation of flavours and textures, and while one more of my items should have been savory (and I love savory stuff) its replacement was the caramel corn and I can’t get enough of that stuff!

I like the little phone charm as the extra item; not only is he cute but I’ve been introduced to yet another Japanese character. The packaging of Japanese snacks is so wonderful too, such amazing bright colours and fun illustrations, and it adds an extra dimension to the enjoyment of all the deliciousness!

This is a tip-top box from TokyoTreat. My only problem is stopping myself from eating everything at once!