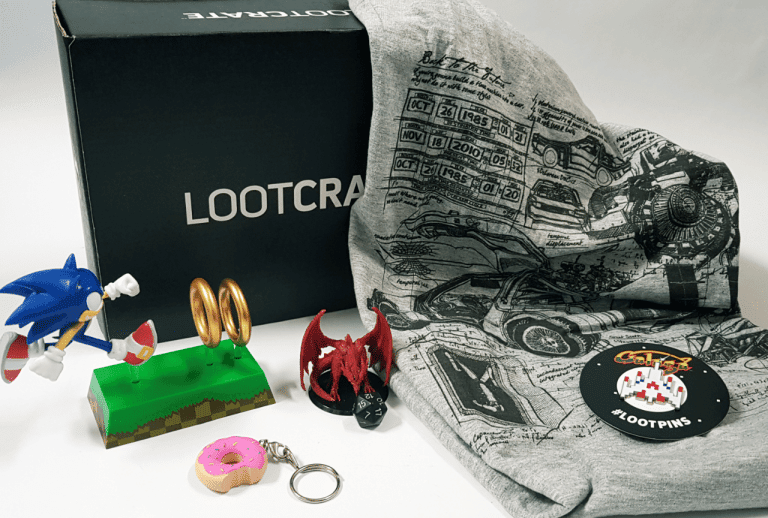 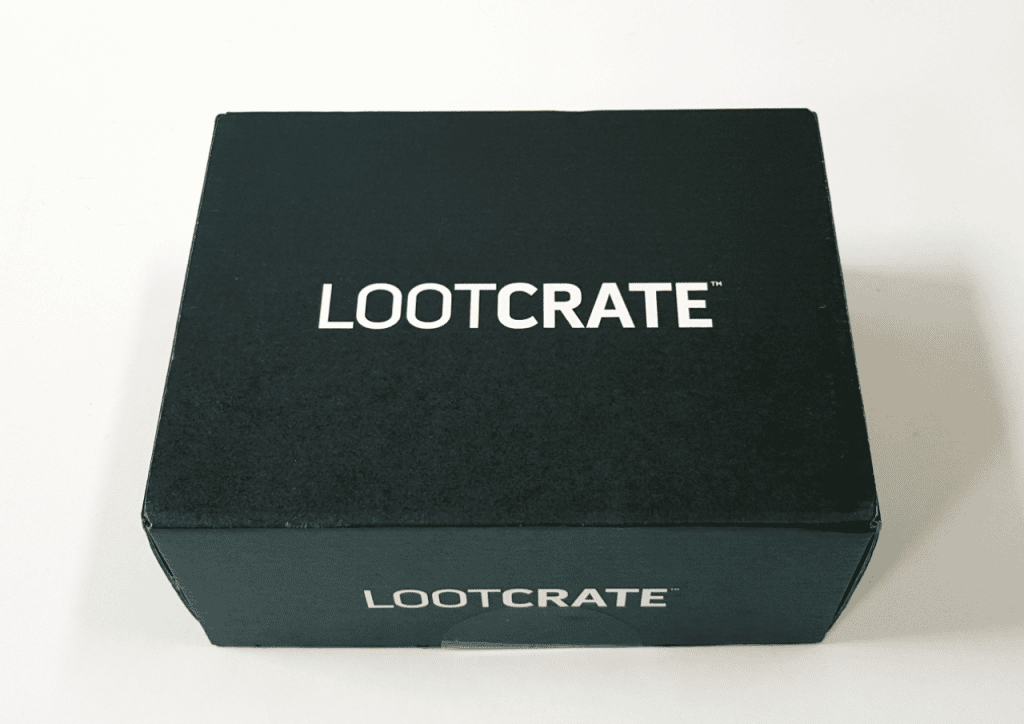 This month’s theme is PLAYBACK. 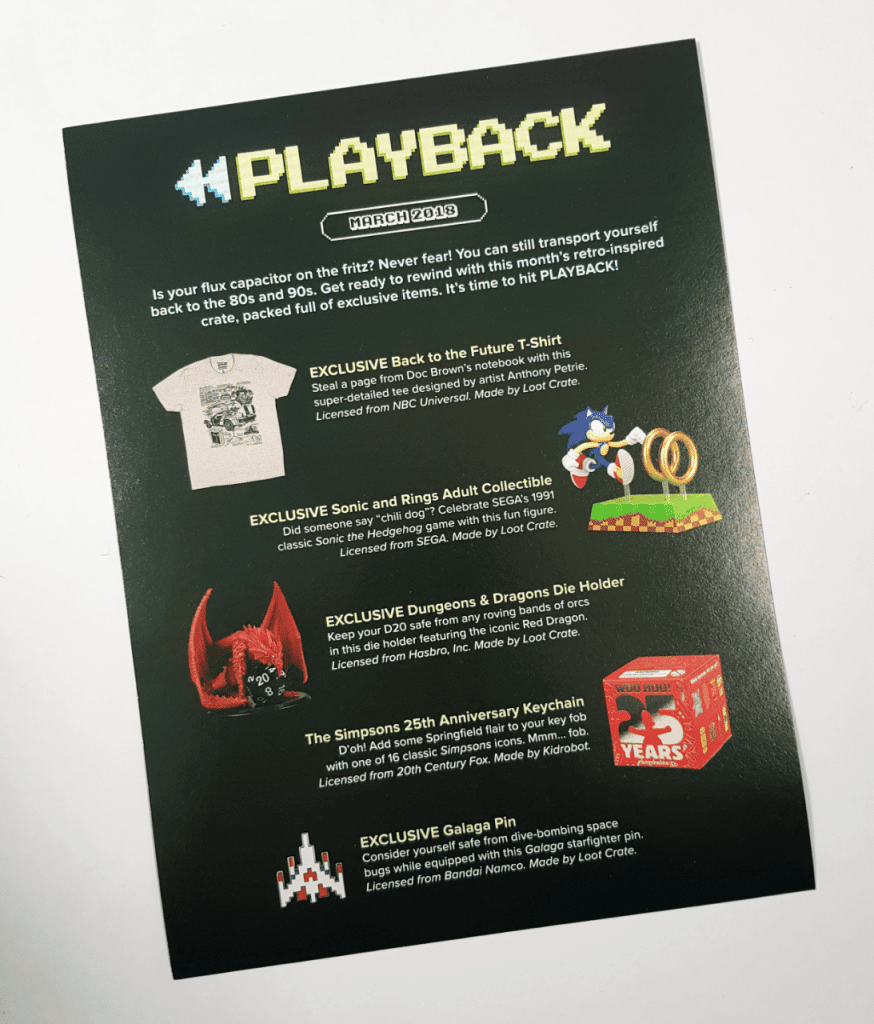 A lot of retro themes going on here! 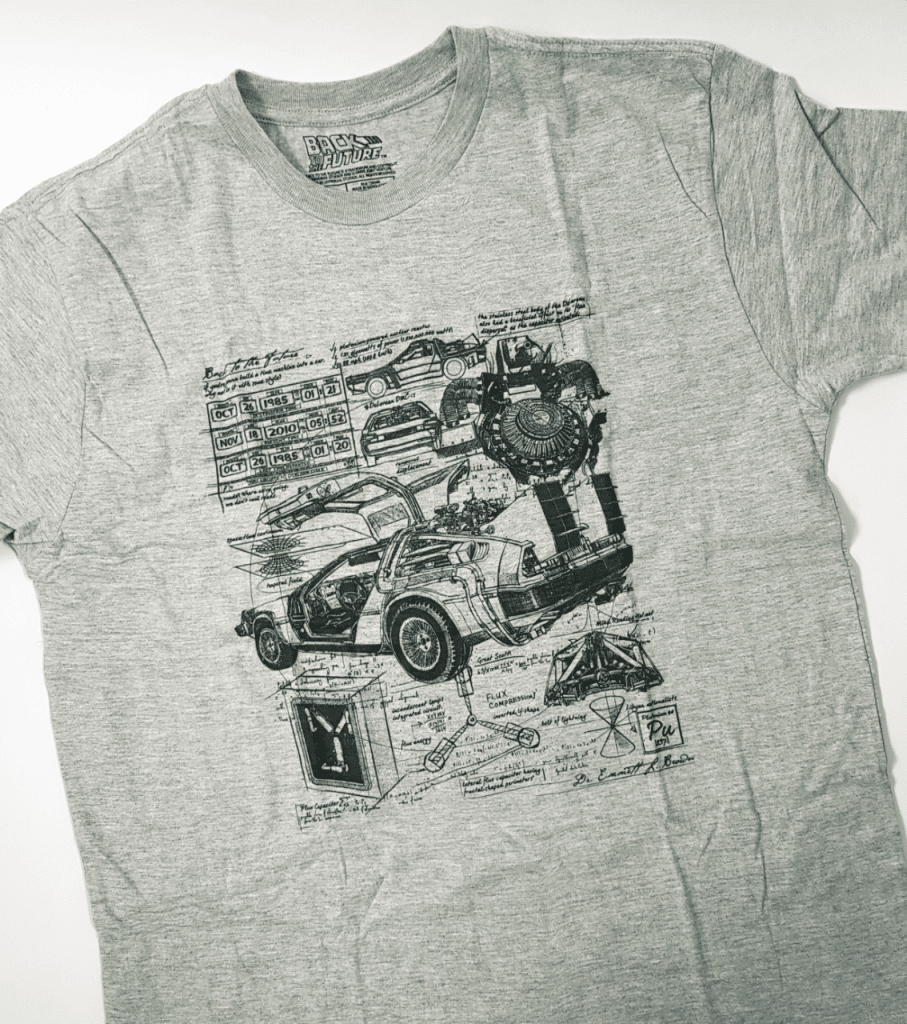 This month’s t-shirt is Back to the Future, showing a very detailed design of the famous DeLorean car time machine. It’s designed by the artist Anthony Petrie. 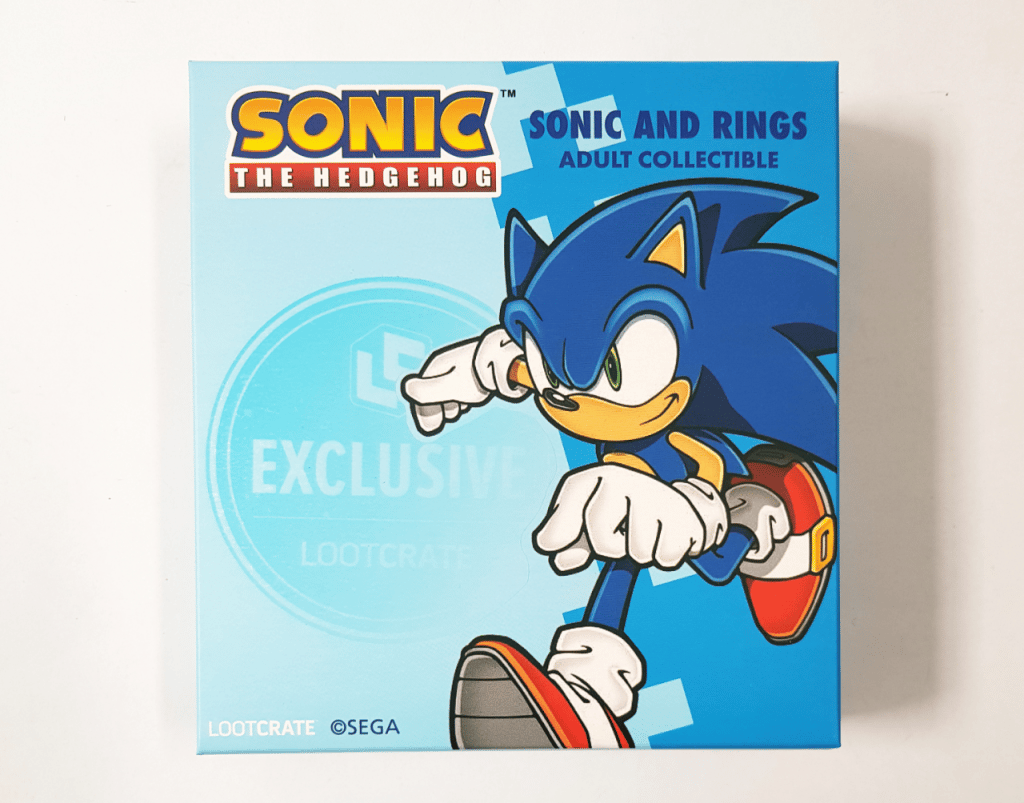 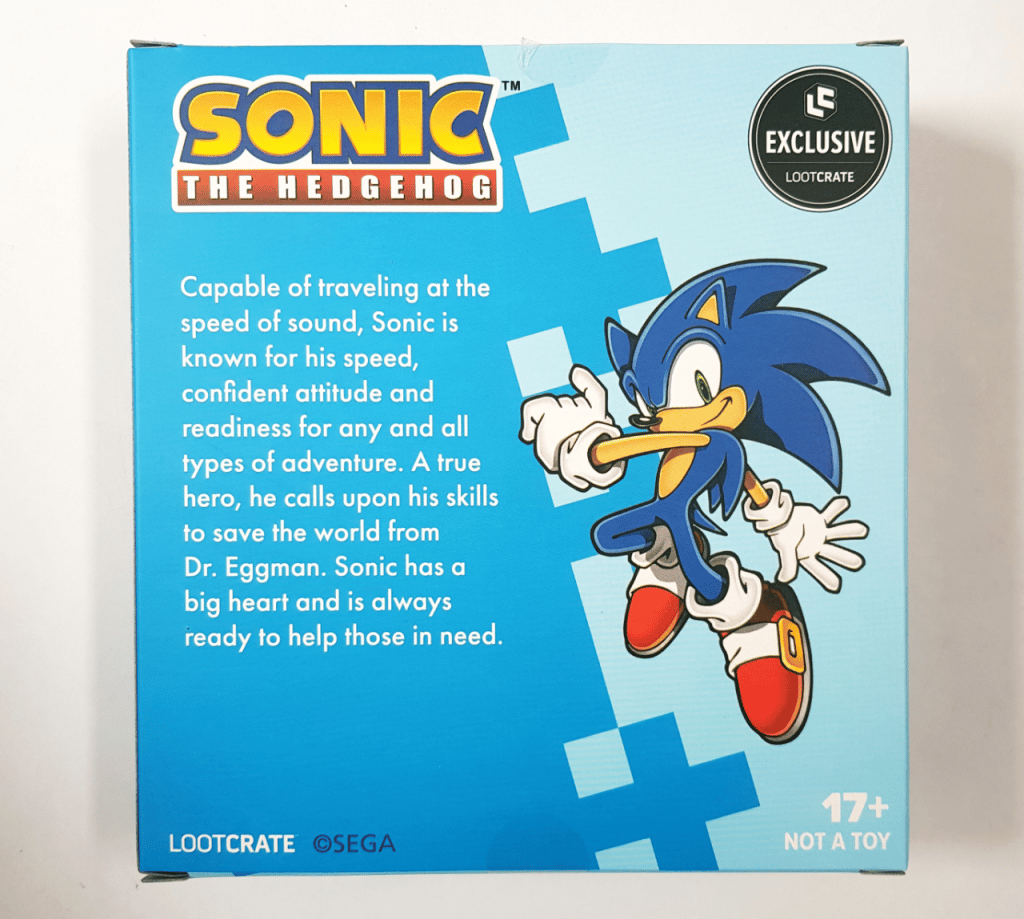 This is a Collectible Sonic and Rings Figure. 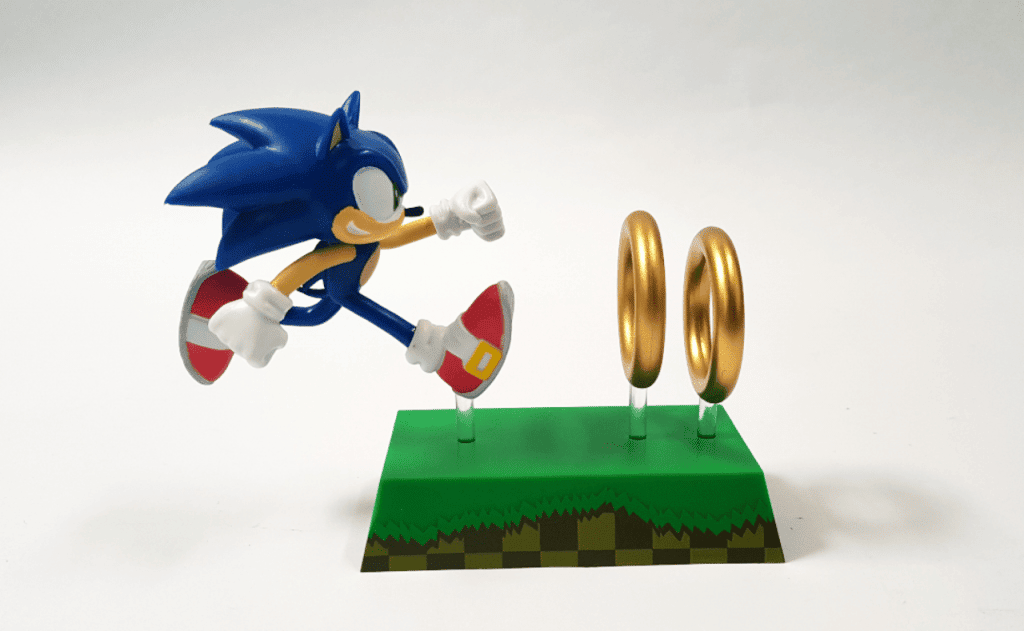 It shows the famous hedgehog video game character leaping towards the health-giving rings. It comes the three pieces that slot into the base. 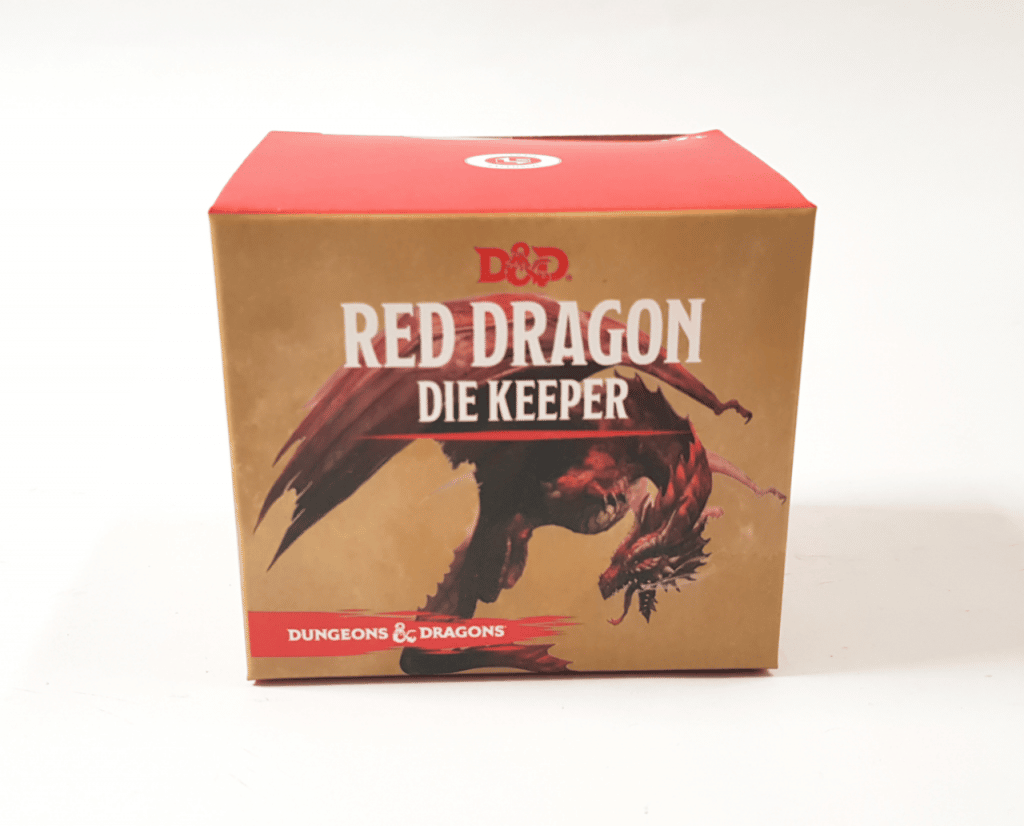 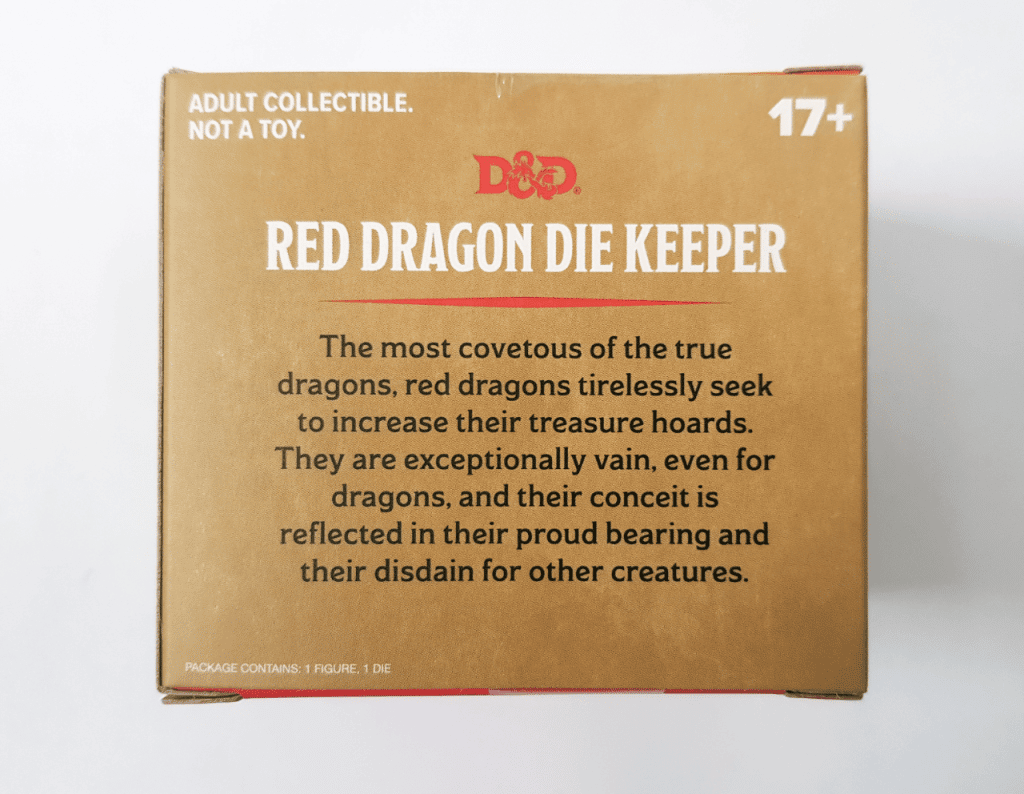 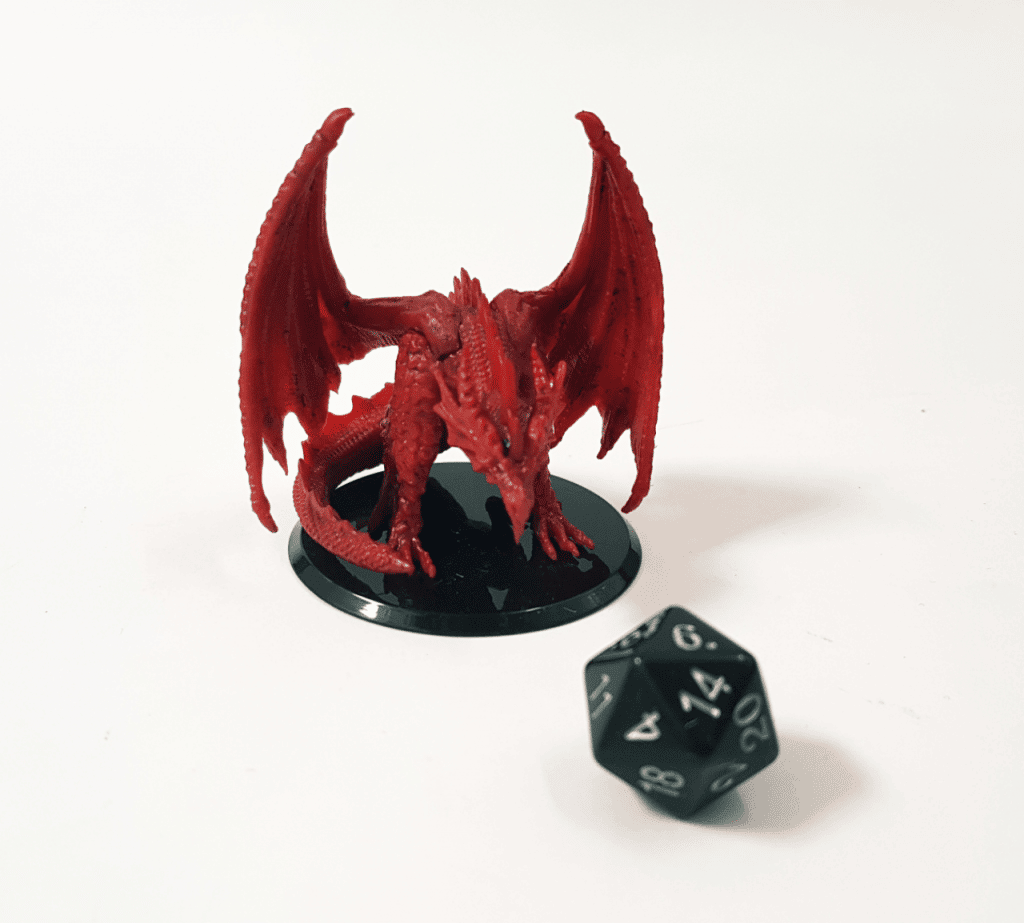 This Dungeons & Dragons Die Holder comes with a 20-sided die. It tucks in under the dragon’s chin. 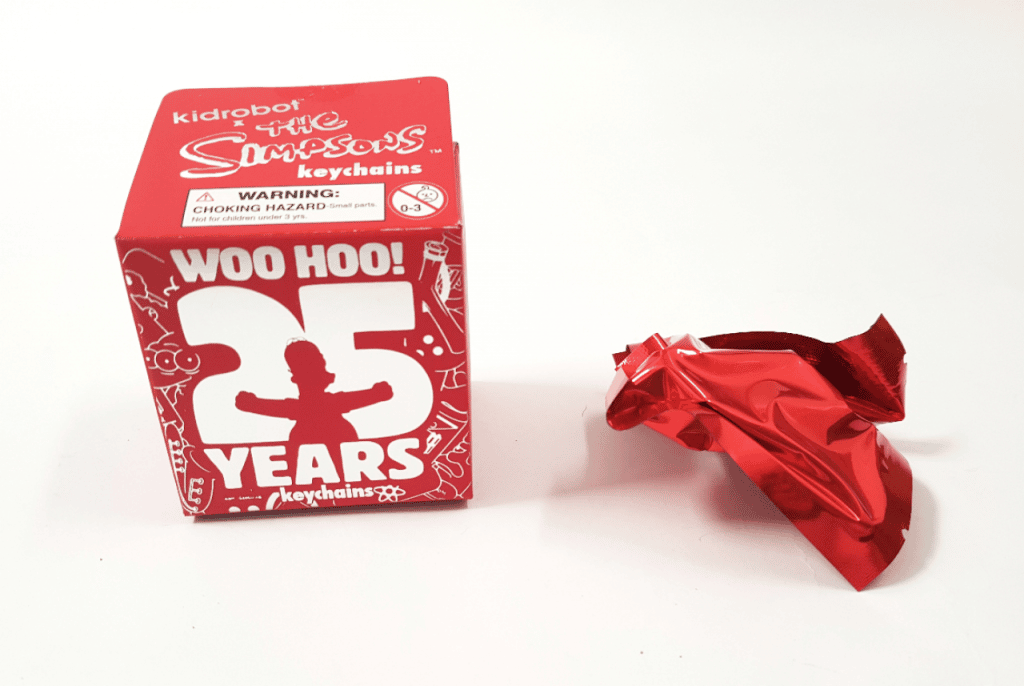 The Simpsons 25th Anniversary Keychain comes in a blind bag. 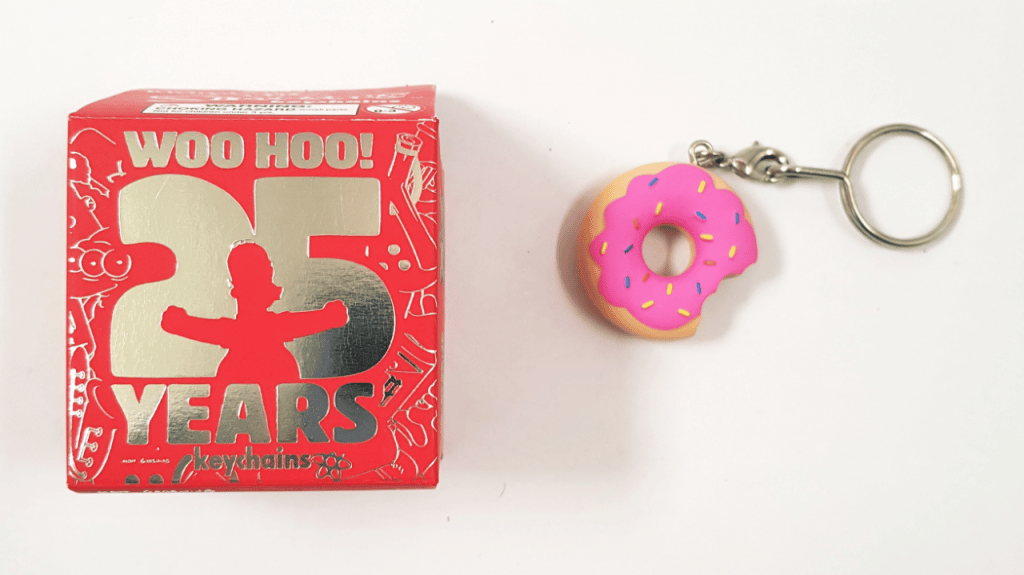 There are 16 possible designs, and this one is one of Homer’s donuts, complete with a missing bite. 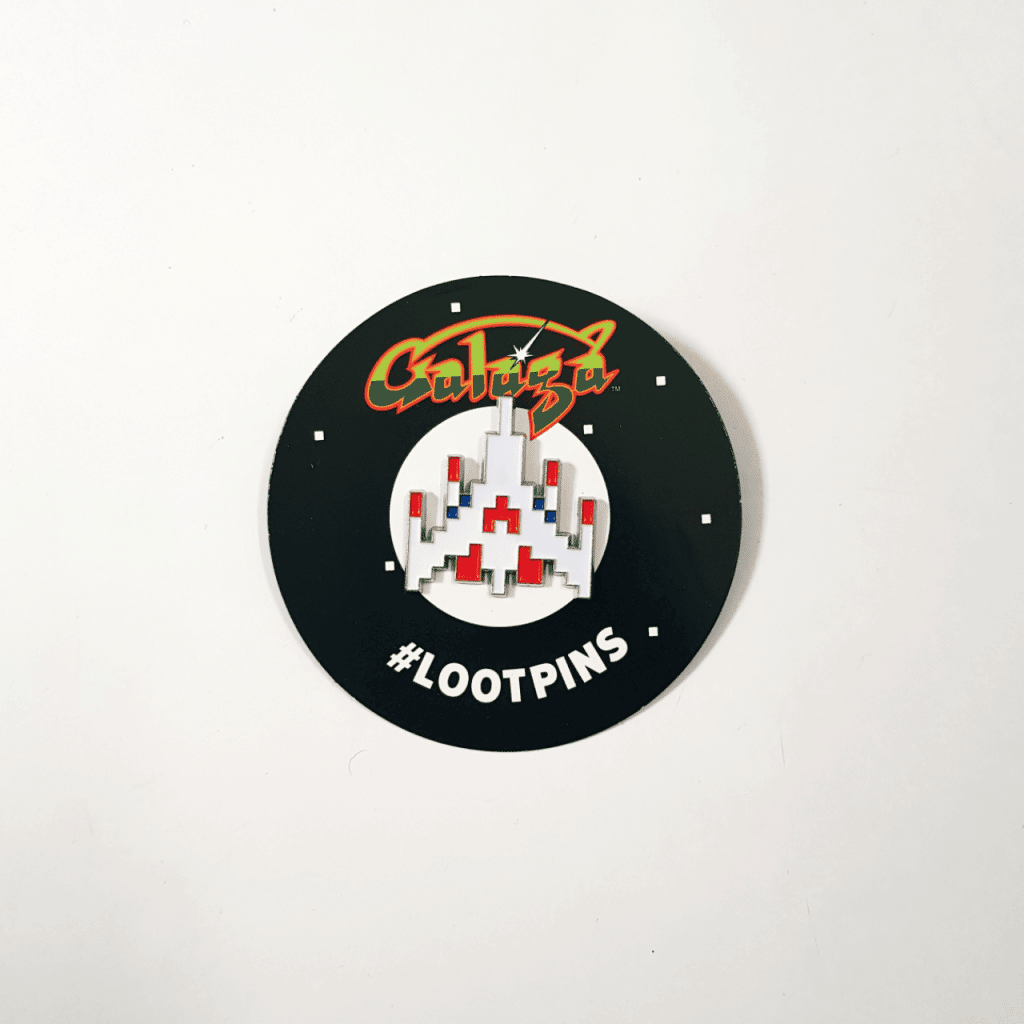 Finally, this month’s Loot Pin. It shows a Starfighter from the arcade game Galaga.

Sonic model – This is a Loot Crate exclusive, so I’m going to say £10.

Dragon Die Holder – it’s small but the detailing is good, and it comes with a die, so I’ll say £10.

As usual, a good value on the face of it.

I like the t-shirt, it’s a great detailed design, though it’s not 100% cotton.

The Sonic model shows the latest incarnation of Sonic, not the classic design from the early 90s, so I wouldn’t really call it an item with a retro feel. As a model it’s OK, though it’s small and doesn’t feel premium.

My husband absolutely adores the die holder, and while I’ve never been into D&D I can see it’s quite a nice thing to have, with a strong nostalgia element for the fans. It’s good that it includes a die as well.

The keychain is quite cute and the quality is OK. I’m not a great fan of keychains because they always seem a bit filler-y, but this one is nice enough.

The pin isn’t as good as usual. I know it’s supposed to have that retro 8-bit kind of look, but I don’t think it’s very interesting or original.

I still miss the menu booklet. The other side of the leaflet had what was basically an ad for comiXology, which is an online comics company owned by Amazon, and plugs for the monthly draw, youtube, and community stuff. It looks like they’re not even bothering putting the magazine booklet online any more, as there’s still last month’s up on the link.

As always seems to be the case, this is a bit of a mixed bag. The die holder is a big hit with my husband, as he spent a large part of his childhood playing D&D, and I like the design of the t-shirt. It may be picky, but I think if you’re referring to Sonic as a retro game (the release date of 1991 is mentioned in the menu) you really need to show Sonic how he looked in 1991, which is pretty different. In general I think Loot Crate has become weaker over the last few months. The magazine has vanished, delivery is never in the actual month of the box itself, and the themes have become so broad as to fit almost anything.  ‘Playback’ at least suggests something retro, so it’s nice to see a slightly more specific theme.

A reasonable selection of retro-themed items, with a stand-out piece.