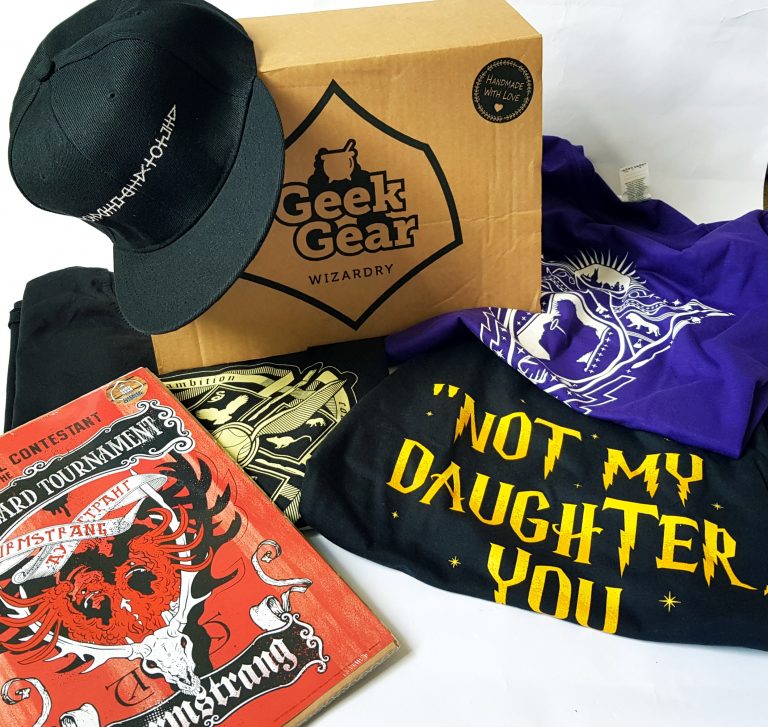 The Geek Gear Wizardry box, has a wearable companion box!

It promises every box contains 2 t-shirts, 1 jumper/hoodie/long sleeved  t-shirt, plus 1 – 2 other accessories including hats and scarves, and will both licensed and exclusive items. I’m also happy to see that they offer kids’, unisex, and women’s t-shirt sizes. 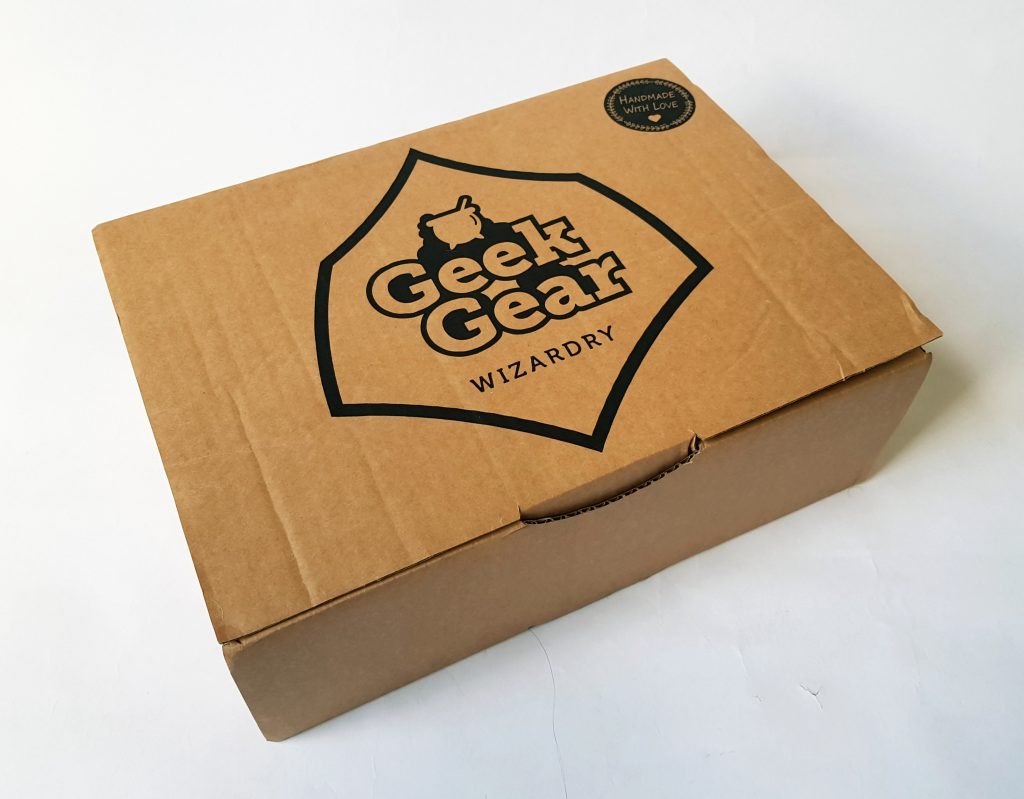 The box comes in a mailing bag, but as it’s clothes no extra padding is necessary. 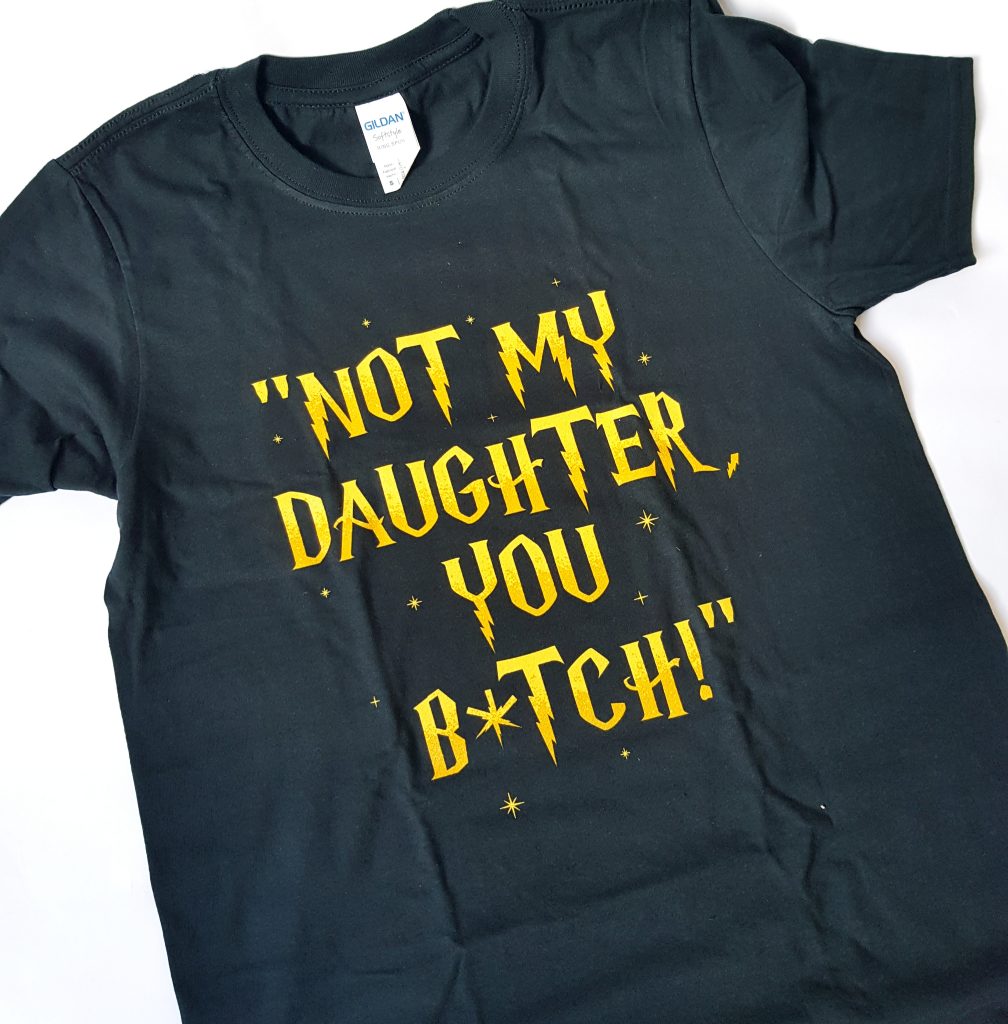 The first t-shirt has Molly Weasley’s classic quote to Bellatrix Lestrange in the final book, The Deathly Hallows. Of course, we all know what happens not long afterwards (hooray for Molly!).

It’s written in the distinctive Harry Potter lightning font, and has a discreet star in the final word, rendering it slightly less rude.

I do love this shirt because I appreciate the power of motherhood, but it’s not one I would wear in public. But it will be great for around the house, and as my daughter has already read all the Harry Potter books, I don’t mind her seeing this quote. 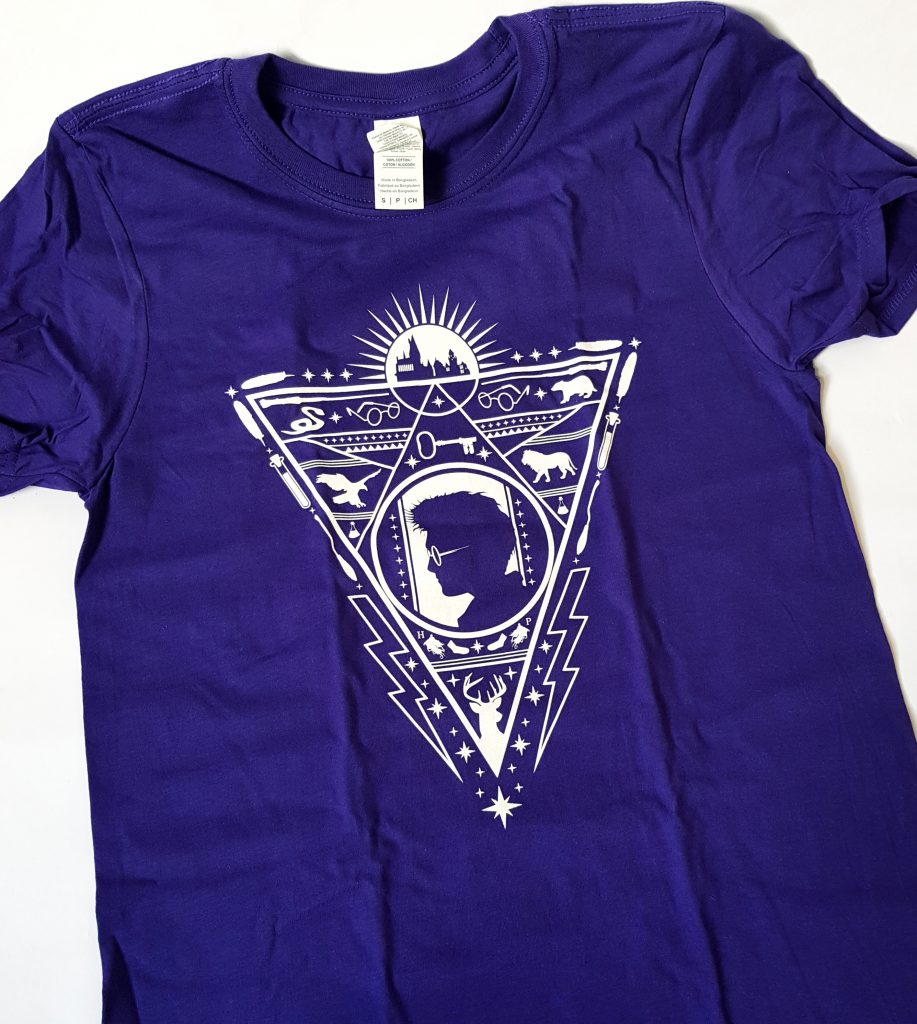 This is an exclusive ‘Triangle T-shirt’. It’s a nice combination of familiar Harry Potter symbols, with a silhouette in the middle. Can you see how many things are referenced in this design? 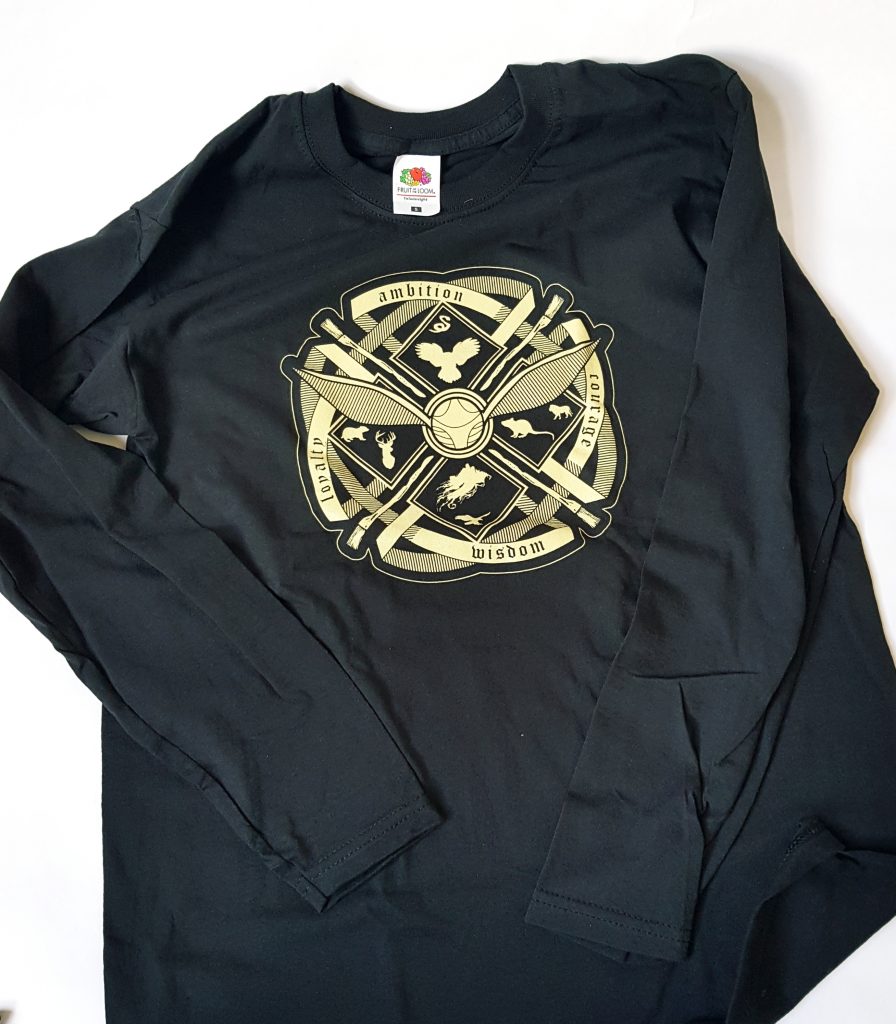 This is another exclusive, this time a long-sleeved t-shirt. The menu describes it as a wizarding sports design, but as well as the Golden Snitch in the middle, the words around the edge represent the character traits of the four houses. 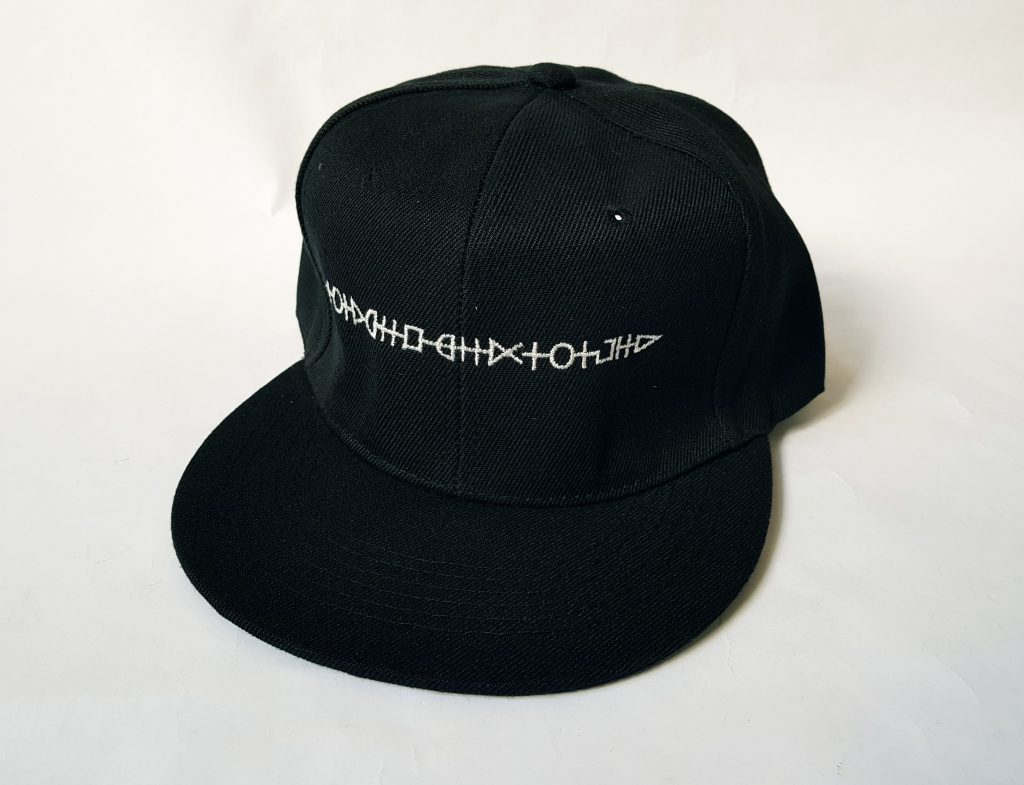 Finally, the accessory is a cap.

I wasn’t quite sure what the design was, but according to the menu it’s a wand inscription. The cap itself is otherwise plain back, with an adjustable strap at the back. 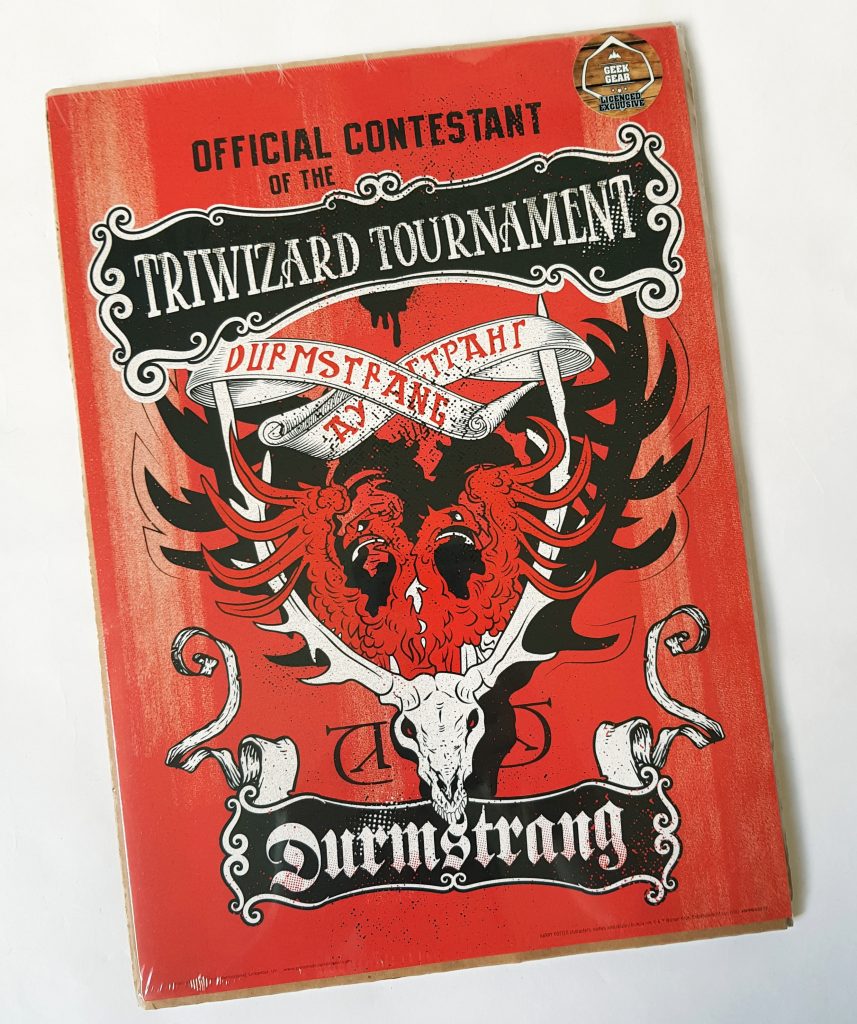 There is also an extra item, not a wearable but a print. This is pretty cool one, what looks like the Durmstrang crest as shown competing in the Triwizard Tournament. 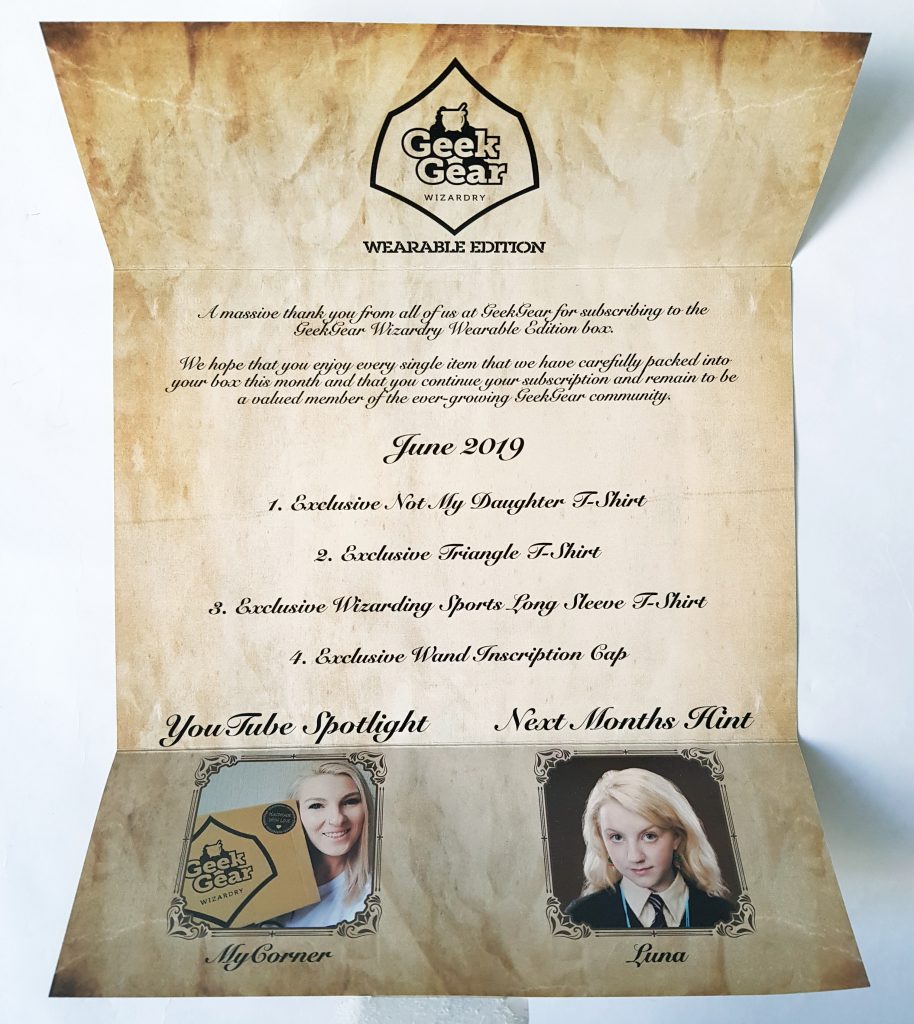 And here’s the menu.

My favourite shirt is definitely the quote shirt! I don’t mind that it’s not one to wear out (though plenty of people would!) because I love using my assorted geek shirts as nightwear.

I’m not so keen on the hat, mainly because I don’t wear hats of this type, but I know a lot of Potter fans so I’m certain this will be warmly welcomed as a gift!

It would be nice to see a licensed item as well. I’m all for the exclusives, but it can be nice to have something official as well.

The other two shirts are also nice, though I can see some similarities in the individual portions of the designs. But it is great to have a long-sleeved shirt as well, I really like them in the cold weather because cool t-shirts usually aren’t on show because of layering.

I’m totally confident that the value is excellent. A half-decent t-shirt will put you back at least a tenner, more for long sleeves, and you’ve three, plus a cap in there. Plenty of bag for your buck!

The print is a good extra bonus, especially because it’s unusual to see something from one of the other wizard schools.

I should also throw in that all the t-shirts are pretty good quality, and of course all 100% cotton, which is excellent.

I do like this selection of different tops, especially the more unexpected design! While one of the items isn't quite my thing, I'm very impressed overall with the designs, quality, and more opportunity to embrace the Happy Potter fandom!