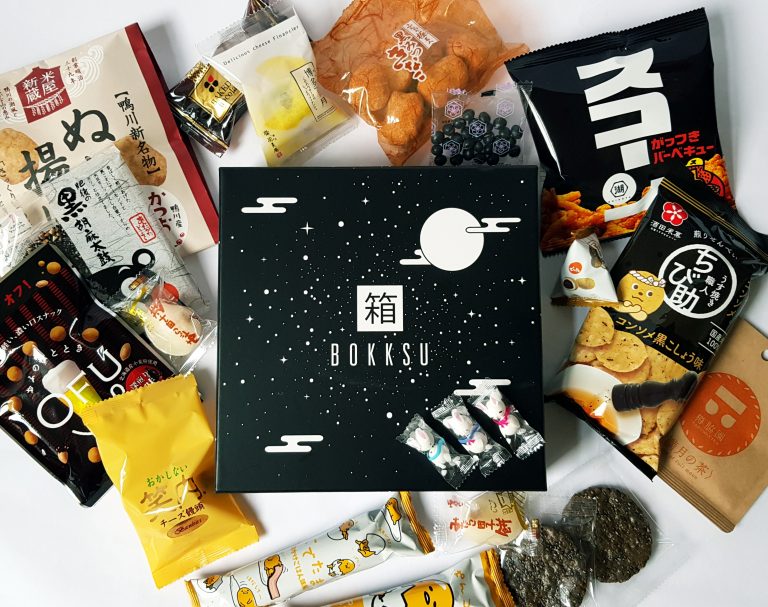 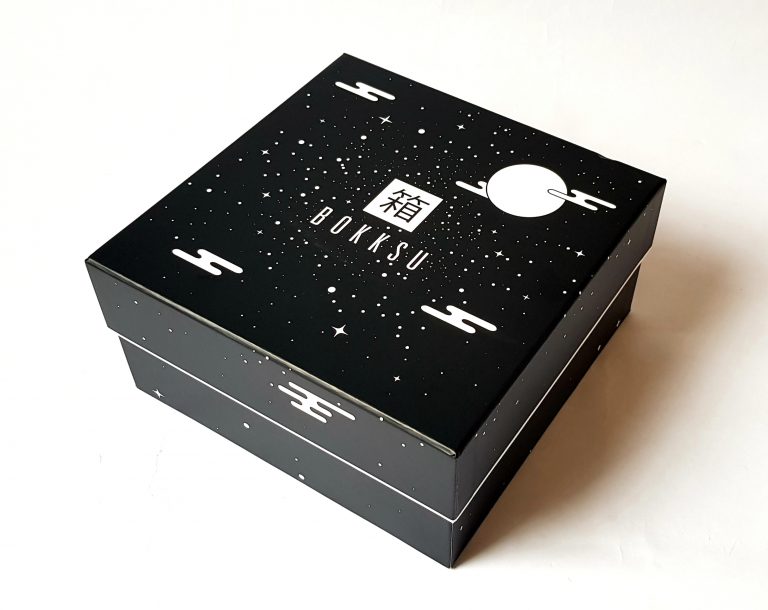 This month’s beautiful box is another special edition design, after the white boxes of the winter festive season. Here we have a celebration of the Moon Festival, a time of year to celebrate and honor the harvest. 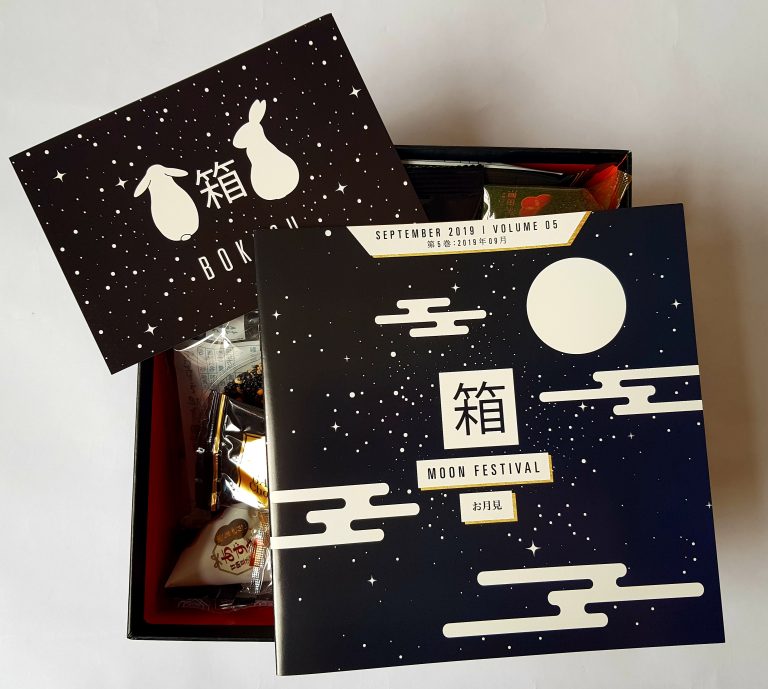 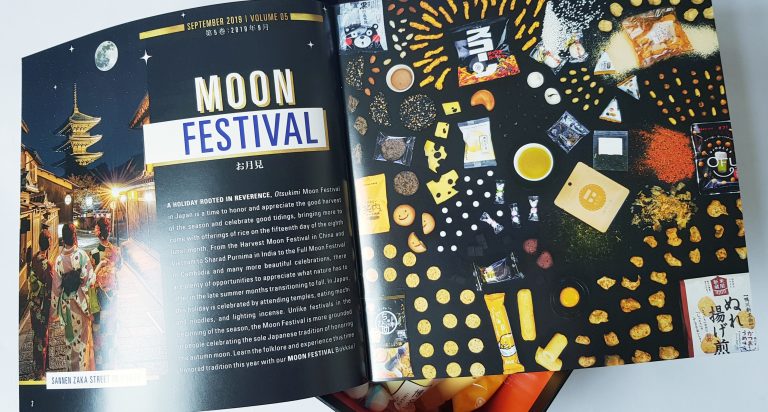 The menu booklet gives some history and folklore of this traditional celebration, as well as of course the full list of delicious contents! 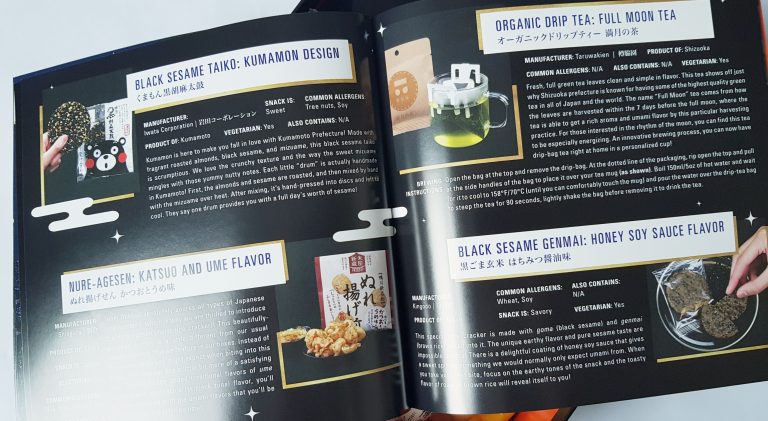 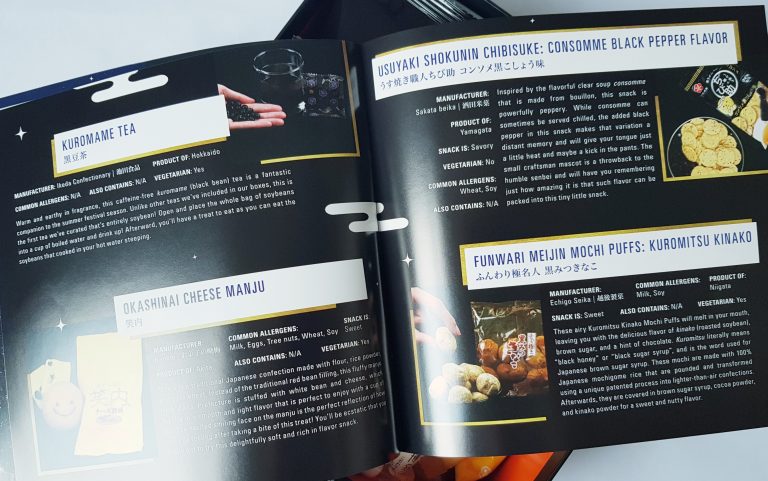 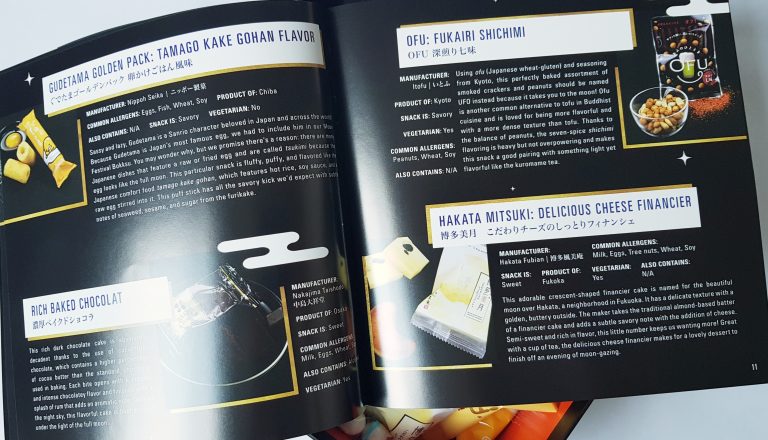 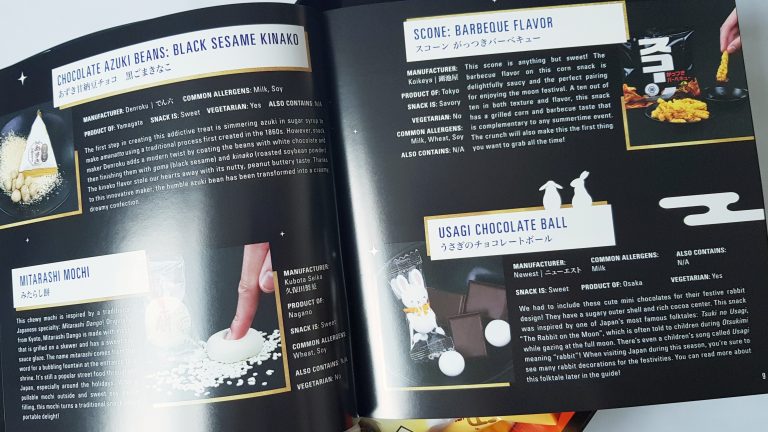 There’s even a map showing your the source of the various items. 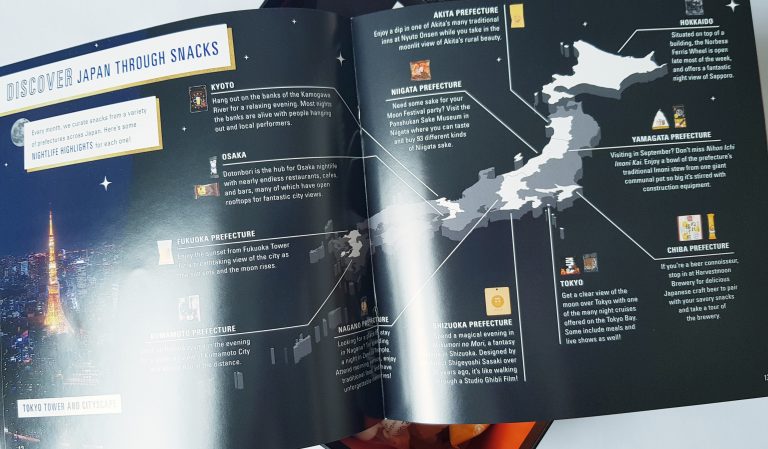 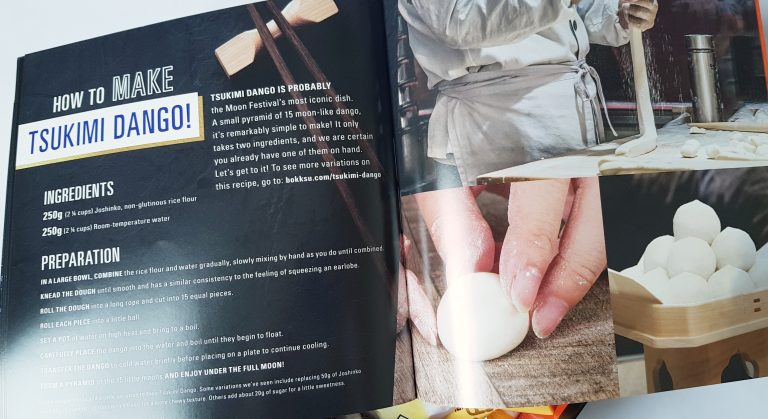 Plus you can learn to make Tsukimi Dango, which are traditionally served at this this of year, 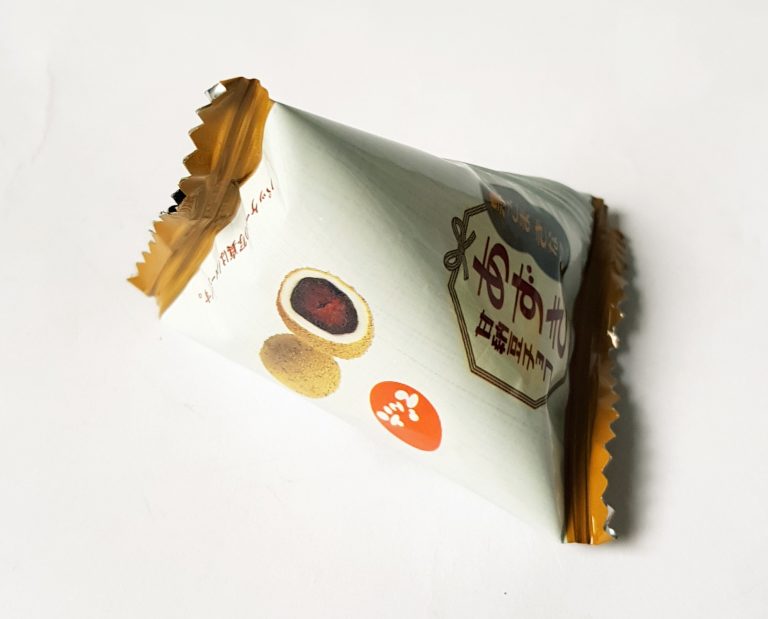 Here are Black Sesame Chocolate Azuki Beans. These are red beans simmered in sugar syrup, then coated in white chocolate, black sesame, and kinako (roasted soy) powder. These layers of flavours are very intense in such a small bean! 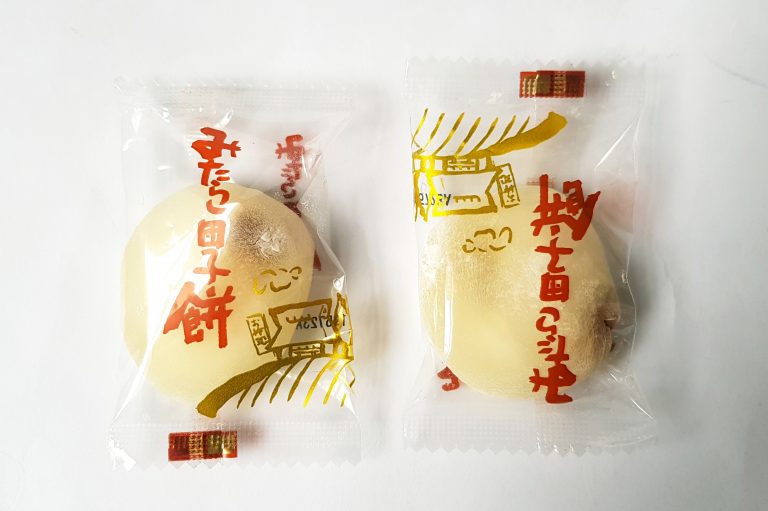 Mitarashi Mochi are chewy stretchy mochi inspired by Mitarashi Dango (recipe in the booklet) but rather than the plain rice balls, these have a sweet soy sauce filling. 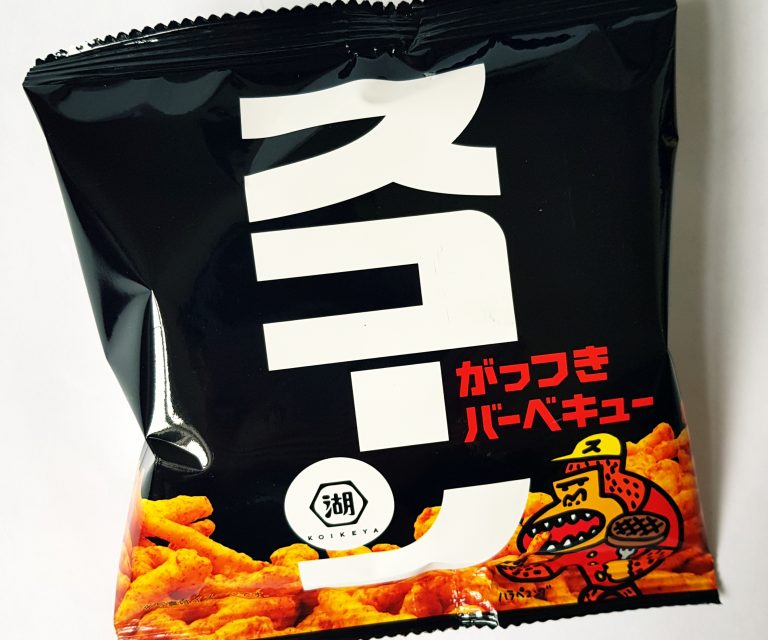 These might be called Barbeque Flavour Scone, but they’re nothing to do with actual scones! These are crunchy savory corn snacks, a little bit like British Nik Naks, that have a strong barbeque and corn flavour. Delicious! 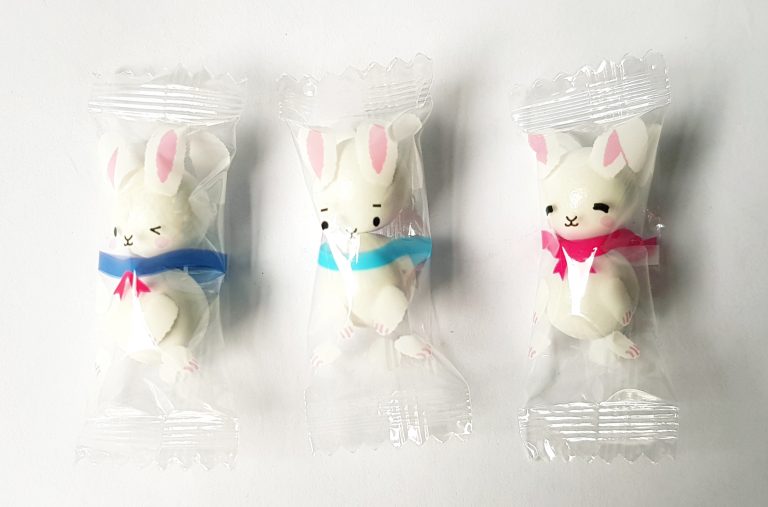 Usagi Chocolate Ball are adorable little packages of chocolate balls in a sweet sugar shell. The rabbit packaging is inspired by the famous Japanese folk tale ‘The Rabbit on the Moon’ which is very appropriate at this time of year! 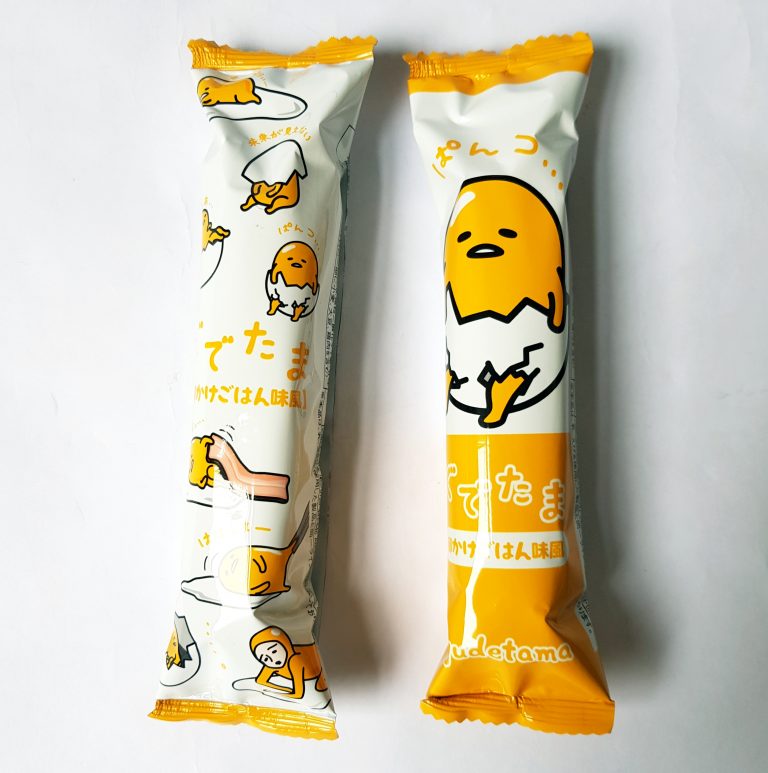 These Gudetama Golden Pack Tamago Kake Gohan Flavour feature my favorite Japanese character ever! This puffed corn stick is flavored like a popular Japanese dish of hot rice, soy sauce, with a raw egg stirred in. It turns out that this contains shellfish so I can’t eat it, but I actually don’t mind because the packaging is so cute! 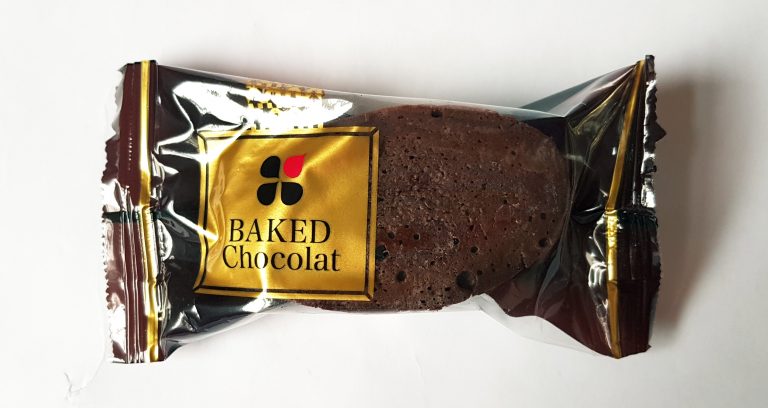 Rich Baked Chocolat  is a seriously chocolaty cake. It uses very dark chocolate plus a splash of rum to create a great depth of flavour. 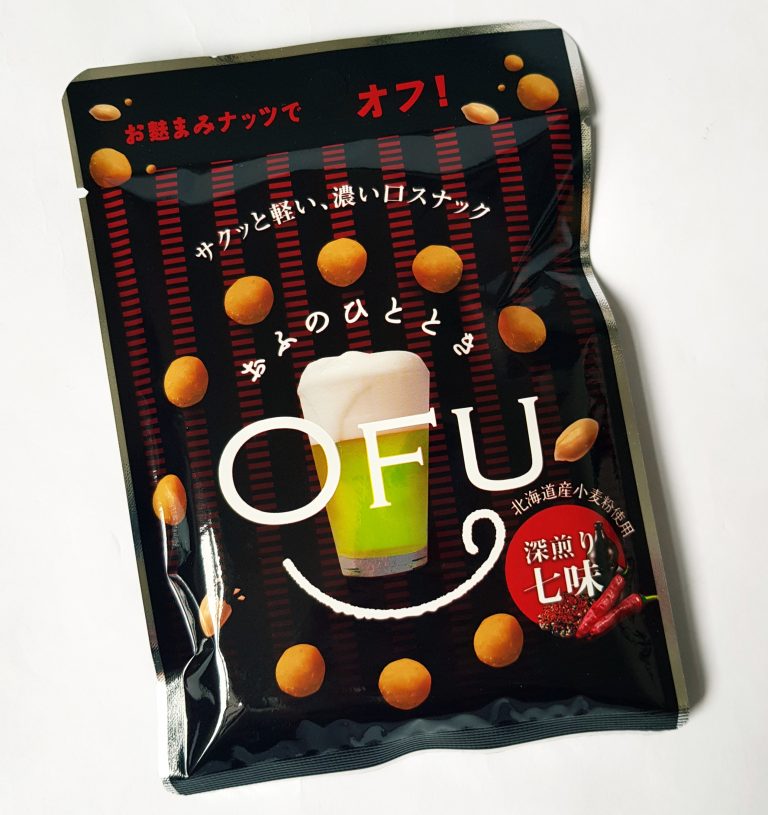 Ofu is Japanese wheat gluten and is a popular alternative to tofu. This snack is a combination of smoked rice crackers and peanuts flavoured with Schichimi, a peppery and spicy combination of seven spices. 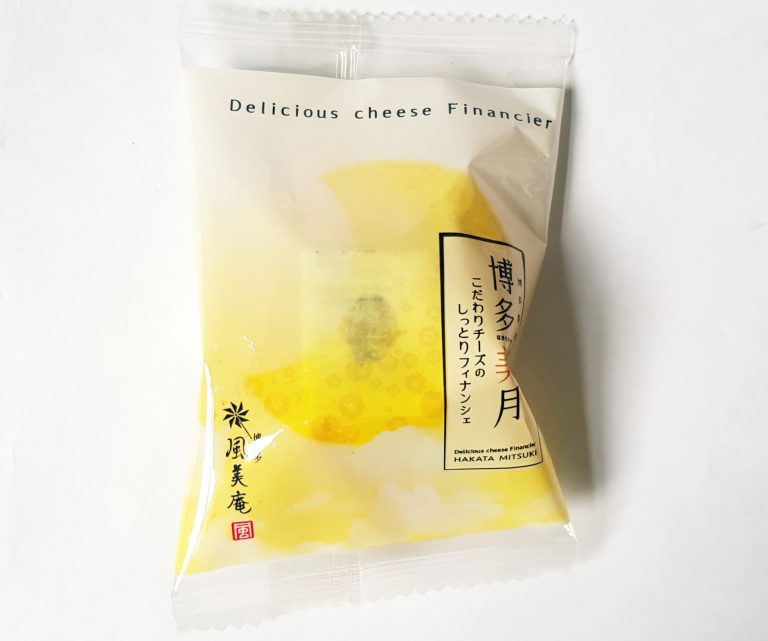 Hakata Mitsuki Delicious Cheese Financier may sound like rather unusual, but this financier, a cake made from almond flour, does indeed contain cheese! However the savory note is actually delicious, and surprisingly rich. 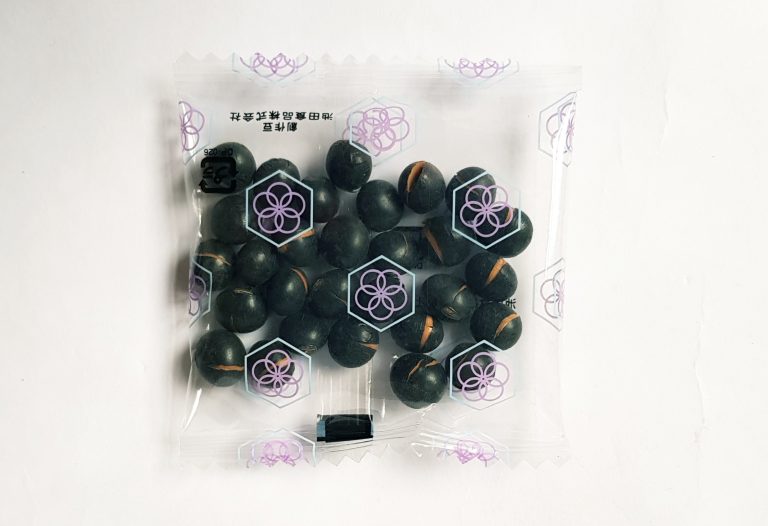 Kuromame Tea is definitely one of the more unusual tea varieties. This bag of black beans are soaked in water to give you an earthy and caffeine-free drink, and then you can eat the beans afterwards! 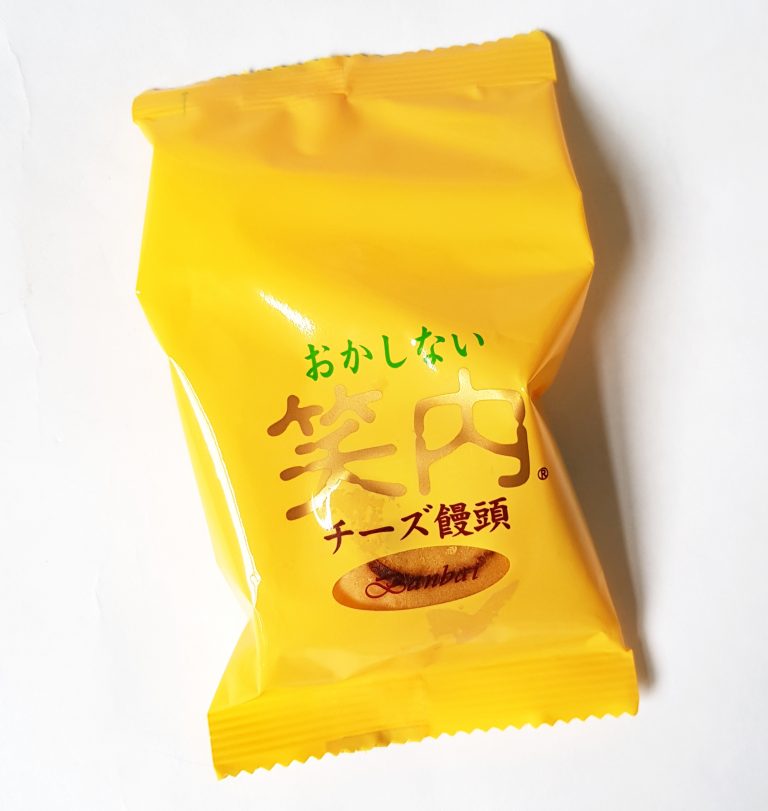 Okashinai Cheese Manju is another sweet item that contains cheese! This sweet steamed soft cake has a filling of white bean and cheese, and once again the cheese flavour is incredibly complementary. The cake itself even has a little smiley face! 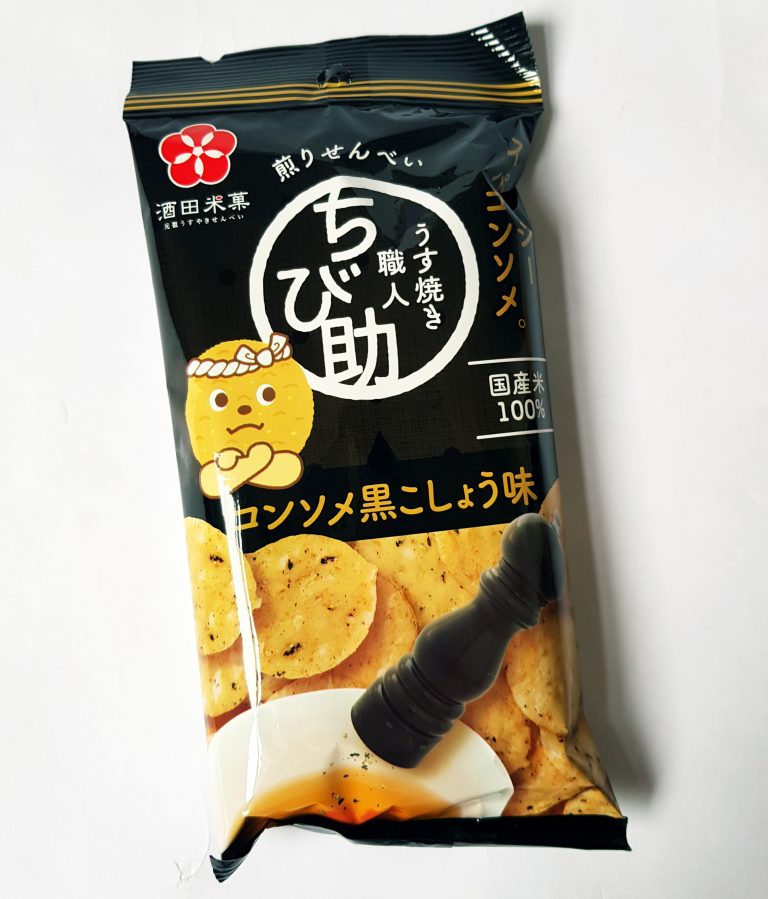 These are Consomme Black Pepper Usuyaki Shokunin Chibisuke, crispy senbei with a big savory peppery kick! Definitely a great snac to enjoy with a cold beer. 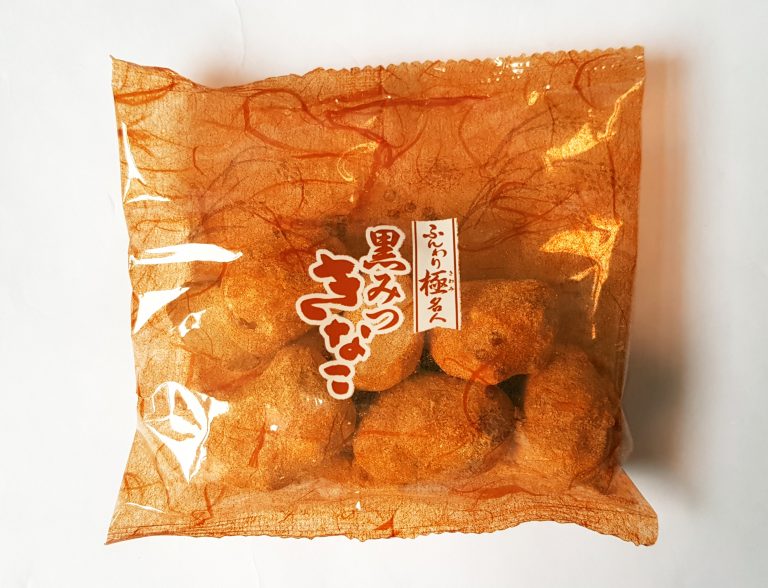 Funwari Meijin Mochi Puffs are one of the best things from Bokksu. They are mochi, but rather than being chewy they are incredibly light and crispy and melt in your mouth. There I’ve seen several varieties but these are my favourite, coated in brown sugar, cocoa, and deliciously nutty kinako powder. 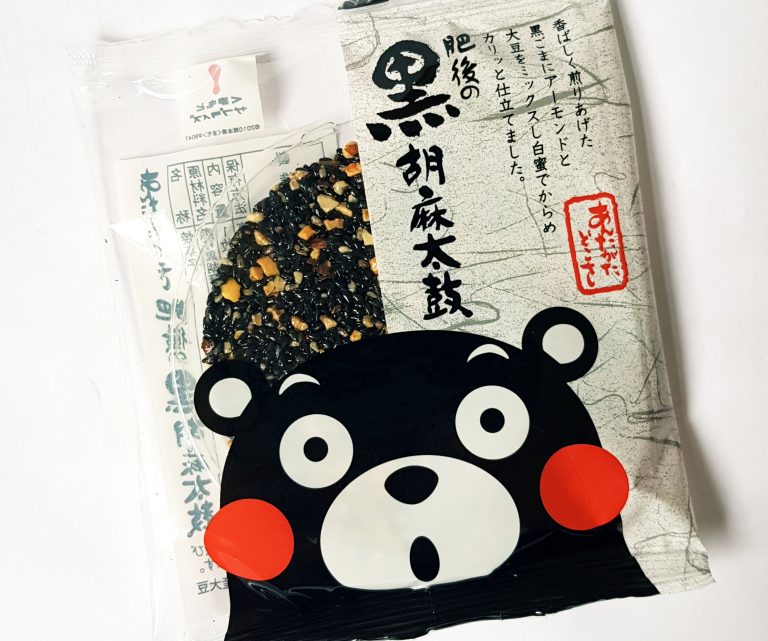 Black Sesame Taiko in a Komamon Design is a delicious crispy snack made from roasted almonds, black sesame, and mizuame, a sweet sticky liquid. These are handmade in Kumamoto, and are very tasty. 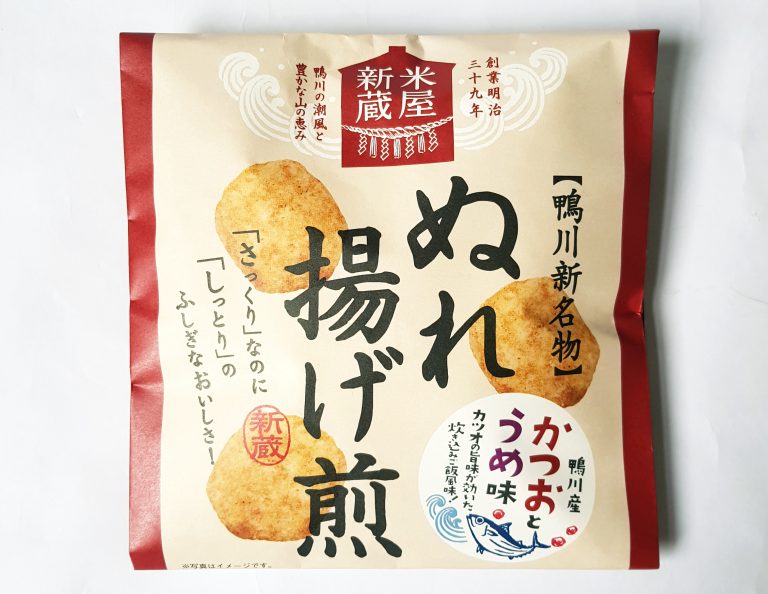 Nure-Agesen Katso and Ume Flavour is a senbei, but probably not a familiar one. Instead of the usual crisp crunch, nure-agesen means ‘moist rice cracker’ which are slightly chewy and have wonderful umami flavours of dried plum and tuna. 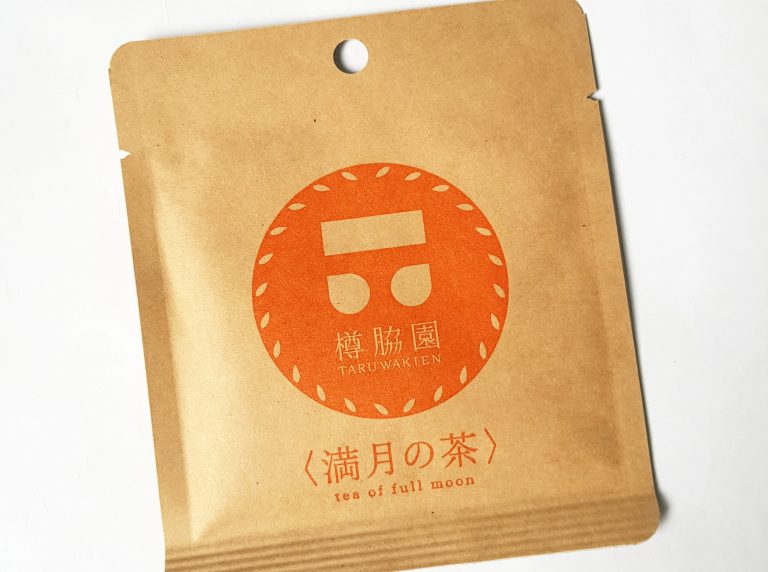 This is a more traditional teabag, Full Moon Tea is beautiful quality green tea. The bag itself is slightly unusual in that it comes in a frame that you place over the sides of the big and then pour over your water to steep the tea. It’s also known as Full Moon Tea because the leaves are picked in the week before the full moon, which apparently gives it an extra special flavour. 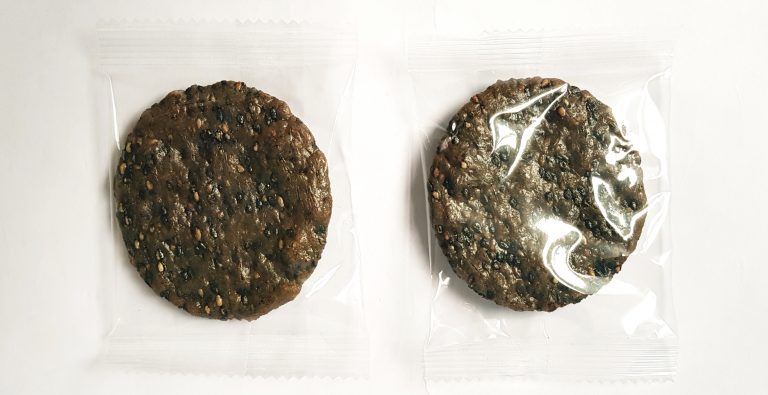 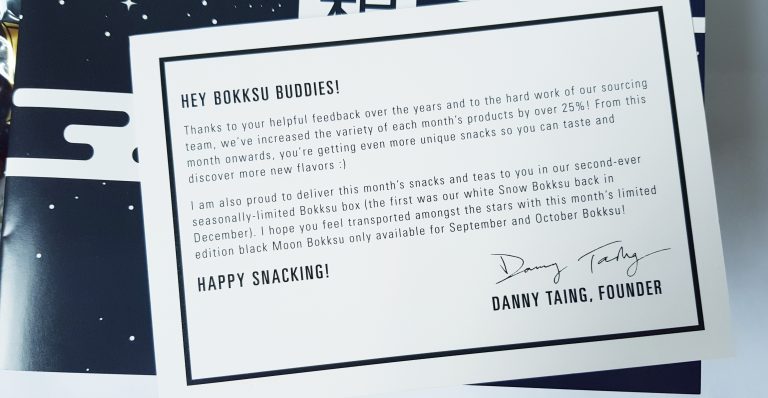 The contents of this month's box definitely live up to the beautiful design! There are some wonderfully new and unusual flavours and texture - who would have thought that cheese in a cake tastes good? One thing noted on the card (above) is that they've increased the variety of items in the box. I'm really happy about this, not that it wasn't great before, but I really like having even more different things to try. I should also mention that the menu booklet contains an allergy guide, which is very useful. A great selection as always this month, with lovely design and a really well thought out theme!