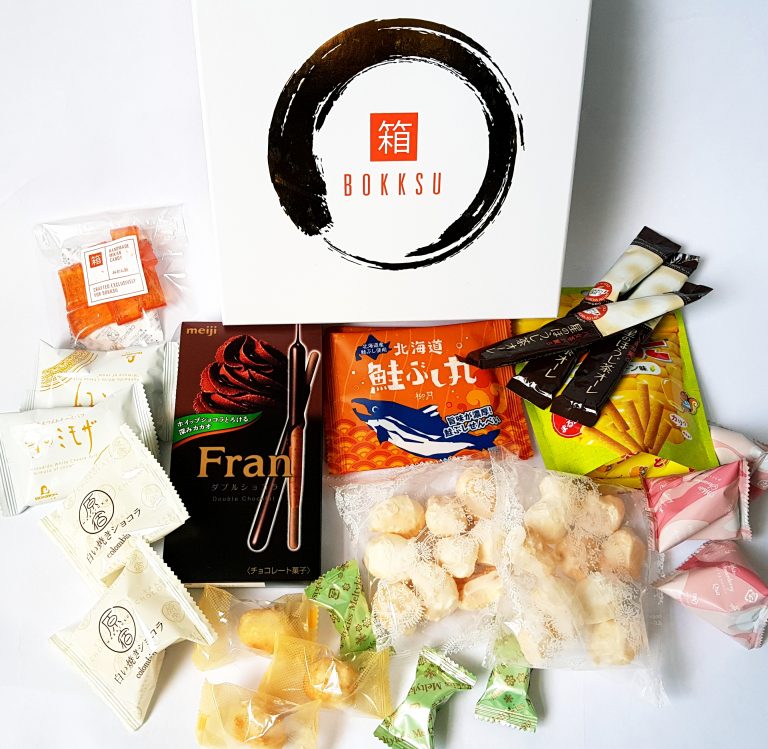 Bokksu is the only Japanese snack box that sources directly from snack makers in Japan, so many of our artisanal products cannot be found anywhere else. Start your cultural journey through Japan by subscribing to Bokksu and receiving a curated box of premium Japanese snacks and teas delivered to your door every month.
They have two levels of subscription: the Tasting, which is smaller, and the one I have received, The Classic.Subscriptions are prepaid for one, three, six, or twelve months.For the Classic box they work out at $39 (around £30), $37, $35 , and $33 per month.As usual, they are priced in dollars, so GBP conversion is according to today’s exchange rate. Obviously this will vary, but it gives you some idea of cost. 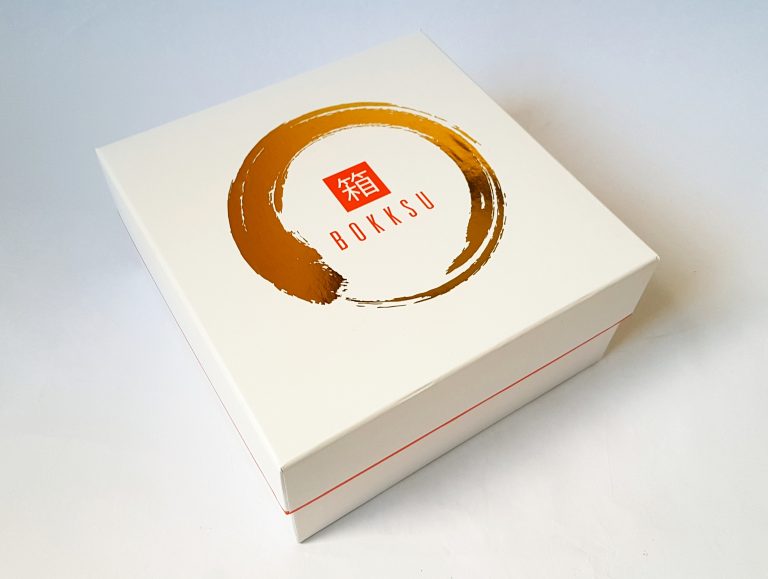 It looks like there’s a new box design! Very classy. 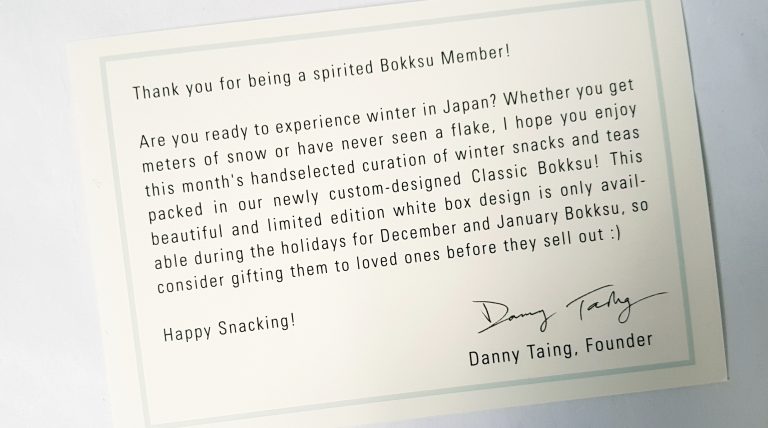 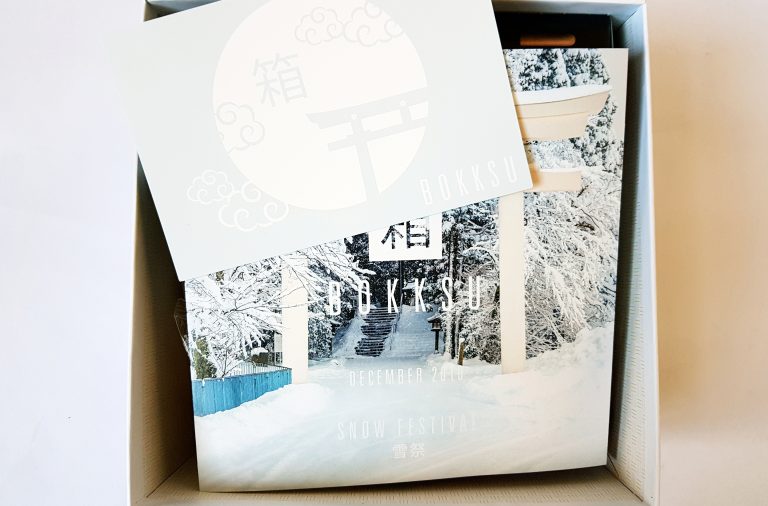 Here’s the menu insert. You’ve got an introduction to the theme, plus a map showing you where each item is from.

It’s a double fold so needs a couple of pictures to see the whole contents list. 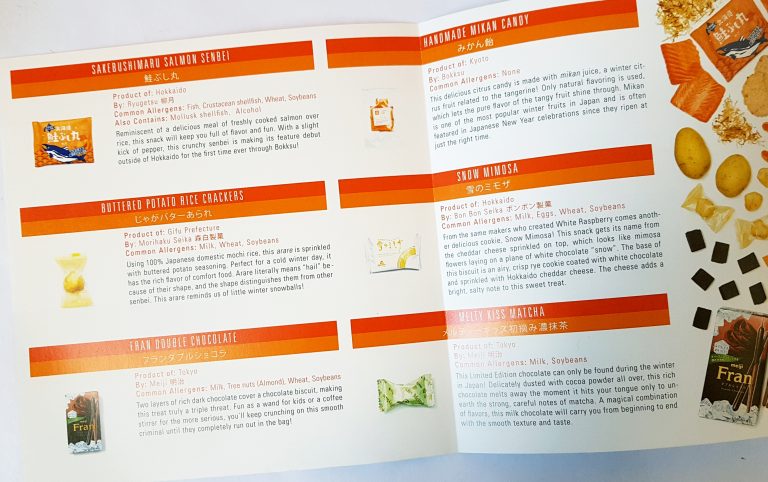 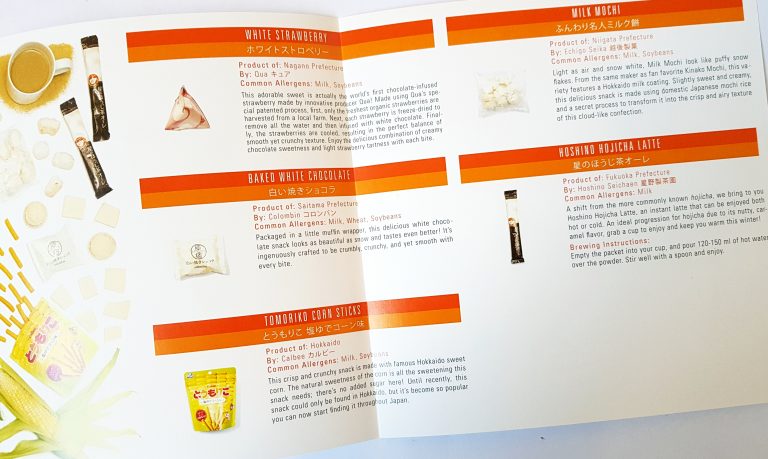 There are details of every item, including a very useful allergen list. 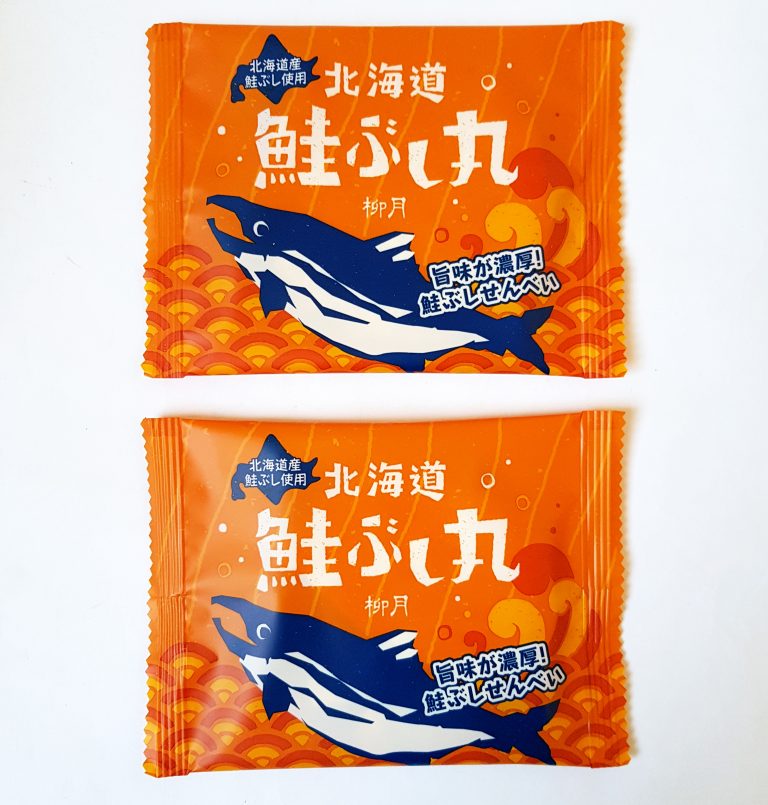 These lovely packages are Sakebushimaru Salmon Senbei. They are crispy rice crackers flavoured with salmon and rice. This is from Hokkaido, and apparently this is the first time it’s been available outside the island! 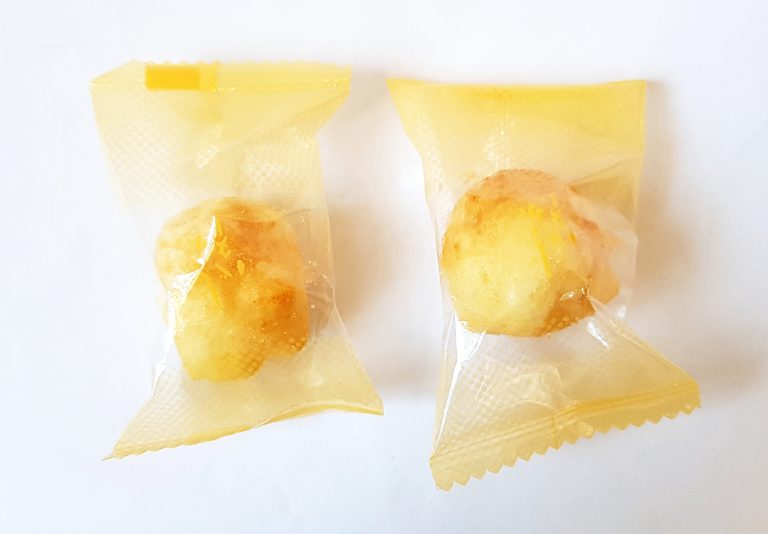 These Buttered Potato Rice Crackers look like little fluffy snowballs. They are sprinkled with buttered potato seasoning, and this kind of round senbei are called arare, which means ‘hail’ because of their shape. Close enough! 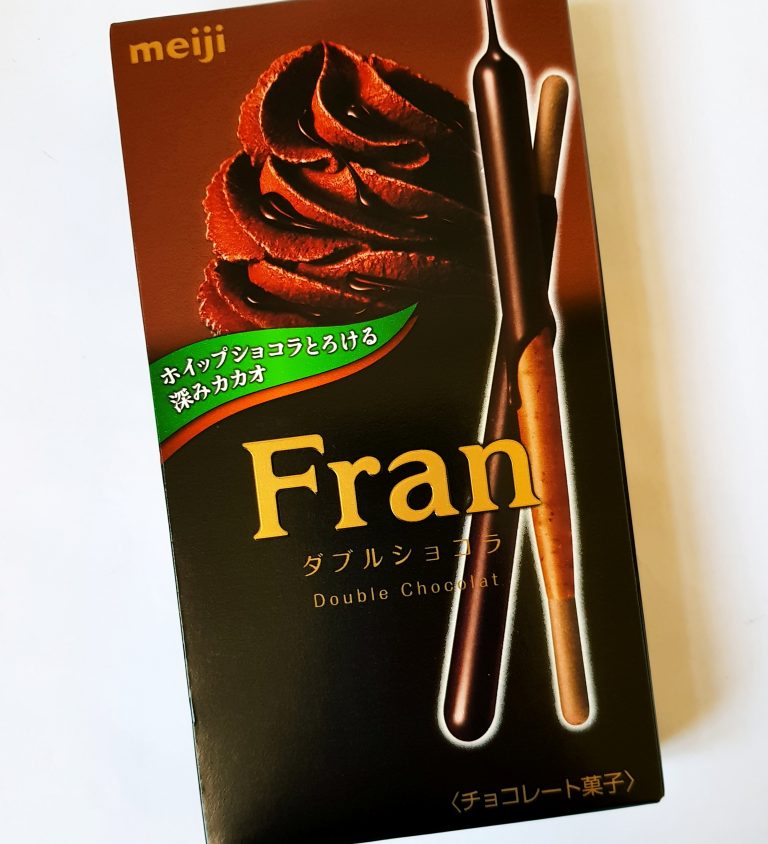 Fran Double Chocolate  will be a familiar type of snack. It’s a chocolate biscuit stick covered with two coats of dark chocolate. You can use one to stir your coffee, or simply eat them up, they’re delicious! 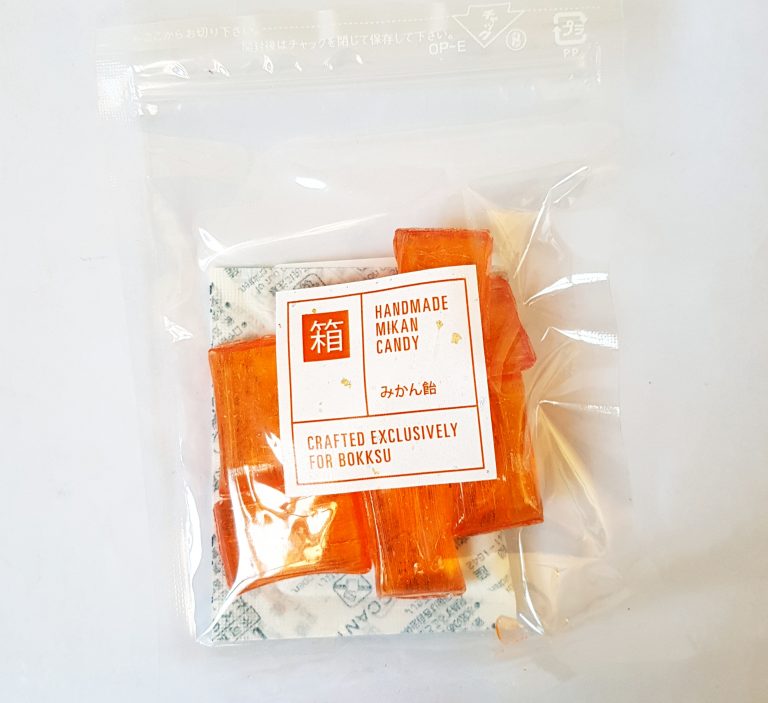 Bokksu has lovely candy specially made for them, and this Handmade Mikan Candy  is made with mikan juice, a citrus winter fruit similar to tangerines. 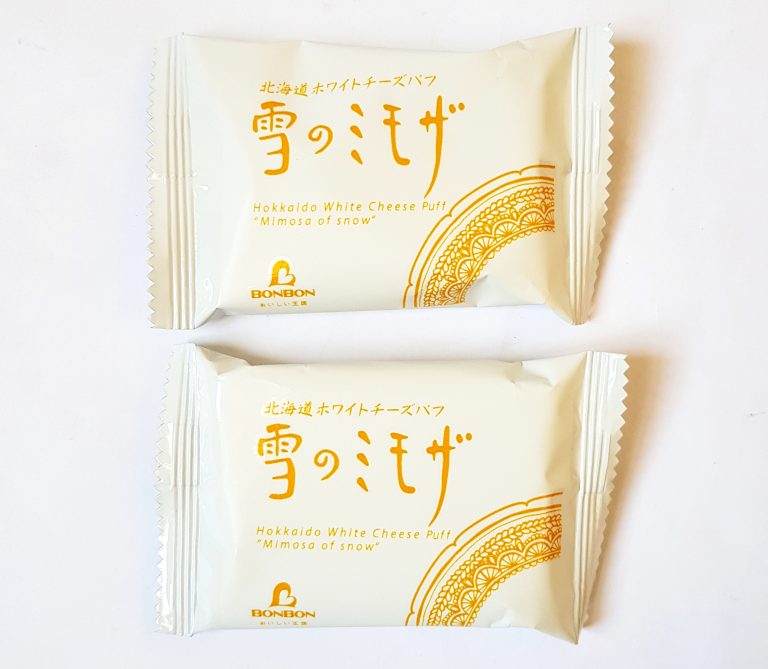 Another winter cookie, this is called Snow Mimosa. Despite containing cheese, it’s actually a sweet cookie coated in white chocolate with a sprinkling of Hokkaido cheese. It sounds odd, but I’ve tried a similar chocolate and cheese cookie from a previous box, and they taste surprisingly good, if a little unusual. 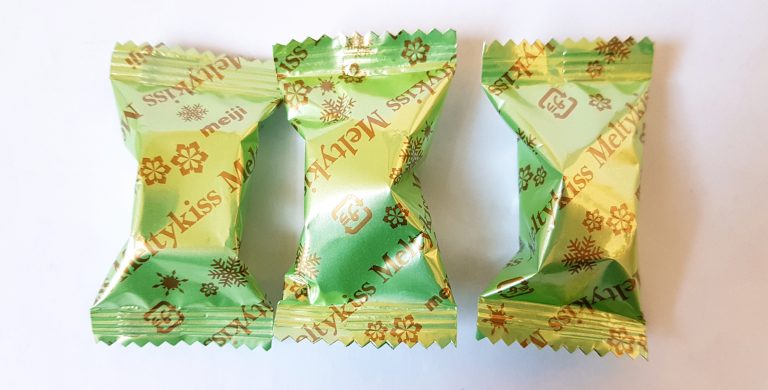 Melty Kiss Matcha are only available in Japan in the winter months. It’s rather like a dark chocolate matcha truffle, and melts in the mouth.

This amazing thing has featured in Bokksu before. Called White Strawberry, it’s a freeze-dried strawberry soaked in white chocolate. They are incredible! 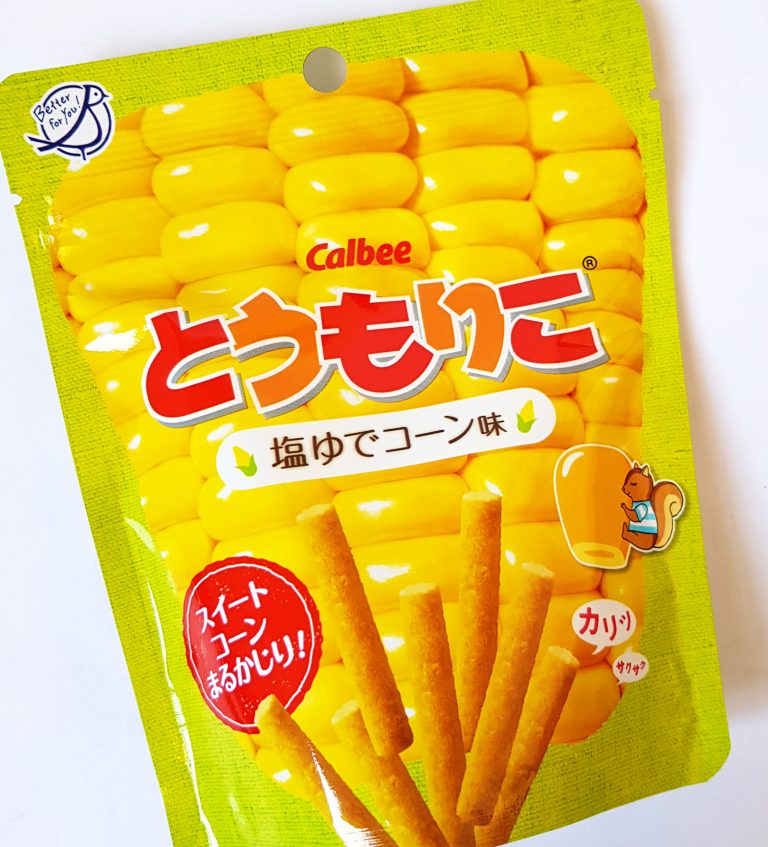 Tomoriko Corn Sticks are made from Hokkaido sweet corn, and despite not containing any extra sugar are really rather sweet. They are little crunchy crispy sticks, very moreish.

More fluffy snowballs, these are Milk Mochi. These are like the Kinako Mochi featured in previous Bokksu, but these are coated with a powdery milk taste. They are incredibly light, it’s rather like eating clouds! 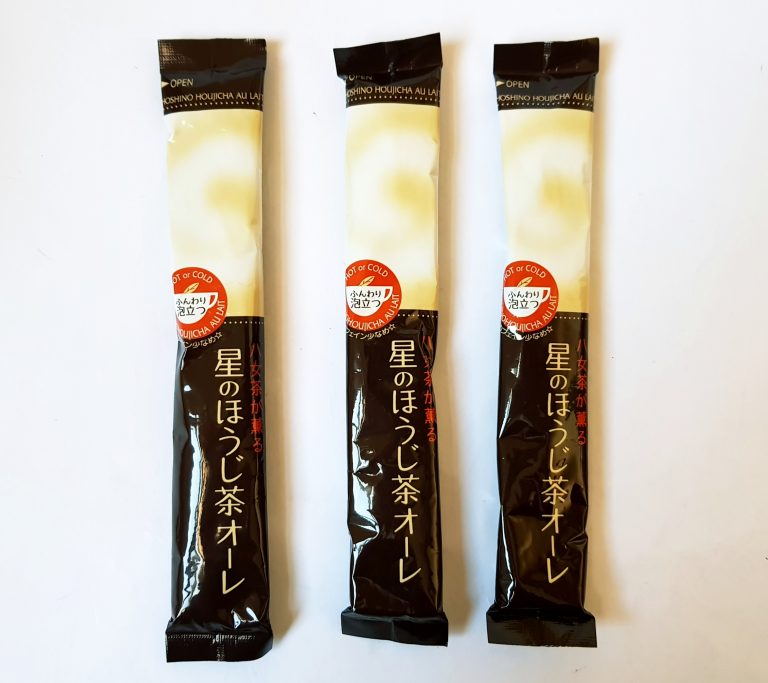 Finally, instead of the usual teabags we have Hoshino Hojicha Latte, which are instant latte sticks.

This is a lovely collection of wintery treats.

The Fran chocolate sticks are delicious, and the texture of the Milk Mochi is really incredibly, light and crisp and unlike anything else you’ve ever tried.

The only thing I cant have are the salmon senbei, as they apparently contain shellfish, but everything else is just fine. I’m less keen on the latte sticks, but that’s because I don’t really like instant coffee, so I’ll be happy to pass these on to someone who does.

I do like how they’ve managed to source things which resemble snow in some way. The seasonal nature of the matcha chocolate and the mikan candy means these are flavours you won’t find on a regular basis.

A very pleasing selection of yummy seasonal goodies, and a great opportunity to sample some special flavours all the way from Japan.