Bokksu: Discover Japan Through Snacks – May 2020

Bokksu: Discover Japan Through Snacks – May 2020 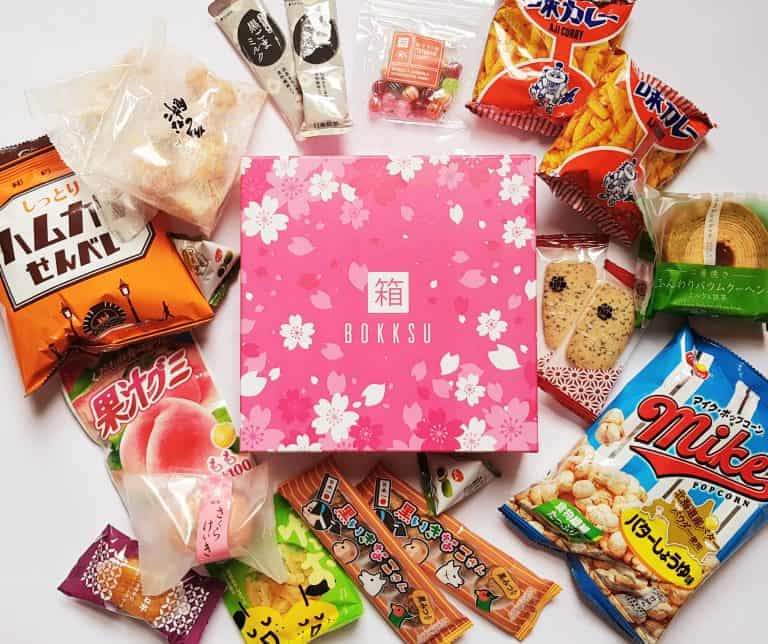 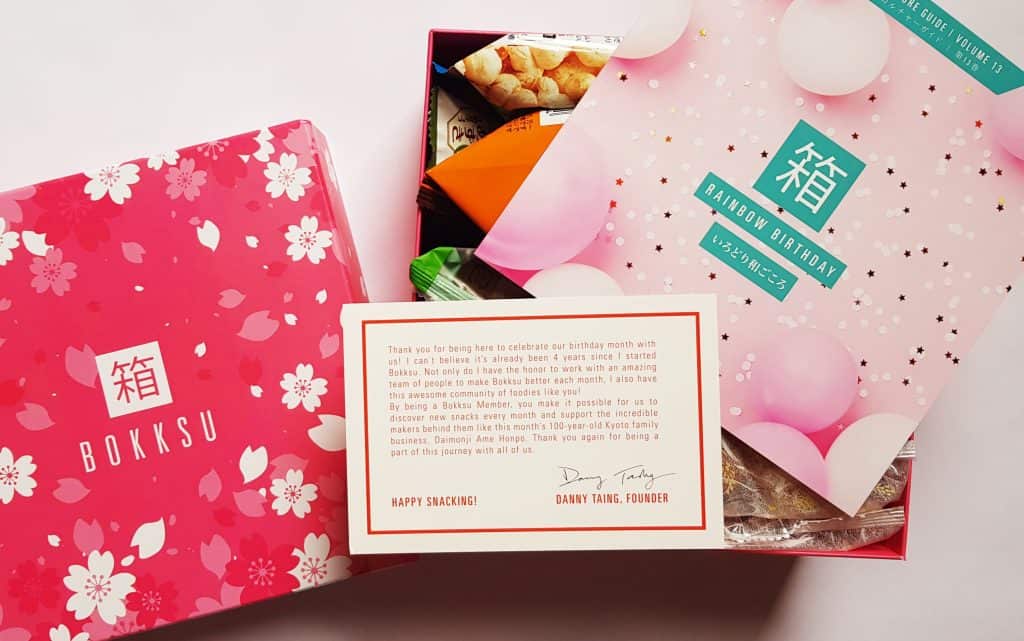 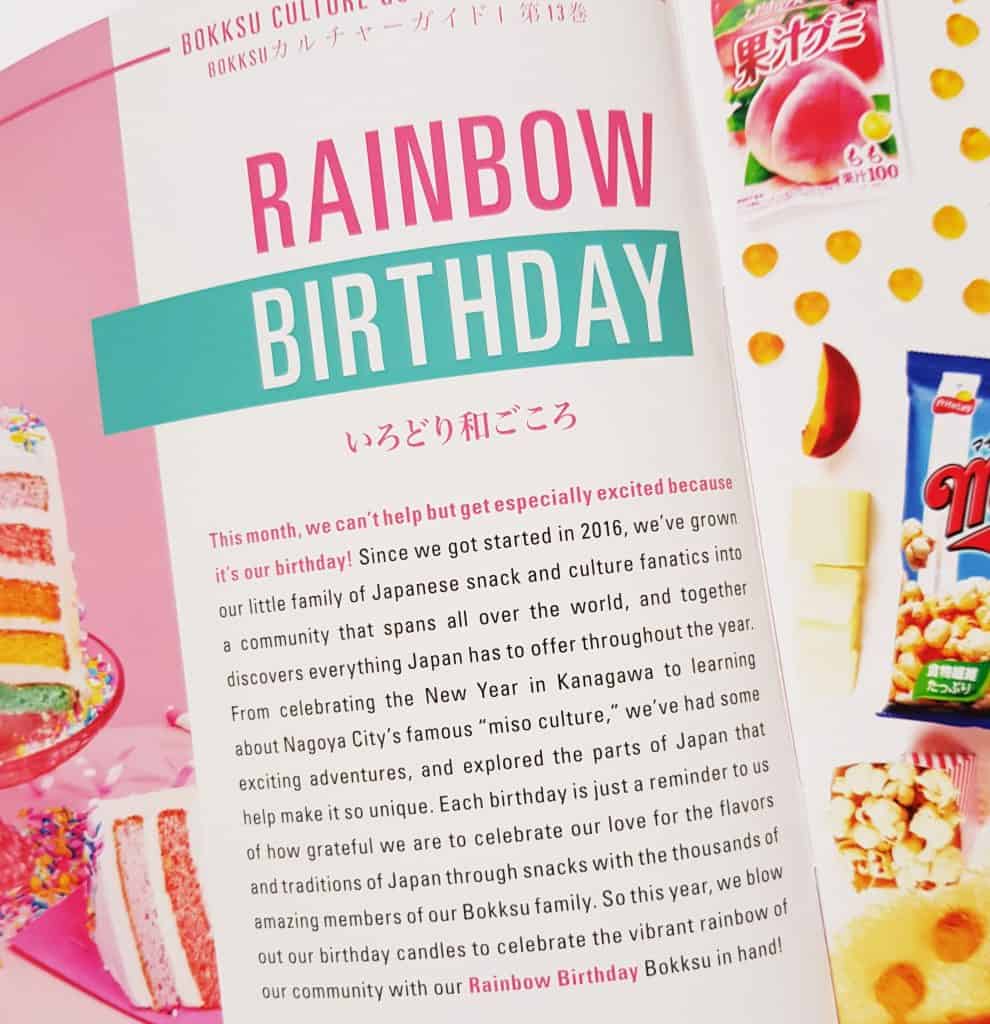 The menu booklet is a unique item itself. 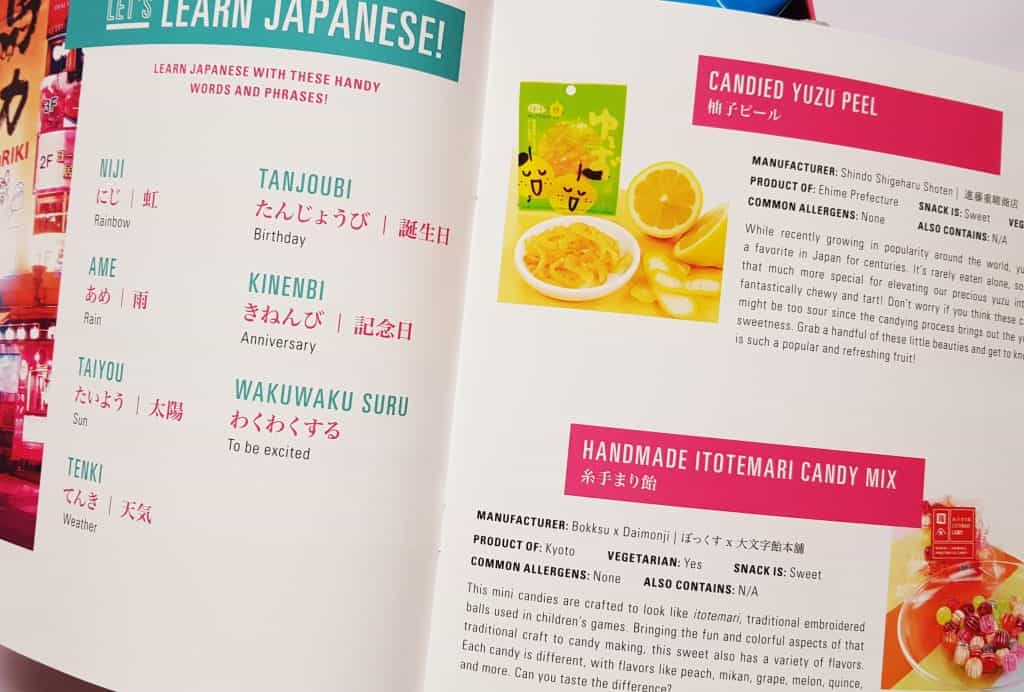 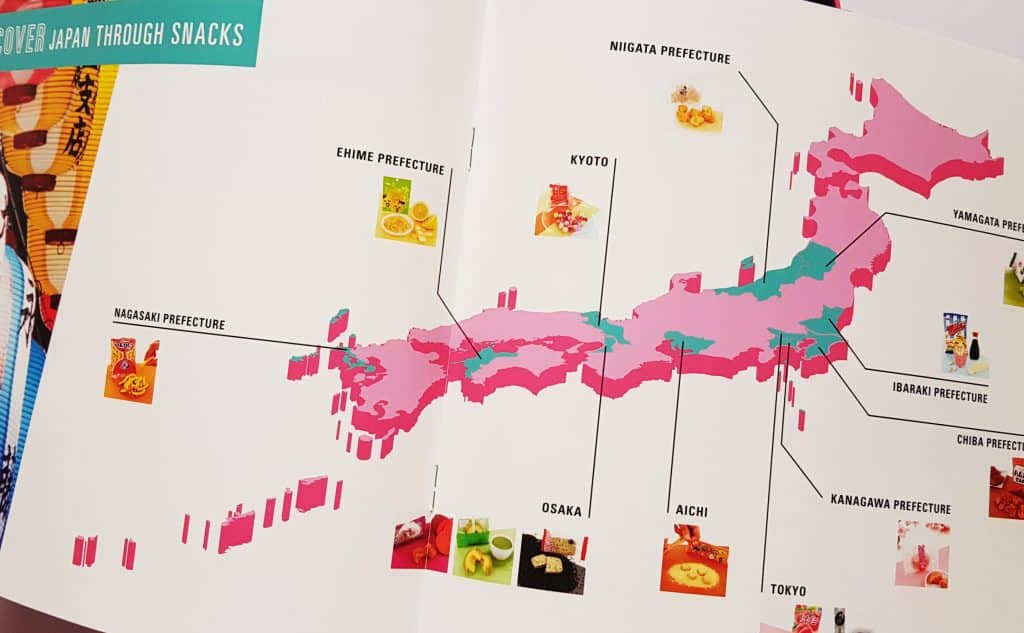 It contains fun Japanese vocabulary, a map showing where your snacks originate, and a nicely detailed menu which includes and allergy guide. 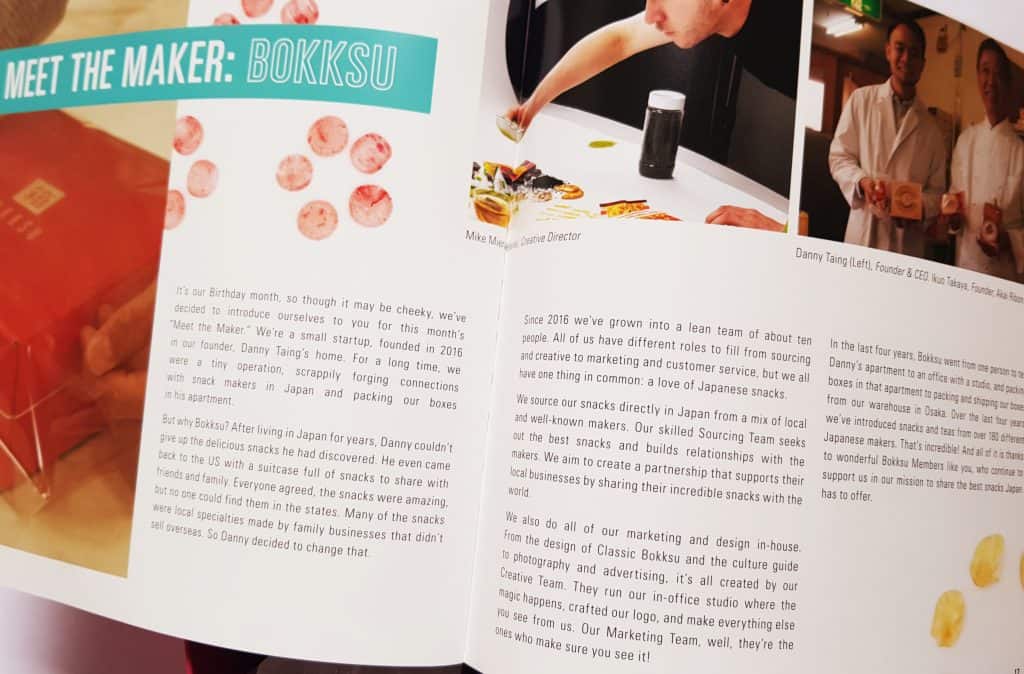 As part of the the celebratin, the  booklet features Bokksu itself in it’s Meet The Maker section. This is a really interesting, it’s fascinating to get a little insight into this lovely company and how it has developed over the past four years.

Now on to the goodies! 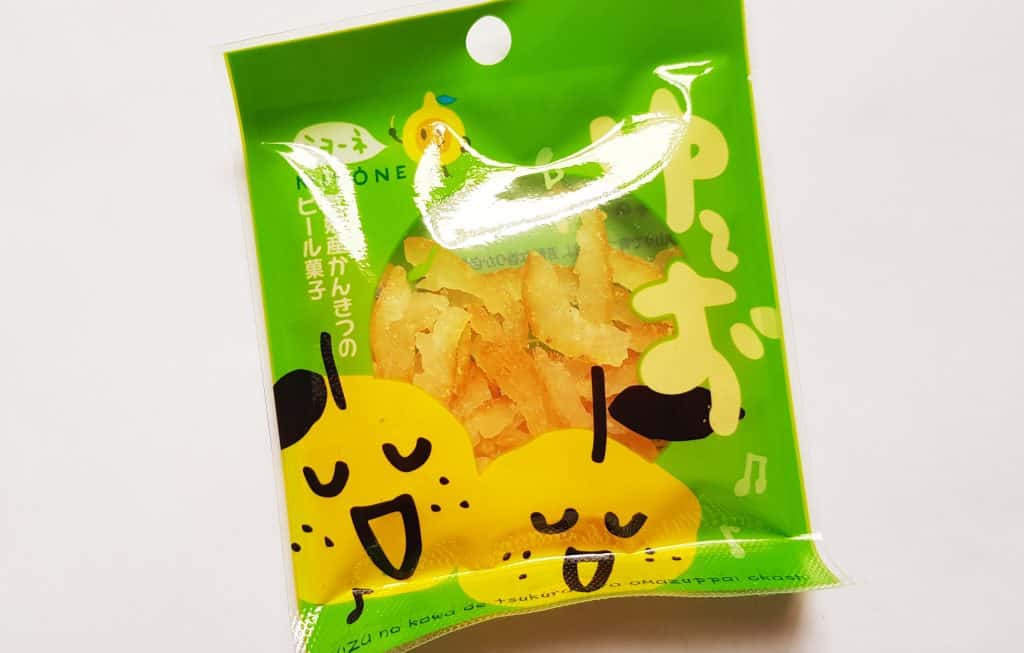 Candied Yuzu Peel. The yuzu is a Japanese citrus fruit, similar to a lemon but with a wonderful fragrant flavour. This candied peel can be eaten as is or used in cooking and baking. 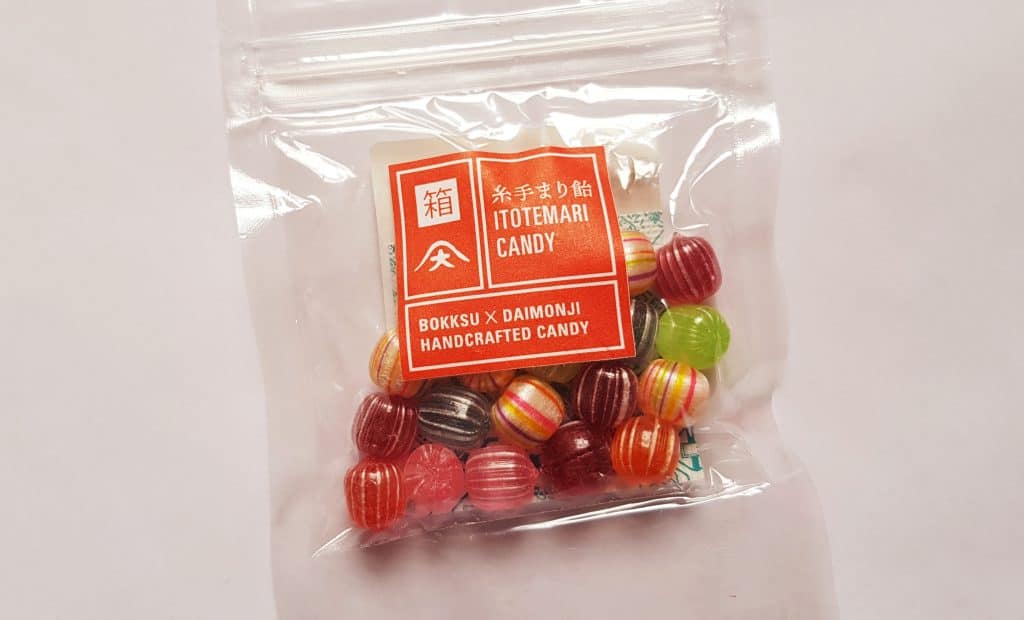 Handmade Itotemari Candy Mix. These hard candies are made by and are exclusive to Bokksu, and there is a different variety every month. This month we have a mix of fruit flavours, and the colourful stripes are made to look like the children’s toy itotemari, an embroidered ball. 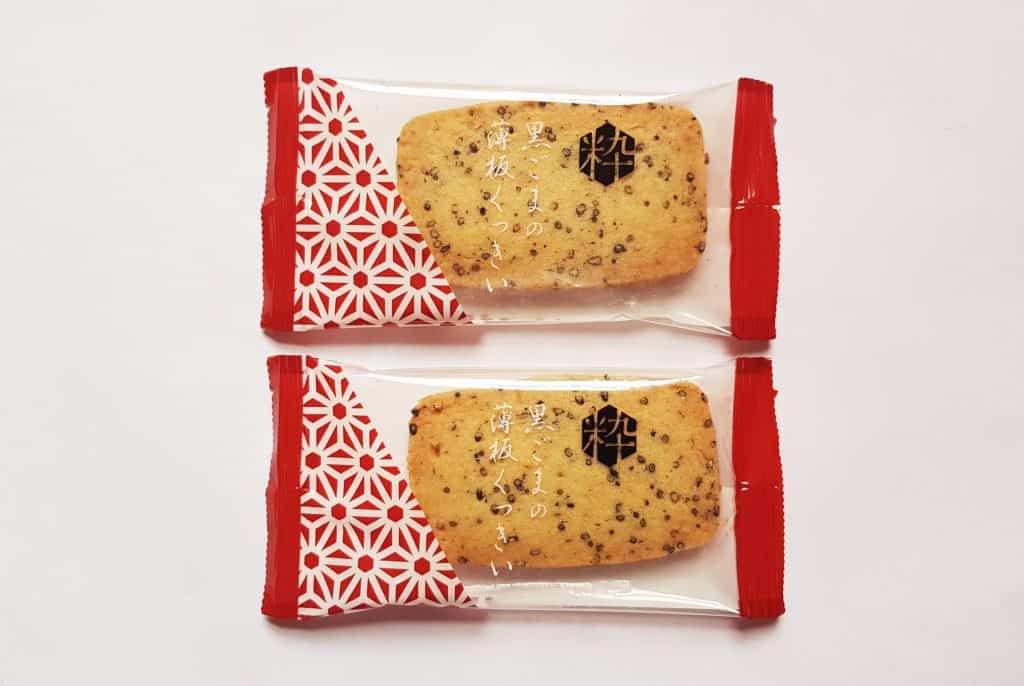 Black Sesame Cookie. Black sesame is a popular ingredient in Japanese desserts, and these cookies have lots inside! The cookie itself if rather like a buttery shortbread, which mied beautifully with the sesame seeds. 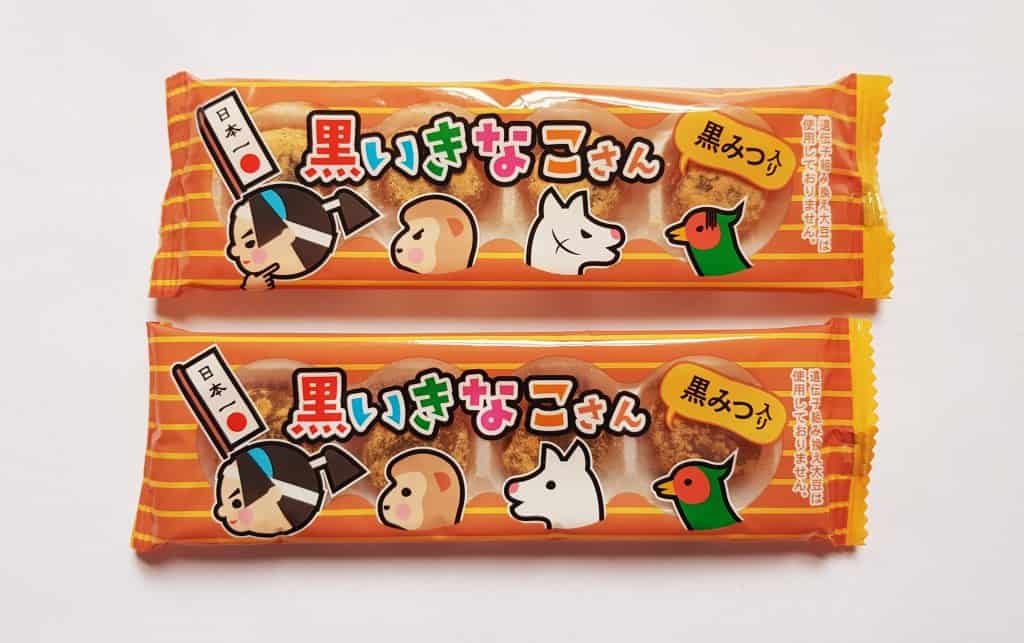 Kuroi Kinako-San Dango Mochi. Mochi are soft and chewy rice cakes, and these are flavoured with traditional black sugar syrup then coated in kinako, roasted soybean powder. This has an amazing nutty flavour, and is incredibly delicious. The packaging shows Momotaro and his friends, characters from Japanese folklore.

Koganeimo Golden Sweet Potato Cake. This soft rich cake is made from sweet potato, and has an incredibly rich flavour. It also contains cinnamon and run for an extra decadent taste! 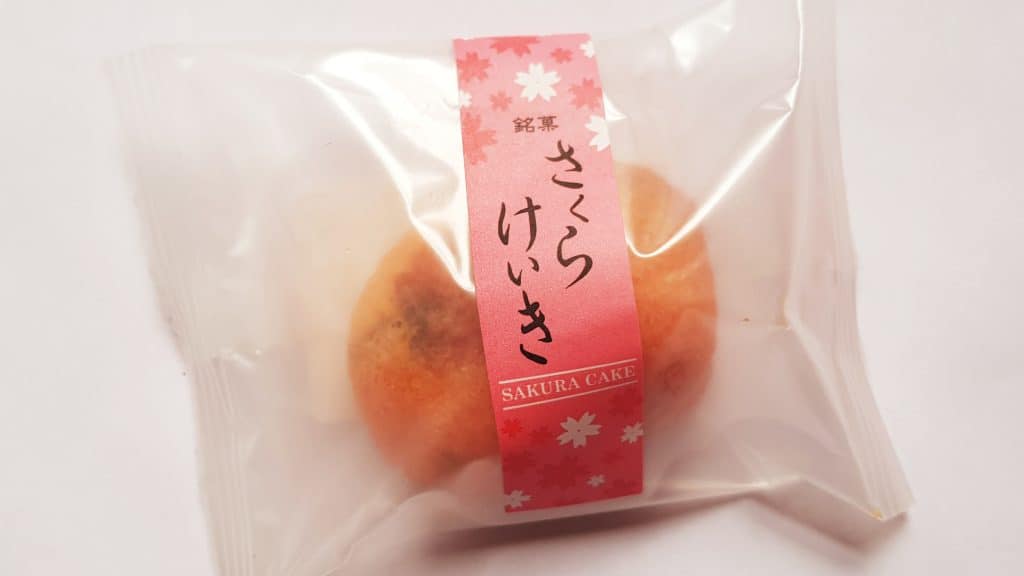 Sakura Cake. Sakura cherry blossom season is nearly over, but this lovely little cake is made with preserved sakura flowers. It has a delicate flavour and a crumbly light texture. 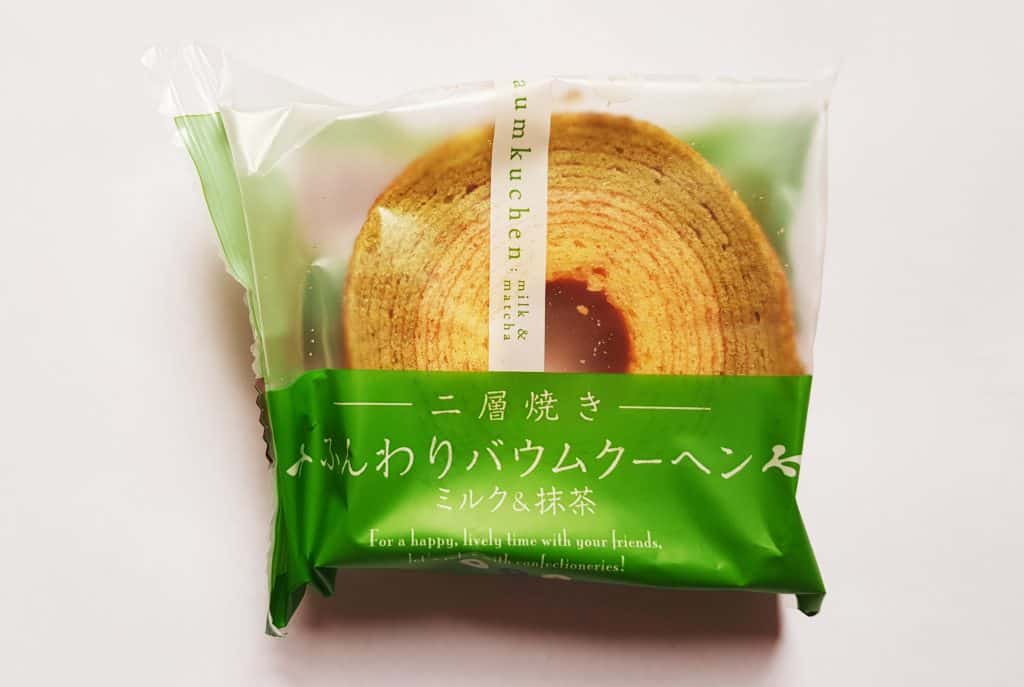 Funwari Baumkuchen: Milk and Matcha. This cake is named for the tree-like rings of the cake. This type originates in Germany, but has become very popular in Japan over the years, and they have put their own unique mark on it by including traditional Japanese flavours such as green matcha tea. 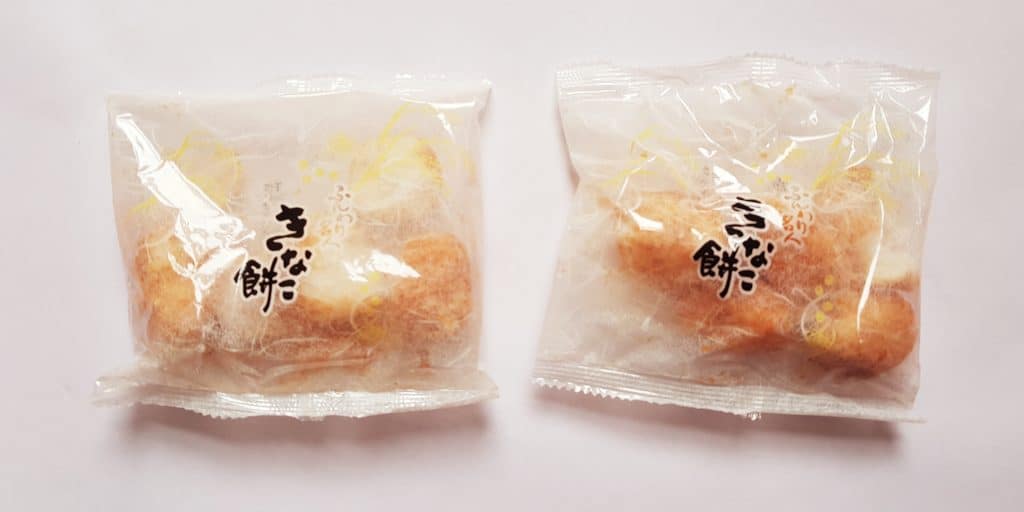 Funwari Meijin Mochi Puffs: Kinako. These are one of my favourite Bokksu snacks ever! They are mochi, but unlike any other. They are made by a secret process making the, crispy and light as air. Bokksu have produced them in several flavours, but these are coated in that rich nutty kinako powder and are absolutely delicious. 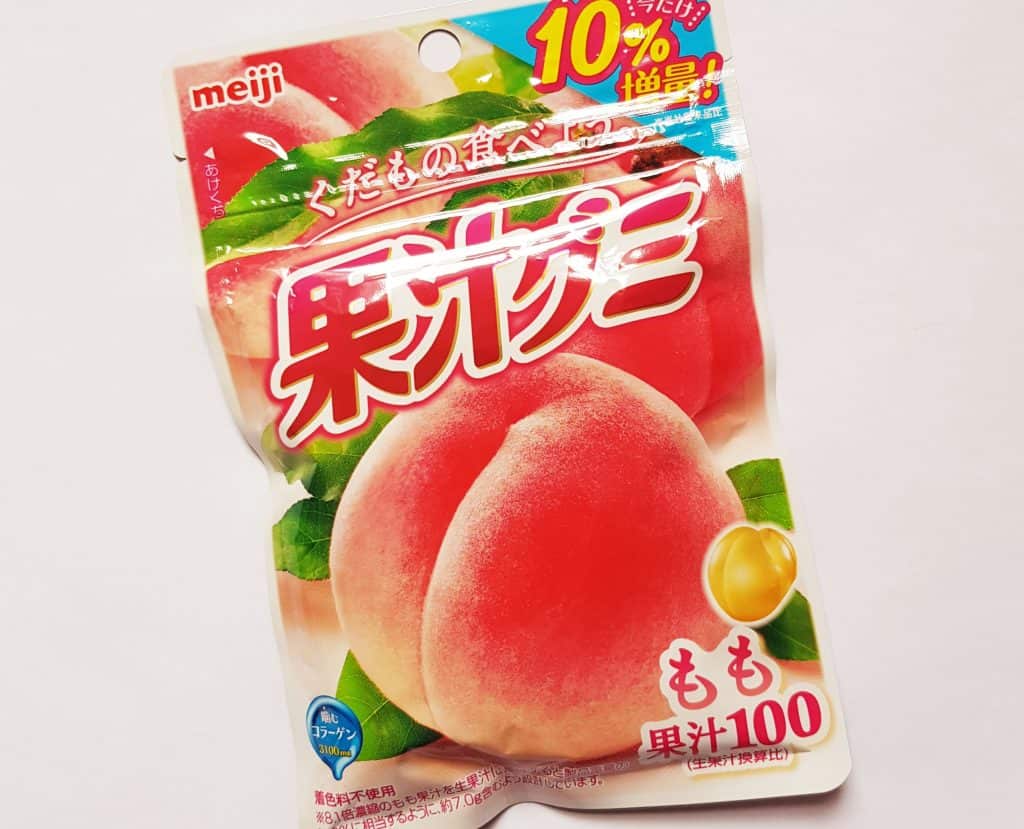 Kaju Hummy: Peach. Peach is another springtime fruit flavour, and these are made from sweet white peaches. The gummies are fruity and yummy, and really do taste very peachlike! 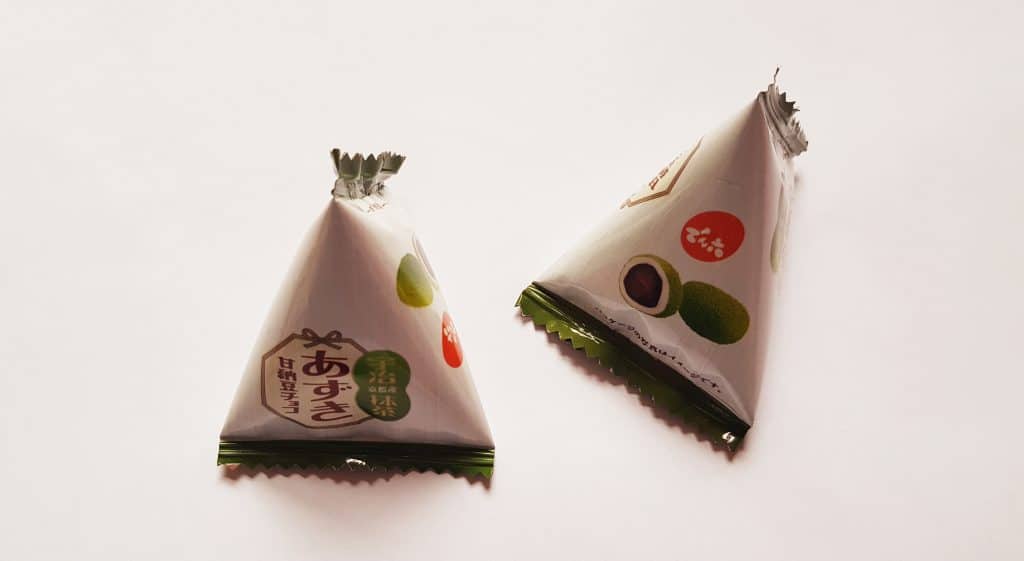 Chocolate Azuki Beans: Uji Matcha. These are a frequent inclusion in Bokksu, and are tiny packs of sugar-preserved azuki beans coated in white chocolate and matcha powder. These flavours are a great combination of the traditional and the modern. 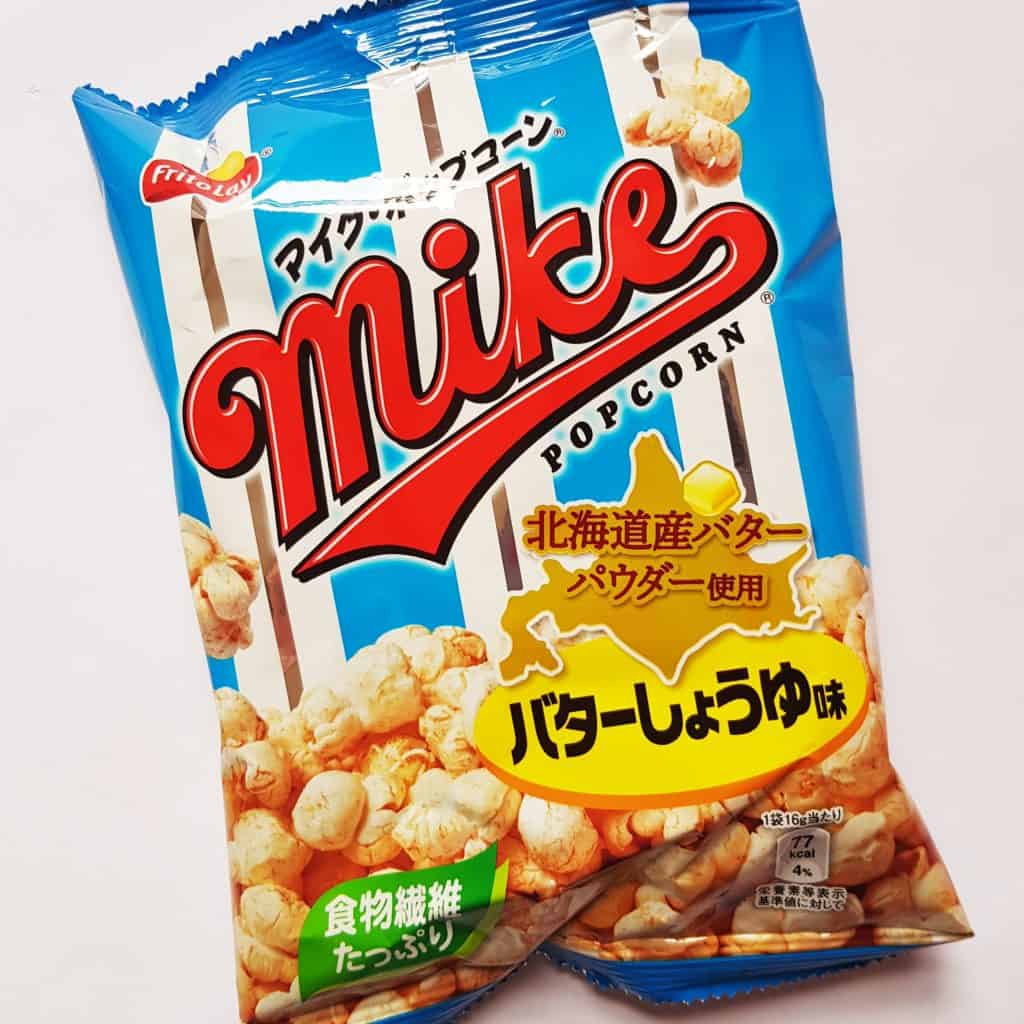 Mike Popcorn: Butter Soy Sauce Flavour. This variety is exclusive to the Japanese market. The butter comes from Hokkaido, which produces Japan’s most quality dairy, and the combination of the creamy butter taste with the soy sauce is delicious. 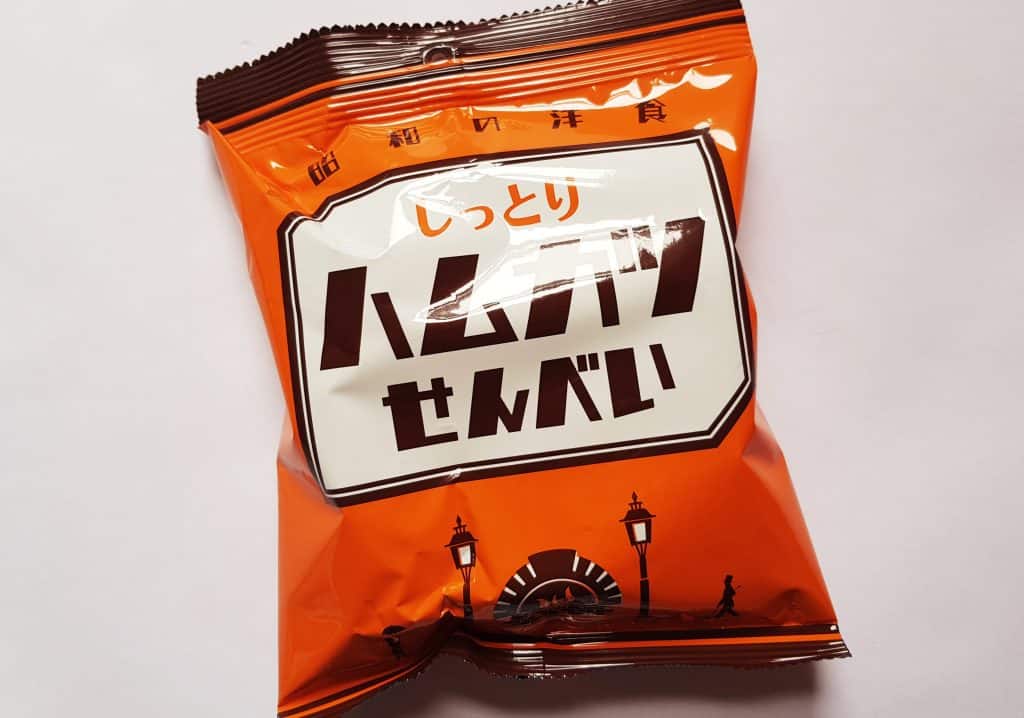 Showa No Yoshuku Shittori Ham Katsu Senbei. These rice crackers are flavoured with the popular Japanese dish hamukatsu, which translates to ham cutlet, a slice of ham coated in breadcrumbs and fried. They have a wonderful strong flavour and are very moreish. 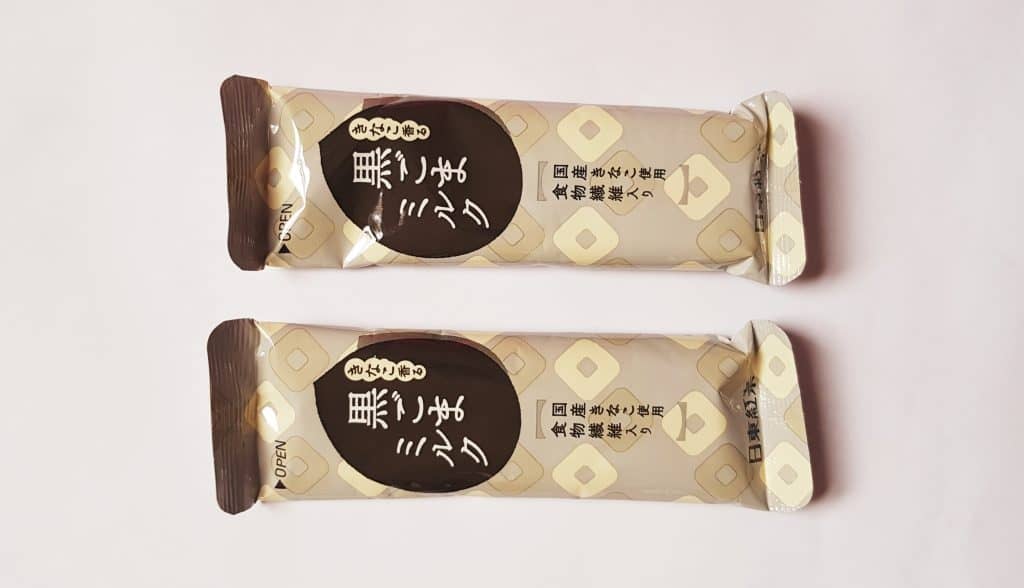 Kinako And Black Sesame Milk Latte. This month’s drink is instant latte sachets, though they are not coffee. Instead they contain ground black sesame and kinako combined with milk powder for an instand creamy, nutty drink. It can be made hot or cold, and the booklet also suggests it can be tried as a pudding flavour! 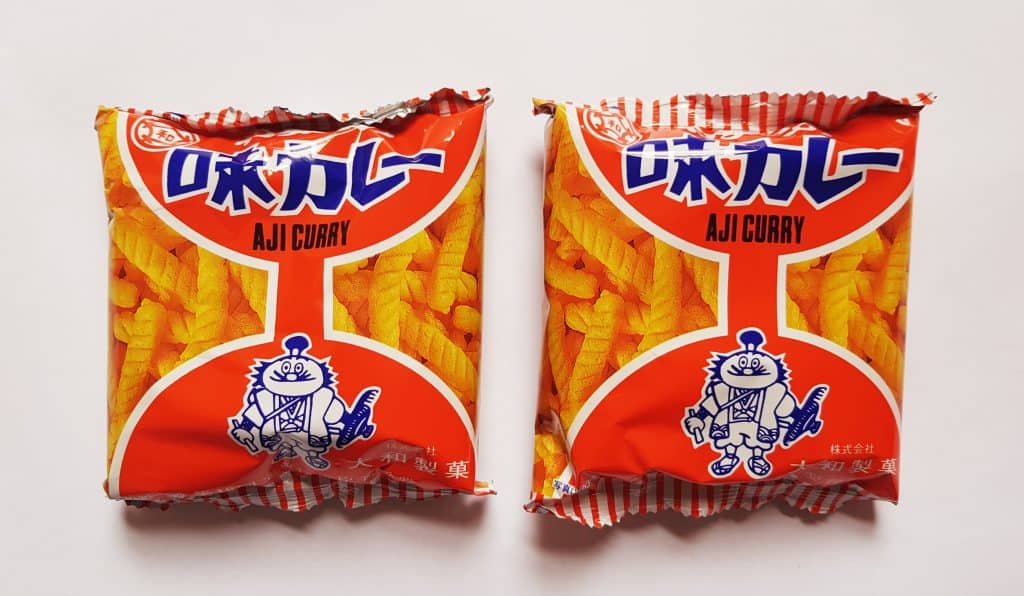 Aji Curry. These are little crunchy puffs made from potato and wheat, and flavoured with a Japanese favourite, curry!

What a fantastic selection to celebrate Bokksu's birthday! I love that kinako is featured several times, as it is a wonderful flavour and unique to Japanese cuisine. There is a nice mix of sweet and savory, with more traditional flavours. There is also a selection of textures, with the various mochi and senbei, and even little cakes showing how Japan has embraced foods from around the world. The limited edition sakura design box is an extra treat, as it's sturdy and attractive enough to be reused. Bokksu always presents a great variety, and whether you already love Japanese snacks or wish to try new things, this is the perfect way!